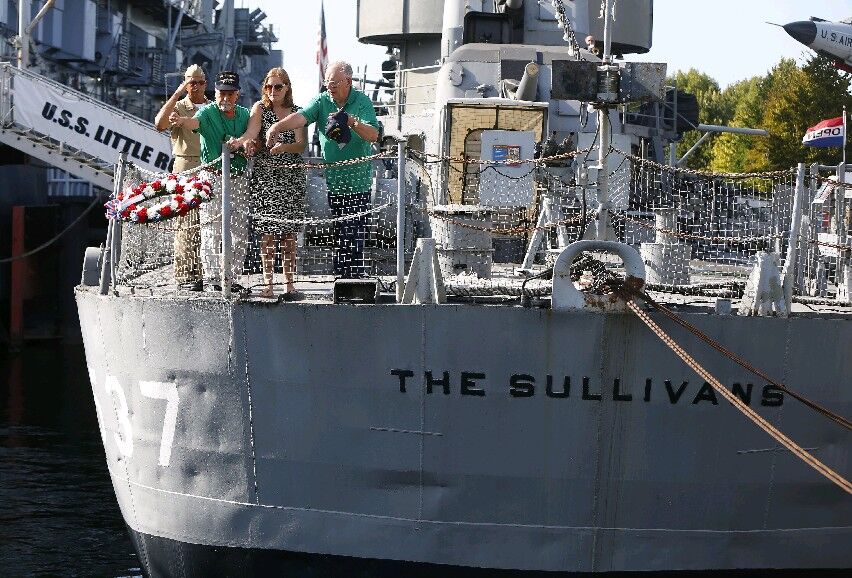 From left to right: Mark Pijacki, Rich Cuttone, Kelly Sullivan, and John Mataka, throw a wreath off the fantail of the USS The Sullivans on Friday during a reunion at the Buffalo and Erie County Naval and Military Park for those who served on the ship. (Mark Mulville/Buffalo News) 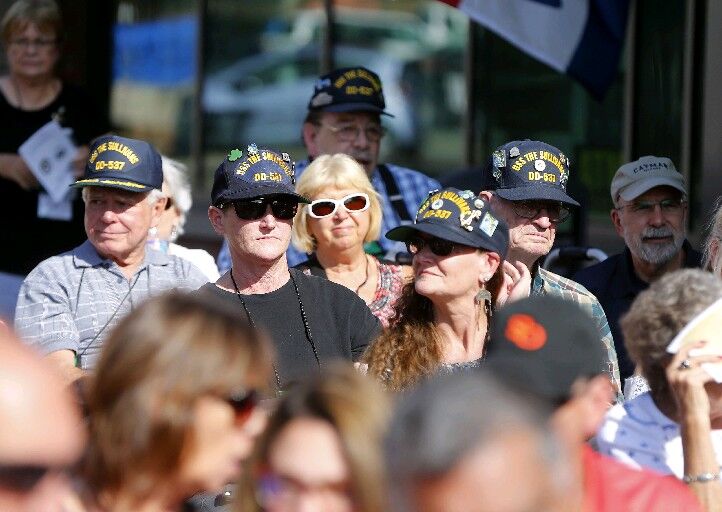 Veterans and their families at the 27th anniversary reunion memorial service of those who served on the USS The Sullivans in Buffalo. (Mark Mulville/Buffalo News) 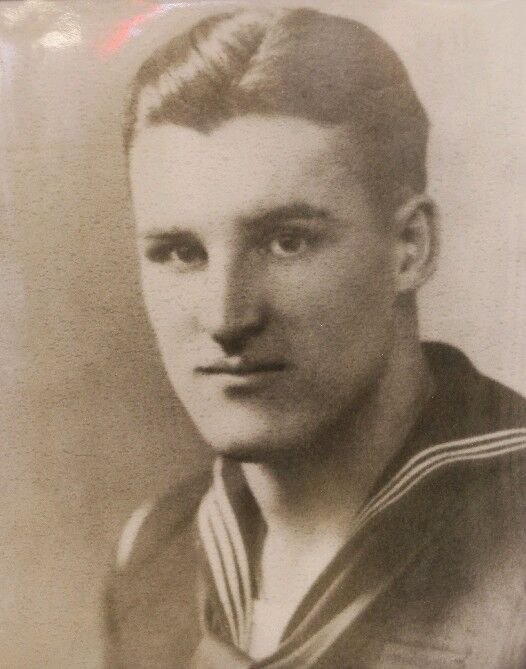 Photo of South Buffalo native Jerry Reilly who died on the USS Juneau during the battle of Guadalcanal along with the five Sullivan brothers. (Mark Mulville/Buffalo News)

Earlier this week Jerry Reilly's 91-year-old cousin sat on the porch of her Old First Ward home the two had shared as children.

She reminisced about the World War II sailor who died 75 years ago with the five Sullivan brothers and nearly 700 other shipmates aboard the USS Juneau.

Betty Barrett did not hold back in sharing Reilly's tough upbringing. She knew it would be tempered by the praise her cousin received at Friday's memorial service on the cobblestone sidewalk next to the USS The Sullivans at Buffalo & Erie County Naval and Military Park.

The story of the Sullivan brothers is well known. From Iowa, they had all enlisted following the Dec. 7, 1941, attack on Pearl Harbor. Despite resistance from the Navy, they were granted their wish to "stick together" and were all assigned to the doomed Juneau.

Hollywood even made a movie, "The Fighting Sullivans," and the decommissioned ship at Canalside bears their name.

Not so well known is the story of their shipmate Jeremiah W. "Jerry" Reilly Jr., the only known sailor from Buffalo to die when an enemy torpedo sank the light antiaircraft cruiser.

Several of Reilly's relatives were the guests of the USS The Sullivans Association, which sponsored the memorial in recognition of the 75th anniversary of Juneau's demise coming up on Nov. 13. Association members in town for a reunion thought it was important for Reilly, a gunner, to be remembered for his bravery at the Battle of Guadalcanal in the South Pacific.

Kelly Sullivan, the granddaughter of Albert Sullivan, paid tribute to all of the sailors lost, but shared a special moment with one of Reilly's cousins. After embracing 80-year-old cousin William Mackey, she told him they shared a bond.

"It's bittersweet. We all lost somebody, but God has brought us all together as a Navy family," said Sullivan, a third-grade teacher in Iowa.

"I just met her and I feel like we are family," Mackey said.

Cousins Kathy Marcinkiewicz and Carol Connors said it was a comfort to know Reilly was not forgotten.

"To think he was just 17 when he left home and joined the service," Marcinkiewicz said. "We're proud of his service."

Hal Burke, who organized the reunion with his wife Nancy, said this was the seventh time the association has met in Buffalo, but the first time Reilly was singled out for special mention among the many who made the supreme sacrifice aboard the Juneau.

On the cousin's porch

Although so much time has passed since their shared childhood, Barrett remembers clearly the trying circumstances of how Reilly and his sister, Edna, came to live at her family's home on the 100 block of O'Connell Avenue. Their mother had died eight days after giving birth to Edna. Their father showed no interested in raising them and instead lived with his own mother a few blocks away.

"Jerry and Edna lived in the upstairs apartment with our grandmother Delia Mackey and when she died, my parents brought them downstairs to live with us," said Barrett, whose three sibling are deceased.

Barrett owns the 1895 house and says it is packed with memories.

Her brother Jack, she said, sometimes gave Reilly a ride on the handlebars to the firehouse on Seneca Street where the boy's father worked.

"Jerry went there to ask his father for money to help support him and his sister. My grandmother was a seamstress and didn't have much," Barrett said.

In his years at South Park High School, Reilly's fortunes improved. A right-handed pitcher on the baseball team, he was gifted with a fiery fastball that helped win the Cornell Cup in 1939. But, Reilly was always overshadowed by the team's left handed star pitcher, Warren Spahn, a year ahead of him.

Spahn, who would also serve in WWII, went on to become a Major League Baseball legend.

"Jerry asked my mother to do up his shirts, wash and press them for the trip. When he went over to the firehouse to ask his father when they were leaving, his father said, 'Oh, I already went.' Jerry was disgusted," Barrett said.

Reilly's father did come through when his son asked him to sign early enlistment papers so he could quit school and join the Navy at 17, a year before America entered WWII.

Reilly was first assigned to the USS Brooklyn but soon after the Japanese attack on Pearl Harbor, he was assigned as a gunner on a new ship, the USS Juneau, which was on the West Coast.

During a visit home, Reilly and his cousin Jack, who had joined the Marines, and a third cousin, John Coyle, who was in the Army, stopped at a relative's home in the recently opened Perry Housing Projects.

"We were one of the first families to move into the Perry Projects and the apartments all had bathtubs. That was something new. My cousins came over to take baths," Mackey said.

About 4 years old at the time, Mackey remembered the visit: "They were in a circle throwing me from one to the other."

He also recalled one of the last letters received from Reilly. It was sent to an uncle, Cornelius Reilly, a Buffalo police officer and the brother of Reilly's father. Written at night from the Juneau's deck, Reilly told of how the moonlight was so bright he could clearly see what he was writing. In the letter, he asked how Spahn was making out. He had gone to the Boston Braves, prior to enlisting in the Army.

The Battle of Guadalcanal, from August 1942 to February 1943, marked the beginning of the Allies' island-hopping strategy to move troops and warplanes in closer range to Japan's homeland.

Thousands on both sides were killed at Guadalcanal, including all but 10 Juneau shipmates from a crew of  700. Just after 11 a.m. Nov. 13, a Japanese submarine launched three torpedoes. The Juneau out-maneuvered two of them, but the third struck the ship in the middle of the port side, where it had been previously damaged.

In an account of the ship's demise penned by Burke of The Sullivans Association, he wrote:

"She disintegrated in a violent explosion ... Because nothing could be seen of the Juneau, the remaining ships sped away without attempting to attack the sub or look for survivors."

But there were survivors,  as many as 140, clinging to rafts blown free of the ship.

"In the water, the surviving men, two-thirds of whom were badly wounded, were choking on oil. By the second day, they attracted sharks.  The sharks would grab a guy and there was nothing they could do to help him," Burke wrote.

Neither Reilly nor the Sullivans were among them.

Reilly's name was put on the "Wall of Missing" at the Manila American Cemetery in the Philippines and he was posthumously awarded the Purple Heart.

"We were all heartbroken when we learned Jerry had died," cousin Betty Barrett said.

In  finishing Reilly's story, the twinkly eyed Barrett mused for a moment on her porch and then confided that there was so much more she could share about Reilly's "sad life," but thought it best to leave it buried in the past.

What she did say was that though Reilly had been denied a full and happy life,  Friday's memorial would have pleased him.

"He deserves to be honored," Barrett said. "He loved the Navy."

Paul E. Lubienecki, 63, admitted harassing and intimidating a WKBW news reporter because he was angry over the victim's reporting on the Catholic Diocese of Buffalo.

The Violence Prevention and Elimination Response, or VIPER, task force has seized 17 guns in Buffalo and Niagara Falls and made 288 arrests between July 7 and July 30.

A Buffalo company selling Molson Juice Beverages has been falsely claiming a connection to the Canadian family famous for Molson Canadian beer, according to the lawsuit.

From left to right: Mark Pijacki, Rich Cuttone, Kelly Sullivan, and John Mataka, throw a wreath off the fantail of the USS The Sullivans on Friday during a reunion at the Buffalo and Erie County Naval and Military Park for those who served on the ship. (Mark Mulville/Buffalo News)

Veterans and their families at the 27th anniversary reunion memorial service of those who served on the USS The Sullivans in Buffalo. (Mark Mulville/Buffalo News)

Photo of South Buffalo native Jerry Reilly who died on the USS Juneau during the battle of Guadalcanal along with the five Sullivan brothers. (Mark Mulville/Buffalo News)