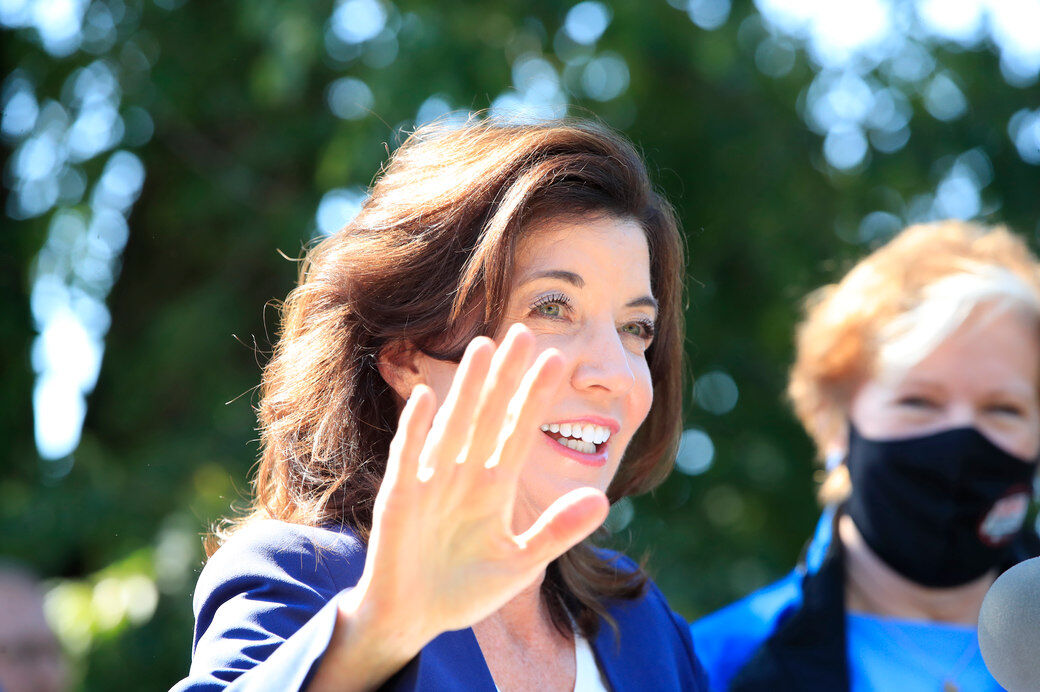 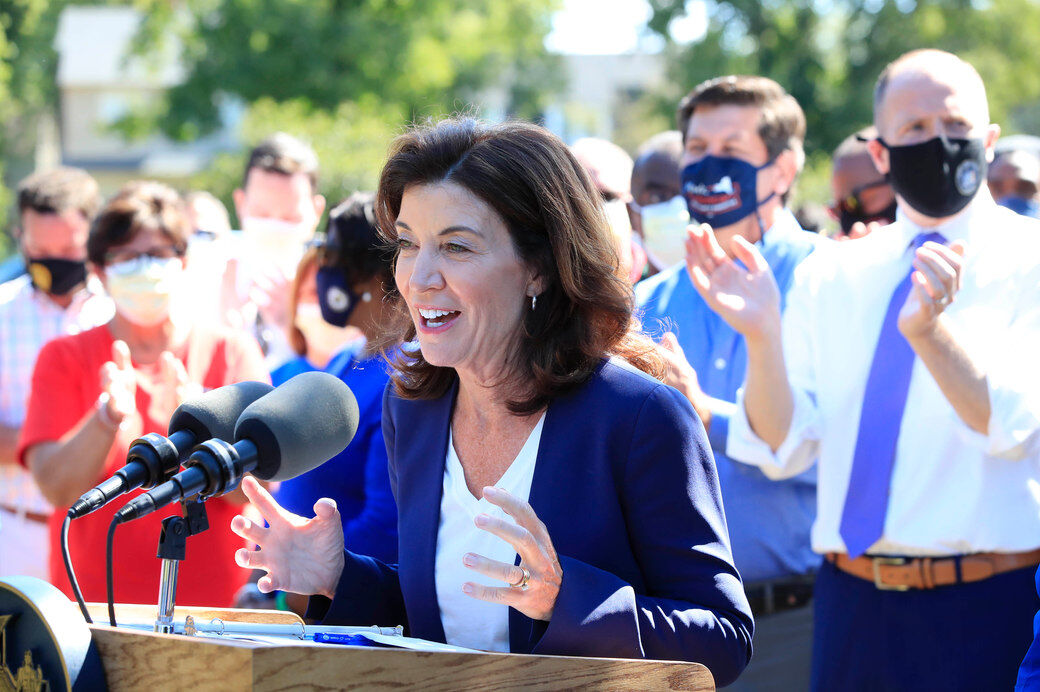 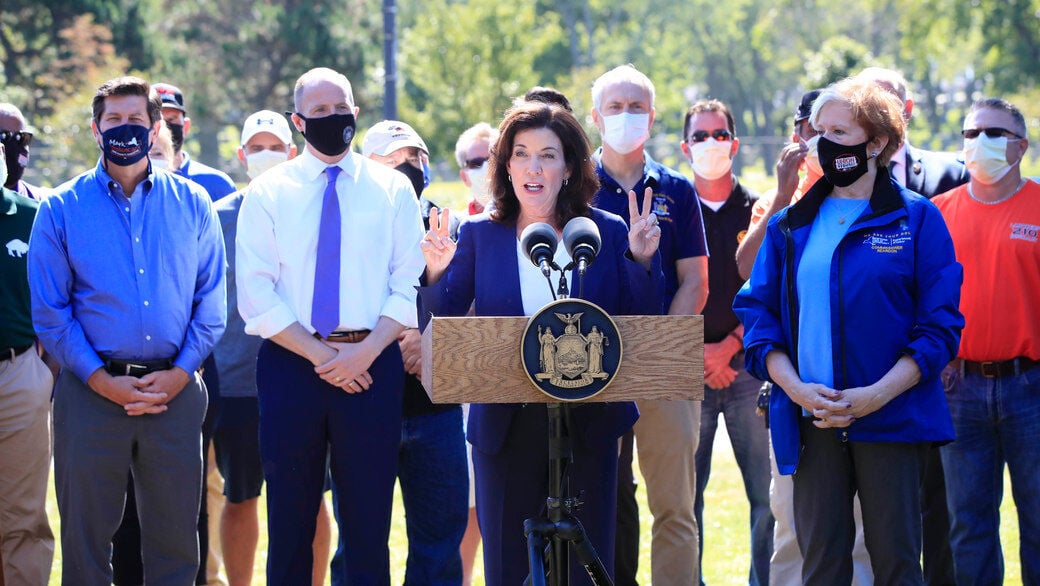 Employers in New York State are now required to implement workplace safety plans, including such measures as face coverings and physical distancing standards, to protect workers from the airborne transmission of Covid-19.

It marks the first time that the state’s Hero Act, a law adopted in May to provide greater protections to workers, will be used to combat the highly contagious communicable disease, according to Gov. Kathy Hochul.

She announced that the state health commissioner determined the state's Health and Essential Rights Act should apply to the virus.

"While we continue to increase our vaccination numbers, the fight against the Delta variant is not over, and we have to do everything we can to protect our workers," Hochul said. "This designation will ensure protections are in place to keep our workers safe and support our efforts to combat the virus and promote health and safety."

The state Department of Labor, with assistance from the Health Department, developed the airborne infectious disease exposure prevention standard, plus model plans that can be used for different industries.

Why employers aren't rushing to require workers to get Covid vaccines

Most local employers, outside of the health care industry, are holding back on mandating vaccines, even though the law generally allows them to.

Employers can either adopt a state's safety plan or craft their own, but they must comply with Hero Act standards, Hochul said. Information on the standard and model templates are available at the Labor Department’s website.

A number of organized labor officials said Hochul’s announcement represented an important step in protecting workers from the virus.

The virus continues to infect thousands of people across the country, and figures released Monday by the state Health Department make it clear that Covid-19 remains a menace in the state.

In the five-county Western New York state-designated Covid-19 region, the seven-day positive test rate for the virus reached 4.23%, compared with the statewide average of 3.28%, according to the Health Department.

When compared to the nine other regions in the state, Western New York had the fourth lowest average rate. New York City was the lowest at 2.37%. The North Country was the highest at 5.34%.

Agree or disagree with his position, Adams’ perspective is rooted in real policy experience and medical authority – and that has value.

In the Western New York counties, Niagara had the highest positivity rate at 4%, and Allegany County had the lowest, 2.2%. The region’s other counties, Erie, Cattaraugus and Chautauqua, had rates of 3.7%, 3.5% and 2.9%, respectively.

Statewide, 26 people died from Covid-19 on Sunday, but none from this region, according to the state. Since the pandemic started, 55,654 people have perished from the virus in the state, according to federal statistics.

In a tweet Monday, Erie County Executive Mark C. Poloncarz said there had been a slight increase of Covid-19 hospitalizations – two – in the county, raising the total to 106. Forty-nine percent of those hospitalizations, he said, involved patients 64 years of age or younger.

Twenty-one of the 106 patients were in intensive care units and 17 were “on airway assists,” Poloncarz added.

Acknowledging some people still contract the virus after getting the vaccine, the physicians and organizations pointed out that there are “either no symptoms or very mild symptoms” among the vaccinated who “are much less likely to be hospitalized or die.”

On vaccine safety concerns, they said no shortcuts in development of the vaccine were taken and safety was not compromised.

“In the history of vaccine research, most vaccine side effects appear within a few weeks and almost all appear within six months," according to the statement. "We now have data for well beyond six months for people who have received the Covid-19 vaccines, and it continues to show they are extremely safe.”

On whether the vaccine impacts pregnancy, the Working Group stated, there is “evidence that the Covid-19 vaccines are safe during pregnancy,” and pointed out that a Covid-19 infection during pregnancy “can cause poor outcomes for moms and newborns.”

The statement also addressed fertility concerns, saying there is no evidence the vaccines impact reproduction.

On why people should continue to wear masks, their statement offered a comparison to littering.

“Wearing a mask will protect you," they said in their statement. "It will protect people around you. And the more people who do it, the more we protect the community. This is similar to littering. If one person litters, no one notices the impact. If many people litter, it creates a problem for everyone.”