Erie County will soon turn 200 years old, after being separated from Niagara County in 1821. There are few events here that match the spectacle seen when the county was only three years old, and the Village of Buffalo had only about 2,000 residents.

Local papers were filled with dramatic versions of testimony from the trial during the spring of 1825.

“It is, perhaps, scarcely possible, in all the variegated annals of crime,” wrote the Buffalo Journal at the height of the trial, “to find a parallel in atrocity, to the case of murder, and the circumstances connected with it, which came up before the Circuit Court, held in this village last week.”

When pieced together, the testimony told the story of John Love, joining his friends the Thayer Brothers, in the butchering of some hogs at the Town of Boston home of Israel Thayer on a December night. It was the last time anyone was to see Love alive.

The Black Rock Gazette called Love “an Irishman and a sailor,” who spent summers on Lake Erie and winters with the brothers whom he had lent $275.

Shortly after that last sighting, the brothers were seen riding Love’s horse, wearing his clothes, and freely spending money. After passing a forged document purported to be Love’s, a search was made, and Love’s body was found in a shallow grave near Israel Thayer’s home.

The execution of the three Thayer Brothers was Buffalo’s only ever public execution.

“The three Thayers, who murdered John Love, are now no more; having been executed yesterday, agreeably to the sentence of the Court, about three quarters past 1 o’clock PM. It was nearly twelve when the prisoners left the gaol. They were dressed in the usual manner of malefactors, with white shrouds and caps. They were escorted to the gallows, erected at the west part of the village, near the Black Rock road, by the rifle company: The music playing a death march.”

That “west part of the village” was the west end of what is now Niagara Square. Today’s Niagara Street was then “the Black Rock road.”

Sometime after the infamous gallows were taken down, Judge Samuel Wilkeson—the father of Buffalo and the man who built Buffalo Harbor, securing the site as the Erie Canal Terminus—built his house on the spot.

In 1929, with the old mansion cleared, work began on new Art Deco Buffalo’s city hall on the site. The scaffolding upon which the Thayer Brothers were publicly hanged once stood in the same place where the steps of city hall stand today. 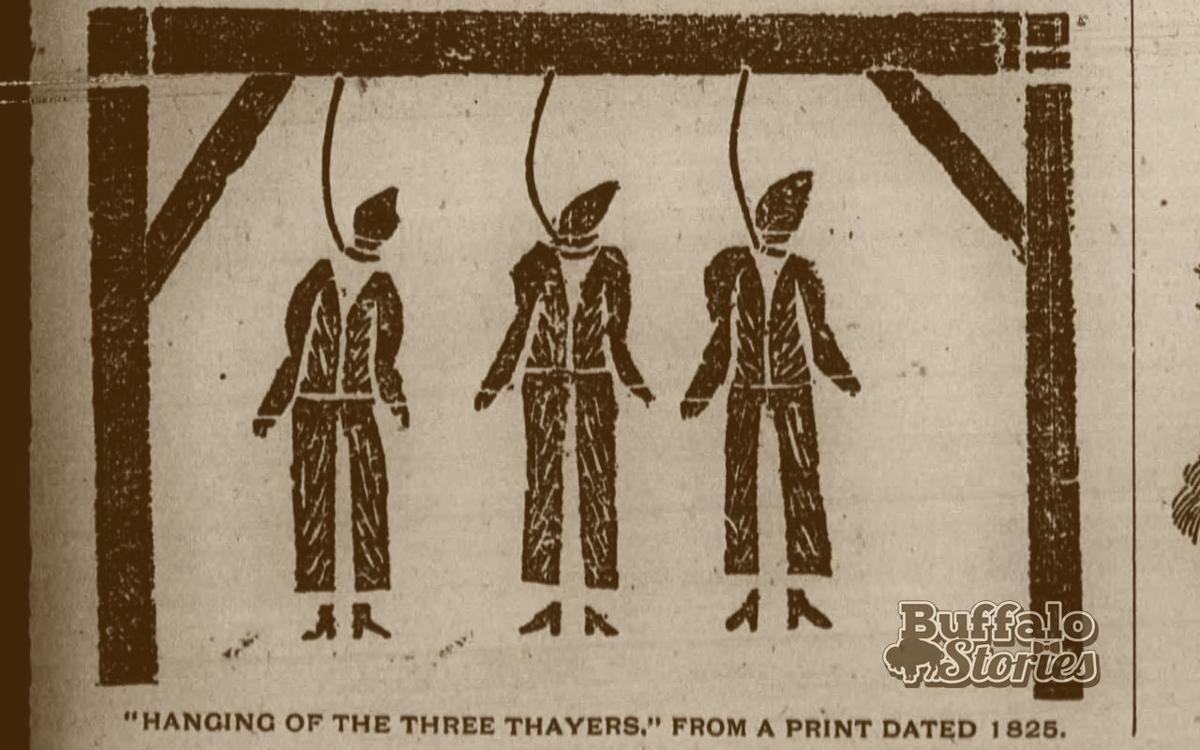 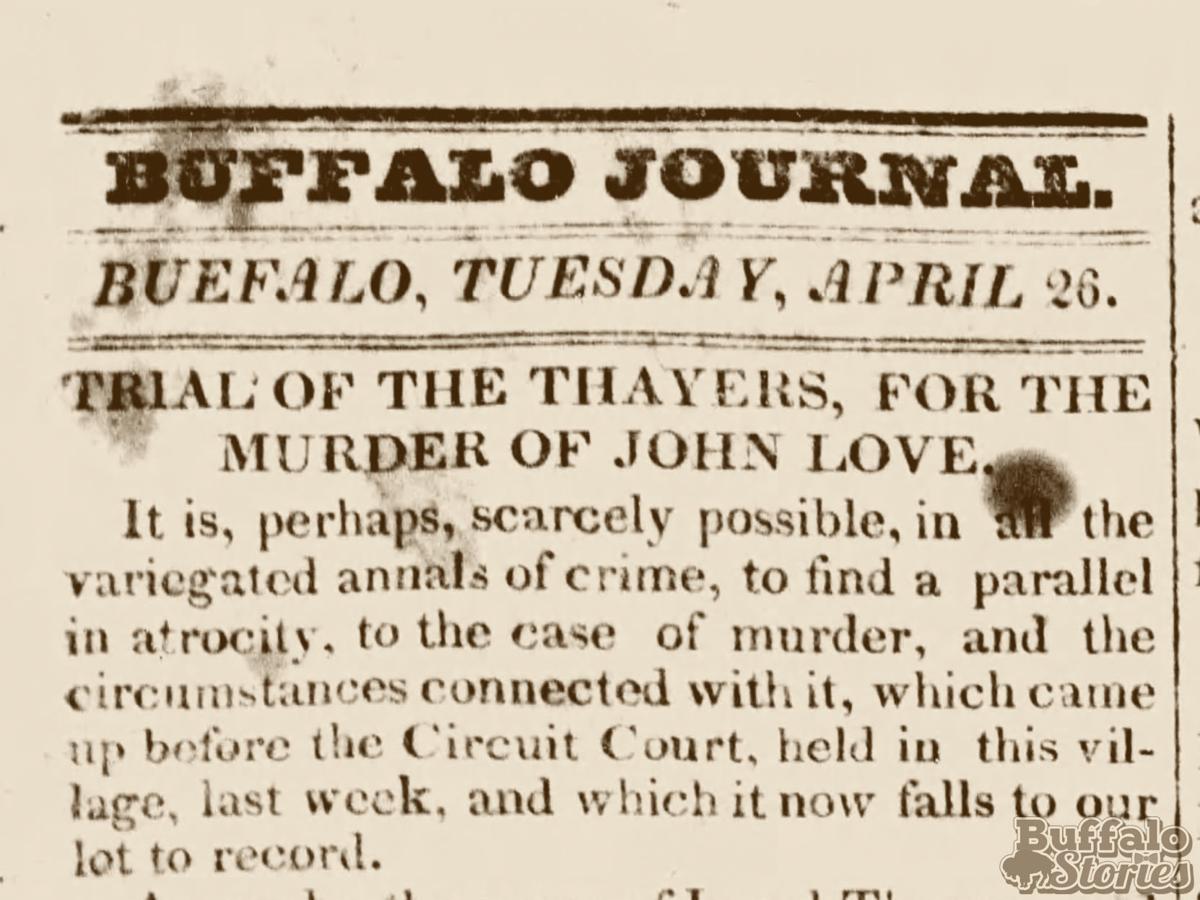 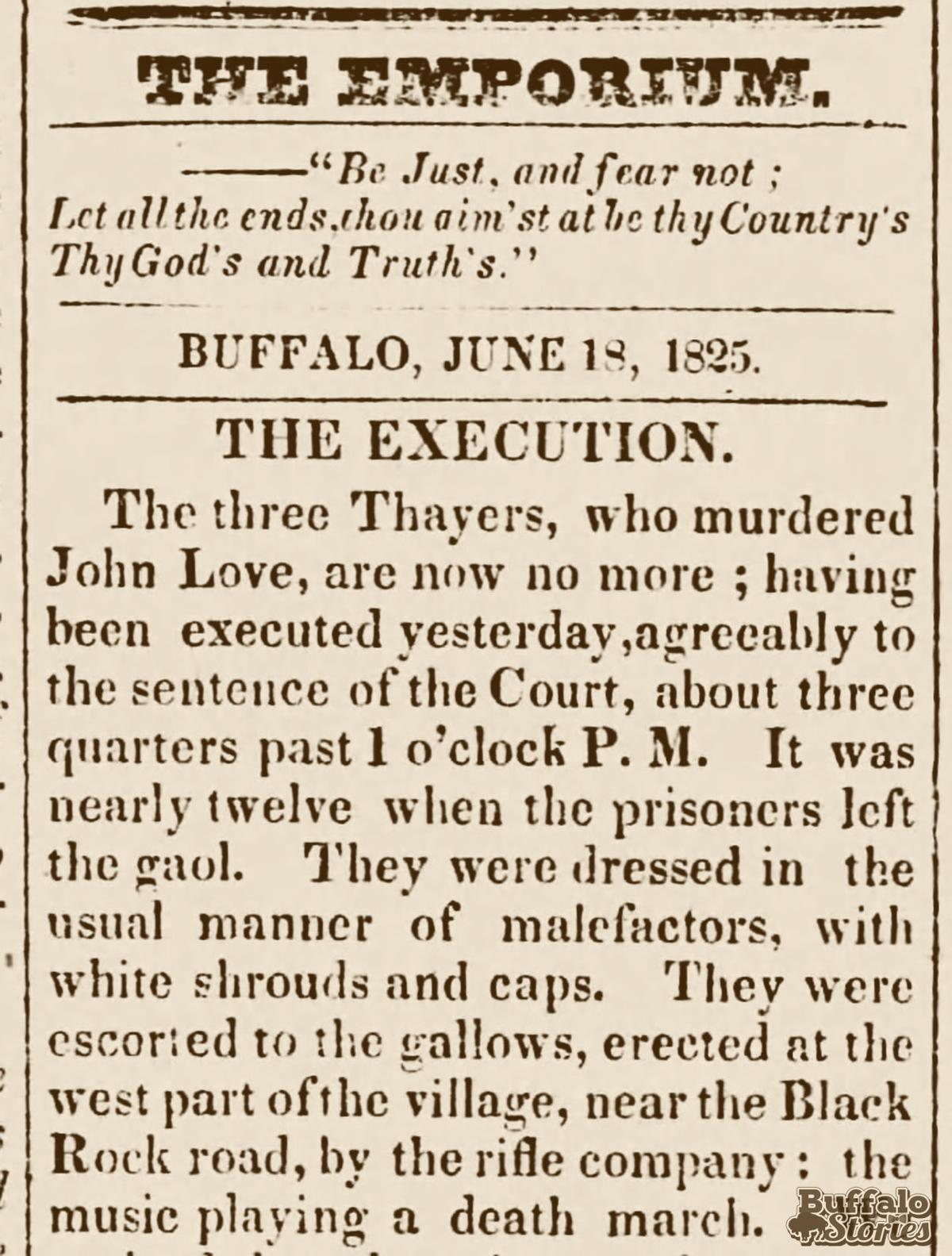