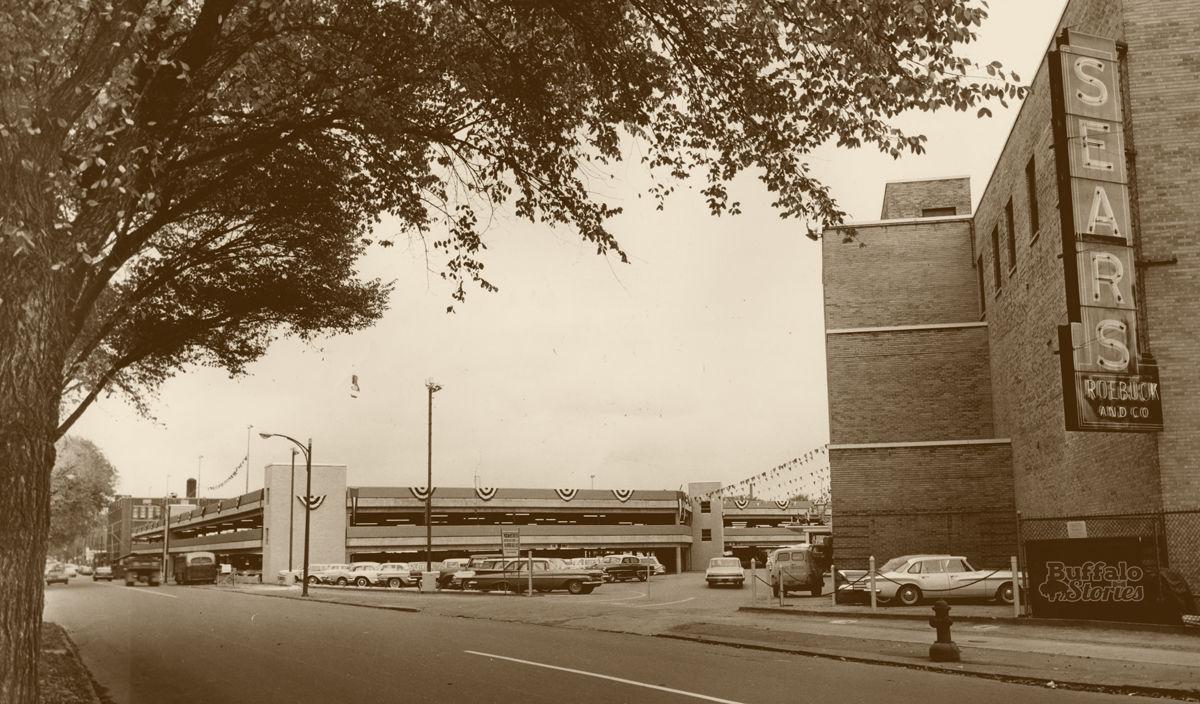 The Jefferson Avenue side of Buffalo's original Sears store, at the corner of Main and Jefferson. 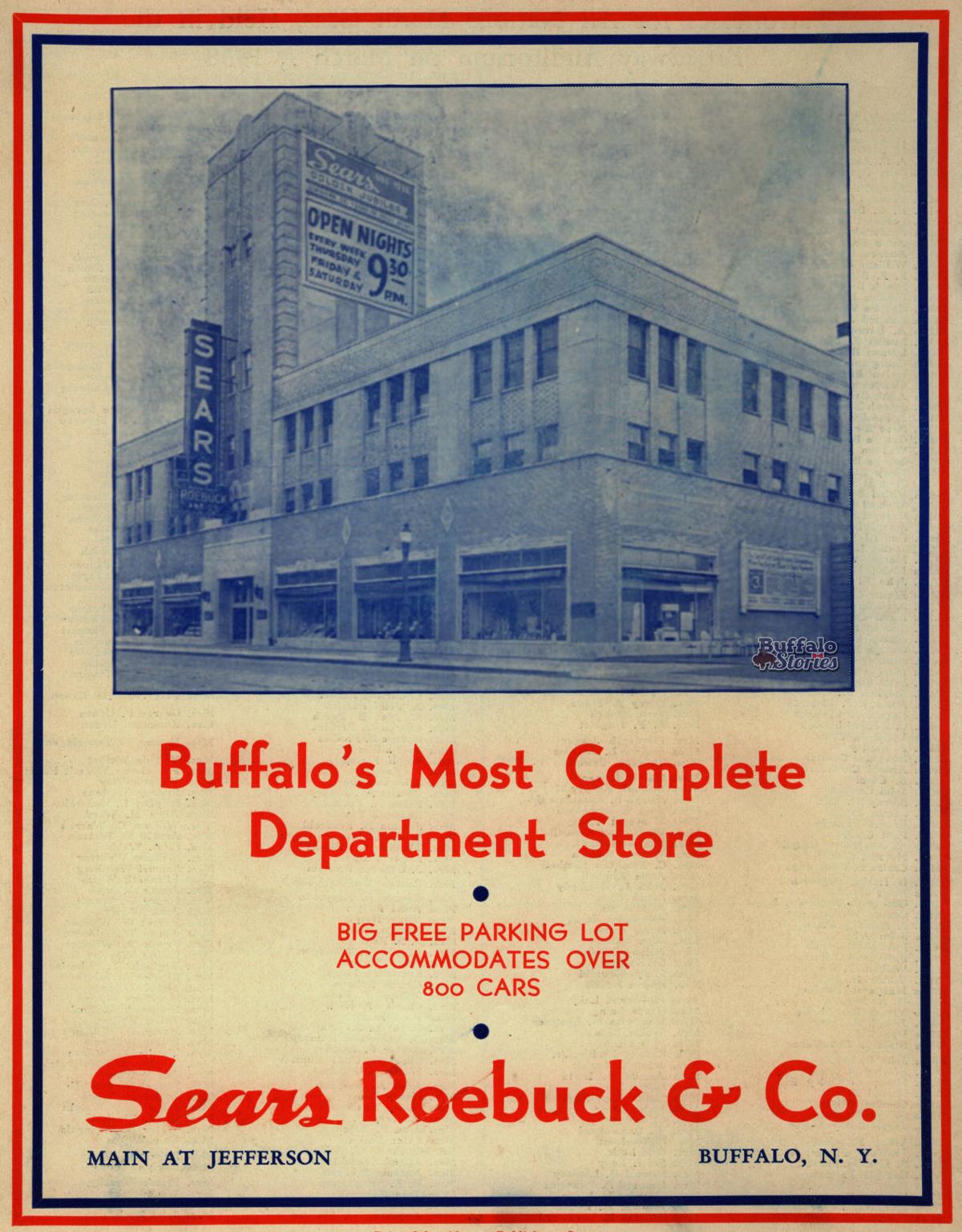 Sears, Main and Jefferson, 1936. The building is now part of the Canisius College campus. 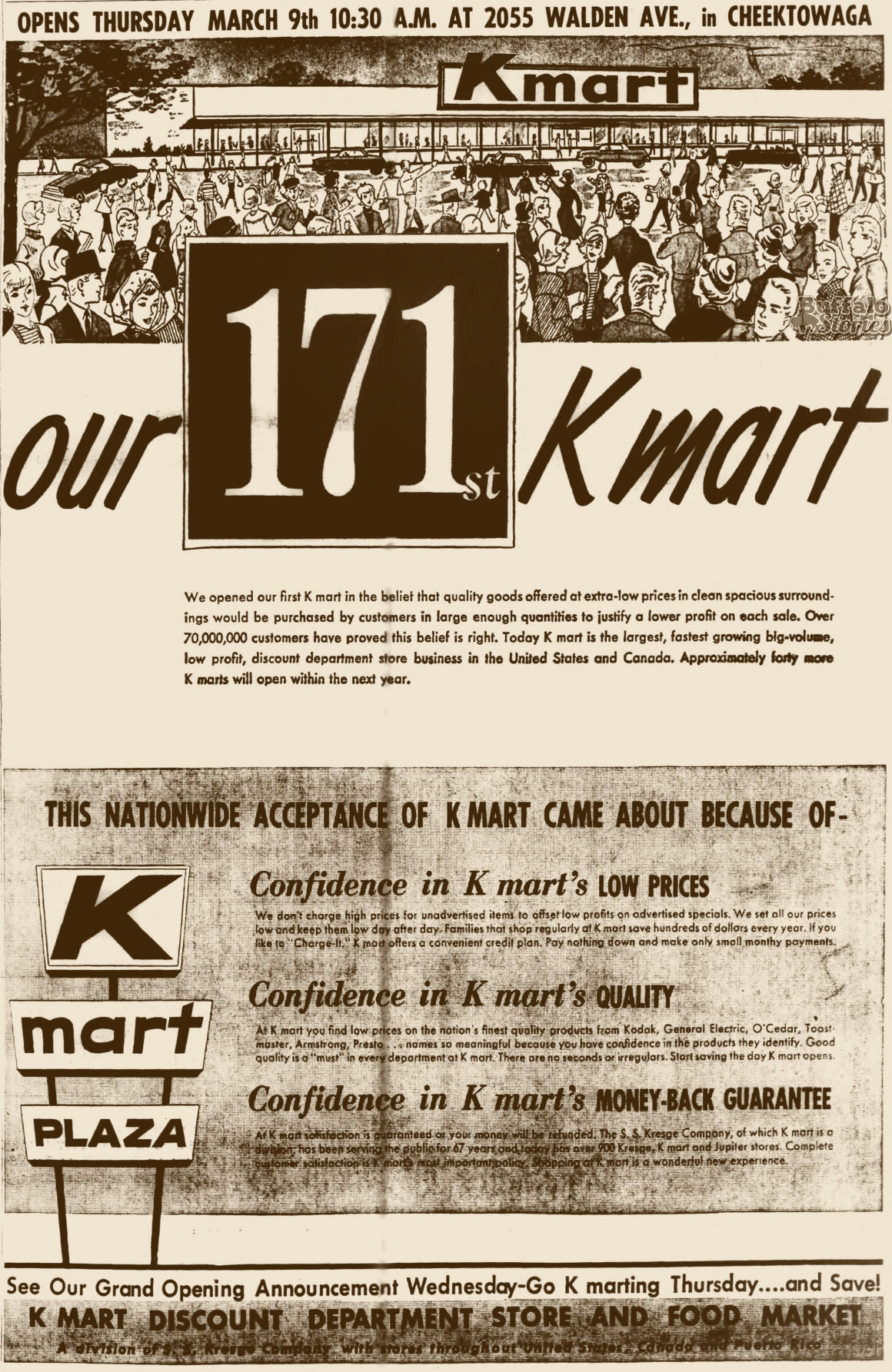 After a combined 140 years on the Western New York retail scene, the news looks bleak for fans of Kmart and Sears.

As Samantha Christmann reported in The News in November, the last area Sears store in the McKinley Mall and the three remaining Kmarts (in Jamestown, Wellsville and on Hertel Avenue) are all candidates for another round of store closings that come as the retailer tries to emerge from bankruptcy.

When Sears and Kmart merged in an $11 billion deal announced in 2004, two long-standing fixtures on the Western New York retailing scene came together.

Western New Yorkers have made Kmart a part of their Christmas shopping routines since the first store opened here on Walden Avenue in 1967. Within a year, there were Kmart locations in Orchard Park (now the site of Lowe’s and Tops), Niagara Falls Boulevard (now the site of the Christmas Tree Store and Old Navy), and the corner of Military and Packard roads in Niagara Falls.

In 1999, there were eight Kmart locations in the Buffalo area, including one at the corner of French and Transit, on Ridge Road in Lackawanna, South Park Avenue in Hamburg, and Transit Road in Amherst.

It was just before Christmas 90 years ago that Sears & Roebuck bought the five acre site of the Carnival Court amusement park at Main and Jefferson for its first Buffalo store. That original Sears store and the attached parking ramp are now a part of the Canisius College campus.

About a dozen Sears locations have come and gone in the Buffalo area through the years. In the 1930s, Sears built in busy neighborhood shopping districts. The second Sears location in Bufffalo was at Seneca and Cazenovia in South Buffalo, followed by another at Broadway and Fillmore.

The original Main Street location closed in 1980 as Sears eventually moved all of its stores into shopping malls.

The retailer was an original anchor in the Eastern Hills Mall, closing this month after 46 years there. The Thruway Mall Sears moved to the Walden Galleria when that mall opened in 1989.

The Galleria and Boulevard Mall locations closed in 2016. The Southgate Plaza Sears moved into the McKinley Mall when it opened in 1985. That store, which traces its roots back the corner of Seneca and Buffum streets in the 1930s, is Buffalo’s last remaining Sears. For now.

We knew only that after the Diocese of Buffalo bought the building, the mural had disappeared. That made us sad. We had already lost our jobs. Must we lose our history, too?

The Jefferson Avenue side of Buffalo's original Sears store, at the corner of Main and Jefferson.

Sears, Main and Jefferson, 1936. The building is now part of the Canisius College campus.