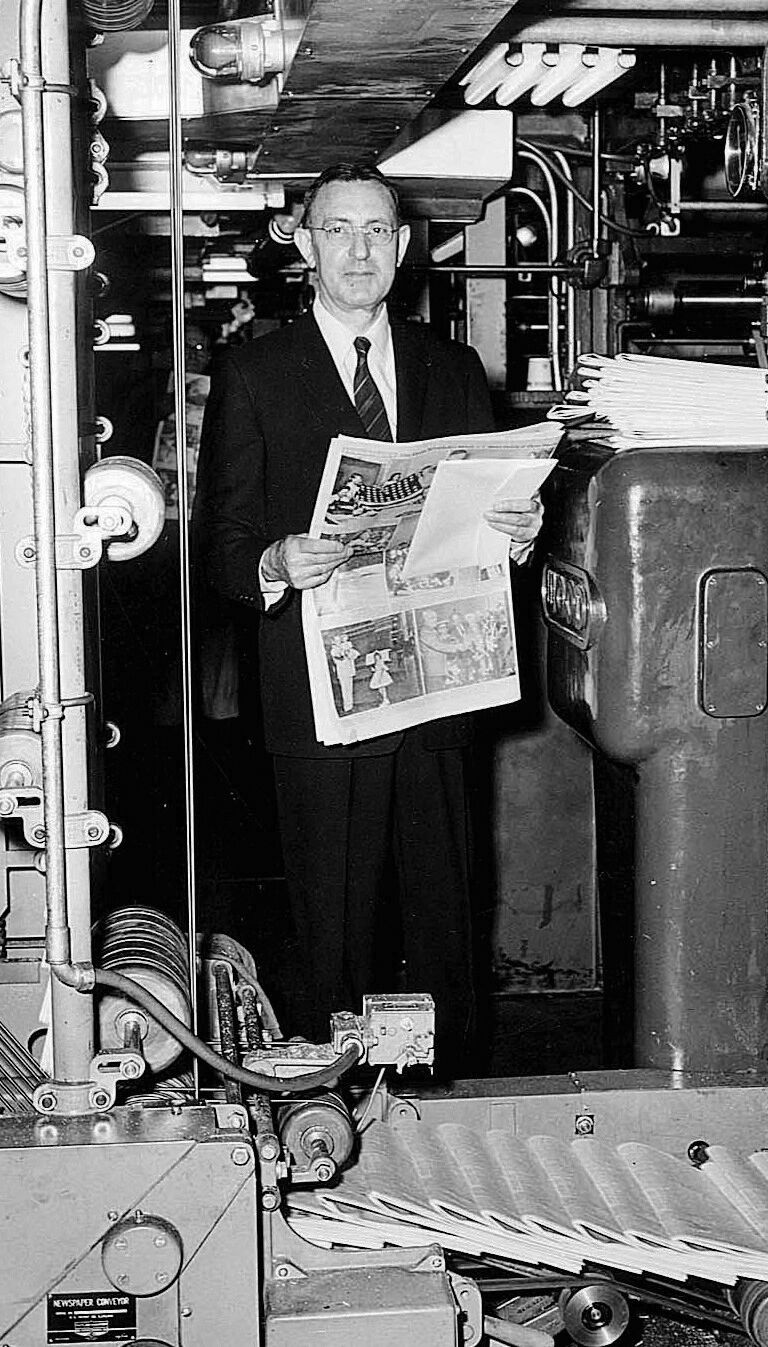 Alfred H. Kirchhofer checks the first  papers run off the presses at the new News printing plant on Scott Street in 1958. 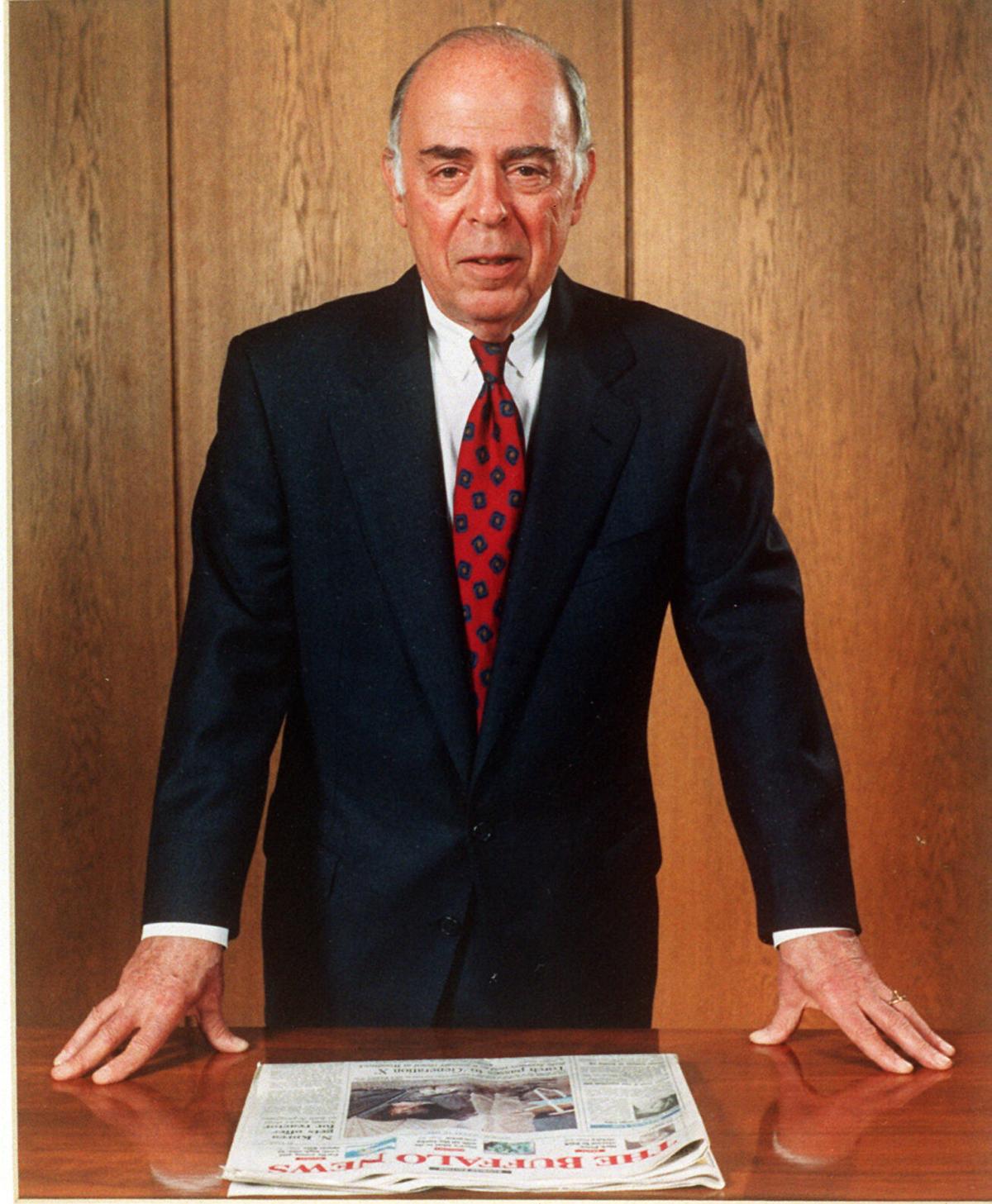 Murray B. Light retired as editor in 1999. He played a key role in helping The News win its battle with the rival Courier- Express, including the launch of a Sunday edition.

The Buffalo News’ reputation for journalistic excellence has been shaped by some of the nation’s most talented news leaders.

Our current editor, Mike Connelly, arrived at The News in 2012 having led the Sarasota Herald-Tribune to a Pulitzer Prize in 2011 for its investigative reporting on Florida’s property insurance industry. Under Connelly, The News was a Pulitzer finalist for breaking news coverage of the 2014 “Wall of Snow” storm. He has focused the newsroom on enterprising reporting that can’t be found anywhere else – in line with our mantra of “Nowhere But The News.”

His predecessor, Margaret Sullivan, was The News’ first woman editor. In her 13 years in the top job, she created the paper’s first investigative reporting team and built BuffaloNews.com into the region’s foremost online news source. Sullivan left the News to become the public editor at the New York Times; she’s currently a media columnist with the Washington Post.

Murray B. Light led the paper for the last 30 years of the 20th century, the last 20 as editor. Light played a key role in helping The News win its battle with the rival Courier-Express, including the launch of a Sunday edition. He oversaw the creation of Gusto, our entertainment section, and guided the company into the era of modern technology.

Paul E. Neville was editor at The Buffalo News for just three years, from 1966 to 1969, but is remembered for his extroverted personality and his conversations with Buffalo Bills founder Ralph C. Wilson Jr. that helped land the team in Buffalo. It’s said that during his time as editor, Neville would answer fire alarms from his home in Amherst and call the office with information right from the scene.

Edward H. Butler Jr. held the title of editor and publisher from 1914 until his death in 1956, but it was Alfred H. Kirchhofer who was responsible for news decisions during most of that time. From 1927 to 1966, first as managing editor and then editor, Kirchhofer led the news operation. Hired by The News in 1915, Kirchhofer was just 23 when he became the News’ first Washington reporter. When he was called back to Buffalo to become managing editor, it was his goal to make the News a prestige “Newspaper of record.” Light, in his book chronicling the history of The News, wrote that Kirchhofer was “without doubt the most dominant figure in Buffalo area media in the 20th century.”

“As an editor, his demand levels were so great they produced fine journalism,” Light wrote.

When The News launched its daily edition in 1880, William McIntosh was named managing editor. Because the Butlers kept the title as editor, the managing editor led the newsroom at the time. McIntosh’s influence during his 30 years in that position live on today: He started “Everybody’s Column,” the letters to the editor section that remains one of our most popular features. The high bar set early on by McIntosh was raised by the modern-day leaders who followed. Their exacting standards and commitment to innovating with the times have kept The News in a leadership position in Buffalo and beyond.

Alfred H. Kirchhofer checks the first  papers run off the presses at the new News printing plant on Scott Street in 1958.

Murray B. Light retired as editor in 1999. He played a key role in helping The News win its battle with the rival Courier- Express, including the launch of a Sunday edition.