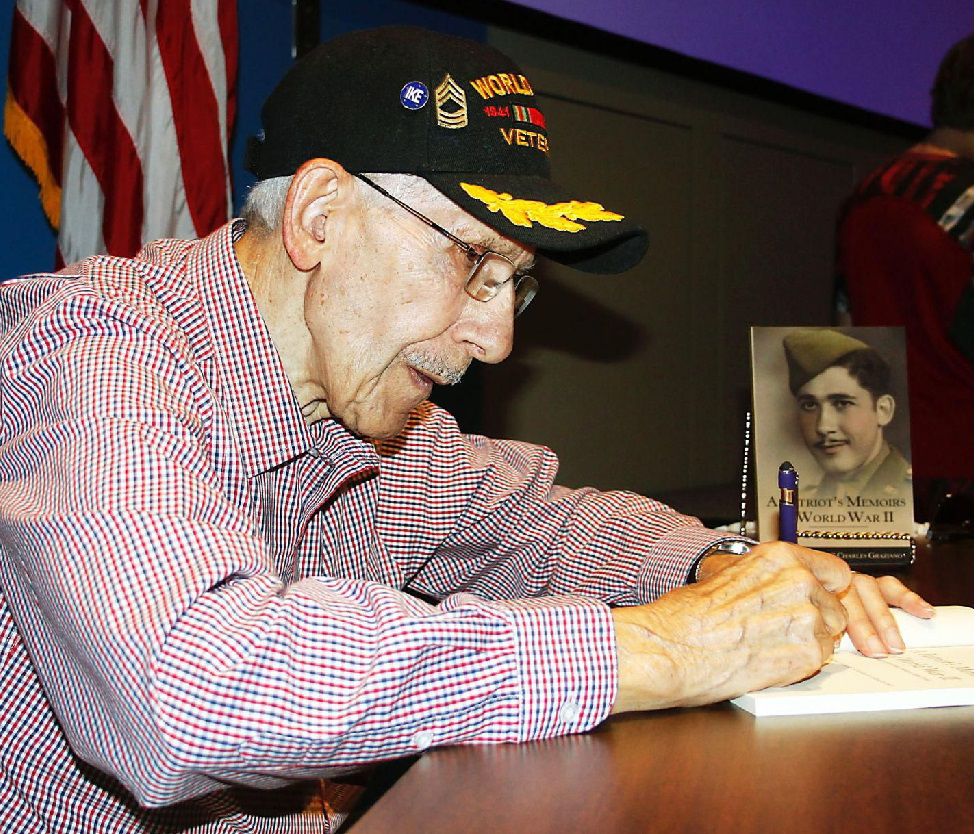 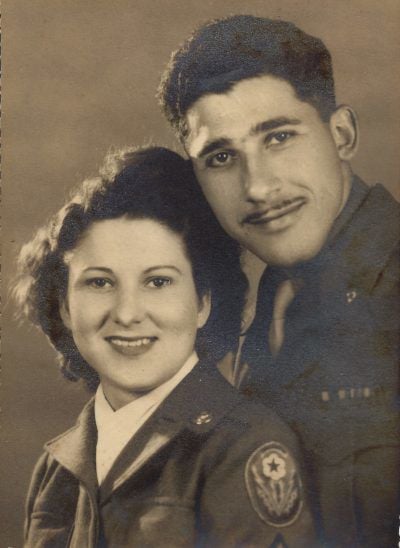 East Aurora native Luciano “Louis” C. Graziano married his wife, Eula “Bobbie” Shaneyfelt, during World War II at a courthouse in Reims, France, on Oct. 2, 1945. He was an Army master sergeant and she was a Women's Army Corps staff sergeant. (Courtesy of Luciano Graziano) 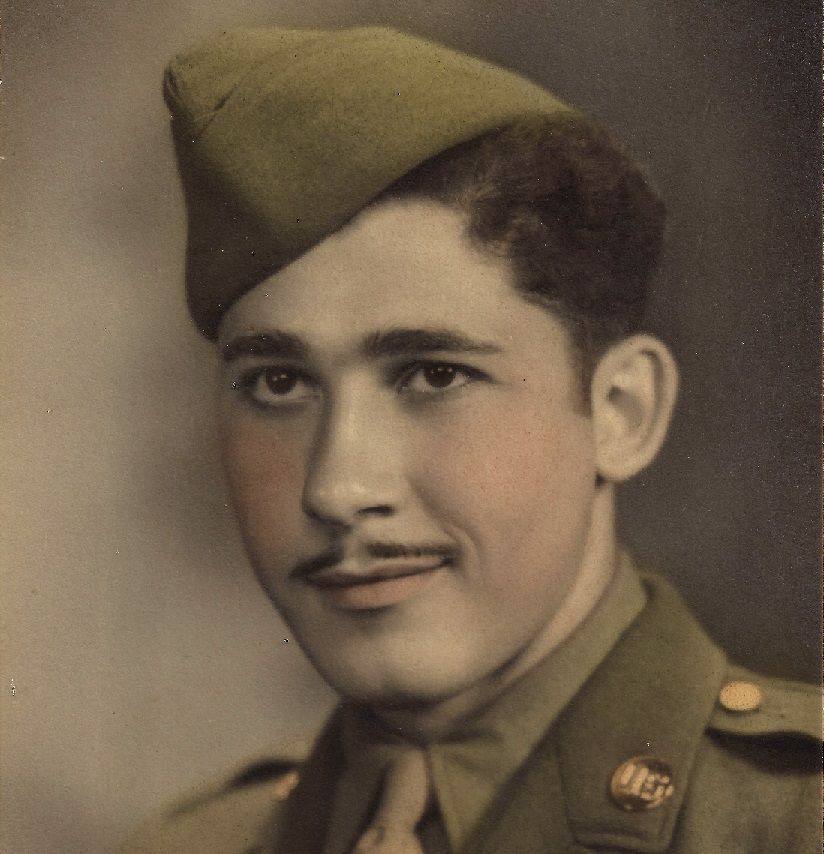 East Aurora native and World War II veteran Luciano “Louis” C. Graziano is believed to be the last living eyewitness to the formal surrender of Germany at the “Little Red Schoolhouse” in Reims, France.

Of that monumental moment in history on May 7, 1945, Graziano says that at the time he did not realize the gravity of it.

But as the years flew by, he came to understand the significance.

“I was honored to be in that room,” Graziano wrote in his recently published book, “A Patriot’s Memoirs of World War II - Through My Eyes, Heart and Soul.”

As the last eyewitness, Graziano is now in demand for his insights. In June, he spoke at the Dwight D. Eisenhower Presidential Library during events commemorating the 75th anniversary of the June 6, 1944, D-Day Invasion of Normandy.

“To the best of our knowledge, we believe he is the last surviving witness,” said Lisa Kijowski, a spokesperson for the Eisenhower Foundation. “Everyone enjoyed him and what he had to say.”

So how did the young master sergeant end up in the war room of the schoolhouse packed with dignitaries from the victorious Allied Forces and defeated Germans there to sign the “Instrument of Surrender”?

The short answer is: Graziano knew how to work with his hands.

After leaving grammar school, he worked in masonry with his Italian immigrant father, Pietro. But when Graziano’s sister Phyllis opened a beauty parlor in East Aurora, he put aside his bricks and mason's trowel for scissors and other tools of beauty.

“I did everything, haircuts, hair dyeing, permanent waves,” he said.

Graziano enjoyed the work so much that he would make a lifelong career of it. But when a draft notice arrived in January 1943, he left the beauty parlor for the ugly business of war.

The Army recognized his work ethic and natural abilities and in England assigned him to head a unit of 35 soldiers, who specialized in everything from carpentry to stringing telephone cable.  When they arrived in Reims, Graziano was charged with keeping all of the buildings occupied by Americans in working order.

Among those structures was the Little Red Schoolhouse, and that’s how he got into the war room to watch the German commanders surrender.

But for that history-making moment to happen, the fight needed to be taken straight to the German homeland. And that's what happened when then-Gen. Eisenhower, the supreme commander of Allied Forces in Europe, ordered the D-Day Invasion. Graziano and thousands of other troops crossed the English Channel in what was the biggest amphibious invasion in history.

“I was in the third wave at Omaha Beach. I drove a gasoline truck off the LST [landing ship tank] onto the shore. Then I jumped out of it and got my machine gun and other equipment. I laid down with dead soldiers on the beach and I creeped up toward the cliff. The Germans were shooting down at us.

“When I got to the cliff, I got my flame thrower. I shot up underneath the bunker. It lit up the grass and brush and with all that on fire, the Germans had to get out of it. Then I shot my flare gun up in the sky. I figured the Navy would see it.

“They shot from their ships and knocked out the bunker. They knew what I wanted. They were shooting over our heads and giving us protection. I lost two of my men that day,” Graziano said.

Months later in the Battle of the Bulge, Germany's last major offensive during one of Europe's worst winters on record, Graziano and his captain climbed into an unheated Jeep and set out on a nocturnal mission. Their job was to locate a company of Gen. George S. Patton's troops who were needed in Bastogne, but had somehow gotten lost.

“It was snowing terrible. It was near zero or below. We found them the next morning. There was a whole company of them, 500 or 600 in trucks. Bastogne was quite a ways. It took us a couple days.”

By the end of the mission, Graziano said his feet were frostbitten.

“They put me in the infirmary. They said I got there just in time, that they would have had to cut my feet off. I was in the infirmary about three weeks. Then they said if I wanted to get back out with my company I had to wear a pair of shoes a size bigger. My size was 12 and I had to have a size 14 and wear two pairs of socks. I told my mess sergeant, ‘You better find me those shoes.’ ”

The cold winter of 1944-45 faded in the spring when Graziano's heart melted after he spotted the woman he would marry.

“My buddy said, ‘Let’s go to the ball game to watch the ladies playing ball.’ I saw this lady pitching and I said, ‘Who is that?’ My buddy’s girlfriend said, ‘She’s my best friend. Her name is Bobbie.’ I went the next day to the office where she worked and talked to her. I made a date with her.”

Women's Army Corps Staff Sgt. Eula “Bobbie” Shaneyfelt, who hailed from Hartselle, Ala., stood Graziano up. He persisted and romance bloomed. They were married in the Reims courthouse on Oct. 2, 1945, and honeymooned in Paris for a week.

“We got married by a priest when we got discharged and arrived back in New York,” Graziano wrote in his book. Their 62-year marriage ended when she died on Feb. 6, 2007, which was Graziano’s 84th birthday.

After the war, they had settled in Thomson, Ga., where Graziano opened Louis Hair Styling Salon to support their family of five children. His daughter Moira Johnson now runs the business but he still cuts the hair of some of his longtime customers.

Johnson and other family members helped him put together his book, which is based on handwritten notes he jotted down over the decades whenever he remembered something about the war.

One of Graziano's most exciting moments since LifeRich Publishing published his memoir earlier this year was when he met Mary Jean Eisenhower during the D-Day ceremonies at her grandfather’s presidential library in Abilene, Kansas.

“I presented her with my book,” he said.

“She was very excited to meet him,” said Kijowski, of the Eisenhower Foundation.

It was not Graziano's first meeting with an Eisenhower.

When he served as the utilities foreman with the 102nd Infantry Field Artillery Battalion, Special Headquarters Command in Reims, he met Gen. Eisenhower.

“We put a special phone line in for Eisenhower at his quarters outside Reims. We ran lines through fields. We had to be careful because of land mines,” Graziano said of the top-secret job he and another soldier, Buck Barnette, performed.

When the job was completed, Graziano and Barnette spent the night at Eisenhower’s residence.

“General Eisenhower was good to us while we were there. He was a man I respected and looked up to. It was an honor to serve under him,” Graziano said in quoting from his book.

And now this last living witness to the German surrender is planning to come back home to East Aurora in September to visit relatives and, he hopes, sell copies of his memoir at book signing events he's trying to arrange.

Johnson describes her father as “a living piece of history,” who is part of the rightly named “Greatest Generation.”

“That generation just went and did what they had to do,” she said. “Look what they did for the country. We’re free today.”

As most of you know, Buffalo has never hit 100 degrees since our records began in 1871, having touched 99 just once. A town called Verkhoyansk in Siberia now has us beat, having reached 100.4 degrees on June 22. This town is north of the Arctic Circle, and is the first location anywhere north of the circle to reach

The “Mad Men” style cocktail lounge of the Clinton Aire Hotel was transformed into the marquee spot of the Disco Era in Buffalo. Club 747 opened to much fanfare at the Executive Inn on Genesee Street across from the airport in March 1975. The joint, it was said by one DJ,  “established Buffalo as a disco city.” The club

East Aurora native Luciano “Louis” C. Graziano married his wife, Eula “Bobbie” Shaneyfelt, during World War II at a courthouse in Reims, France, on Oct. 2, 1945. He was an Army master sergeant and she was a Women's Army Corps staff sergeant. (Courtesy of Luciano Graziano)