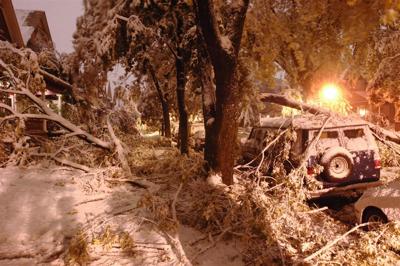 The destructive October storm in 2006 was a surprise to all – even our local meteorologists.

Thick, wet snow starting falling the night of Oct. 12 and continued into Oct. 13, leaving many Western New Yorkers without power and trapped by downed trees for days. The storm still holds the region's record for the highest amount of snow to fall in 24 hours, according to National Weather Service's Buffalo office.

The storm's severity didn't deter Buffalo News photographers from heading out into the snow to document its destruction. Ten years later, in 2016, those photographers returned to document those same locations. The striking difference in many photos is the absence of large trees that were felled after the heavy snow took out many of their branches.

Take an interactive look back at the storm through the lens of Buffalo News photographers in 2006, and again in 2016.

Click and drag the white line in the middle of each photo to the left or right see the before and after scenes.

Ashland and Highland avenues in Buffalo

Lynnbrook Drive in the Town of Tonawanda

Koenig Avenue in the Town of Tonawanda

The October Surprise: A look back

The freak early October storm that became known as the October Surprise struck the night of Oct. 12, 2006, and affected Western New Yorkers for days after. Leaves were still on the trees, and the heavy snow brought down hundreds of thousands of trees, blocking roads and leaving hundreds of thousands of homes and businesses without heat and electricity for days. Thirteen people died. Efforts are still underway to “re-tree” the area, a legacy of the storm also dubbed

Then and Now: the October Surprise

On the night of Oct. 12, 2006, a surprise snowstorm dropped onto Erie County, toppling trees and power lines, leaving thousands of homes and businesses without power and closing schools, in many districts, for more than a week. Compare photos from the first four days of the storms with photos taken at the same spots 10 years