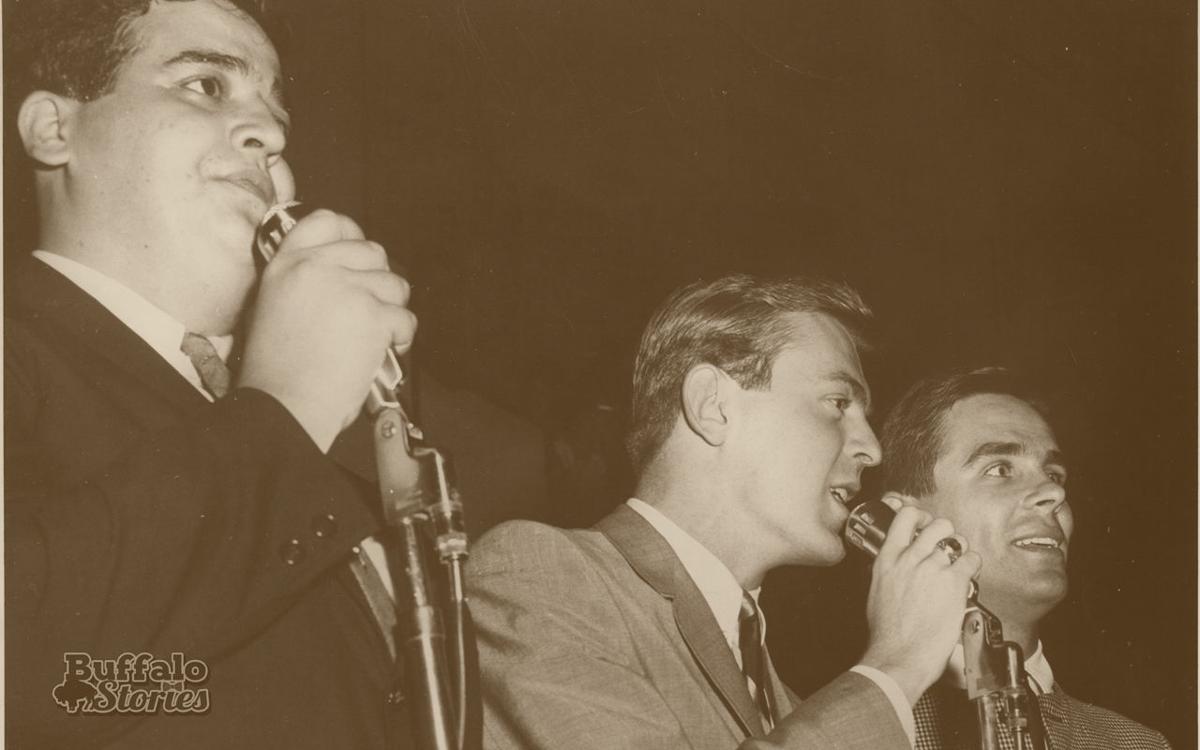 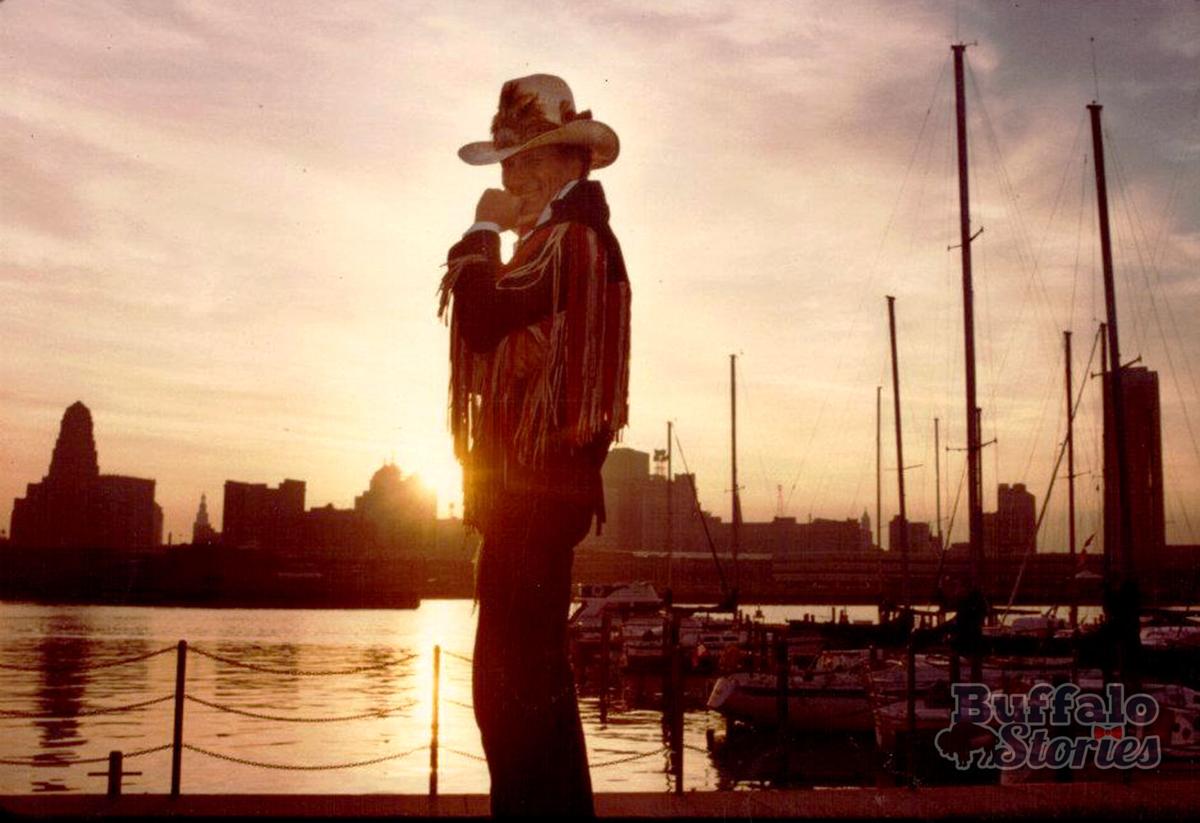 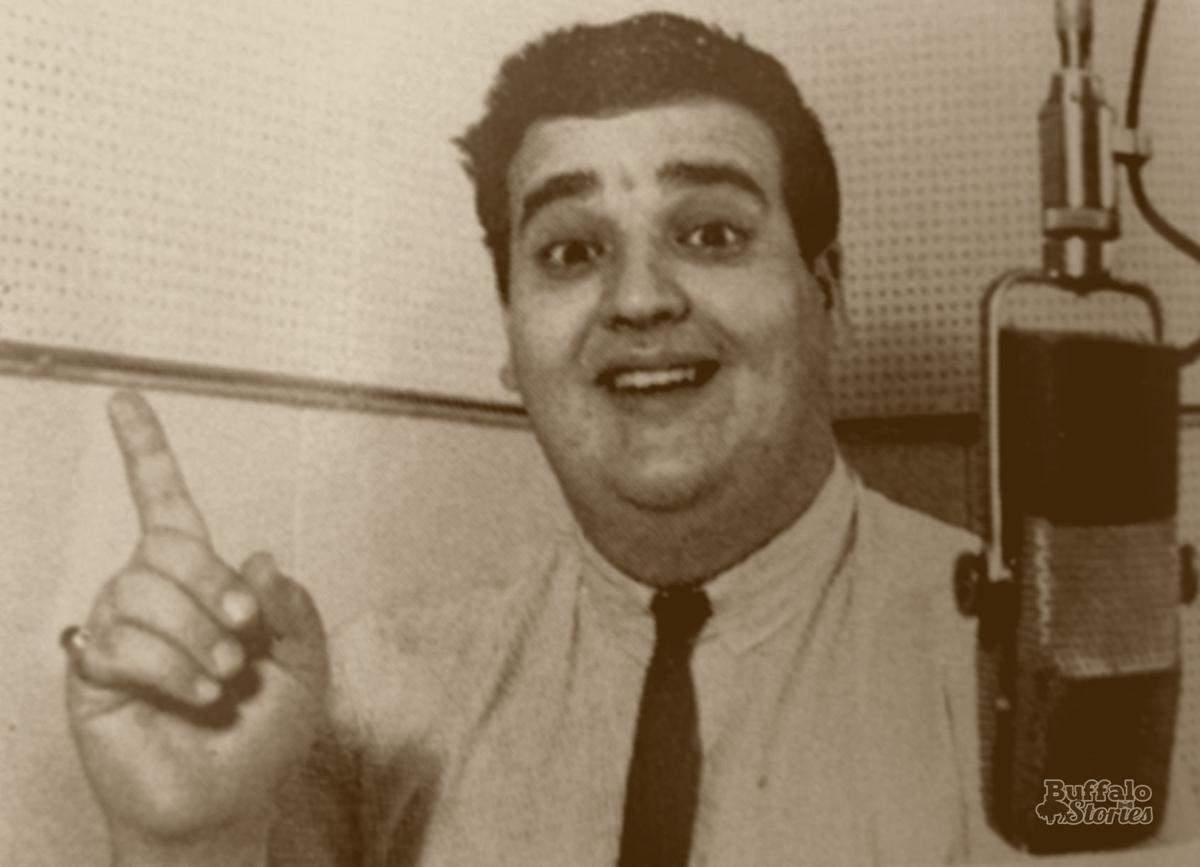 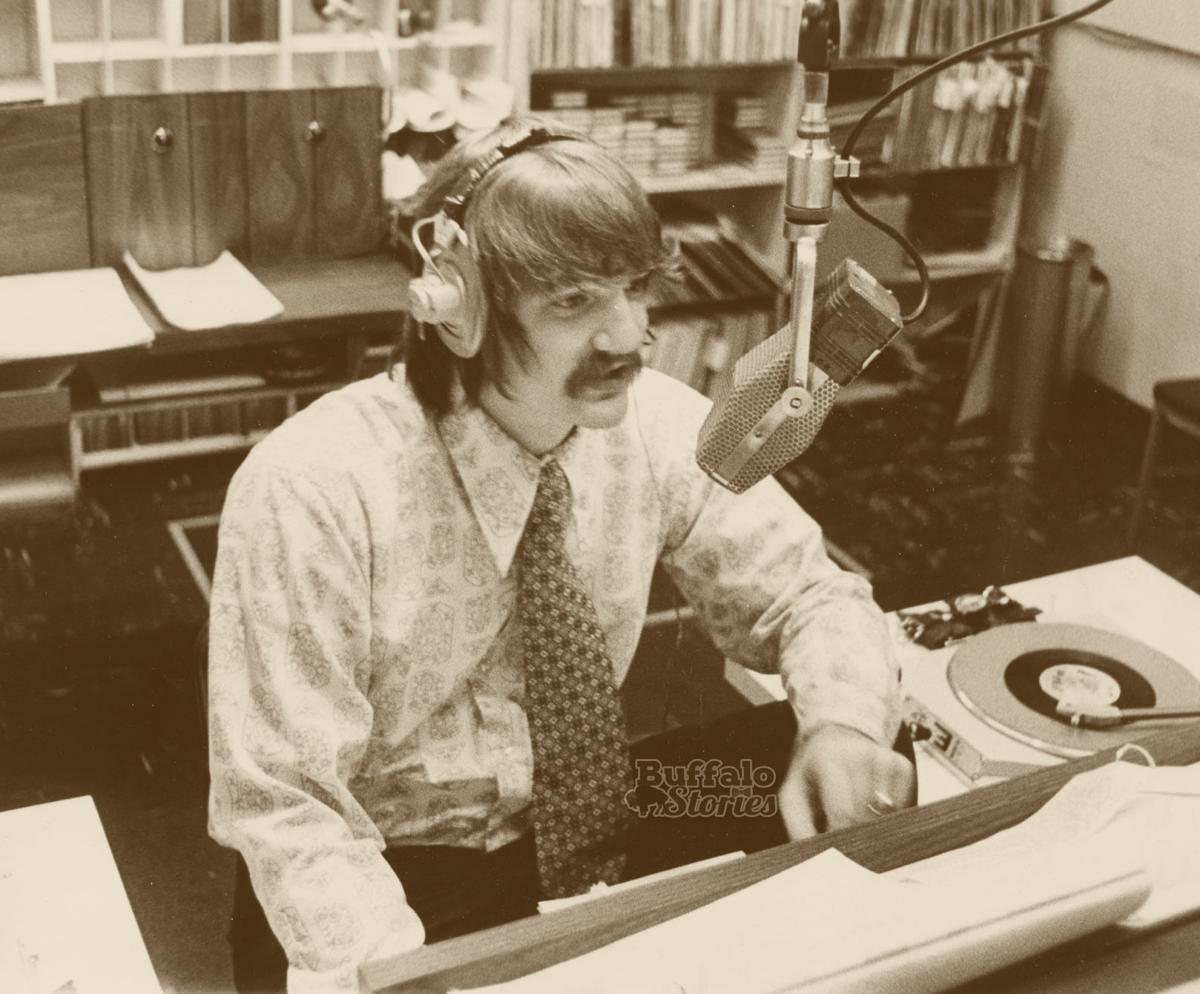 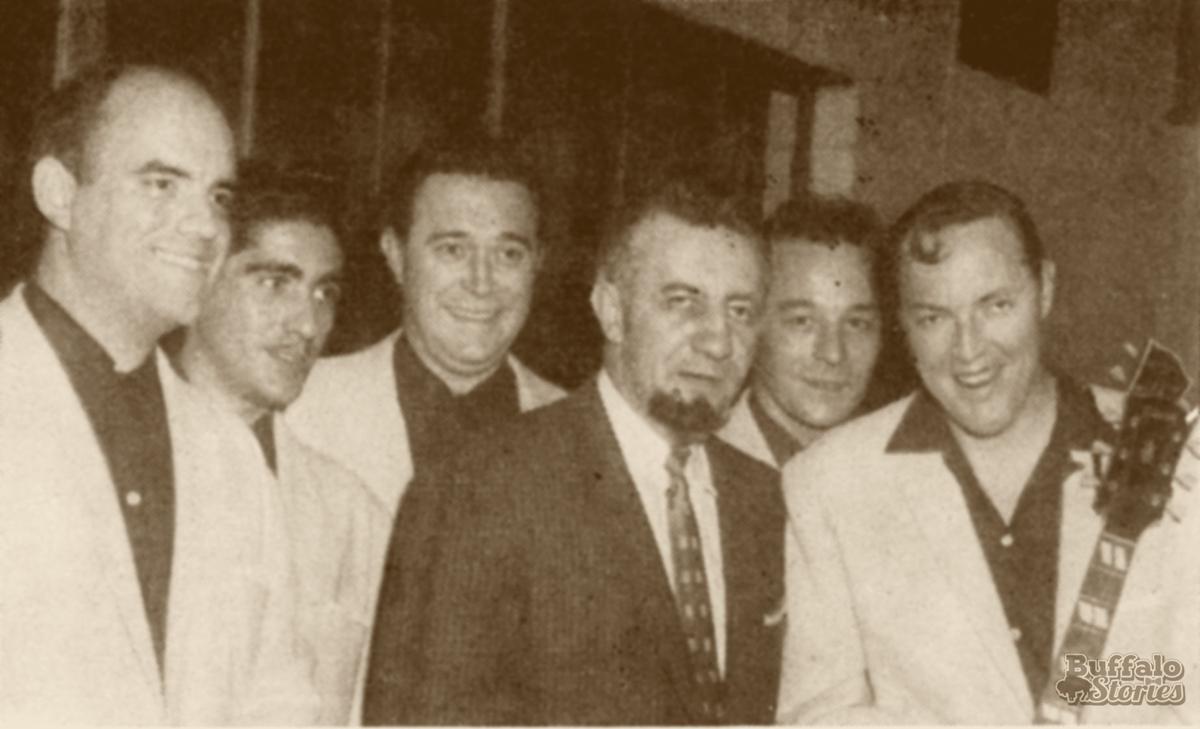 George "Hound Dog" Lorenz with Bill Haley and the Comets 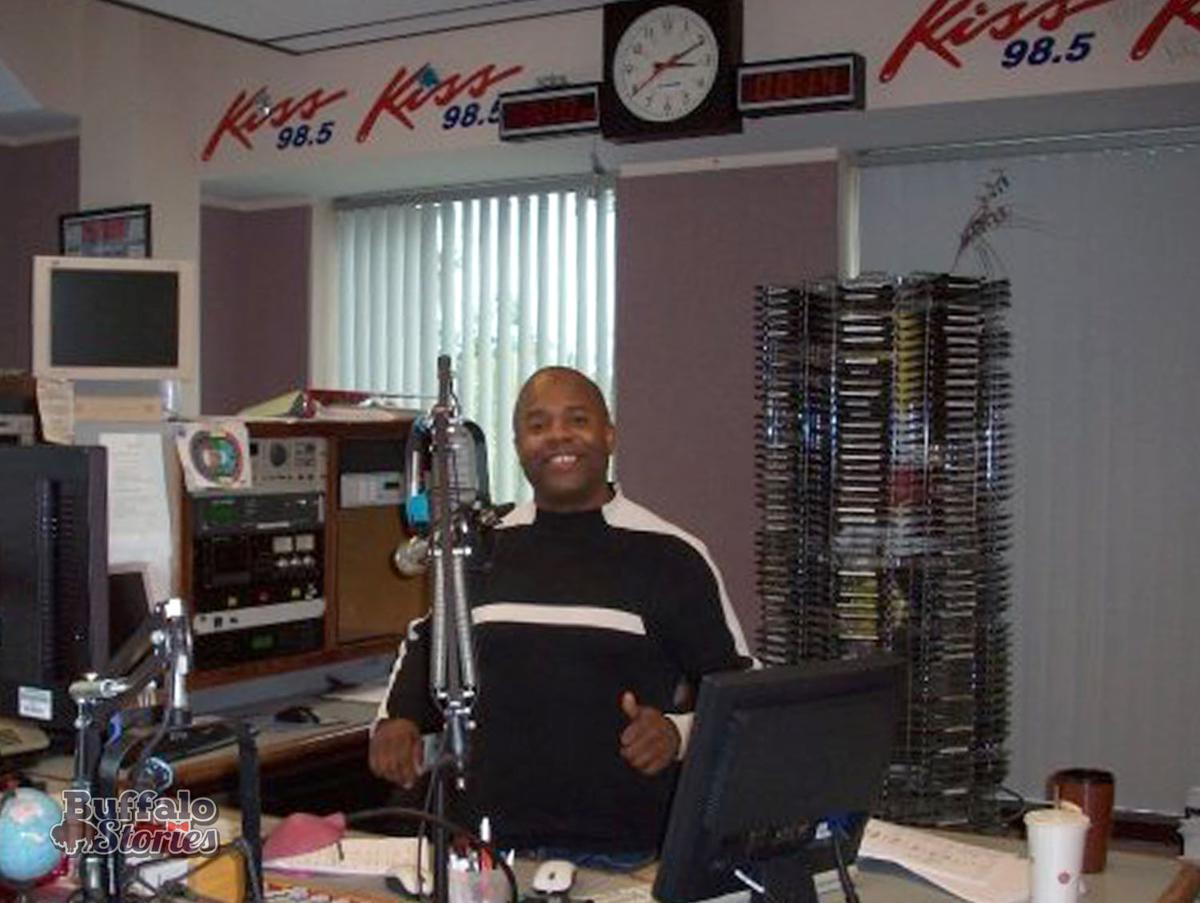 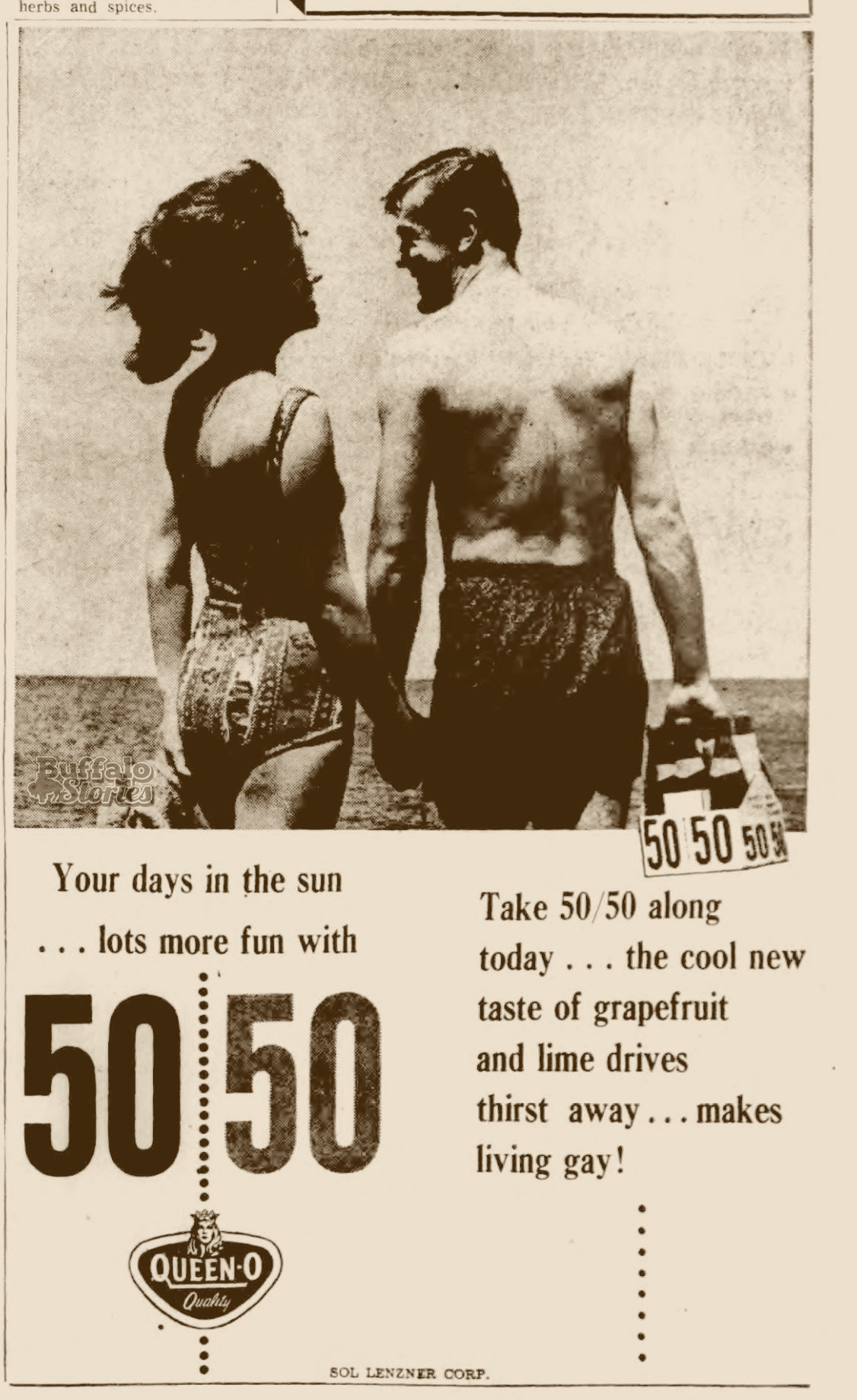 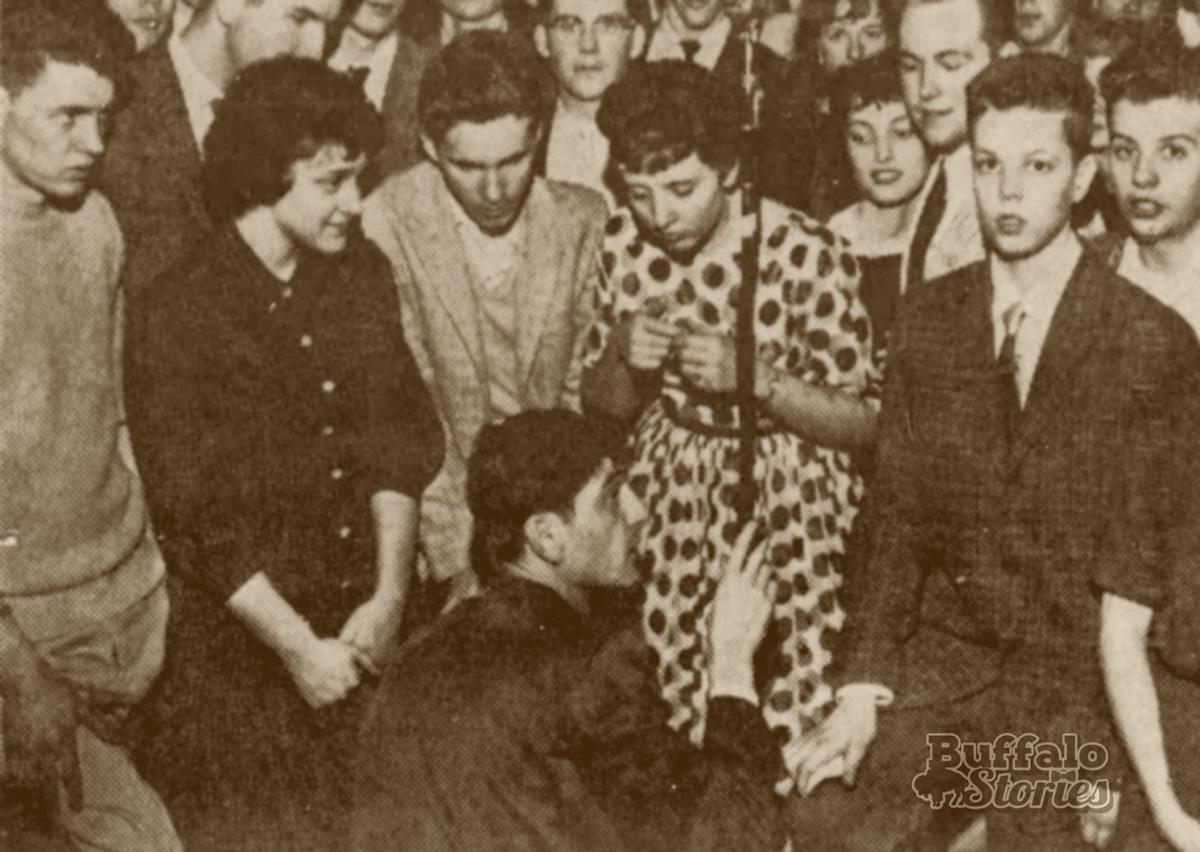 As rock ’n’ roll music began forming from melding of a handful of American folk music traditions in the years following World War II, so to the idea of the American teenager also came bubbling out of the abyss.

Teenagers and their music have been reflective of one another for more than 70 years and that union of kids and trendy songs has been personified in the local disc jockeys who provide the angst- and love-filled soundtrack for a young person’s middle school and high school years.

The nighttime DJs – the ones who squeaked from a transistor, thumped from a boom box, or streamed from an app while you pretended to do your homework – are often the ones whose brazen antics and public appearances remain as much a part of your growing up as your crazy uncle and family gatherings.

Buffalo’s first mystical nighttime record spinner grew out of the same natural evolution that brought about rock ’n’ roll and teenagers in the first place.

The Hound Dog. He was famously on the stage with Elvis at the Aud in 1957, but George Lorenz had already helped create the atmosphere that allowed Elvis to emerge in American culture.

He started playing music on the radio in the ’40s, and it was the music that was his focus. Although he was a successful radio personality and later the founder and owner of Buffalo’s WBLK Radio, he wasn’t too much into the programmed trappings of what it previously meant to be an announcer.

The Hound refused to give time and temperature updates through the course of his show, often announcing at the beginning of the show that listeners should set their watches because they wouldn’t hear the time again until his show was over.

A rebellious jive talker playing rebellious, fast, loud music was an act that young people ate up, but by the time The Hound’s “rhythm and blues” of the early ’50s became Top 40 “rock ’n’ roll” of the late ’50s, George Lorenz and the pop culture complex he played a large part in creating had evolved in different directions.

That was true to the point that when The Hound’s radio home, WKBW Radio, decided to change formats to play nothing but Top 40 rock music in 1958, the station parted ways with the star who helped create the genre.

Replacing Lorenz on the KB night shift was Dick Biondi – whose on-air antics were called “screaming” then, but would barely make anyone notice today.

Biondi’s tenure in Buffalo ended in an early example of the power of a KB DJ. Angry after being yelled at by a station manager, Biondi casually mentioned on the air that if anyone sees his boss driving by in a gray Impala convertible, that they should throw rocks at him.

When one of those rocks when through the station manager’s windshield, Biondi was shown the door.

Soon thereafter, Buffalo legend Tommy Shannon grabbed the KB nighttime mic. He had no need for screaming or rebellion to gain an audience.

Smooth, debonair and literally the boy next door, the handsome and ultra-cool Shannon was a graduate of South Buffalo’s Holy Family grammar school and Bishop Ryan High.

As if owning nights on KB and driving a Corvette convertible wasn’t enough, there was the night Swedish sex-symbol Ann-Margret was in Buffalo on a promotional tour, and hopped in Tommy’s sports car for a date at the trendy Candy Cane Lounge, downtown next door to the Market Arcade.

That was the same nightclub where Shannon met the group that would ultimately become known as “The Rockin’ Rebels,” who would take “Wild Weekend,” their instrumental version of the Tommy Shannon Show theme song, to the national record charts.

If there was a way to “one up” having your theme song land on the national charts, Joey Reynolds might have found it. KB’s night man through the mid-’60s got The Four Seasons to sing their No. 1 hit “Big Girls Don’t Cry” with the lyrics changed to “The Joey Reynolds Show.”

Another local guy, Reynolds grew up in Buffalo’s Seneca-Babcock area playing radio announcer at the neighborhood Boys Club, and was every bit of a shock jock 20 years before the term was created for Don Imus and Howard Stern.

He started a boisterous on-air feud with The Beatles and refused to play their records or even say their name, calling them “the four norks from England.” This was until he helped promote the local band The Buffalo Beatles.

Reynolds’ bombastic and over-the-top style earned him a following complete with membership cards for the “Loyal Order of the Night People.” That audience extended far beyond Buffalo and Western New York. Despite working at a station 300 miles away in Buffalo, he was one of the most popular radio personalities in Baltimore, with thousands of listeners of KB’s strong signal mixed with Reynolds’ big mouth.

Reynolds’ exit from WKBW is one of the most fabled in the legends of radio.

As the Variety Club Telethon aired on Channel 7, Reynolds felt slighted for being slotted to host the overnight portion of the big event. In his memoir “Let a Smile Be Your Umbrella ... But Don't Get a Mouthful of Rain,” Reynolds admits to having had a few drinks before going on radio and giving TV star Frank Gorshin a hard time in an interview about the fundraiser. Reynolds then insinuated another TV star and telethon guest host – Forrest Tucker of "F Troop" – was a drunk and had a case of booze in his dressing room.

A station manager took the episode personally – especially after Reynolds goaded him and made a joke about his bald head.

Rather than waiting to be fired, Reynolds, in an all-time display of brassiness, nailed his shoes to the station manager's door with a note saying “FILL THESE” attached.

A few years later, just after Jack Armstrong came to KB in 1970, he was on a panel discussing what makes for a successful Top 40 DJ.

“Entertainment is the lifeblood of the radio station,” he said. “Music is most important; the DJ is second.”

He was being humble. Radio’s original motormouth was a master of his craft, and was clocked by Guinness was the world’s fastest talker, even as he was having conversations with his grunting alter ego Gorilla.

Armstrong was able to get away with saying strange and off-color things because he said it so fast there was no chance to remember anything more than the feeling he left you with as he rapped faster than anyone else alive.

When Armstrong left KB in 1973, Buffalo got its first taste of another broke-the-mold style radio entertainer.

Shane Brother Shane, the Cosmic Cowboy, spun records and waxed philosophical on WKBW, WYSL, and eventually was best known for his time on WGR.

“Buffalo’s zany philosopher king lounges behind (the microphone),” wrote News reporter Margaret Sullivan in 1980, “that deep wacky voice doing its thing between songs, sounding as if it will break into a torrent of maniacal laughter at any moment.”

DJ and record spinner wasn’t enough for Shane, who took his free-spirited personality out from behind the microphone into the real world, racing his Chevelle, the WYSL Missile, riding a motorcycle off an 85-foot cliff and leaping through a wall of flame.

In the modern era of radio, large corporate owners have all but eliminated the evening DJ. There isn’t much live or even local on tape in the evenings on Buffalo radio anymore.

Until earlier this year, DJ Anthony had been bucking that trend on Kiss 98.5 FM. A Lake Shore High School grad who started playing music in nightclubs, DJ Anthony started working at Kiss in 1994 and went to the night shift in 2000.

His laughter and good spiritedness is infectious, and whether it’s in a club, on the radio, or at a charity event, Buffalo hasn’t been able to help but love DJ Anthony.

From the time his High School Spirit contest caused a coin shortage in Western New York-- collecting 15 million pennies for Hospice, to years of being the face of Goin’ Bald for Bucks, DJ Anthony has helped young people set Buffalo’s music tastes with the Top 10 at 10 vote, but also showed an entire generation of Western New York teens the power of putting their efforts together to help people.

The era of the teen-centric nighttime DJ came to an end in Buffalo when DJ Anthony was let go in a budgetary move earlier this year.

Shannon’s legacy, including his theme song that became a top-10 hit, was recently celebrated in a Buffalo News story by local media historian Steve Cichon, who described him as “smooth, debonair and literally the boy next door.”

George "Hound Dog" Lorenz with Bill Haley and the Comets