One hundred years ago this week, Buffalonians were reading about the latest innovation in election returns — the wireless receiver, better known these days as radio.

History books point to the broadcasts of experimental station 8XK in Pittsburgh — which would eventually become KDKA, but Pittsburgh was not alone on the radio dial a century ago. That same historic night, at the same exact time, election results broadcast by The Buffalo Evening News also came in loud and clear on wireless sets across Western New York.

Radio listeners in Buffalo and Pittsburgh had the same mind-blowing, history-making experience on what was a rainy evening in Western New York. People sat around their wireless sets in their living rooms, finding out in real time that Warren G. Harding had been elected president.

The newly born power of radio was equally evident in both cities, and the marvel and wonder surrounding this growing technology was exactly the same. In fact, it was all part of the same plan.

The American Radio Relay League, an amateur radio operator group still in business to this day, created a plan to “beat the regular wire service in getting the election returns to the public.”

“The plan is to have a good amateur transmitting station in each important city throughout the country send broadcast via radio the available data in his territory once every hour. This information will be picked up by thousands of radio amateurs who will arrange, through the local newspapers or in some other manner, to bulletin the returns for the general public in their respective territories.”

All this is described in a Pittsburgh Daily Post article, which goes on to say that Frank Conrad’s 8XK will take part in the effort for Pittsburgh area listeners.

A Buffalo Evening News article announcing the broadcast of election returns for Western New York doesn’t mention the larger plan, but does offer more detail about the Buffalo plan.

The Buffalo Evening News had set up a special direct telephone line to the home of amateur radio operator Klinck, who was teacher of electrical science at Technical High School and was able to fund his expensive radio hobby as a member of one of Buffalo’s top meatpacking families.

After months of experimentation, he invented and pioneered the use of equipment that would allow for the clear transmission of phonograph records over his wireless transmitter.

“Well boys, how did you like that?” said Klinck, quoted in the Buffalo Courier after playing Strauss’ "The Blue Danube." “Now listen, and I’ll give you a little jazz.”

That was the sound, on a March night in 1920, in the attic at 38 West Parade Ave., as America’s first disc jockey took to the airwaves. You pass over the historic spot where it happened when you drive the outbound Kensington as you pass the Buffalo Science Museum.

Klinck received word from as far away as Long Island that people were listening to his broadcasts. By mid-September, he reported that he was getting music requests from folks all over the northeast.

He also reported that from the beginning, the folks at the big wireless station in Pittsburgh were among his “most interested listeners.” Months before that “first broadcast,” the Westinghouse engineers at KDKA were tuned into Buffalo. On that election night 1920, Klinck was on the air from 6 p.m. to midnight, offering election results interspersed with recorded music. Not only was he Buffalo’s deejay, but also Buffalo’s first radio newsman.

That first commercially sponsored broadcast in Buffalo was described the next day in The News:

"As soon as the returns came into the Evening News office, they were telephoned over a special wire to Mr. Klinck’s residence, where they were received by a member of the Evening News staff. From 6 o’clock until midnight, Mr. Klinck sat at his wireless telephone apparatus and sent out the encouraging Republican news. Not only were city and county returns flashed out over the wireless outfit, but also state and national figures.

"During the evening, Mr. Klinck … received word from several wireless operators in the city, in Lancaster and surrounding towns that they were getting the returns by wireless with perfect satisfaction. … During lulls between dispatches, the operators who were listening for the returns were entertained by musical selections from a Victrola in the Klinck home."

Listeners in Lancaster were amazed as the radio returns beat out the Western Union telegraph service by minutes. Pine Street druggist Harry Frost told The News that he enjoyed the “returns by wireless telephone” immensely. “We sat around very comfortably smoking cigars and commenting on the election, while every few minutes, Mr. Klinck’s voice would roar out the results as he received them.”

Both the technical aspects and the reaction to Buffalo’s election night 1920 broadcast have been better chronicled than the “more historic” program the same night from Pittsburgh. The main difference remains that the KDKA broadcast was made by the Westinghouse Corporation in an effort to promote and sell the radio tubes they were manufacturing, while Klinck was an amateur operator without much interest in self-promotion.

As the world celebrates the 100th anniversary of radio on Monday with plenty of mentions of Pittsburgh and KDKA, Buffalonians should also celebrate, understanding our city’s exact same role in the birth of modern mass media a century ago.

[BN] Chronicles: The women and men of Buffalo vote for president, 1920

Journalism is often thought of as the first draft of history – but on Election Day 100 years ago, The News slightly missed the mark.

More than four decades removed from the time he left office, there aren’t many Buffalonians who can claim to be a better representation of what it means to be a Buffalonian than Stan Makowski.

The Sample – the store that defined Hertel for generations

There was more titillation than there was skin, in the brief parts of the show where there was any at all.

Football during a global pandemic, 1918

Millions of Fords and Chevys were built here by thousands of our blue-collar fathers and grandfathers.

When Crystal Beach opened for its 58th season on May 20, 1948, it was the general public’s first chance to try “the world’s newest, largest, a…

It wasn't that long ago that the view straight up Genesee Street toward City Hall to the open skies over Lake Erie was still intact. 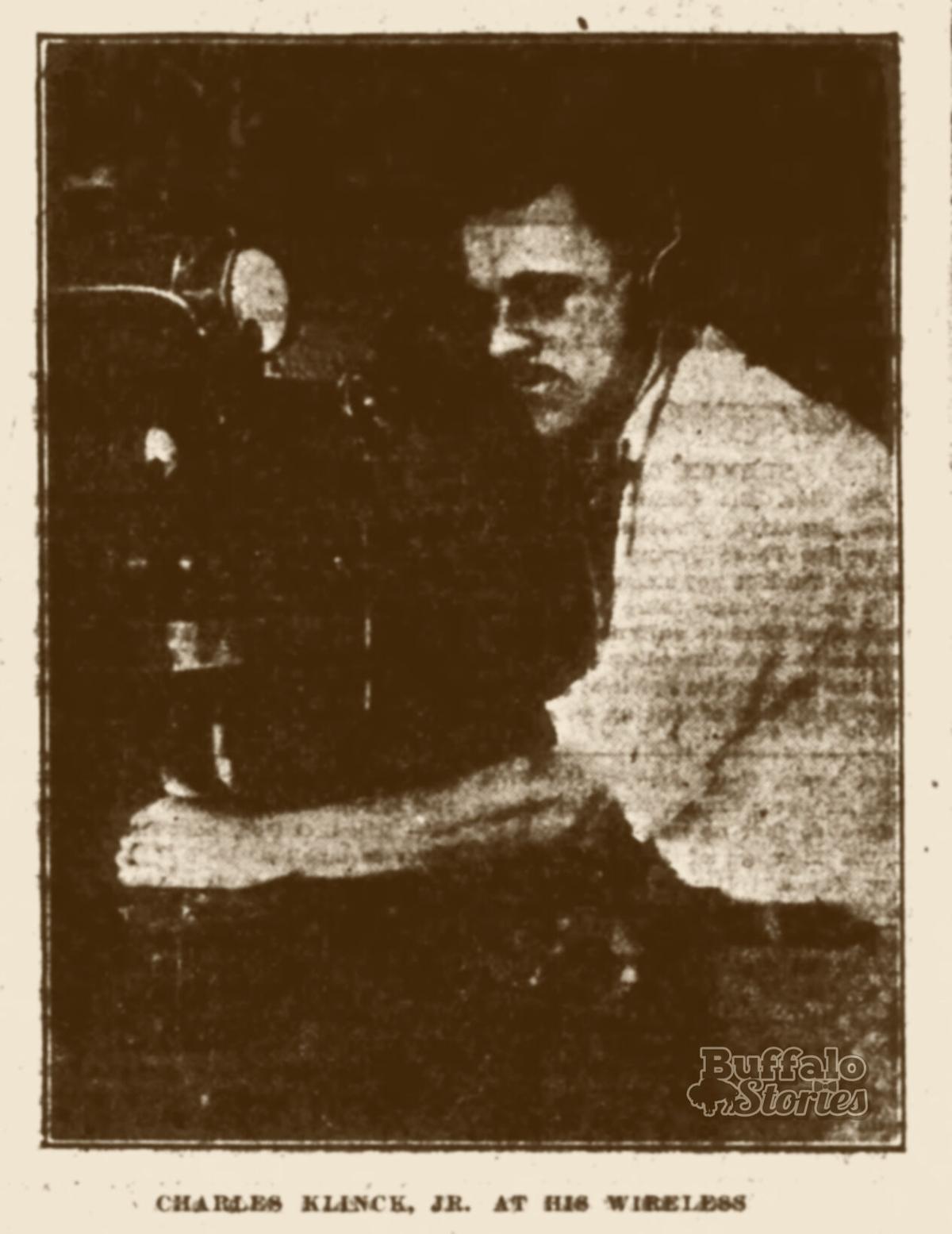 Buffalo radio pioneer Charles Klinck at his radio transmitter on West Parade Avenue, weeks before “the birth of modern radio” in 1920. 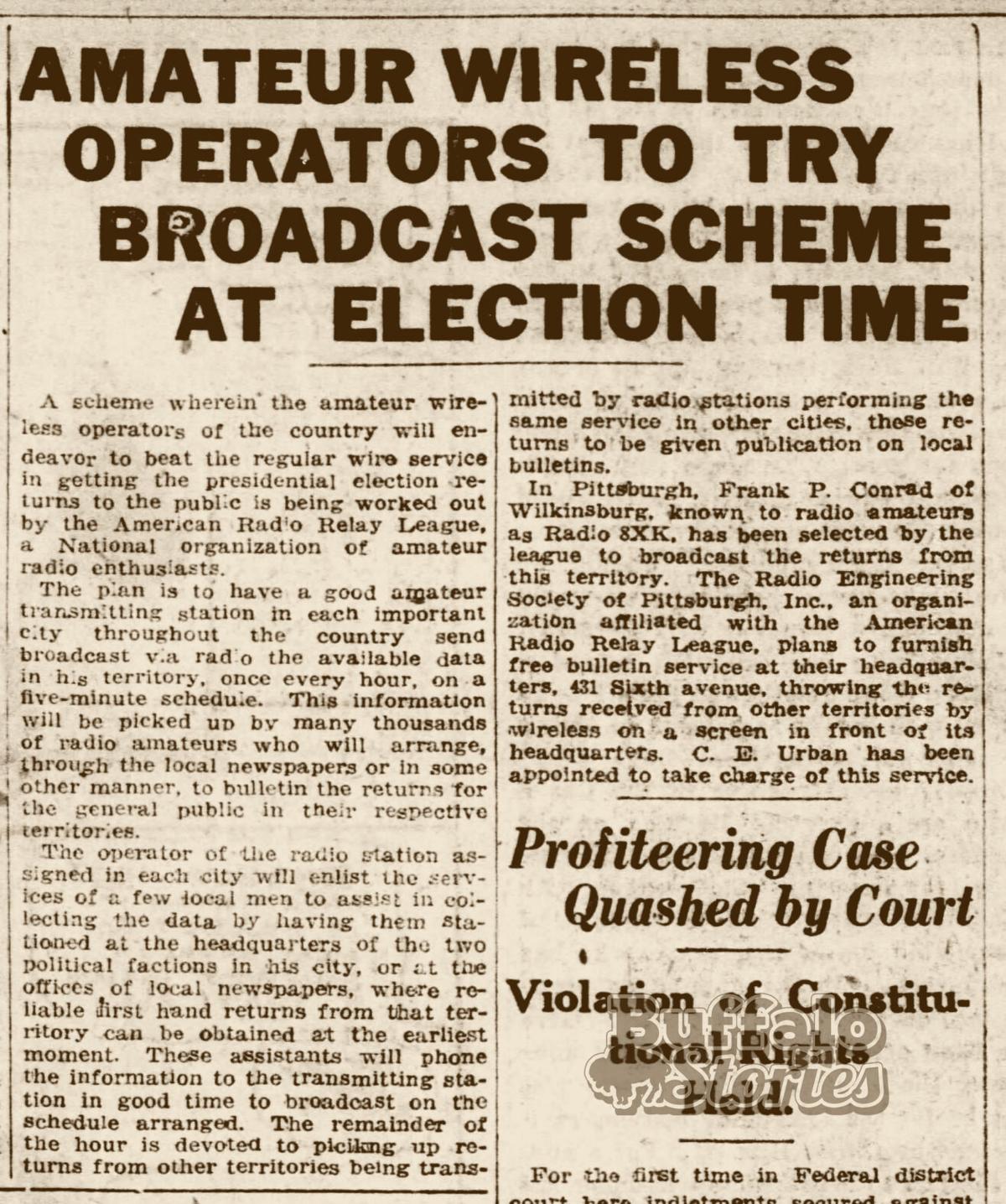 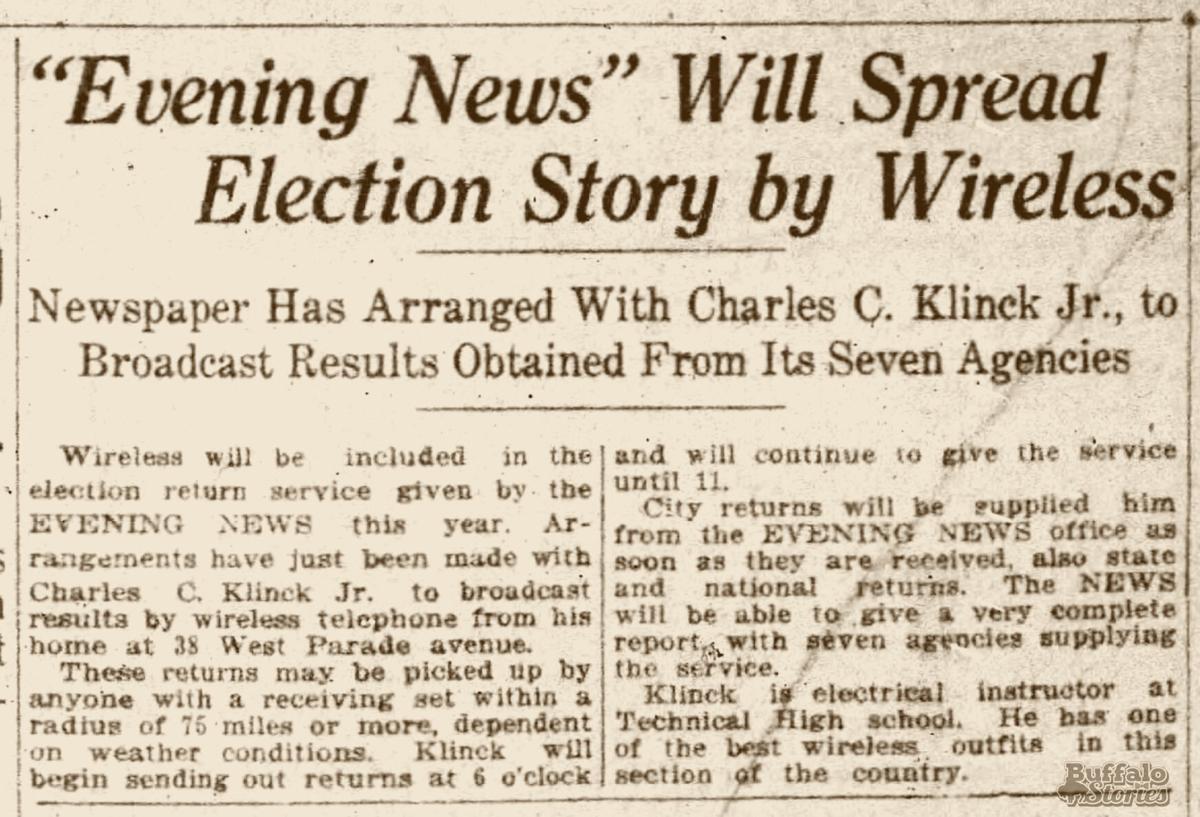