For only one memorable season, there was a Buffalo entry in the NAHL, the Buffalo Norsemen.

The epic end of the Norsemen’s single year of operation – a vicious playoff series against the Johnstown Jets – remains unparalleled in the annals of goon hockey lore, especially since the matchup inspired some of the scenes and plotlines in the movie which would begin shooting only weeks after the almost unbelievable events of that playoff series.

Norsemen player-coach Guy Trottier – a veteran of the old AHL Buffalo Bisons – called the league a “hackers and smackers organization.”

Trottier, who scored 55 goals for the Bisons in the 1969-70 season, had relied on the scoring touch for most of his career – but was also ready to jump in the fray.  After a regular season 6-3 loss to the Jets, Trottier complained about bad officiating with a threat to the linesmen.

“One day, I'm gonna knock one of those suckers down and he's not gonna get up. He's not going to get up and I'm gonna get one before my career ends," said Trottier as quoted in the Tonawanda News.

The Norsemen were treated with special hometown status by the Tonawanda News. The Norsemen played a couple of home games at Memorial Auditorium – but the team’s home rink was the Tonawanda Sports Center on Ridge Road near Payne Avenue in North Tonawanda.

On occasion, even the NTPD became involved, like when the player-coach of the Philadelphia Firebirds was arrested after hitting a Buffalo player in the head with a stick. North Tonawanda police escorted Gregg Pilling from the building moments after the vicious hit.

“The guy took a 15 to 20 foot run and hit Charlie (Labelle) with his stick,” reported Norsemen center Claude Noel – who was later the head coach of the Columbus Blue Jackets and Vancouver Canucks.

Despite arrests, suspensions and hospitalizations throughout the regular season, the violence and goonery built to a crescendo during the last five games the Norsemen ever played – that five-game playoff series against the first-place Jets.

Because of a boat show in Johnstown’s home rink, the series started in Buffalo at Memorial Auditorium. The Norsemen won that game 5-1 and Johnstown responded in their home rink the next night with a 6-4 victory, tying the series at 1.

At the end of that Jets victory, a handful of Norsemen players remained on the ice to protest a call late in the game. Johnstown fans hurled abuse and debris at the players and Norsemen defenseman Greg Neeld – the Sabres draft pick who was ruled ineligible for the NHL because of blindness in one eye – answered the fans by throwing his stick into the stands.

The stick-throwing led to a two-game suspension for Neeld, starting with Game 3 of the series – where the Jets would take a 2-1 series lead winning 6-2. In that game, Trottier received a game misconduct and was suspended for Game 4 after arguing with officials.

Game 4 returned to Western New York and the Tonawanda Sports Center and the wheels began to fly off. The Courier-Express called the game “a penalty-packed thriller.” As the horn blew to end the first period, there were already 67 minutes in penalties.

In his book “Slap Shot Original,” Dave Hanson – who played for the Johnstown Jets and starred as one of the Hanson brothers in “Slap Shot” – wrote that the reason that things got out of hand that night was because still-suspended Neeld and Norsemen fans began harassing a Black player on the Johnstown team.

Hank Taylor was the Jets’ leading scorer in the regular season with 50 goals and 93 points. Hanson wrote that fans held a sign in the North Tonawanda rink that night that said Taylor should be playing basketball, not hockey.

As the players left the ice after a 3-2 Norsemen win, Jets center Vern Campigotto started screaming at Neeld, who was in street clothes, sitting with reporters in the stands.

“Hey you one-eyed bastard,” Campigotto screamed. “We’re going to run you out of the building Saturday.”

As Neeld and Campigotto yelled at one another, Johnstown winger Steve Carlson – who also played one of the Hanson brothers in "Slap Shot" – came off the ice and threw a punch at Neeld.

But Carlson’s punch missed – and hit Tonawanda News reporter Mike Billoni on the side of the head, sending his glasses flying.

“As I bent over to look for my glasses, a crowd of Johnstown players surrounded me. Fearing for my life, I grabbed a stick and started backing up, until I reached the fourth stair leading to the press box,” wrote Billoni in the Tonawanda paper the day after the incident. Billoni, who would later become the general manager of the Buffalo Bisons, refused calls from Carlson to “come down and fight.”

In his book, Dave Hanson says he left the building that night in a police car “before he could nail” Neeld. Billoni wrote that day that Hanson was taken away in cuffs because he speared Neeld in the stomach.

Two days later, Neeld was back in the lineup for Buffalo for the decisive Game 5, but Hanson wrote that pay back during the game might be difficult. After losing an eye during an incident earlier in his hockey career, Neeld always wore a helmet and face shield that blocked punches during a fight.

During pregame warmups, when Neeld skated helmet-free, Campigotto crossed center ice and waylaid Neeld, cross-checking him from behind. Hanson and Carlson joined in the bludgeoning of Neeld, who was left unconscious.

Steve Carlson had a cast on his right arm and used it as a cudgel during the beating. Carlson then turned on Norsemen winger Charlie Labelle and used the cast to badly bruise his face.

Eventually, every player from each team was paired off in fights. Neeld left on a stretcher. Both he and Labelle were taken to Lee Hospital in Johnstown for treatment.

Norsemen coach Guy Trottier refused to allow his team to take to the ice after two of his players left the arena in an ambulance. Officials started the game clock at the appointed time, and after the Norsemen wouldn’t take the ice after five minutes had passed, they forfeited the game by league rules.

“They brought in some goons to rough us up,” said Marshall.

Johnstown police, complete with K9 units, lined a path for the Norsemen to make it onto their bus.

That pregame skate was the last time the Norsemen ever took to the ice. After looking for investors for a while, the team eventually folded.

While the name Buffalo Norsemen might not roll off the tongues of those who appreciate the history of hockey, the goonism that ended the team’s existence was the stuff movies were made of – literally.

When you watch "Slap Shot" and see the pregame brawl between the Peterborough Patriots and the Charlestown Chiefs, you now know that only weeks before the scene was shot, many of the “actors” on the ice had taken the lead in a very similar looking fracas as players for the Johnstown Jets jumped players for the Buffalo Norsemen.

"It's not really acting because it’s natural," Dave Hanson said just before the movie’s release. "Most of the things that go on might be exaggerated a little, but it has happened to us.” 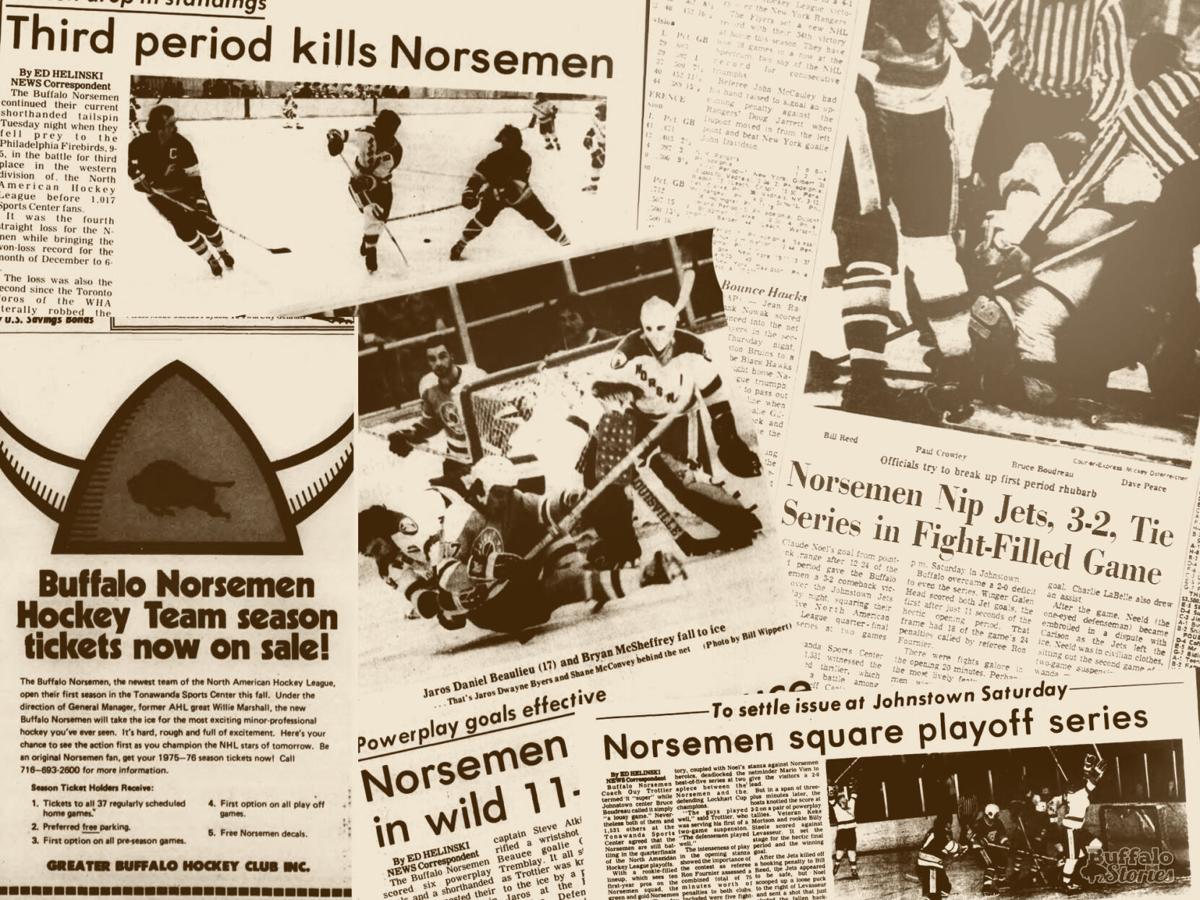 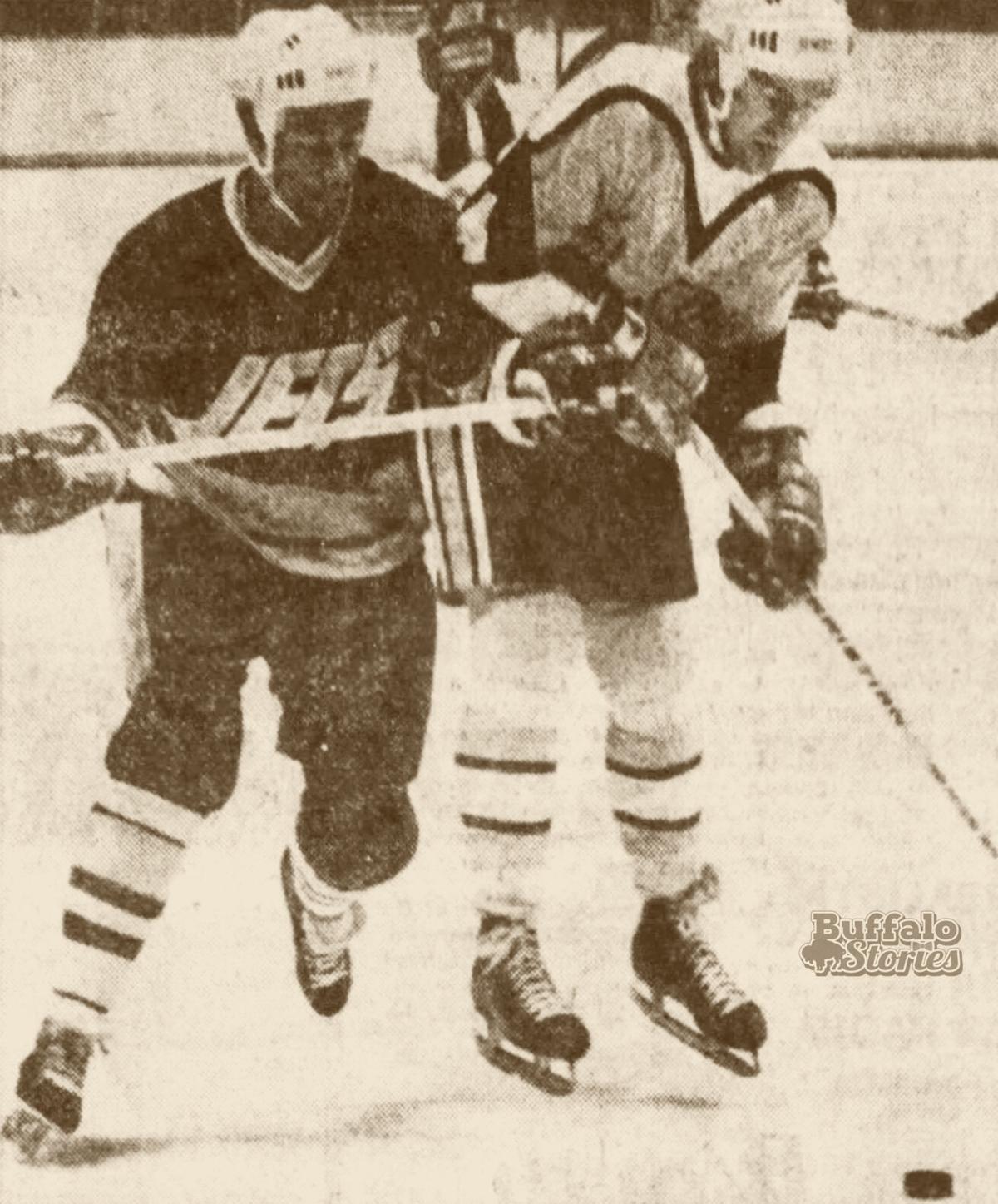 Hank Taylor, left, was the Johnstown Jets’ leading scorer during the 1975-76 season. 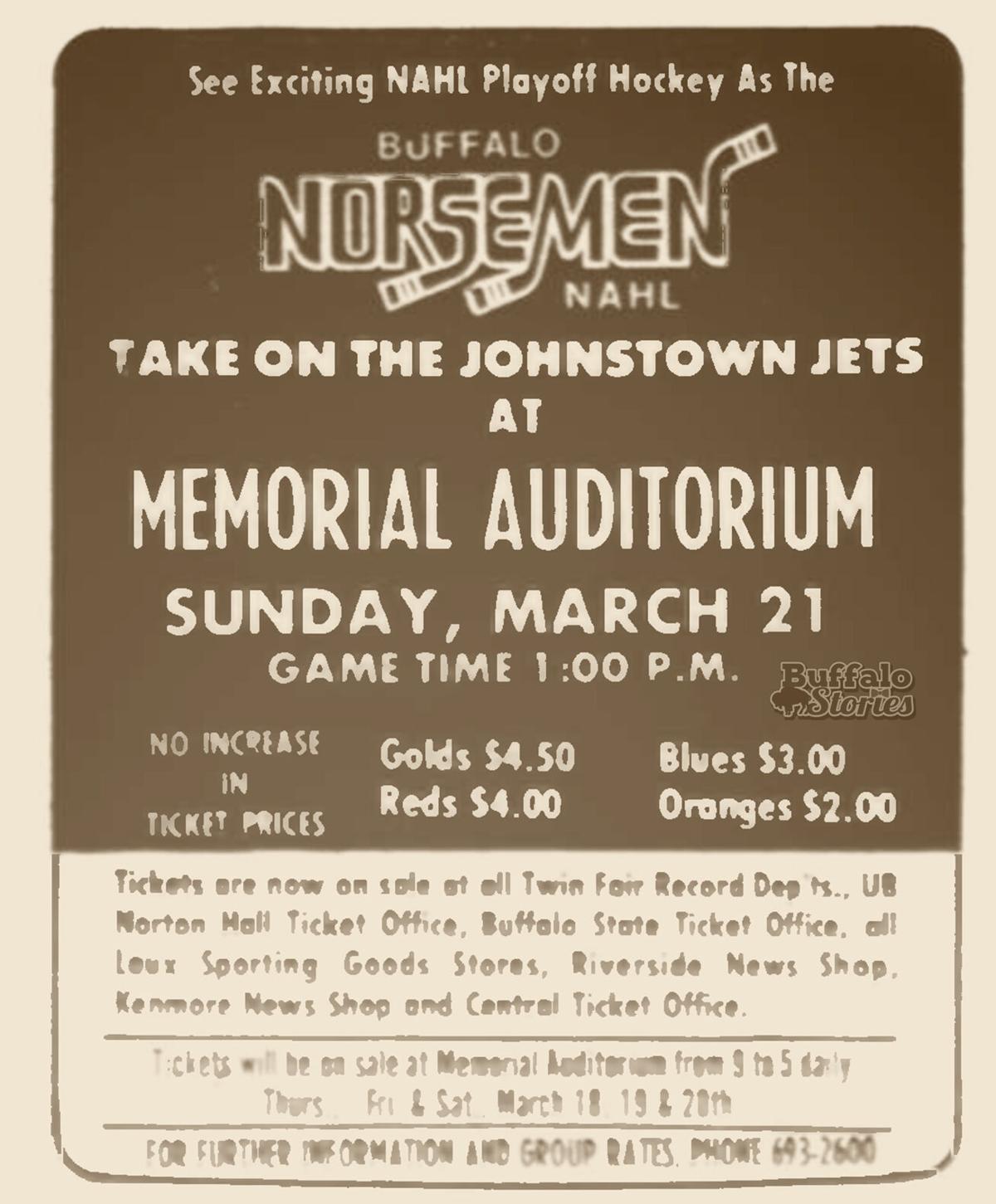 The Buffalo Norsemen ended its only year in existence with a March 1976 playoff series against the Johnstown Jets. Two months later, shooting began on the motion picture “Slap Shot.”