Aug. 6, 1890: Buffalo man is first to be executed by electric chair
0 comments
Share this
Support this work for $1 a month
By Sara Meehan

On this date in 1890, a Buffalo man had the dubious honor of being the first man to meet his death on the electric chair. And that isn't Buffalo's only tie to the chair.

The electric chair was the brainchild of Buffalo dentist Alfred P. Southwick.

The last execution to take place in New York was that of Eddie Mays in 1963; Mays died by the electric chair. The death penalty was illegal for years after that. More recently, then-Gov. George Pataki made it legal again in 1995, but in 2004, the New York Court of Appeals ruled it unconstitutional. New York, in total, has executed 1,130 people, according to DeathPenaltyInfo.org.

In this story published Aug. 5, 1979, The News relived the scene of William Kemmler's death and took a look back at the history of the death penalty.

THE HEAVY OAK CHAIR cast a gruesome shadow across the stark room at Auburn State Prison on that late summer morning of Aug. 6, 1890. The prisoner was led in quietly before an anxious gallery of 21 witnesses.

“Don’t let them experiment on me more than they ought to,” pleaded William Kemmler. He was a murderer, convicted of the hatchet slaying of another man’s wife.

Kemmler sat down in the square-framed wooden chair with a high, slightly sloping back and broad arms. Electrodes were attached to his head and one leg. Erie County Sheriff’s Deputy Joseph Veiling checked the straps holding the prisoner in place.

“Goodbye Willie,” Deputy Veiling cried as he rapped twice on a door to signal the man at the switch in the next room. A whistling sound was heard and some of the witnesses averted their eyes from the man strapped in the chair.

Kemmler’s body stiffened, his skin appeared to turn pale and then dark red. The fingers of his left hand appeared to grasp the chair arm.

After 17 seconds, the high-voltage electric current was turned off and a prison doctor intoned, “I declare this man dead.”

The next instant a deep groan was heard from Kemmler, and some of the witnesses began to scream, “Turn on the current!” A second flash of electricity was sent through the electrodes. After two minutes the executive chamber filled with the smell of burning flesh.

Two of the witnesses fainted. Several others were overcome with severe attacks of nausea. As they filed out, Sheriff Oliver A. Jenkins was heard to say, “I never want to see another sign such as that.”

Among those involved in this first execution by electricity was Dr. Alfred P. Southwick, a prominent Buffalo dentist who is credited with inventing the electric chair.

Dr. Southwick and another Buffalo physician, Dr. George E. Fell, had been experimenting with electrocution as a more humanitarian way of executing convicted capital criminals.

The first high-voltage execution was not well received. William Kemmler was an illiterate vegetable peddler, a mentally retarded resident of a Buffalo shanty. He was convicted on May 19, 1889, of the sordid hatchet murder of Mrs. Tillie Ziegler, who was described as “a woman of easy virtue.”

The day after the execution, in front-page stories, Buffalo newspapers called the event a “historic bungle.” Other criticisms labeled it as “disgusting, sickening and inhuman.”

Click on the images below to view larger versions and continue reading. 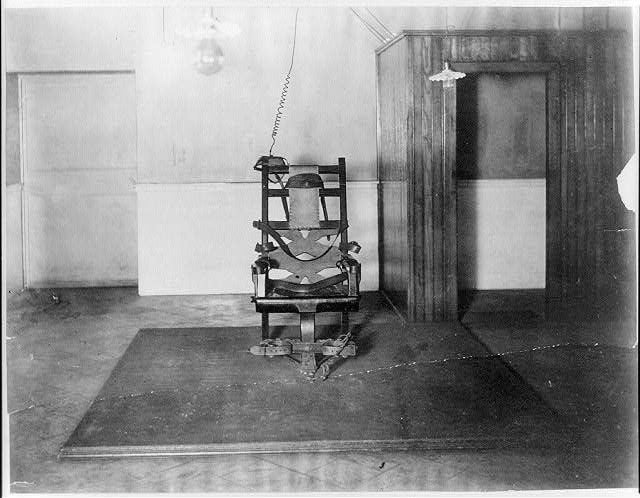 An electric chair at Sing Sing prison, pictured in 1915. (Photo courtesy of the Library of Congress) 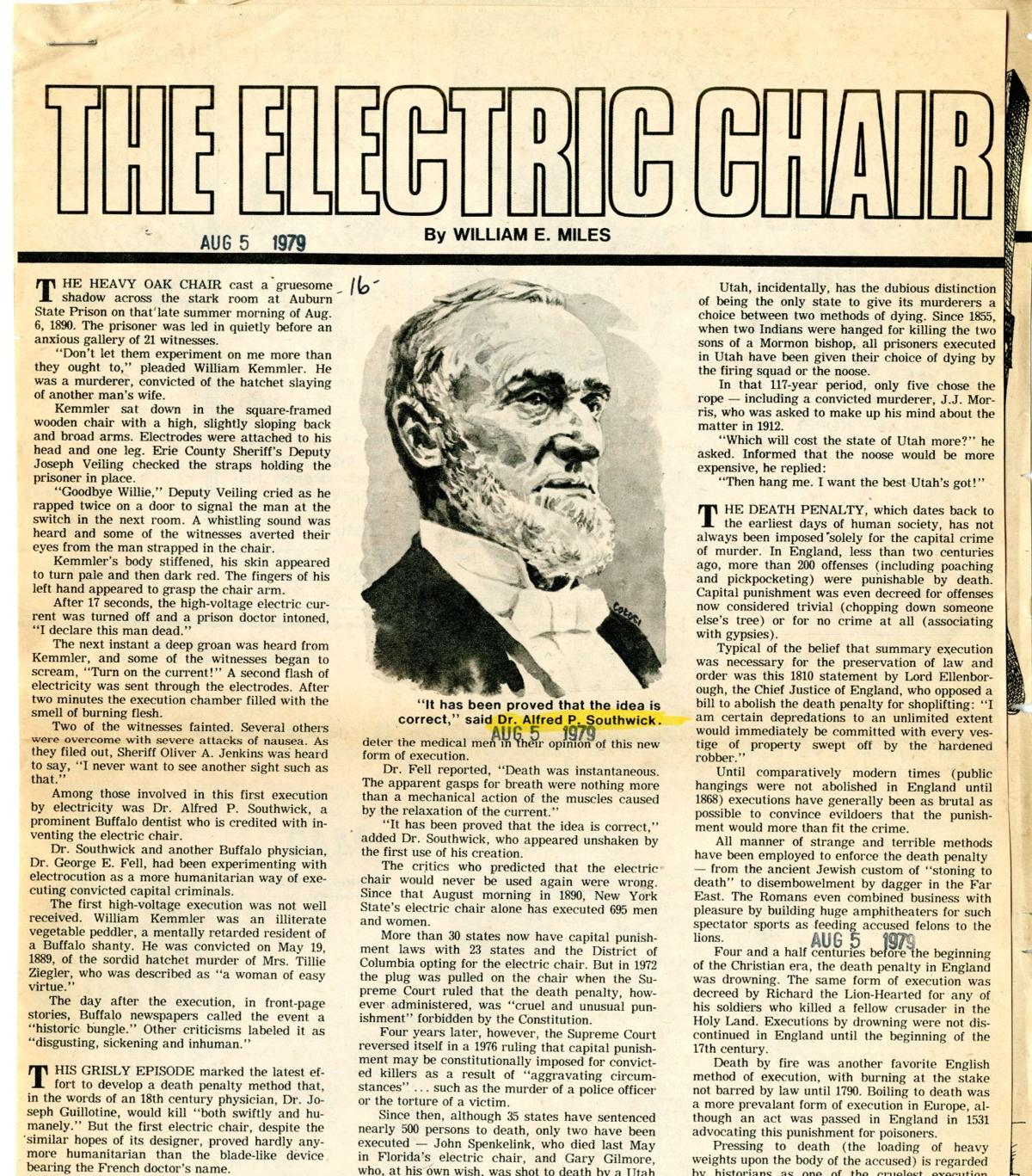 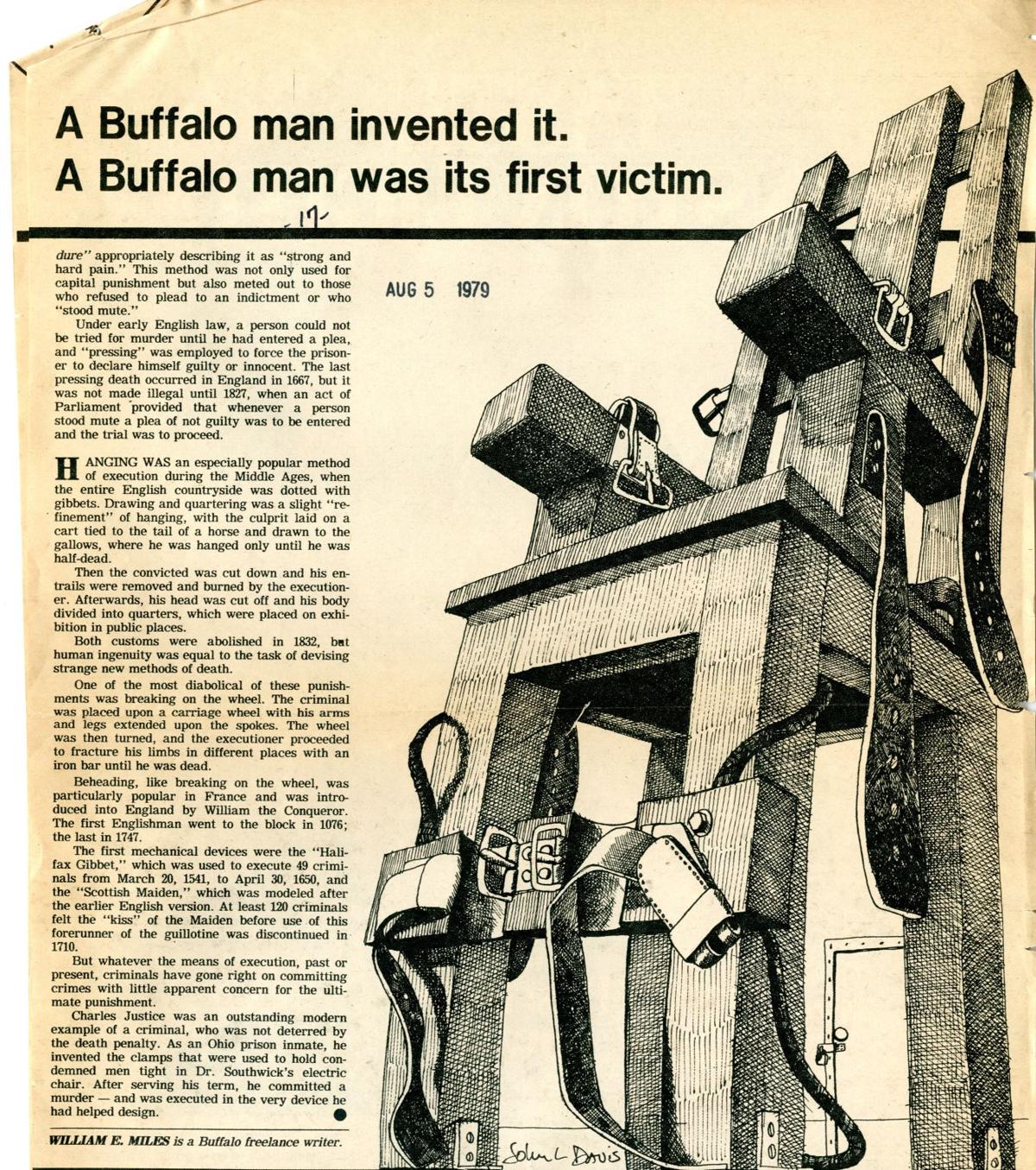