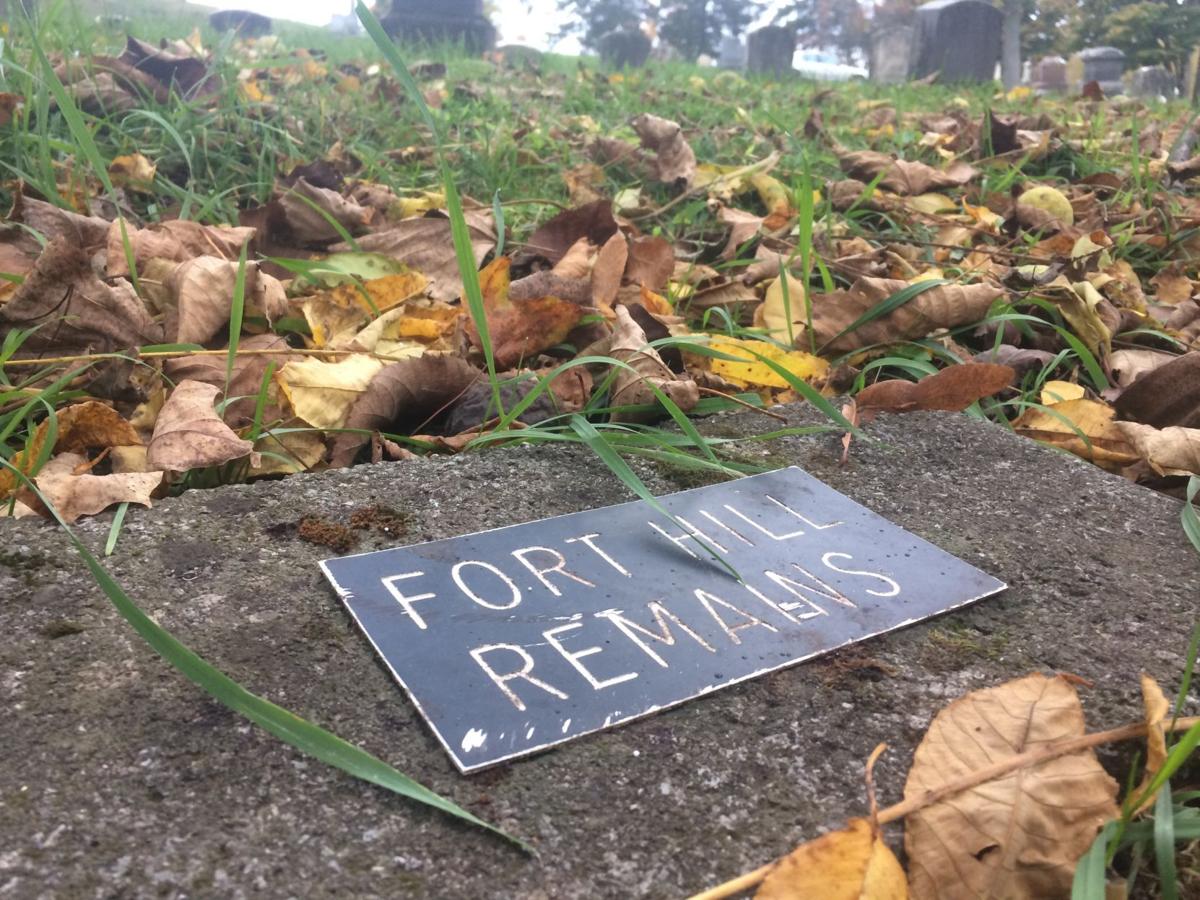 Hundreds of prisoners - including Leon Czolgosz, who killed President William McKinley in Buffalo - are said to be buried at a mass grave at Soule Cemetery, near Auburn, N.Y. The discovery of remains in a man's Auburn yard has led to questions about how many bodies actually were moved. (Sean Kirst/provided image) 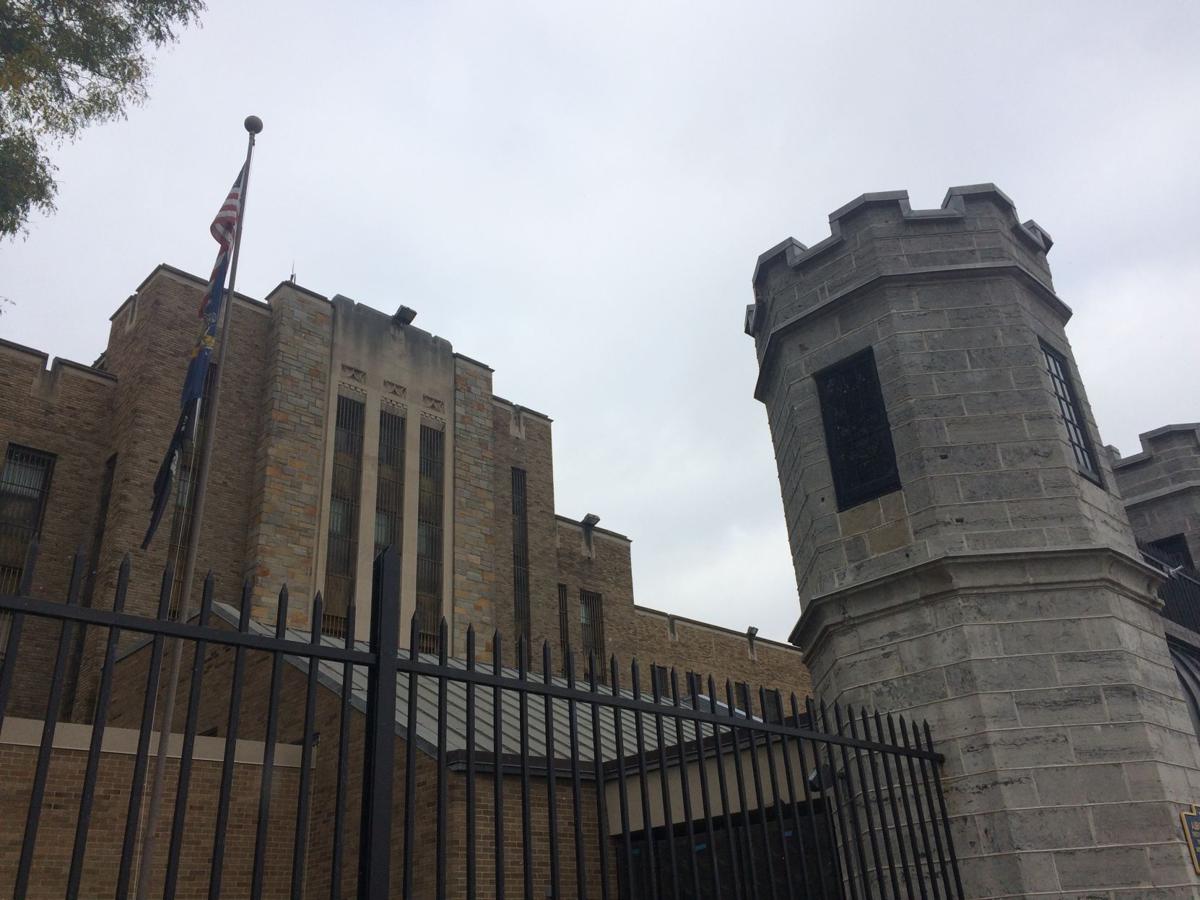 The state prison at Auburn: The unclaimed remains of prisoners, including many who died by execution, were once buried in a state lot, near Fitch Avenue. (Sean Kirst/provided image) 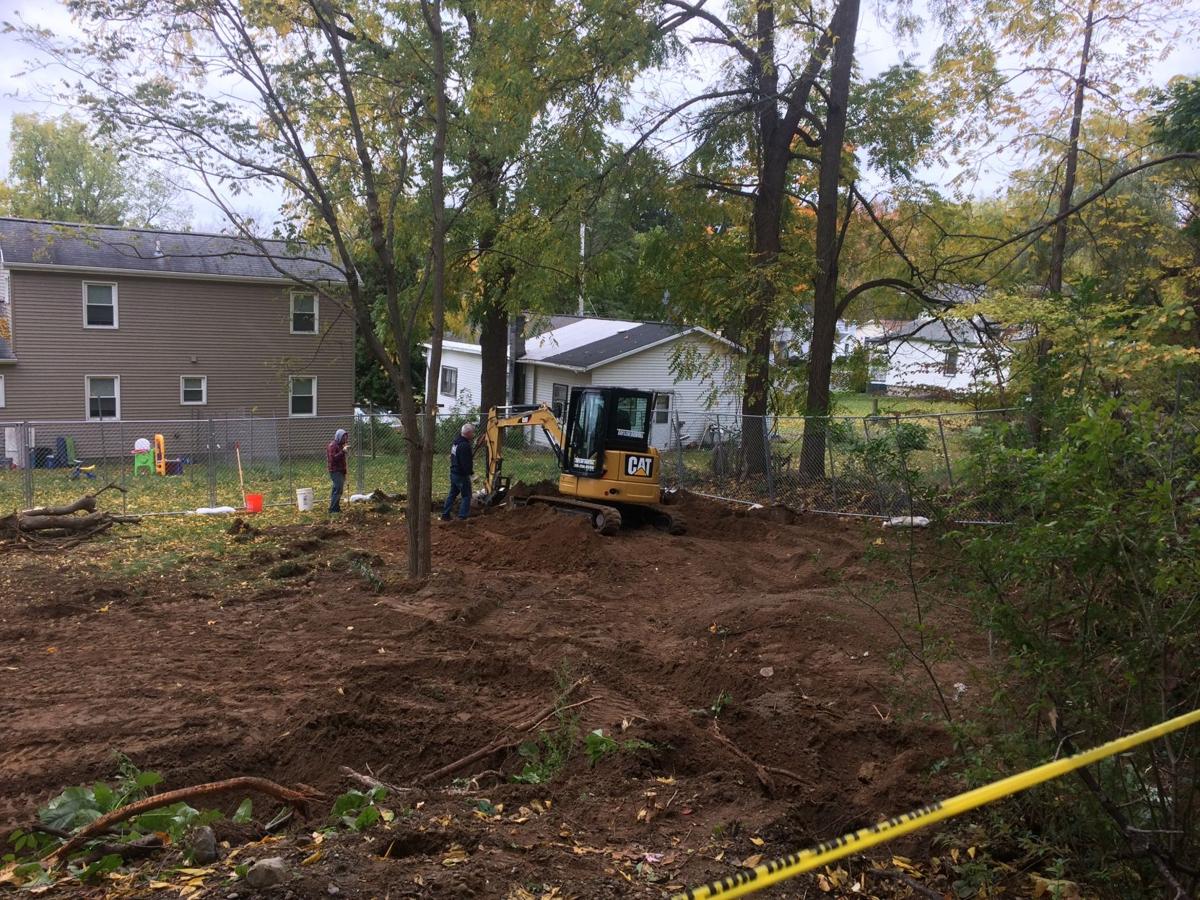 A view from Fort Hill Cemetery in Auburn as workers excavate for the remains of prisoners in the yard of Eric and Alicia Johnson. (Sean Kirst/Provided image) 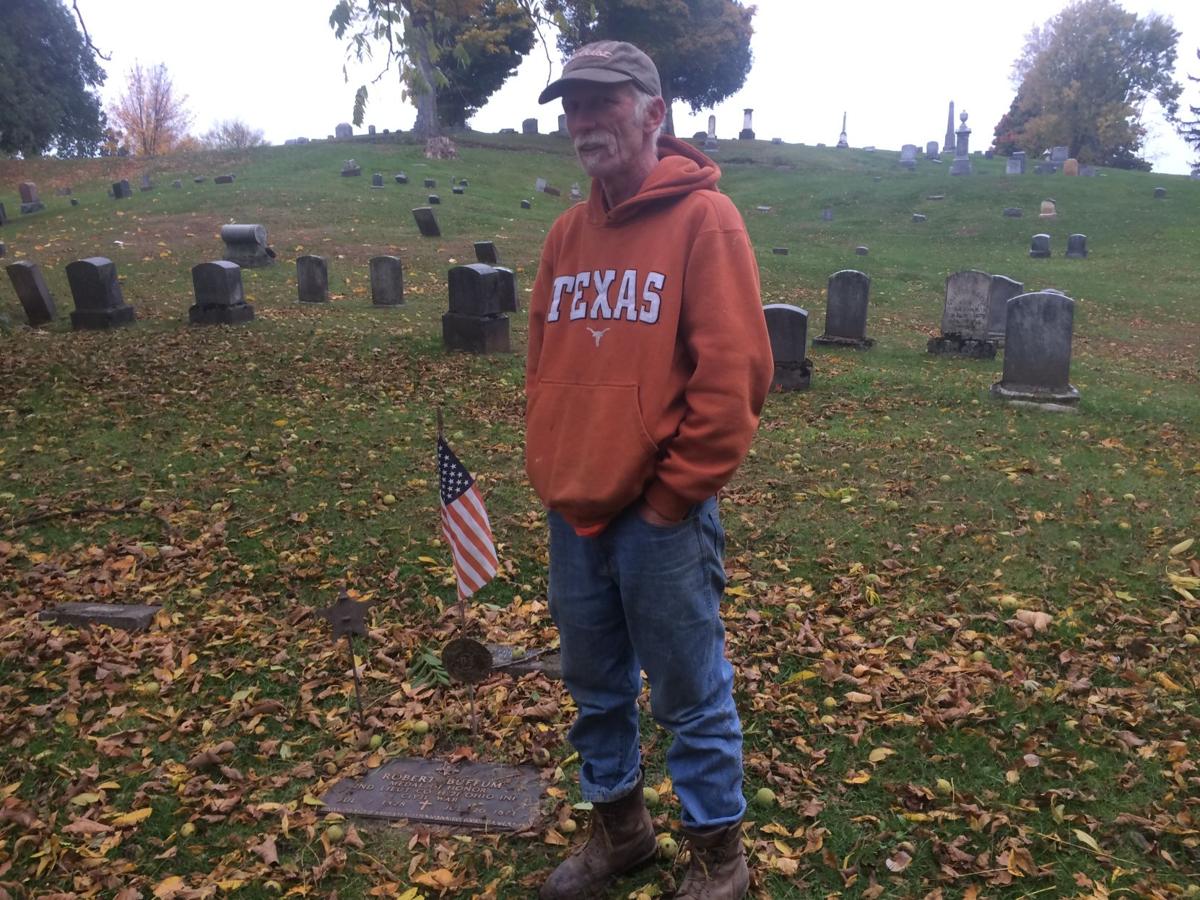 Jimmy Buschman, supervisor of Soule Cemetery, near Auburn, with a marker for Lt. Robert Buffum, a Medal of Honor winner, in the Auburn prison lot. Leon Czolgosz, assassin of President William McKinley is said to be buried here - although that history is now being thrown into question. (Sean Kirst/submitted image)

For more than a decade, Jim Buschman has supervised the Soule Cemetery, in Cayuga County. Throughout the years, he’s always assumed that some memorable historical figures were buried in a distant corner of a graveyard, where the state once interred hundreds of unidentified remains removed from another cemetery used by the 199-year-old state prison, in nearby Auburn.

Buschman, for instance, has greeted the occasional historian seeking the unmarked grave of Leon Czolgosz, the man executed 115 years ago Saturday for the 1901 assassination of President William McKinley, in Buffalo.

William Kemmler, a Buffalo man who in 1890 was the first prisoner put to death in the electric chair – the grim invention of Dr. Alfred Southwick, a Buffalo dentist – is also said to be buried in that lot. So is Lt. Robert Buffum, a Civil War Medal of Honor winner whose struggles with alcoholism and mental illness ended in a conviction for murder, and later in his suicide in prison – before his remains were said to be moved from a Fitch Avenue lot and re-interred at Soule, according to a New York Correction history website.

All of it makes for a Halloween mystery of sobering, true-to-life dimensions: These prisoners, their remains unclaimed by relatives, were originally buried in the late 19th and early 20th centuries in an Auburn prison lot a few blocks away from the prison itself. The lot was between Fitch Avenue and Fort Hill Cemetery, final resting place of such legends as Harriet Tubman and William Seward, Lincoln's secretary of state.

Hobert Romig, a historical researcher who serves on the Fort Hill board of directors, said the state in 1909 sold the land used as the prison lot. Over the next 30 years, Romig said, more than 300 sets of prisoner remains were supposedly moved to a mass grave at Soule Cemetery, also maintained by the city in a quiet spot near rural cornfields.

The problem: “It doesn’t appear they tried that hard,” said Eileen McHugh, Auburn’s city historian, speaking of the crews that moved the bodies.

Last summer, Eric Johnson II, a 29-year-old resident of Fitch Avenue, was doing some work in his yard with a Bobcat excavator when he began turning up bones. “At first I thought it was a deer,” Johnson said, an assumption that changed when he found a piece of a human skull.

Johnson called the police. The result was the quick discovery of what Dr. Robert Stoppacher, Onondaga County’s chief medical examiner, described in an email this week: “The minimum number of individuals … was determined to be 4.”

Those remains were later buried at a cemetery at the state correctional facility at Marcy, in Oneida County, after a service led by a chaplain, according to the state department of corrections and community supervision. Stoppacher also wrote that while “it is possible that some of the skeletal remains are those of Leon Czolgosz, there are no specific findings to either confirm or refute that possibility.”

He did not add any details to that haunting statement. Yet a crew hired by the state returned to the site this week – and quickly began finding more remains in a relatively tiny area. Johnson said he was told the excavators have already found at least 10 more sets of remains in his yard. The original state prison cemetery lot once stretched from Johnson's yard to what is now a Fort Hill access road to Fitch Avenue, and Romig noted that legend – a legend he does not believe – always maintained that Czolgosz was buried under the road.

Before this week’s discovery, Romig said, he would have guessed the chances were 99-to-1 against more prisoners still being in the ground near Fitch Avenue.

He's confident now that more remains will be found, although it is impossible to speculate about how many. He noted the workers who originally moved the remains were working with spades and shovels, not modern excavating equipment, making the job far more difficult. And he said the records detailing many of the burials were destroyed in a 1929 prison riot.

Jerry DelFavero, supervisor of Fort Hill and a retired superintendent of public works for the city, stood this week at the cemetery fence and gestured toward the sprawling expanse of the original prison lot. He quietly wondered how many remains might still be discovered within that zone.

Czolgosz “could still be there,” said Johnson, the Fitch Avenue homeowner most affected by the discovery, speaking with somber wonder of what's under his back yard. He and his wife, Alicia, parents of a 2-year-old, have done their best to take the macabre discovery in stride. They have a jack o’lantern decoration on their door for Halloween, even as they live out the holiday like few others in their community.

Johnson said he and Alicia get weary of gawkers staring at the yard from the road or from the fence of the nearby cemetery. With their yard torn apart, they had to erect a temporary fence simply so they could let out their two dogs. Johnson has talked with a lawyer about the situation, and he hopes the state will eventually erect a privacy fence around his yard to discourage onlookers.

He doesn’t know the answer to a question now being asked throughout Auburn: Will the state continue digging in other yards that were part of the original lot where – more than a century ago – the unclaimed remains of prisoners were once buried?

In a statement, a state corrections spokesman said only that state officials are “continuing to work with Mr. Johnson and the city in an ongoing effort to identify, remove and appropriately rebury any remains found on his property.”

For now, little information is being released about the remains themselves. Stoppacher wrote that “at present, there is no plan to perform DNA analysis” on bodies pulled from Johnson’s yard. Historians say at least  21 men buried in the original lot were early subjects of death by electrocution, including Czolgosz, whose final disposition was particularly grim.

Less than two months after shooting McKinley, he was electrocuted Oct. 29, 1901, in Auburn. The late John Miskell, a deputy prison superintendent who extensively researched Auburn penal history, wrote that “a small group of curious Auburnians … assembled to watch as the prison-made black stained coffin (for Czolgosz) was lowered into the ground.”

Miskell wrote that state officials – afraid that thieves would try to steal and display Czolgosz’s body – poured five bushels of lime, 20 buckets of water and sulphuric acid onto the casket to try and dissolve the remains, causing “a cloud of smoke and steam (to seep) through the ground and (rise) 50 feet into the air after the grave was closed.”

Yet Dr. Mary Jumbelic, a former chief Onondaga County medical examiner, said it is impossible to say – without a thorough investigation – whether the officials were successful in what they sought to do.

“There could still be remains there, sure,” Jumbelic said.

At this point, there is also no definitive answer as to the whereabouts of others buried in unmarked graves, including Buffum – a Civil War hero who was imprisoned, Miskell wrote, after he shot a man who allegedly "vilified” slain President Abraham Lincoln – and Kemmler, the Buffalo man electrocuted after he was convicted of killing a woman with an axe.

McHugh, the Auburn historian, said the story takes on a particular intensity in her little city, which lives in the shadow of a towering stone prison. “All of us drive past it every day,” she said. “For most people, once (prisoners) go to prison, they go away. For us, they come here.”

As for Jimmy Buschman, gentle supervisor of Soule Cemetery, none of the speculation will change his routine or his sense of responsibility. Buschman is the kind of guy who keeps bird nests on a cabinet in his office, because he sees them as natural works of art. His job, he said, is to show respect for the “5,000 stories” contained in the graveyard. He and his co-workers still mow and maintain the old state section that contains the unidentified remains of prisoners, burials that continued in some cases into the 1990s.

“It’s kind of like a lost section,” Buschman said. Only a few stones carry names, and many of those letters are obscured by moss. A couple of stones carry simple markers that say:

No matter who it is, someone is there. Buschman, often the only visitor, rakes up debris and cuts the grass.

Sean Kirst is a contributing columnist for The Buffalo News. Email him at seanpeterkirst@gmail.com and read more of his work in this archive.

Whenever Democrats sing 'Happy Days Are Here Again,' they have a Buffalo guy to thank

The lyrics to the unofficial theme song for the Democratic party were written by Buffalo's own Jack Yellen, writes Erik Brady.

Hundreds of prisoners - including Leon Czolgosz, who killed President William McKinley in Buffalo - are said to be buried at a mass grave at Soule Cemetery, near Auburn, N.Y. The discovery of remains in a man's Auburn yard has led to questions about how many bodies actually were moved. (Sean Kirst/provided image)

The state prison at Auburn: The unclaimed remains of prisoners, including many who died by execution, were once buried in a state lot, near Fitch Avenue. (Sean Kirst/provided image)

A view from Fort Hill Cemetery in Auburn as workers excavate for the remains of prisoners in the yard of Eric and Alicia Johnson. (Sean Kirst/Provided image)

Jimmy Buschman, supervisor of Soule Cemetery, near Auburn, with a marker for Lt. Robert Buffum, a Medal of Honor winner, in the Auburn prison lot. Leon Czolgosz, assassin of President William McKinley is said to be buried here - although that history is now being thrown into question. (Sean Kirst/submitted image)