When the hottest days of summer strike, those lucky enough to have air conditioning are thankful for the invention dreamed up in Buffalo by Willis Carrier more than a century ago.

But in 1902, as Carrier sat at his draft table devising a method to clean and remove humidity from the air, his home didn’t even have a modern refrigerator.

In Buffalo and around the world, well into the 1920s, ice was the only manner of refrigeration for most folks.

That meant regular deliveries from the iceman, and more often than not in Buffalo, that man came from Webster-Citizens Ice.

As industry grew around the Great Lakes, the water – and especially the ice harvested from the surface – became growingly impure and “deleterious to public health.”

In the days before electric refrigeration and the ability to freeze water to make artificial ice, the cutting, moving, and storage of ice was important for industry and public

Nearly as soon as the power of the Niagara was harnessed, ice was again a forerunner in using that power to create “artificial ice.”

It was no small feat. A 1910 piece on Webster-Citizens in the Buffalo Commercial starts, “This company has achieved what for centuries thousands of the greatest scientists have been working upon – to turn water into sparkling ice, absolutely pure, at the smallest cost to the consumer.”

They were manufacturing 60,000 tons of ice – or roughly 4.8 million 25-pound blocks delivered to homes and businesses a couple of times a week.

Webster-Citizens had manufacturing and warehouse facilities all over the city, including on Mechanic Street near Terrace (about where WKBW-TV is today), Essex Street near Richmond (where the ghosted signs of the Webster-Citizens Ice Co. are still visible on the building), Swan and Jefferson streets, Fillmore Avenue at the Pennsylvania Railroad, Delavan Avenue at the New York Central tracks, and Niagara Street at the Grand Trunk Railway tracks in Black Rock.

In 1911, Webster-Citizens had “150 familiar yellow wagons” rolling through the streets of Buffalo, selling ice by the 20-pound block to customers either daily, twice a week or once a week. A subscriber could flag down the iceman anytime they needed an extra block, whether it was their delivery day or not.

While the ultra-pure manufactured ice was recommended for any kind of human consumption, Webster-Citizens was still harvesting ice for cooling purposes from Chautauqua, Lime and Cassadaga lakes as well as Lake Simcoe in Ontario.

While modern refrigeration was still at least a decade away for most Buffalonians, on a hot day in 1921, 250 pounds of free ice was used as an enticement to buy a new ice box from King’s Furniture store, which was in a building just south of Shea’s Buffalo on Main Street.

With the eventual melting away of the iceman’s work, a bit of the city’s fabric was lost. The men who sold ice were known as dangerous drivers and quick to cheat an unsuspecting eye on the weight of an ice block. And the same jokes that followed the milkman and the mailman followed the iceman – although in one case, an iceman’s dalliances were proven in a divorce court, in a story involving “not only the iceman, but a Victrola and a gaudy kimono.”

Charles Littlefield’s Ferguson Street neighbors testified that when the iceman called on his house every other day, “the patient horse was left to nibble such grass as he could find while the ice melted and ran out in tiny streams. In the meantime, the Victrola in the Littlefield home started playing ‘raggy’ pieces and the woman of the house could be seen dancing in the arms of the peddler of cooling cakes.”

The Courier reported that Judge Horton granted the uncontested divorce. 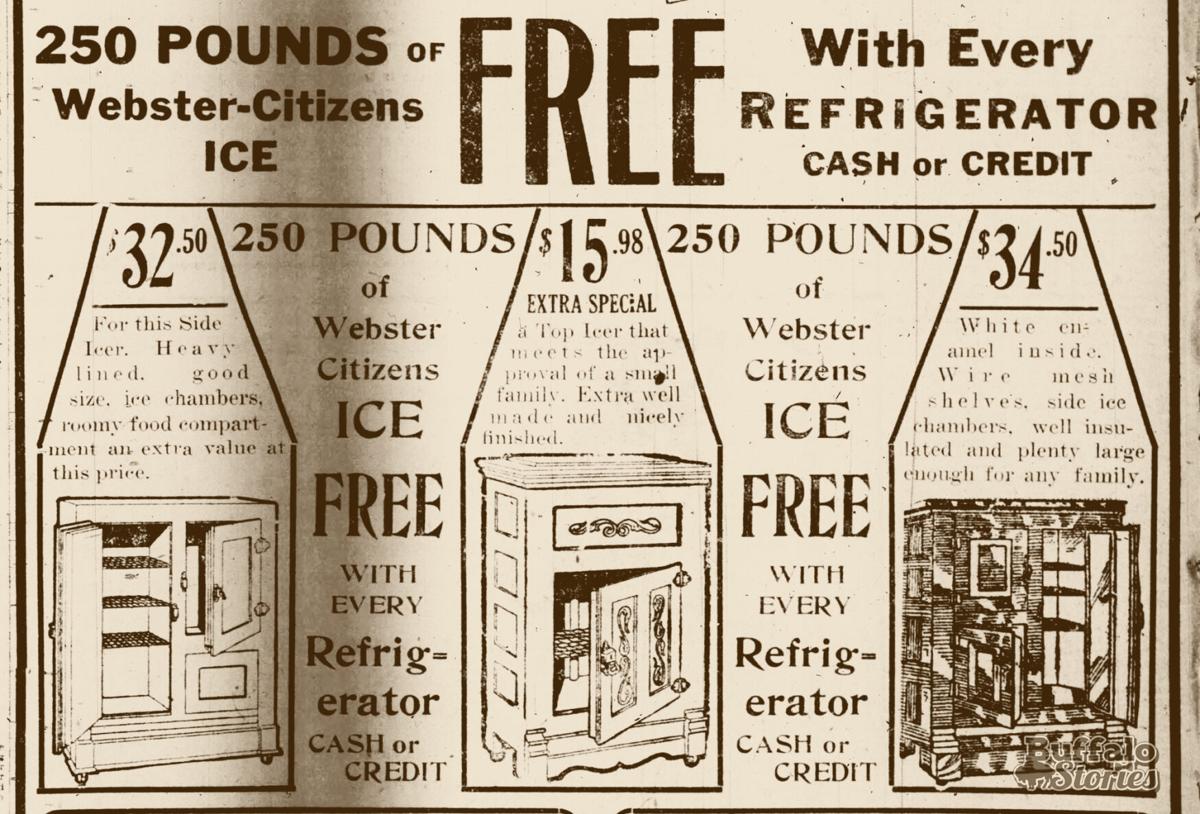 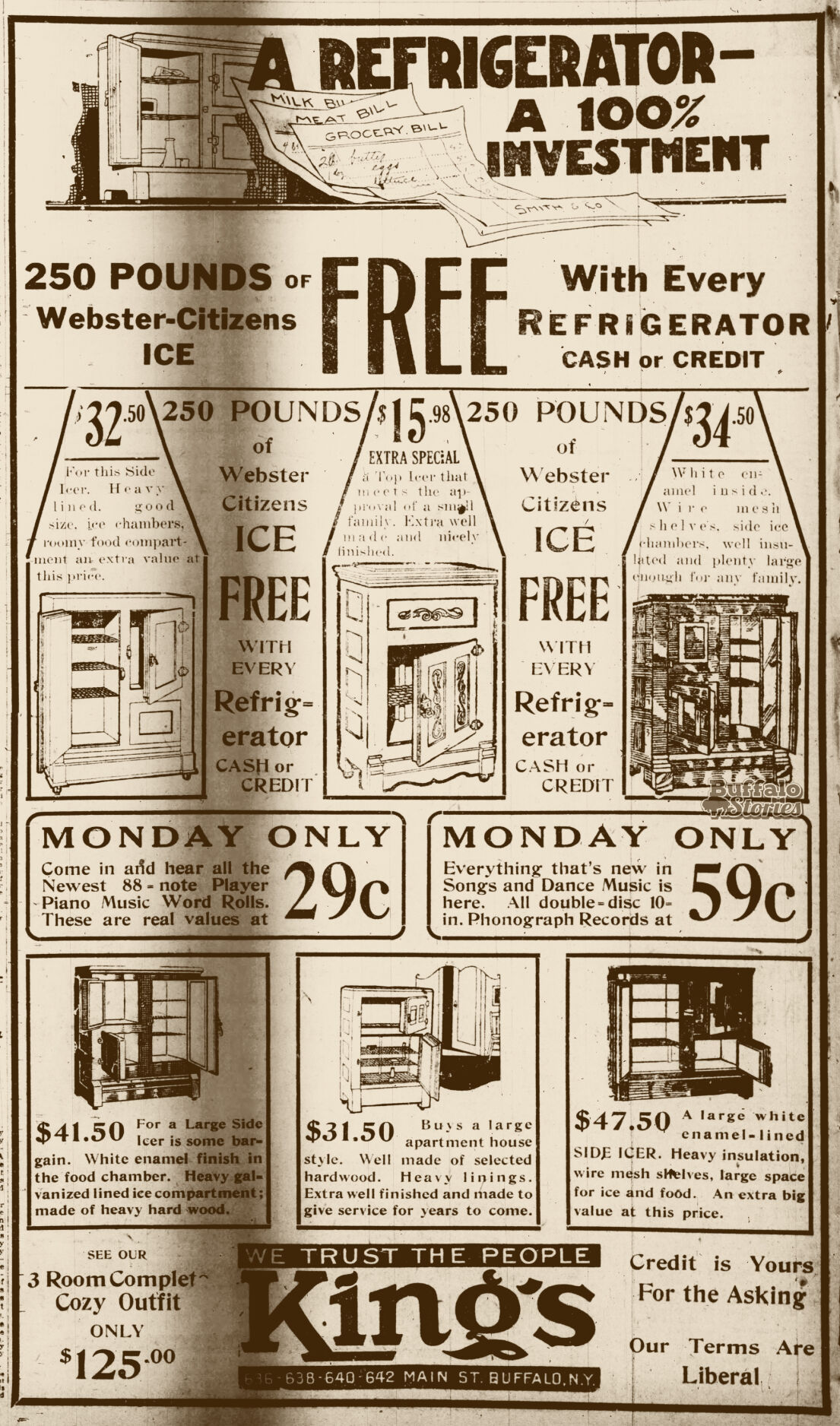 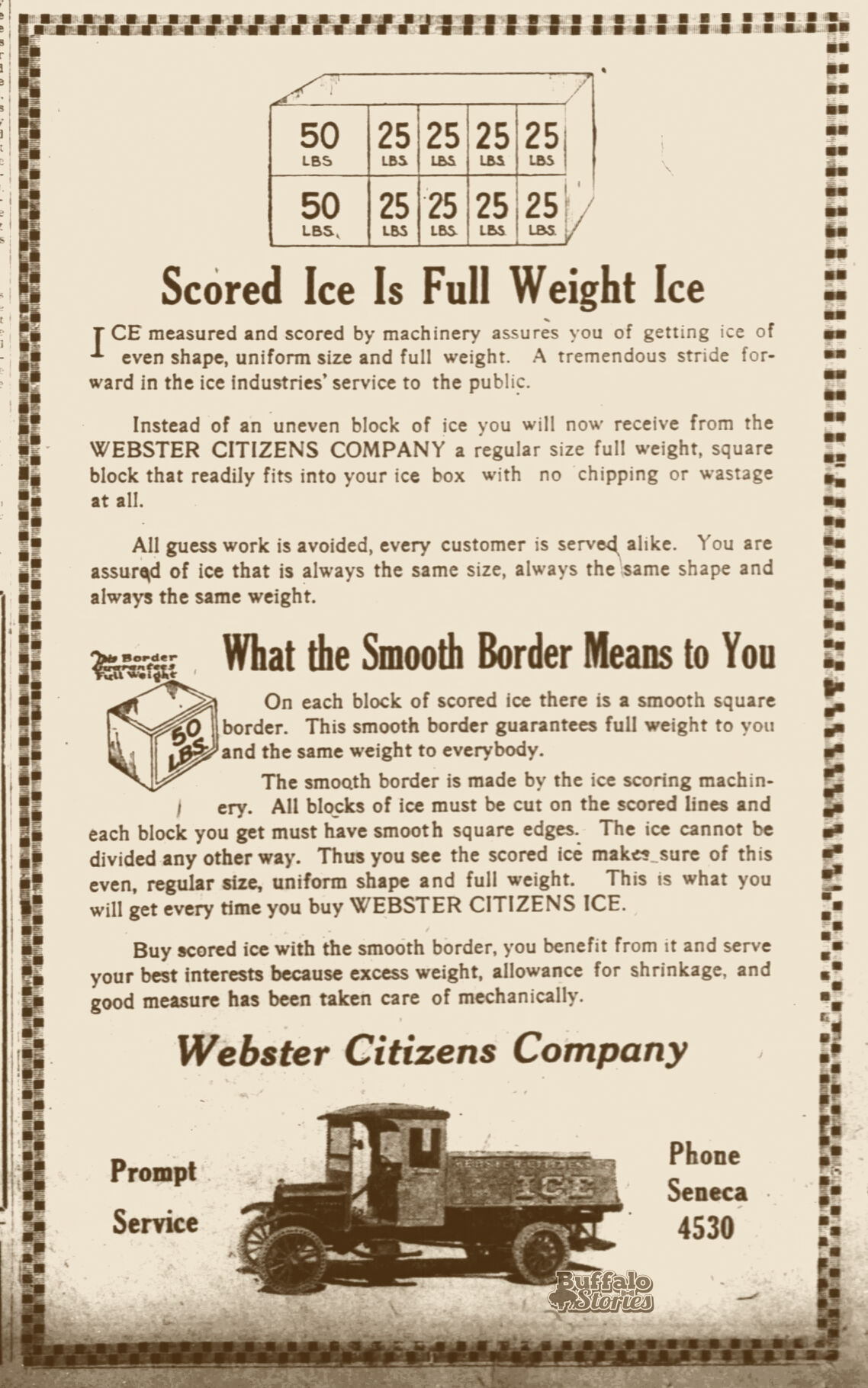