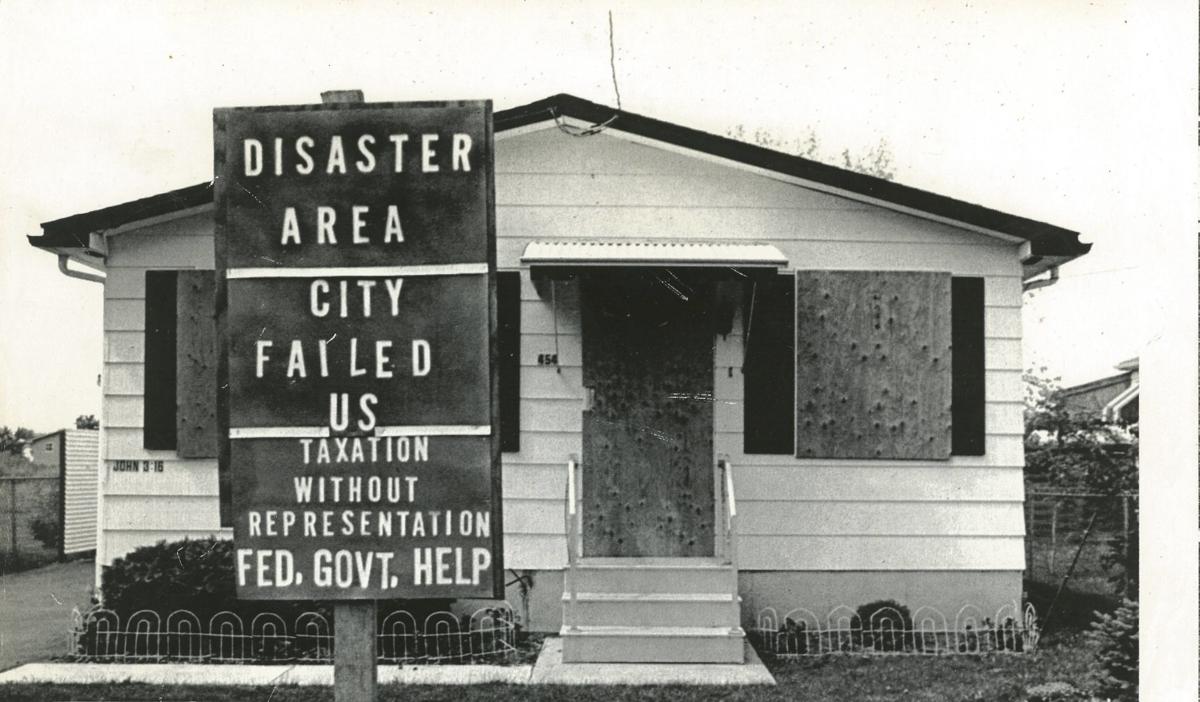 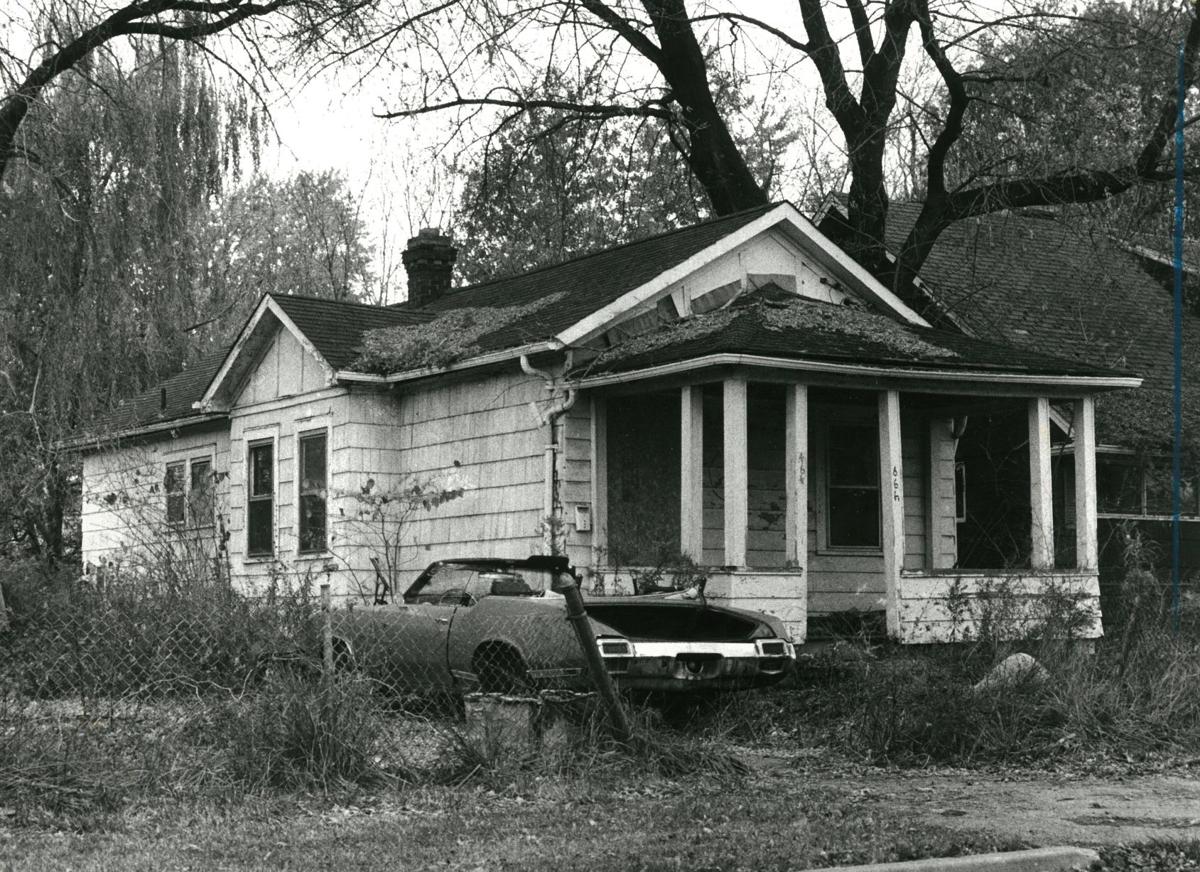 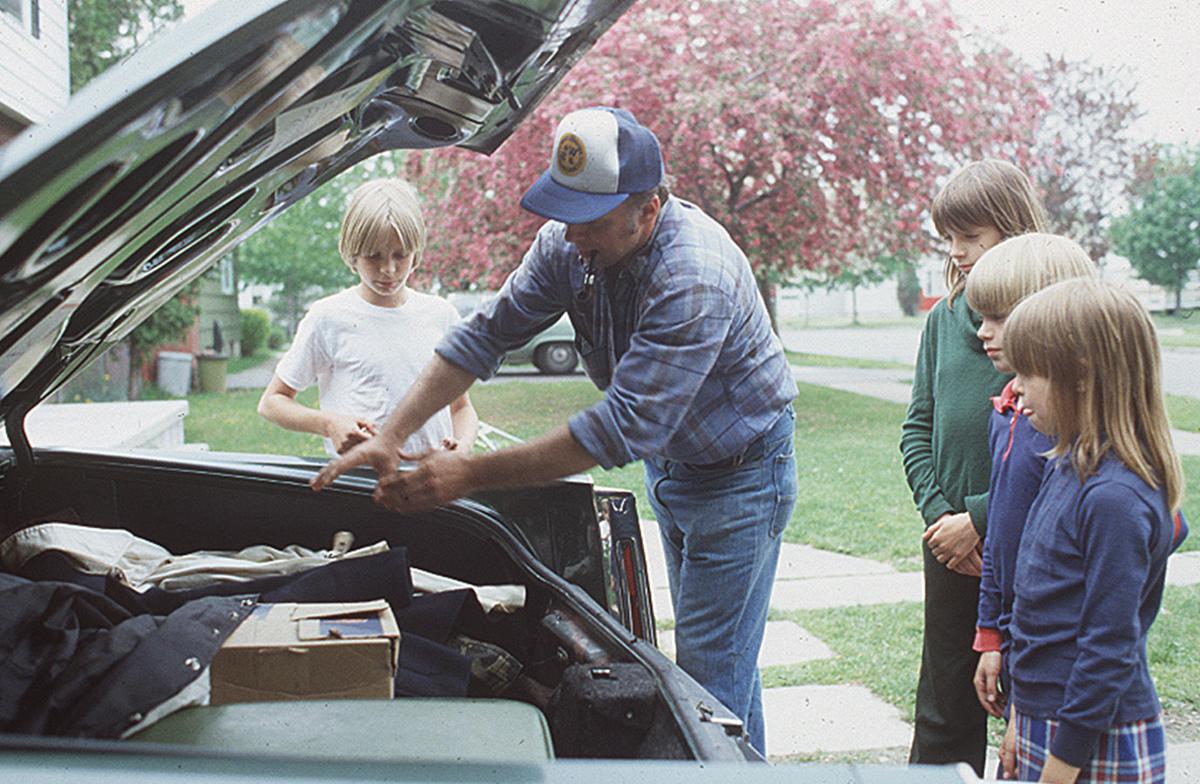 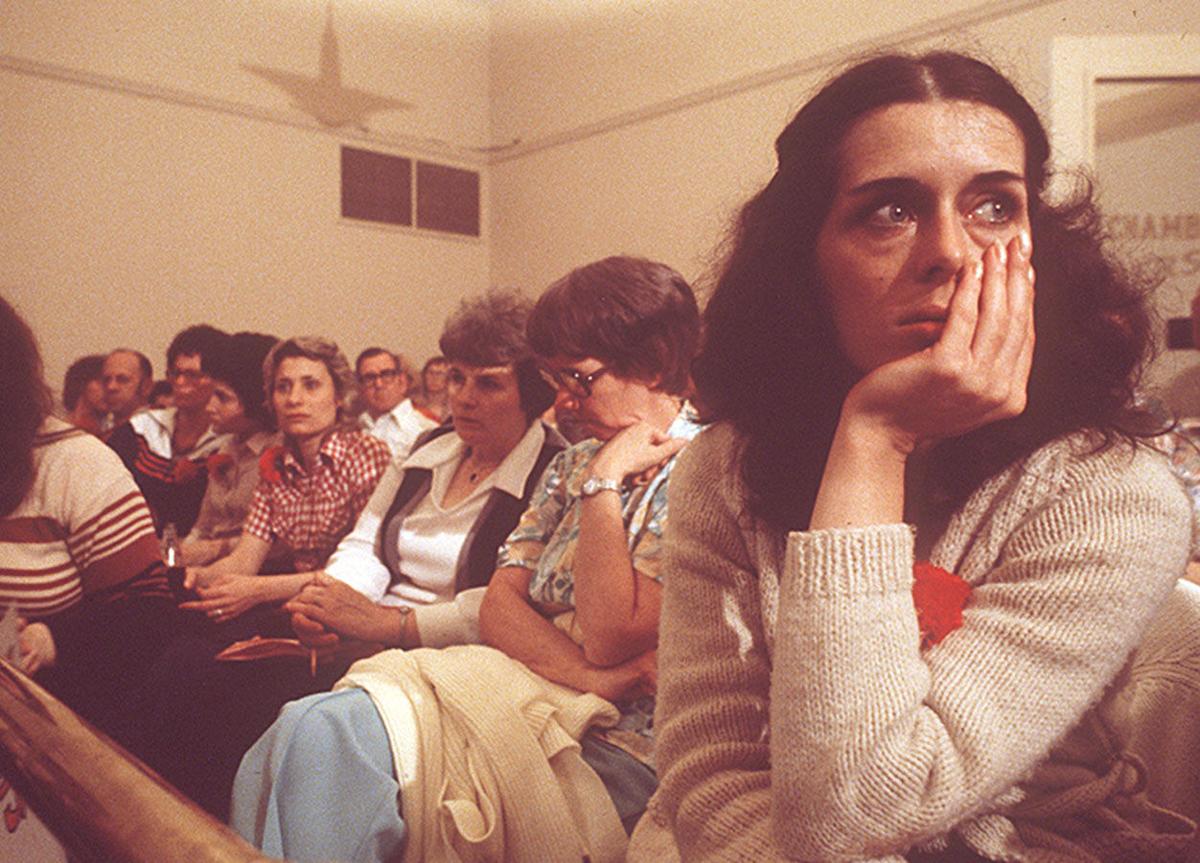 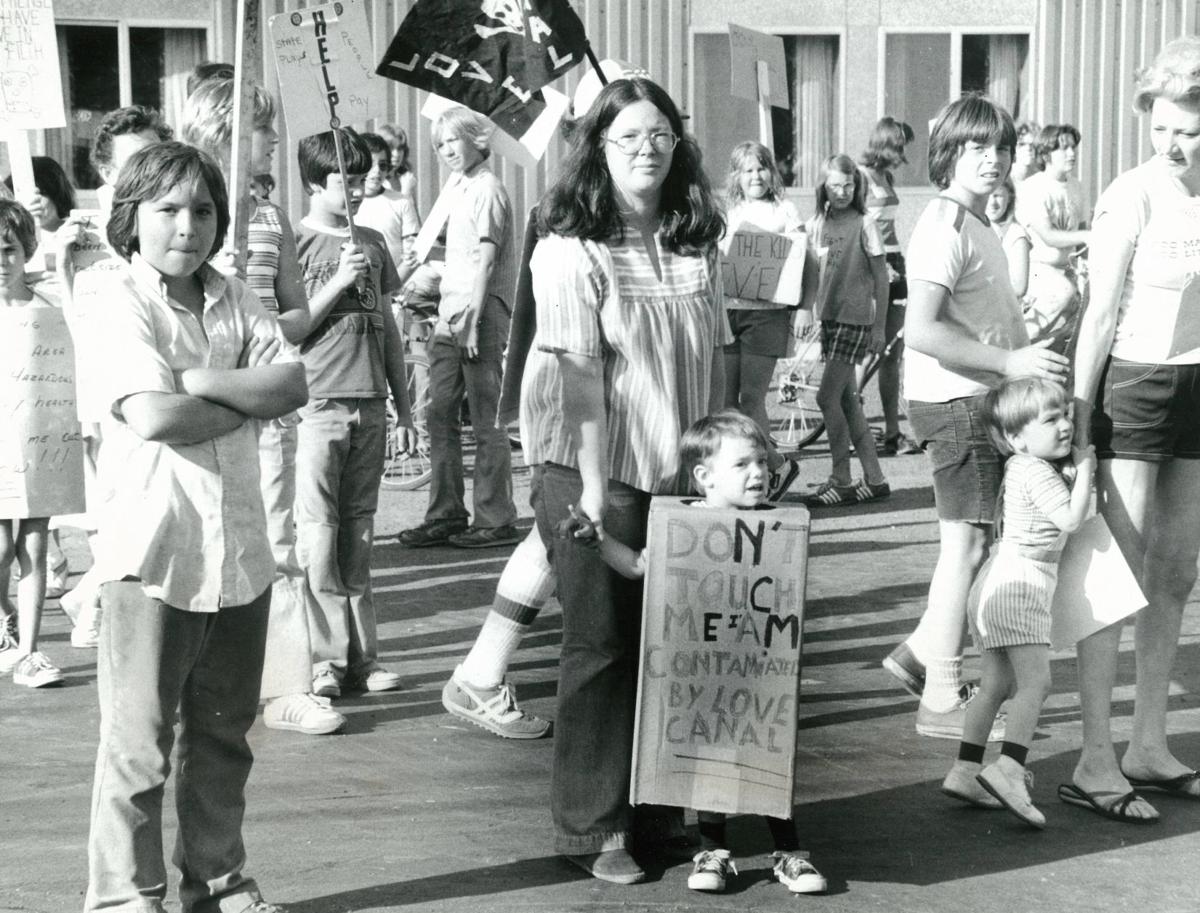 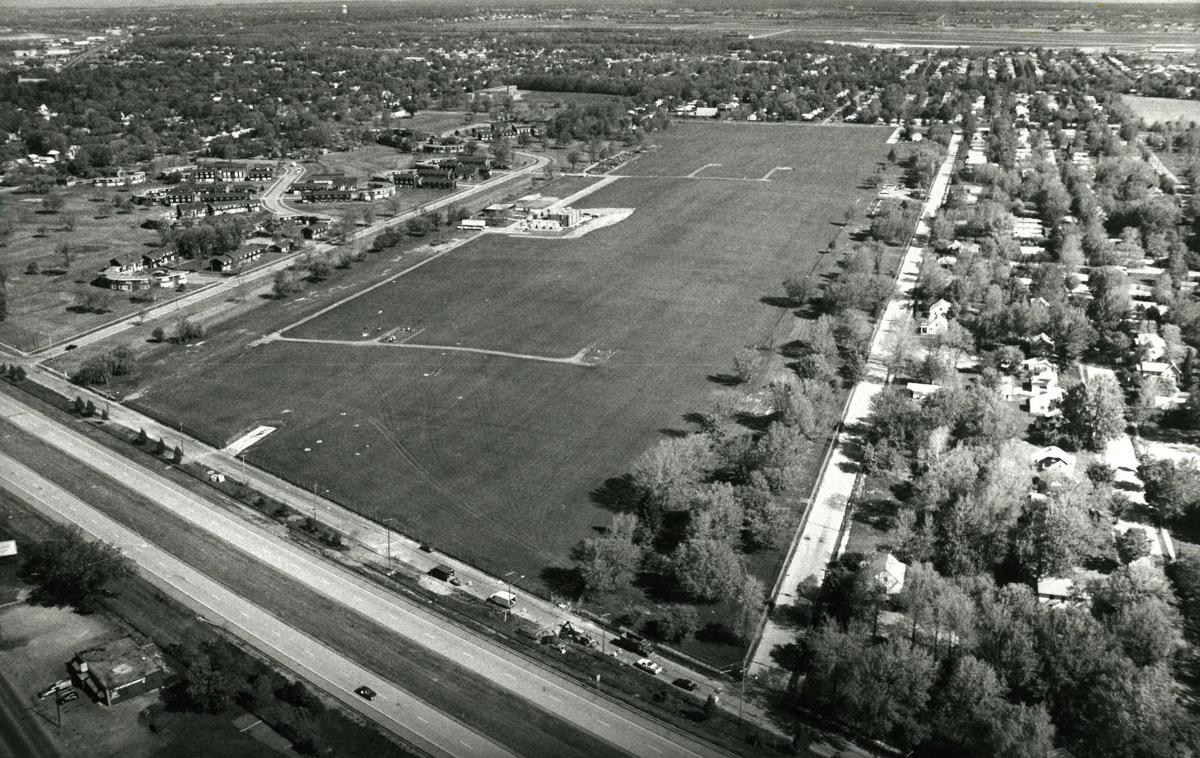 A 1987 aerial view of Love Canal shows the task the U.S. Environmental Protection Agency had set out for itself for a dioxin cleanup that would cost between $26 and $31 million. 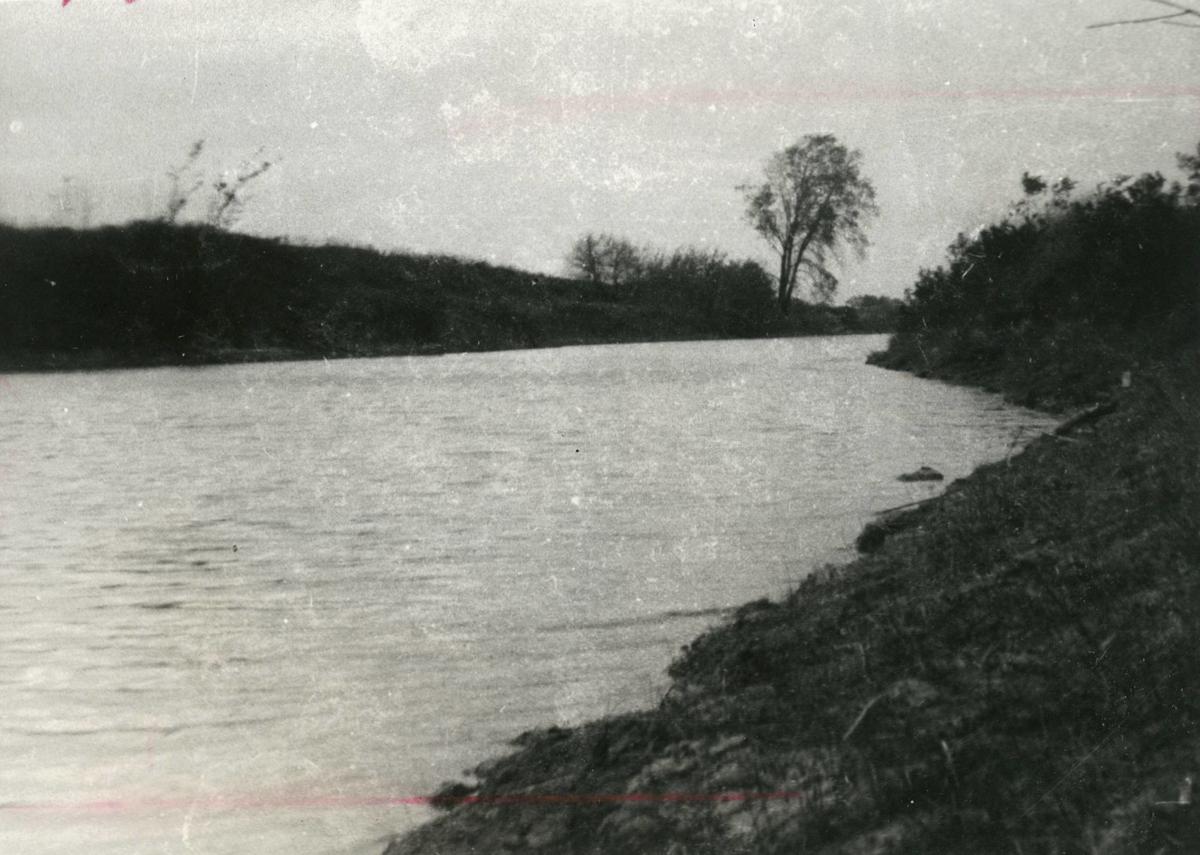 This circa-1940 photo shows Love Canal before it was contaminated. The canal was built by William T. Love in 1834 as a failed attempt to connect the Upper and Lower Niagara Rivers.

The state health department declared an emergency at the Love Canal in 1978, but the history of the dump site stretches back to the last century. Here's a chronology of the site's history and the unfolding environmental disaster:

May 23, 1834: William T. Love starts digging a canal designed to link the upper and lower Niagara River, bypassing the Falls. The water flow down the escarpment, in Love's scheme, would power the industry of a new "Model City" — but the invention of alternating current and practical power transmission torpedoes the scheme and financial backing disappears by 1836, with only 3,200 feet of canal excavated.

1910-1920s: After several other attempts at canal-digging, the project is totally abandoned and the Love Canal becomes a neighborhood swimming hole.

1920s-1930s: Use as a dump site for municipal and industrial waste begins, with most of the early dumping consisting of relatively harmless materials.

1942-1953: An "organic chemical revolution" in herbicides and pesticides provides impetus for the riverside chemical industries, and production of toxic chemicals on a large scale begins. Some of the by-products of these chemicals are themselves toxic, and tons of residues are sealed in metal drums and buried at the Love Canal and other sites.

1951: Housing development begins in areas adjacent to the Love Canal.

1953: Despite initial reluctance and after a threat of property condemnation, Hooker Chemical and Plastics Corp. deeds the Love Canal to the Niagara Falls Board of Education for $1, so an elementary school can be built to serve the growing residential neighborhood.

1958: The City of Niagara Falls builds roads and buries utility lines through the canal site.

1960: The Board of Education gives the city 6.6 acres, the northern third of the Love Canal, for construction of a park. The city eventually builds a baseball field on the site.

1962: The Board of Education sells 6 acres, the southern third of the Love Canal, to Ralph Capone of Niagara Falls for development. Title eventually passes to L.C. Armstrong of Kane, Pa.

1970: Public awareness of pollution and the long-term effects of waste chemicals on the Niagara Frontier begins, with discovery of mercury poisoning in Lake Ontario fish.

1970-1976: Nine complaints about health problems at the Love Canal are logged by the Niagara County Health Department, which orders soil dumped "to cover pooled liquid and exposed drums." In 1972, 101st Street near the canal gains a new resident — Lois Gibbs, 20, who with her husband Harry will begin to raise two children in the neighborhood, and who will emerge as a protest leader and national environmental activist.

1976: The impact of toxins on the environment is a continuing issue with a series of villains — phosphates tied to the "death" of Lake Erie, vinyl chloride fumes and Red Dye #2 tied to health concerns, and Mirex poisoning of Lake Ontario gulls and bottom sediments. In northern Italy, a cloud of emitted chemicals including dioxin contaminates the entire thousand-acre valley of Seveso. Love Canal's early warning signs are obscured by other local environmental issues — Mirex, the abandonment of radioactive materials in West Valley, debate over locating a chemical waste processing plant in Porter.

Summer, 1976: After three years of unusually heavy rains, chemicals begin to ooze into backyards and basements in homes around the Love Canal.

Autumn, 1976: Concerns about problems at the Love Canal voiced by Niagara County health officials and regional administrators of the state Department of Environmental Conservation. Early fears center on benzene and toluene, possible links to leukemia and other diseases. Testing is done by the county health department, state DEC and federal Environmental Protection Agency.

1977: Local DEC officials recommend to Albany that the state take legal action against Hooker over the Love Canal.

Winter, 1977-78: Local DEC officials begin sending urgent messages to Albany, warning that Love Canal could be more serious than anything so far faced by the state or federal government.

May, 1978: Increasingly desperate for health information, Love Canal residents meet with state officials to learn about the threats posed by toxic chemicals in the dump.

July, 1978: Health Department study shows 81 chemicals, including benzene, present at the site. Air sampling continues from July through November. State politicians and officials meet in July to discuss Love Canal problems, and on July 31 a fly-in scientific conference brings experts to LaGuardia Airport in New York to review the situation.

Aug. 2. 1978: Dr. Robert Whalen, state health commissioner, declares a state of emergency at the Love Canal. The 99th Street School is ordered closed, and the commissioner recommends relocation of pregnant women and children under 2 from the first two rings of houses nearest the canal. The announcement triggers an emotional meeting at the 99th Street School, with more than 200 residents chanting "We Want Out!" The first residents out are Robert and Janice Huryn and their two sons, age 3 years and 3 months, who left their house on 97th Street — where white chemical suds were oozing into the basement — to stay with relatives.

Aug. 1978: New York Gov. Hugh L. Carey visits the Love Canal neighborhood and temporarily defuses a tension-filled confrontation by deciding to evacuate all 239 families living next to the canal on both sides of 97th and 99th Streets.

August, 1978: Dr. Beverly Paigen, a researcher at Roswell Park Memorial Institute who had been the first to call for Love Canal evacuation, takes soil samples at the Love Canal and finds chemical contamination.

Oct. 1 1978: State begins construction of a chemical drainage system at the Love Canal, despite "evacuation before excavation" protests from homeowners who want all residents relocated before the earth at the contaminated site is disturbed. Work centers on the southern third of the canal, and begins with a safety briefing – the first spade of contaminated soil is not turned until Oct. 17.

Dec. 10, 1978: State soil sampling continues. Traces of dioxin found on the canal side of 97th Street.

Feb. 20, 1979: Dr. Paigen, later to relocate to California after charging that she was shut out of research grants because of her whistle-blowing at the Love Canal, disputes findings of the Feb. 8 state report.

Oct. 26, 1979: Gov. Carey announces decision to buy more homes, for evacuation of 561 families in a 10-block area around the landfill.

Dec. 18, 1979: Mrs. Gibbs says only 2 of 8 children born to residents of Love Canal area in the previous year were normal.

April 28, 1 980: New York sues Hooker and two affiliated firms for $635 million, for the dumping of chemical wastes into the Love Canal.

May 17, 1980: Environmental Protection Agency releases study indicating chromosome damage to some Love Canal residents. Homeowners react strongly to the news, again demanding immediate and total evacuation. Study comes under immediate attack by some scientists who believe it was flawed and incomplete, and eventually is refuted.

May 20, 1980: EPA says blood tests are "not alarming." Mrs. Gibbs is ejected three times from a Niagara County Legislature meeting, where residents are protesting legislators' refusal to join the regional Love Canal Authority.

May 22, (21) 1980: President Carter declares a second federal emergency at the Love Canal, clearing the way for federal aid to relocate 728 families in a 50 square-block area around the dump. Victory celebrations held at the Love Canal Homeowners Association.

June 5, 1980: Euphoria turns to bitterness as the federal government announces it can only offer low-interest loans, not buy the canal-area homes outright. Both Gov. Carey and Mrs. Gibbs criticize the federal decision.

Oct. 2 1980: President Carter signs a $20 million state-federal aid package for Love Canal family relocations. State and federal governments have agreed to buy another 550 homes, and all but 76 homeowners agree to sell. Total cost is $24.8 million.

Feb. 1, 1981: State Assembly Task Force on Hazardous Substances charges that the Army dumped wastes in the Love Canal in the 1940s, but Army denies the charge on Feb. 20 and replies that the state provided no new evidence not reviewed in earlier study that found no such dumping.

June 17 1982: Demolition of first of 227 houses closest to the canal. Delores Frain, whose husband died two weeks earlier and who raised seven children during her 23 years in the neighborhood, watches tearfully as her home at 99th and Frontier is leveled in five minutes by a bulldozer.

July 8, 1982: EPA tells state it's still unable to determine whether houses beyond the first two rings will be habitable again.

July 12, 1982: State announces high dioxin levels at the canal. EPA soon confirms that the chemical is present in concentrations 100,000 times that found toxic to laboratory animals.

December 1982: Second remedial work project, costing $4 million, begins. Calls for permanent closing of the school, cleaning of the sewers, and a concrete retaining wall around the site.

April 30, 1983: Study by Dr. Paigen indicates children born or raised near the Love Canal are smaller, tend to develop more slowly and have more health problems than other kids.

July, 1983: Plans for concrete retaining wall at the site are scrapped, due to indications areas outside the planned wall are contaminated.

1983: Occidental Chemical, which has bought Hooker, offers a $20 million lump sum settlement to 1ß36 Love Canal residents – about 95 percent of the more than 1,400 residents who have sued the chemical company. The settlement, accepted by the residents in 1984, settles $15 billion in claims and $1 million is set aside as a lifetime medical trust. Average settlement is $14,250.

Oct. 4, 1986: Home of Lois Gibbs, who is now living near Washington, D.C., is demolished in an unexpected round of Saturday-morning bulldozing on 101st Street.

Summer, 1988: Fenced-off toxic dump remains in the middle of the Love Canal site. There are still 84 people living in and around the Love Canal; controversy continues over possible razing of the 304-unit LaSalle projects. The Love Canal Revitalization Agency still owns 400 residential properties in the area, and a resettlement decision involving 13 neighborhoods within the Love Canal area is expected from the state health department by late summer or fall.

1997: Occidental settles lawsuit against the last of the 49 insurance carriers over expenses incurred during the cleanup.

Love Canal today: 'We know what's in our backyard'

A 1987 aerial view of Love Canal shows the task the U.S. Environmental Protection Agency had set out for itself for a dioxin cleanup that would cost between $26 and $31 million.

This circa-1940 photo shows Love Canal before it was contaminated. The canal was built by William T. Love in 1834 as a failed attempt to connect the Upper and Lower Niagara Rivers.