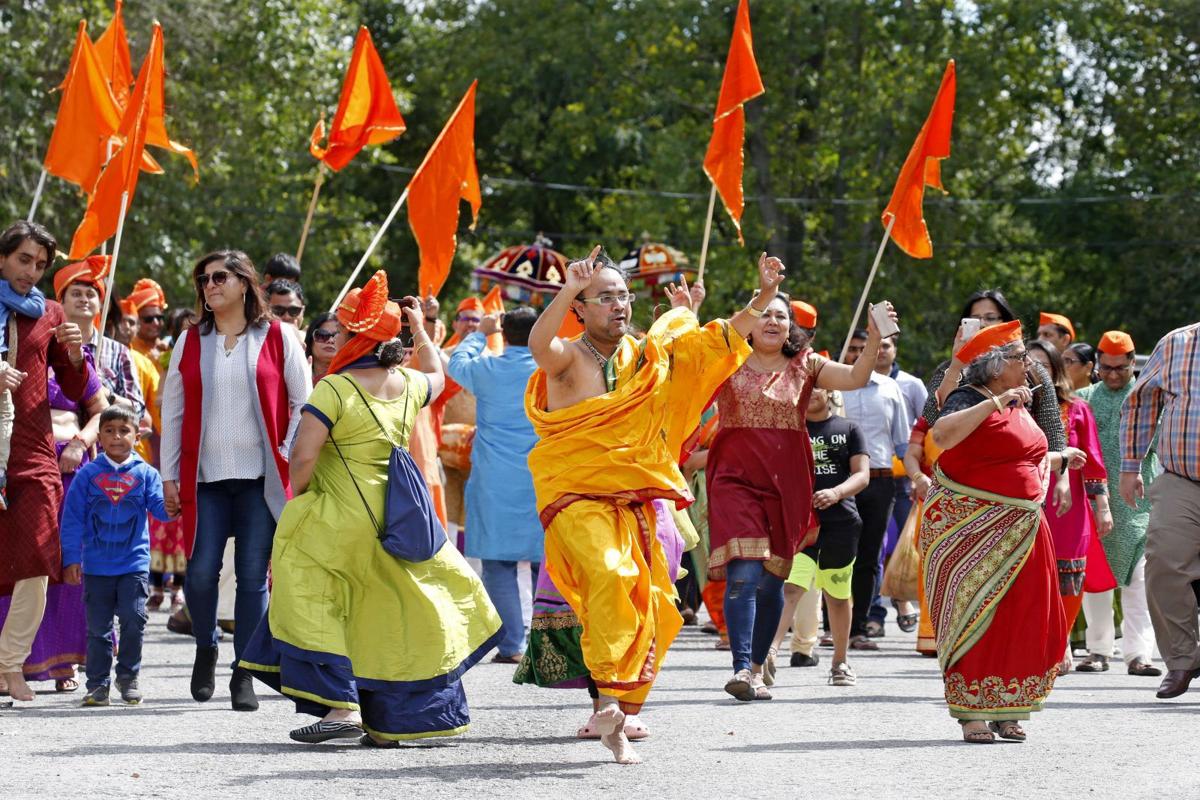 As part of their Ganesh Festival, the Hindu Cultural Society had a procession to the water Sunday for an "immersion ceremony" at Amherst Veterans Canal Park in Amherst. (Robert Kirkham/Buffalo News) 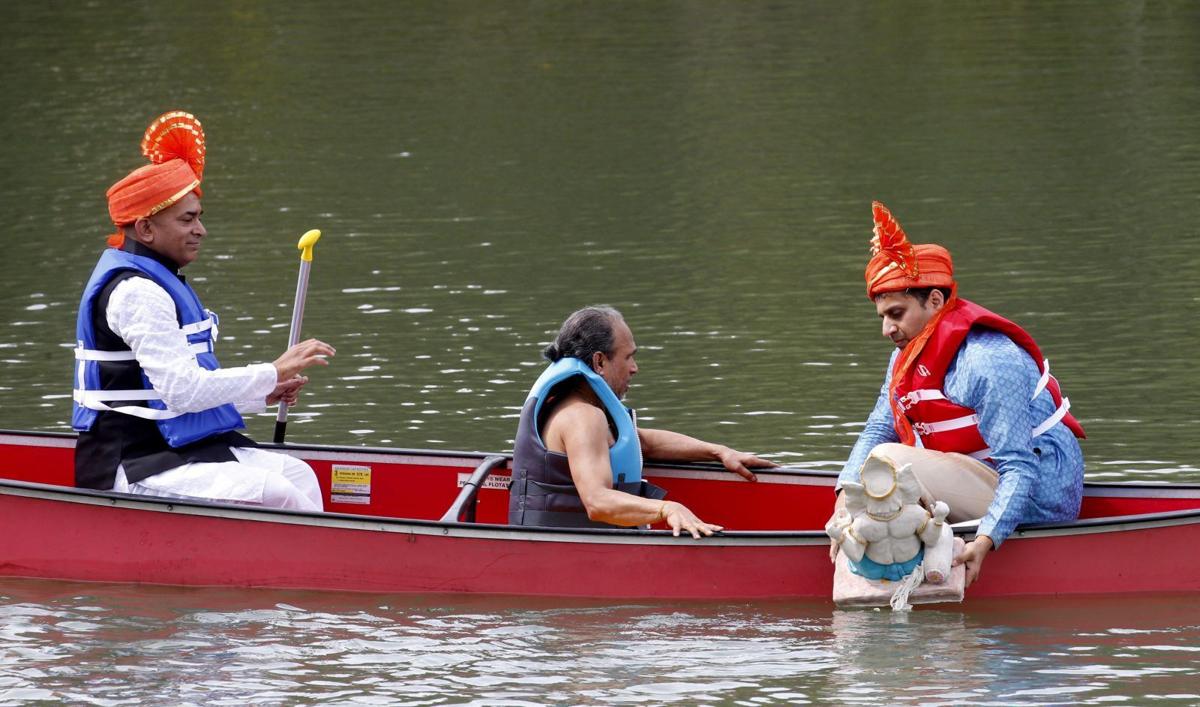 From left, Mohan Natarajan, Temple priest O.V. Ranganathan and Aditya Vaze. As part of their Ganesh Festival, the Hindu Cultural Society's "immersion ceremony" was held at Amherst Veterans Canal Park in Amherst on Sunday, Sept. 8, 2019, where they prayed to one of their gods, Lord Ganesha, and paddled out into the canal there and sent a clay figure overboard. (Robert Kirkham/Buffalo News)

Lord Ganesha, the elephant-headed Hindu deity, is invoked for beginnings, such as a new house or business or the start of any project.

So his presence was doubly appropriate at the first of what will be an annual Ganesh Festival Sunday, presented by the Hindu Cultural Society on North French Road in Getzville in partnership with Buffalo Marathi Mitra Parivar, a community of people with roots in western India.

At the ceremony, hundreds of people of all ages gathered at the Hindu Cultural Center before going in a caravan to the usually quiet boat launch at Amherst Veterans Canal Park.

There, more than 100 people, keeping time with silver cymbals and drums, danced and chanted prayers before a small, intricately molded natural clay idol of Lord Ganesha.

Finally, the idol was taken out in a canoe and dropped in the flowing waters of the creek by Hindu priest O. V. Ranganathan. There it will melt and return to nature.

"The immersion is a way for us to recognize that the Lord is all-pervasive," said Mohan Natarajan, religious secretary of the Hindu Temple. "He is in nature, he is in the heavens, and immersing is basically sending him off, all around, so he is around everyone. Water vapor goes up, comes down and gives us the ocean of grace."

Having the ceremony in public was important, said Bindukumar Nair and Sibu Nair, president and vice president of the Hindu Cultural Society of Western New York, in a statement. "More than the religious aspects, we brought this festival outside the Hindu temple in order to bring the various communities together, and we are optimistic that the festival will grow year after year."

Welcoming the community was a vital part of the ceremony, said Natarajan. "The tenets of the Hindu faith are based on 'All rivers meet the sea, all seas go into the ocean.' Everybody connects with God."

The festival, with the immersion of the idol, is a familiar sight in many Hindu communities, said Hitkiran Saini, who attended with her husband, Saurav Saini, and their daughter Devina, 2½.

"This is one of the biggest festivals across India," said Hitkiran Saini. The Sainis approved of the eco-friendly nature of the immersion of a natural clay idol, not only because of environmental concerns, but because Lord Ganesha's mother, Parvati, is both the power behind her husband Shiva and the daughter of Mother Nature.

The day's events drew several newcomers. Amherst Town Clerk Jeffrey Zeplowitz, whose office was heavily involved in the necessary permits for the event, joined in the vegetarian community lunch and toured the temple for the first time.

At the park, some people who passed by on bicycles or arrived to launch their kayaks watched as the singing, chanting, dancing and drumming crowd escorted the idol to the water and then to the canoe.

Among the onlookers were friends Mike Wood and Brandon Morrisey, who stopped their bike ride to watch the ceremony.

"I like the multiculturalism of it, and I've always found Hinduism sort of fascinating," said Wood.

"It's good to see the park used for other things, and to see the patience of the people who are here with kayaks," said Morrisey. "We were very lucky, very fortunate to have happened upon it," he said.

As part of their Ganesh Festival, the Hindu Cultural Society had a procession to the water Sunday for an "immersion ceremony" at Amherst Veterans Canal Park in Amherst. (Robert Kirkham/Buffalo News)

From left, Mohan Natarajan, Temple priest O.V. Ranganathan and Aditya Vaze. As part of their Ganesh Festival, the Hindu Cultural Society's "immersion ceremony" was held at Amherst Veterans Canal Park in Amherst on Sunday, Sept. 8, 2019, where they prayed to one of their gods, Lord Ganesha, and paddled out into the canal there and sent a clay figure overboard. (Robert Kirkham/Buffalo News)