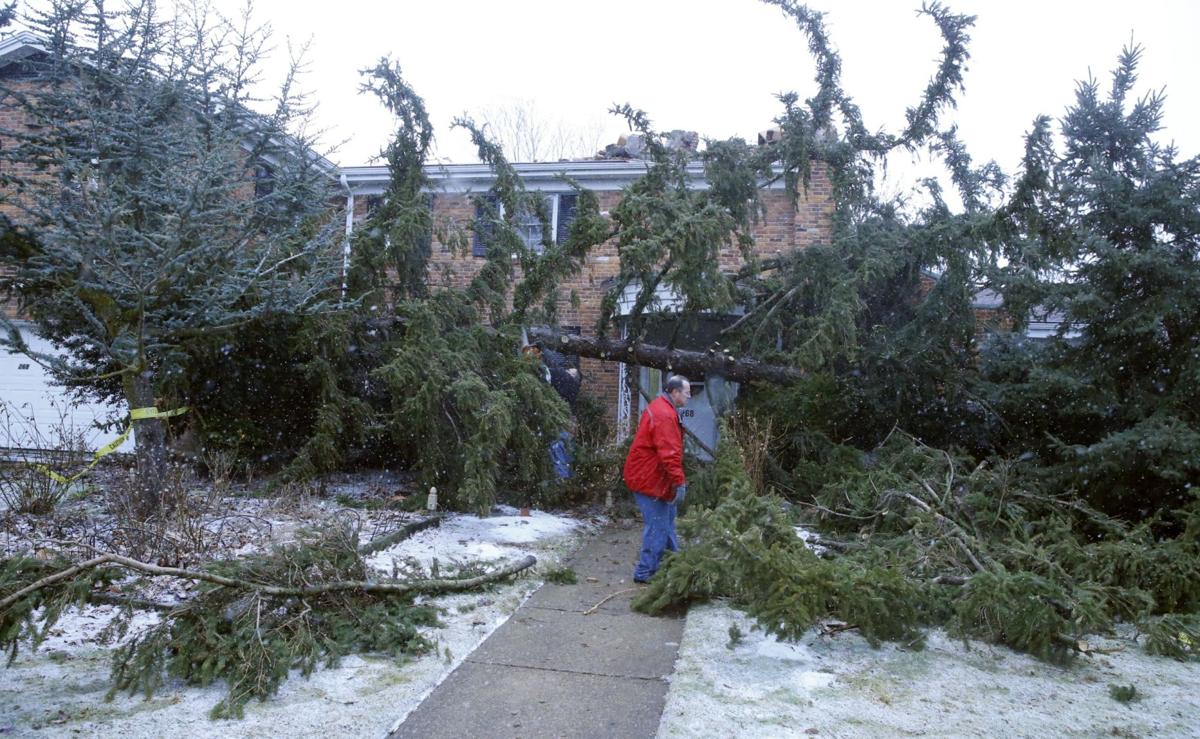 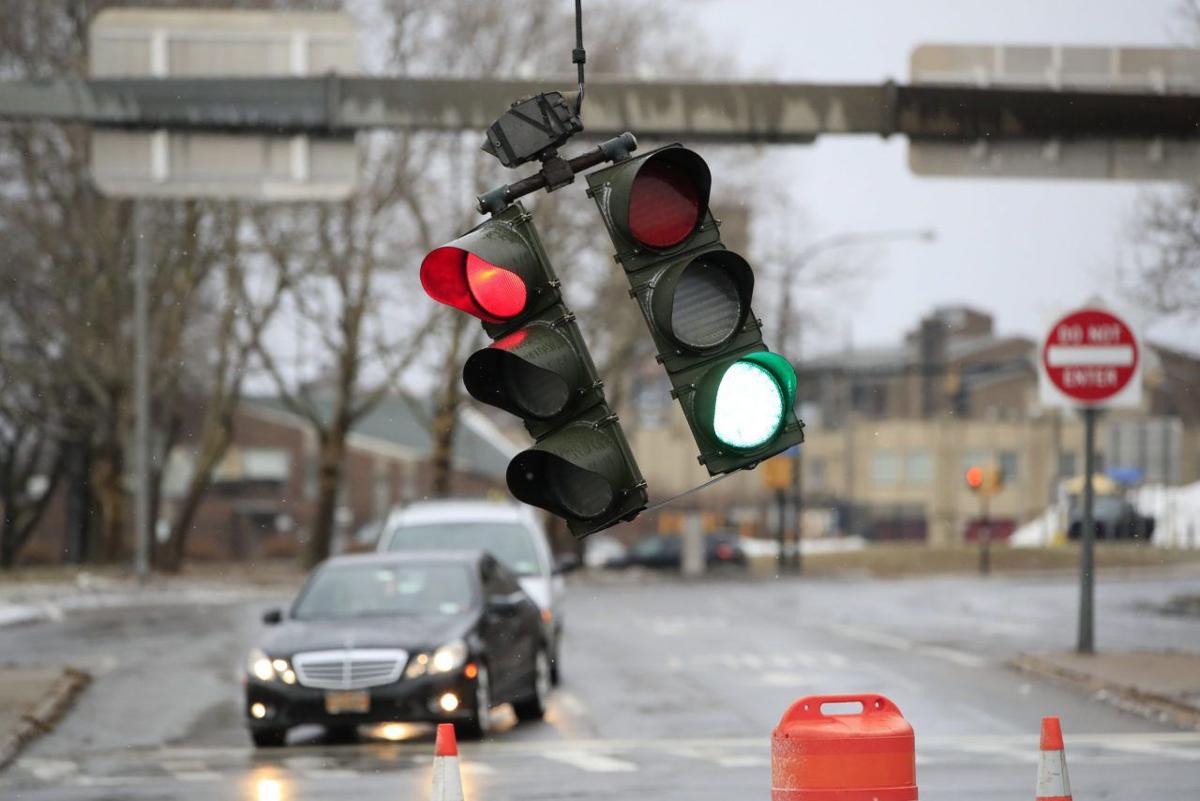 A traffic light hangs on the corner of Lower Terrace and Church Street in Buffalo earlier this winter during a windstorm. (Harry Scull Jr./News file photo) 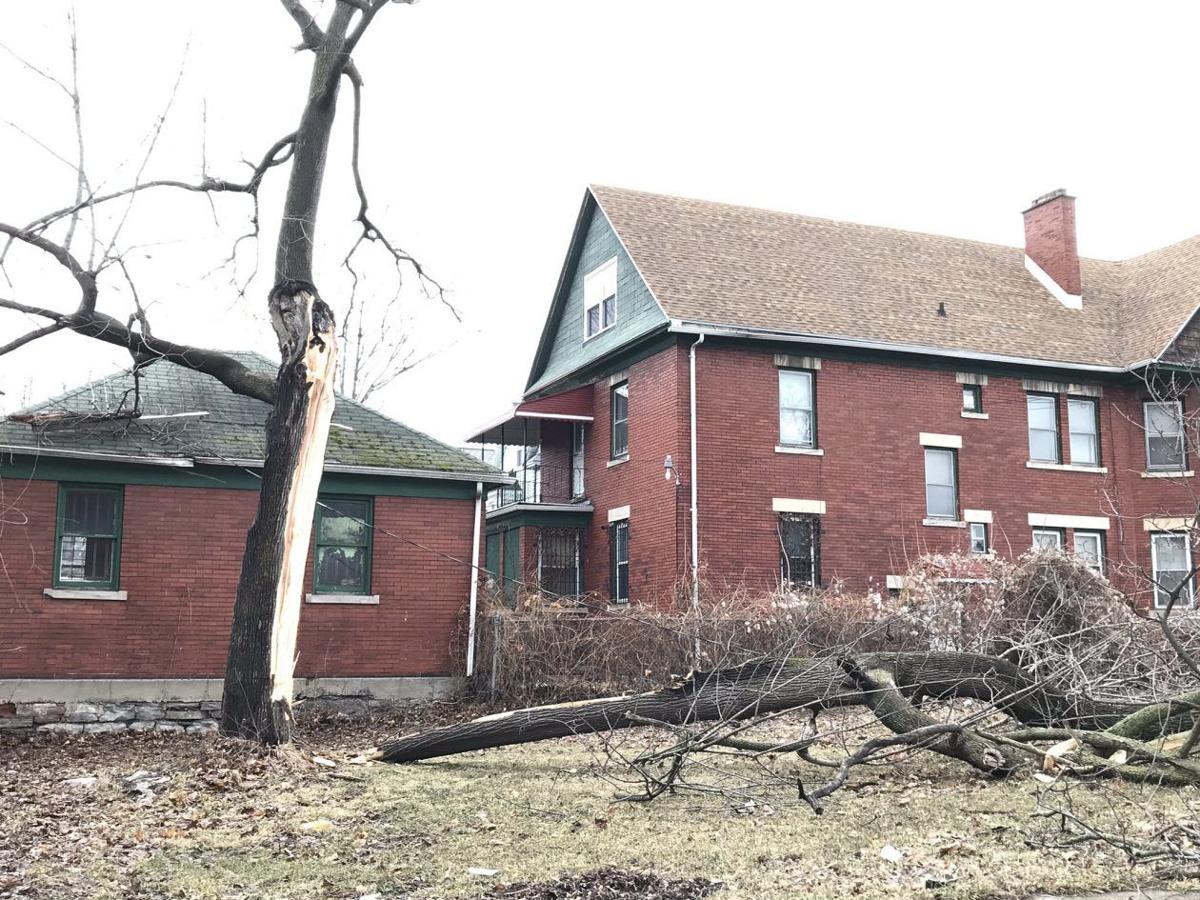 A fallen tree near this house on East Delavan Avenue is one of many across Western New York. Sunday's wind storm prompted at least two area school districts to close Monday. (Robert Kirkham/Buffalo News) 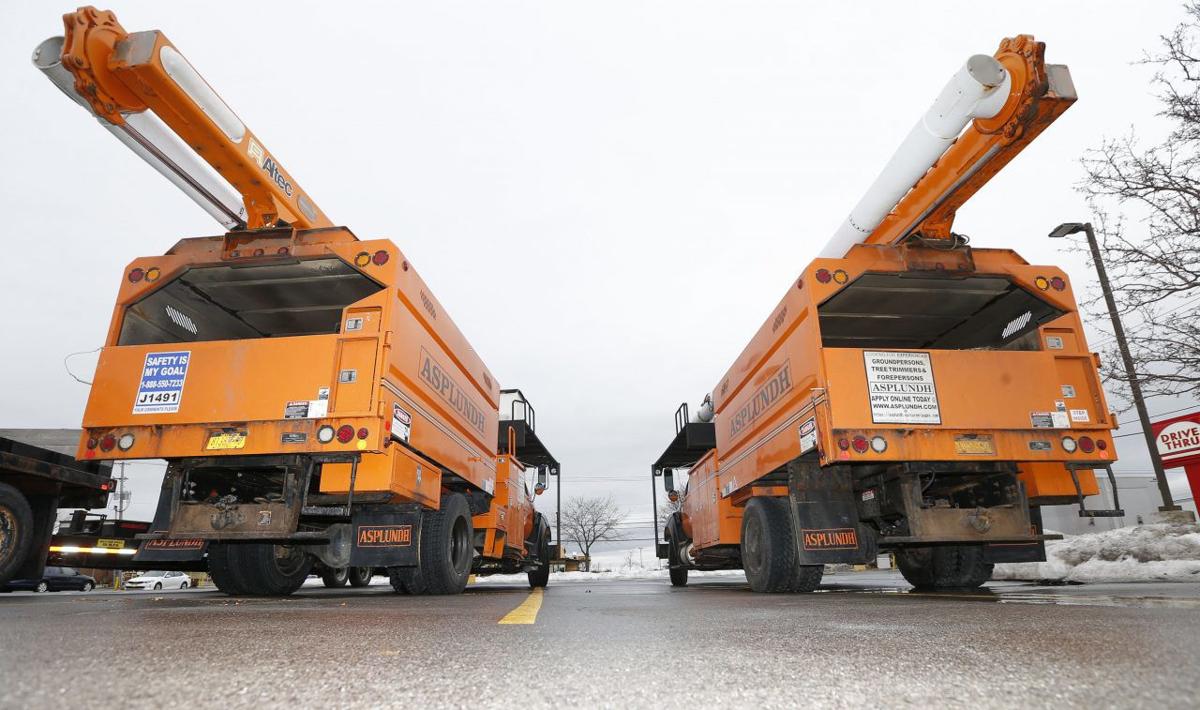 A powerful storm battered the Buffalo area on Sunday with wind gusts over 70 mph, toppling trees and power lines, forcing roads to close and leaving thousands of utility customers in the dark.

The fierce winds are expected to continue into Monday, with snow adding to the hazardous conditions in places.

Many school districts, including Buffalo and Niagara Falls, announced they would be closed on Monday due to the storm.

The storm prompted Erie County Executive Mark Poloncarz to issue a travel advisory at midafternoon Sunday, calling on residents not to travel unless absolutely necessary. The City of Buffalo, Town of Amherst and Niagara County also issued travel advisories. The National Weather Service called the storm "a particularly dangerous situation."

"This is a significant storm," Poloncarz said. "It's going to continue for a number of hours."

The storm's impact took many forms, from malfunctioning traffic lights and fallen wires and power poles to damaged buildings and power failures. Poloncarz reported the ice boom had broken. And the weather service issued a flash flood warning for areas including Tonawanda, North Tonawanda and Grandyle Village, on Grand Island. There were no reports of homes being flooded on Sunday evening.

VIDEO: My collection of video shorts put into one from around our region while on assignment chasing the wind today.

The Power Authority said it had previously staged equipment to prepare for any necessary ice boom repairs and ice-breaking activity.

Poloncarz said ice was flowing down the river and that some of the ice was going over Niagara Falls. He said there were no reported problems with the intakes used by the Power Authority.

44,000 without power in Erie County after windstorm; restoration work not yet begun

As of 7:45 p.m., Niagara Falls International Airport had the area's highest peak wind gust of 74 mph. At the Buffalo Niagara International Airport, the top recorded wind speed was 69 mph, tied with other locations in Buffalo, Batavia and Dunkirk, according to the National Weather Service.

Erie County Central Police Services reported answering 1,500 emergency service calls over a five-hour period on Sunday afternoon. But the center was prepared with additional staff to handle the volume, due to weather forecasts that were on the mark, said commissioner James Jancewicz. On a typical Sunday in February, the center receives about 75 to 80 calls in a given hour.

The Town of Hamburg declared a voluntary evacuation of Hoover Beach because of ice being blown onto the shore.

What to expect the next 36 hours: Flash floods and freezing temps as high winds persist

Emergency responders reported a light pole had fallen at Garfield and Niagara streets, striking a woman, who was reported to be unconscious. No electric wires were exposed. Another woman was injured when a tree branch struck a house on East Delavan Avenue in Buffalo. And there was a report of people temporarily trapped in a Dollar General store on Twin Cities Memorial Highway in North Tonawanda because of downed wires.

Twin City Ambulance lost an antenna from the roof of its building in Amherst. Daniel Neaverth Jr., commissioner of the county's department of homeland security and emergency services, said the county was providing the ambulance service with access to a county channel as an alternative.

Gov. Andrew M. Cuomo activated 250 members of the National Guard to help with debris cleanup, while empty tractor-trailer and tandem trucks were banned from portions of the New York State Thruway, as well as Interstates 190, 290 and 990, U.S. 219, State Route 400 and State Route 5.

The City of Buffalo was opening warming shelters Sunday night to respond to the dropping temperatures, and the city's travel advisory was to stay effect for the foreseeable future, Mayor Byron W. Brown said at a news conference in City Hall. The Skyway and several waterfront parks also remained closed as of Sunday evening.

“This is still a very dangerous storm, and we’re asking people to treat it that way," Brown said, joining city officials to urge people to stay home Sunday night.

Poloncarz said National Grid and NYSEG were responsive during the storm, with representatives of both utilities at the county's emergency operations center on Sunday.

"We have had issues with NYSEG in the past, but they've been very, very responsive and communicative in this storm," Poloncarz said. He noted that Carl Taylor, the utility's president and CEO, came to the operations center on Sunday. State representatives were also on hand, including the Public Service Commission and the state Office of Emergency Management.

But Poloncarz noted that the conditions would hamper utility crews' efforts to restore power, since it would be unsafe for workers to go up in bucket trucks in high winds.

Poloncarz recounted how when he was inside his 16th floor office of the Rath Building earlier Sunday, the building swayed more than usual in high winds. "It was a little disconcerting to be sitting in my chair, and my chair which has wheels on it is rolling."

County officials warned residents to stay inside unless absolutely necessary, due to dangers from flying debris and hazardous driving conditions.

"I would just tell folks this is a serious storm," Poloncarz said. "Hopefully we will get through it with just some trees down, some power lines down and power restored within 48 hours."

A traffic light hangs on the corner of Lower Terrace and Church Street in Buffalo earlier this winter during a windstorm. (Harry Scull Jr./News file photo)

A fallen tree near this house on East Delavan Avenue is one of many across Western New York. Sunday's wind storm prompted at least two area school districts to close Monday. (Robert Kirkham/Buffalo News)