Rep. Brian Higgins has called for the Skyway's removal for years.

So it might seem a little strange that five months after the state Department of Transportation, with the support of Gov. Andrew M. Cuomo, revealed plans to do just that, Higgins now wants the state to consider retaining a portion of the aging, concrete behemoth.

To be sure, Higgins does not want vehicular traffic on the Skyway. But he is concerned about access to the Outer Harbor from downtown, and thinks a proposal by the Campaign for Greater Buffalo History, Architecture & Culture, released today, may be a good place to start.

The proposal calls for keeping most of the superstructure, which stands 110-feet-tall at its highest, for pedestrian and bicycle use and as an observation deck. The Campaign for Greater Buffalo, whose motto is "We Preserve Wonderment," has a new name for the reimagined structure: the Cloudwalk.

"The DOT needs to give serious consideration to this, and to the general issue of access from downtown Buffalo to the Outer Harbor," Higgins said. "If they have a better idea, they should advance it and let it be evaluated."

The group's proposal calls for dismantling the Skyway from Church Street to the DL&W train shed, along with viaducts, ramps and the Niagara Thruway interchange. That would free 12 acres for development where the city's Canal District and Terrace Park, Buffalo's first public park, once stood.

The Skyway would then extend south from there to Buffalo Harbor State Park, with the plan recommending it become an official extension of the park.

Elevator towers to access the Cloudwalk would be at the DL&W, with a planned connecting public plaza and promenade on the second floor, and at the Outer Harbor's Wilkeson Pointe.

The estimated travel time between the two elevator towers, using Erie County's GIS website, the organization said, is less than 6 minutes on foot and about 1 minute by bike.

"It's no frills, simple and can be done for the cost that's already been budgeted for demolishing the Skyway," said Tim Tielman, the group's executive director. "You get a new transportation route for bicyclists and walkers, a tremendous view and expansion of a state park."

Tielman said the Cloudwalk would become a popular attraction and add to the local retail economy.

The proposal bears some resemblance, conceptually, to the winning "City of Lights" entry in the "Aim for the Sky" competition that the governor held in 2019 to reimagine the Skyway. That plan, as well as several other submissions, called for part of the structure to remain for non-vehicular use.

Tielman said the Campaign for Greater Buffalo first came up with its proposal back in 2007. The plan wasn't submitted to the state competition because only licensed architects and landscape architects were eligible.

He said the proposal "restores a transportation imbalance in favor of sustainable bicycling and walking."

"These have been people underserved and disrespected by the transportation industrial complex, which is all about serving the automobile," Tielman said. "It fails to recognize that drivers, the majority of the time, are not driving a car, and might enjoy this wonderful access."

Higgins said he's not endorsing the proposal at this point, and its call to leave 80% of the Skyway in place is a non-starter. Even retaining half that much of the Skyway, Higgins indicated, would be too much.

But his willingness to consider keeping some of the Skyway for non-vehicular purposes is a departure.

Higgins told The Buffalo News Editorial Board the month after the state competition concluded that the Skyway would be demolished.

"Look, the Skyway is coming down," Higgins said at that October 2019 meeting. "Half of it is not going to stay up, or portions of it. It's going to go.

But Higgins said the importance of having access to the Outer Harbor from downtown – which he called Buffalo's fastest growing neighborhood – is critical for Buffalo's development and deserving of further review.

The congressman has long contended that the Skyway, which opened in October 1955, needs to be torn down because it is "structurally deficient, functionally obsolete and fracture critical." It could not be built under current state and federal safety standards, he has said.

The structure's condition, Higgins now says, is something that the Environmental Impact Statement will need to determine. That environmental review is expected to conclude in the coming months, with a Statement of Record issued this summer.

"All of those things would be addressed," Higgins said.

The process to determine what to do with the Skyway has been fast-tracked by Cuomo since he initiated the design contest in February 2019. When the winner was announced that September, he committed $10 million toward the environmental review and 20% of the project's eventual cost.

Last August, the Department of Transportation announced two alternatives to the Skyway, one a lower-speed boulevard with landscaping, and the other a highway. Each would head east from Lake Erie on the existing Tifft Street right-of-way and then head north, past the Tesla plant and across a new bridge over the Buffalo River to a new I-190 on-ramp at Seneca Street.

Either alternative would lead to the complete demolition of the Skyway.

Cuomo, in his State of the State address in January, said a groundbreaking will take place later this year.

This comes as many living in the Southtowns believe taking down the Skyway will increase their commute time to work.

With that concern in mind, Higgins and an aide went to the middle of the Village of Hamburg and figured out with the help of GPS that driving on the Skyway to City Hall was 3 minutes quicker than taking the Niagara Thruway.

That led him to suggest design changes that he believes will provide easier access to the Niagara Thruway and quicker drive times to downtown.

What will 40,000 vehicles do if Skyway is torn down? Public weighs in

Public meetings are being held this week for the public to look at traffic alternatives without the Skyway.

Higgins is calling for a new on-ramp on Lake Avenue in Hamburg, and wants to see a new turn lane on Milestrip Road to benefit commuters from Hamburg, Orchard Park and Evans.

For aesthetic reasons and to improve bicycle access, Higgins also wants to see the boulevard option built at-grade and with a separated linear park, instead of an elevated arterial.

"I think these additions can all be worked out, and I will use my influence to do it," Higgins said.

He has also called for the use of synchronized traffic signals and other advanced traffic-flow technology on East Side and South Buffalo streets to speed up city traffic.

At the same time, Higgins said he wonders if the pandemic and the resulting increase in telecommuting will have a long-term effect on businesses that could mean "traditional rush hour has changed forever."

As a member of the House Ways and Means Committee, Higgins expects to play a leading role in a large infrastructure bill that's anticipated to pass this year. It is from that pot of money that the bulk of funding is expected for the Skyway project.

Whale made of recycled plastic swims over Kyiv

Whale made of recycled plastic swims over Kyiv

Developer Samuel J. Savarino's goal is to determine how to make the historic train shed an integral part of the city's burgeoning waterfront.

Southtowns residents shouldn’t fear long delays driving to downtown without the Skyway, said an urban designer on the team that submitted the winning Skyway competition 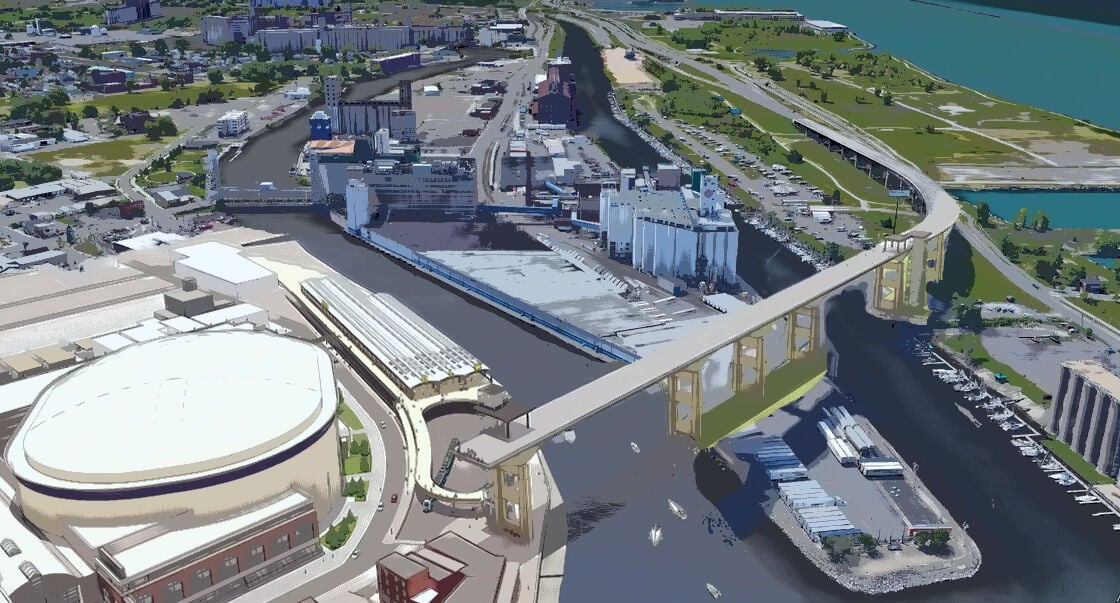 The proposed Cloudwalk would connect the DL&W train shed and downtown with the Outer Harbor. 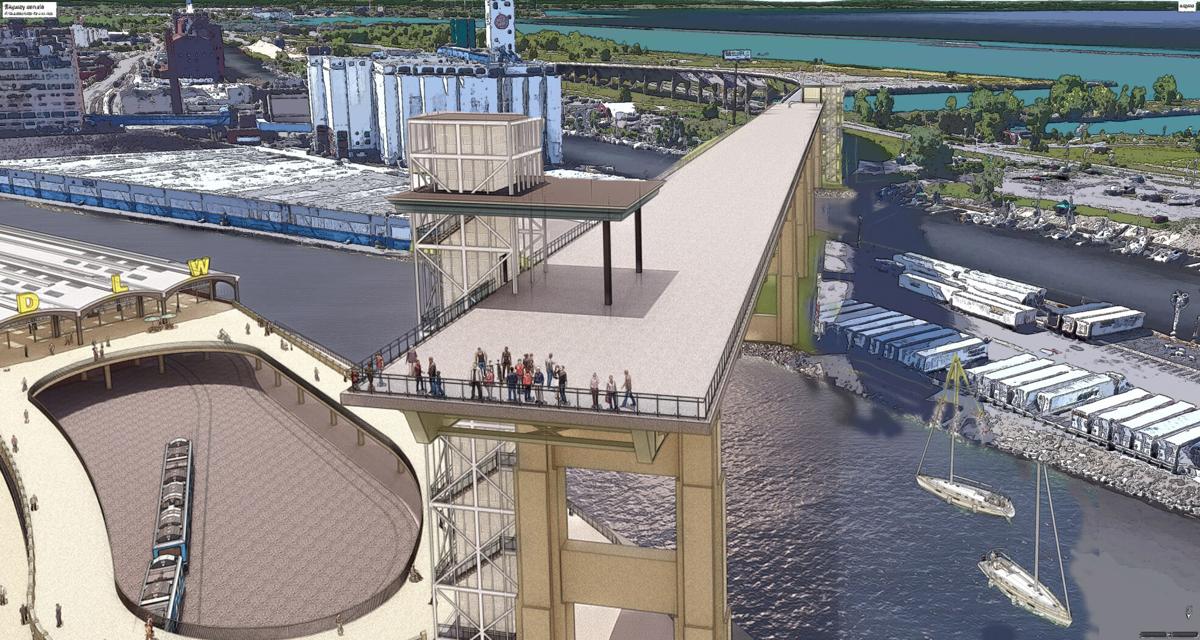 The Cloudwalk would be a transportation link and observation deck, connecting the DL&W and Canalside to the Outer Harbor.