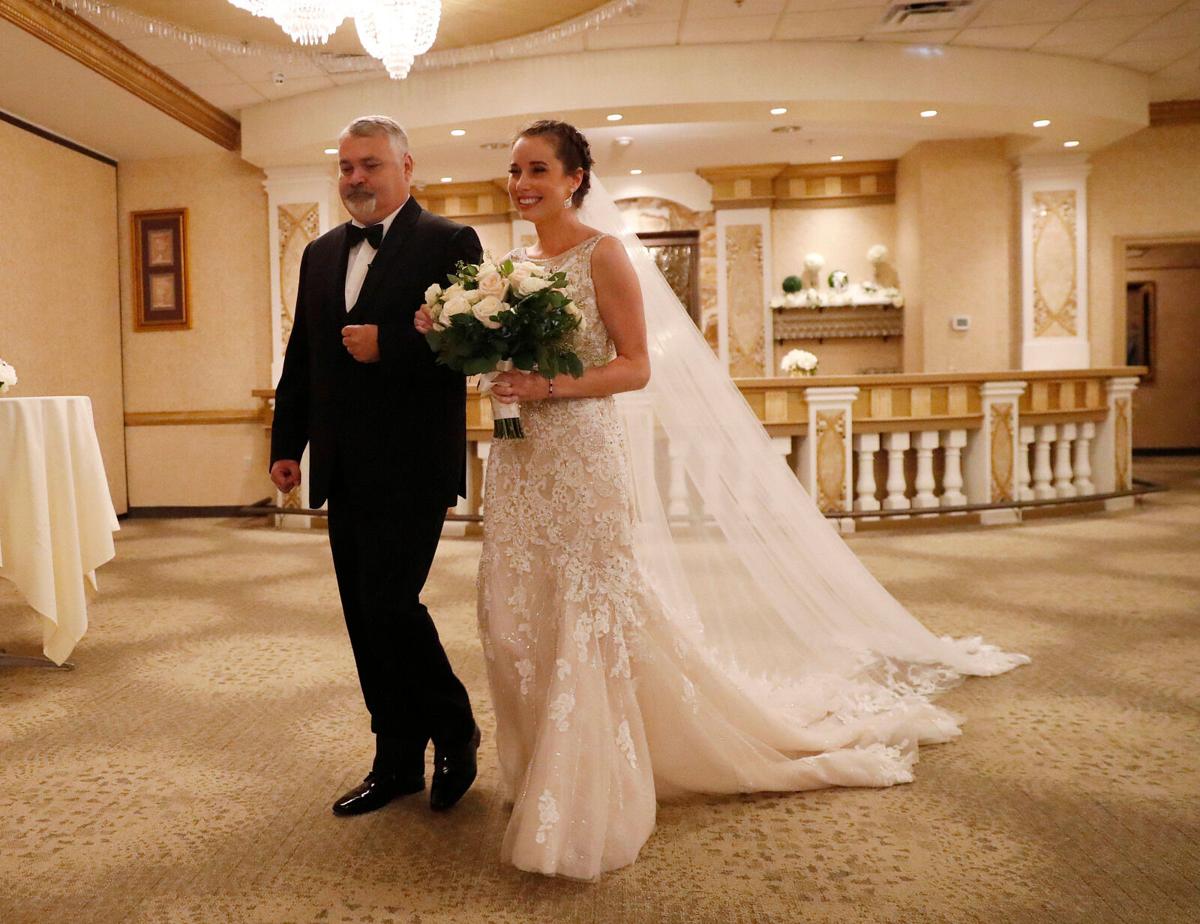 Daniel Donnelly Jr. walks Diana Donnarumma down the aisle at her wedding to Conlan Kreher in Salvatore's Italian Gardens, Friday, Aug. 13, 2021. Donnelly's daughter, Heather, was the organ donor for Donnarumma, who had an intestinal transplant in 2017. 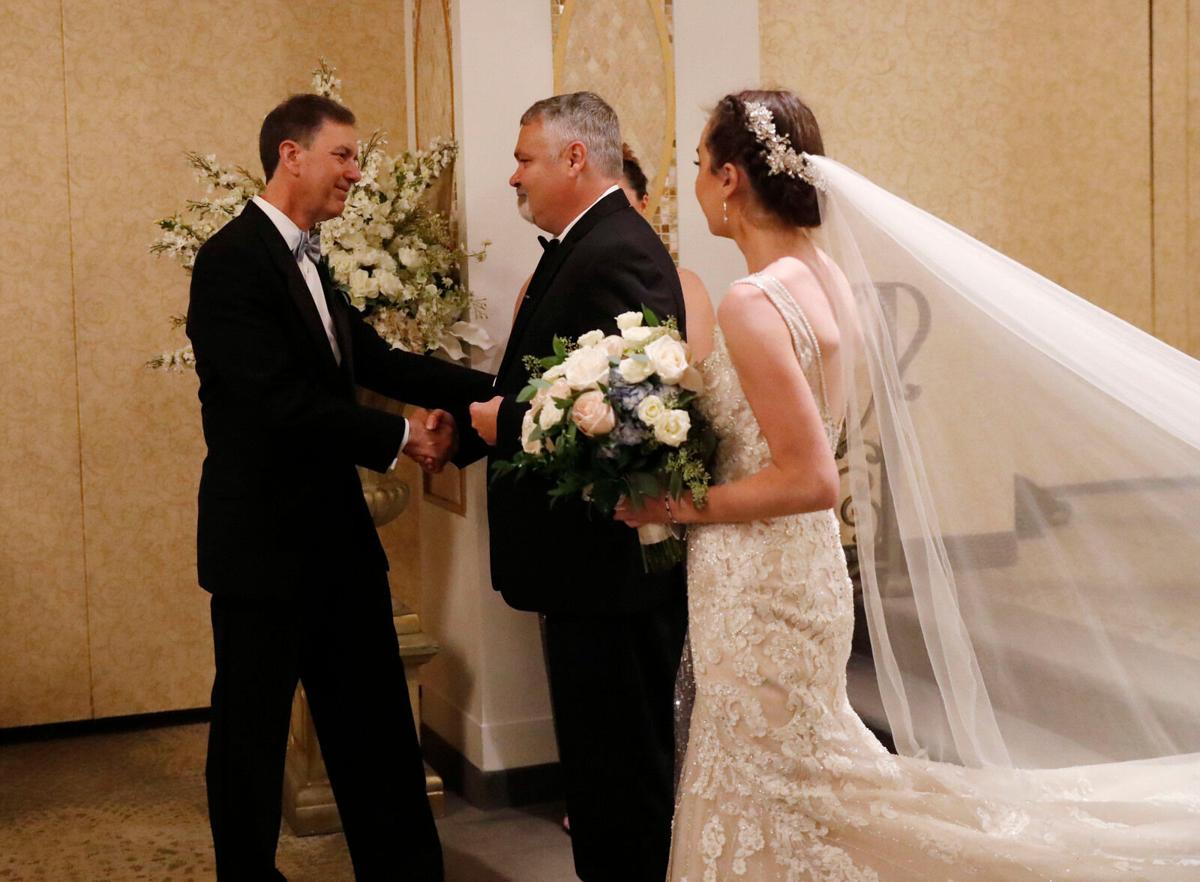 Daniel Donnelly Jr., center, walks Diana Donnarumma halfway down the aisle in her wedding to Conlan Kreher at Salvatore's Italian Gardens, Friday, Aug. 13, 2021. Donnarumma's father, Glen, left, meets them halfway to walk his daughter the rest of the way.

A young woman living in Texas never made it to her wedding four years ago.

But thanks to that woman's lifesaving gift, Diana Donnarumma of Clarence had her dream wedding Saturday.

Donnarumma was one of eight people who received organ transplants from Heather Renee Donnelly in 2017 after she died in a car accident in Texas – three days before her wedding.

Photos: An organ donor's dad walks the recipient down the aisle

On Friday, Donnarumma, 28, was married at Salvatore's Italian Gardens in Lancaster. And it was Donnelly's father who walked her halfway down the aisle.

"I try to carry on her spirit the best I can every day," Donnarumma said. "And I felt like I needed to – but also I wanted to – give her father the opportunity."

After Dan Donnelly walked Donnarumma halfway down the aisle, Donnarumma's father, Glen, took over and escorted her the rest of the way.

“It was honestly everything I could have hoped for and more," the bride said of her wedding. "It was filled with emotions and laughter and tears and overwhelming joy."

Donnarumma grew up in Clarence. A debilitating gastrointestinal condition had forced her to live on intravenous nutrition. After three surgeries in nine months, Donnarumma received a lifesaving transplant in 2017, when Donnelly died; Donnarumma received Donnelly's small intestine and the right portion of her large intestine.

A life cut short and another renewed

Heather Donnelly was on her way to a friend’s birthday party in October 2017 when she was fatally injured in an automobile accident in which police were engaged in a high-speed pursuit of a suspect.

She was 26, only a year older than Donnarumma, and had received her master’s degree in counseling months before from Texas A&M Corpus Christ campus. She wanted to work with children.

“There were lots of kids at her funeral. It was just unbelievable all the little kids that were coming there from day cares and everywhere. It was just amazing,” Dan Donnelly said.

He did not know his daughter was an organ donor until he arrived at the hospital.

In 2019, soon after Conlan Kreher proposed to Donnarumma at the eternal flame at Chestnut Ridge Park, Donnarumma had a “gut feeling, pun intended,” that she would ask Heather’s father to participate in the wedding.

“I was very honored when she asked me about doing it," Donnelly said Saturday. "I’ll never get that chance.”

Donnarumma's wedding on Friday was "beautiful," Donnelly said, with dancing and food and people telling him they had heard such good things about Heather – "what she did to save Diana."

But the wedding was also “tough, very tough,” said Donnelly, who lives in Illinois and has a 19-year-old son, Hunter. Donnelly raised Heather by himself since she was 1.

'Now I have a future'

Donnarumma has dealt with health issues from childhood, and in early 2016 doctors at the Cleveland Clinic diagnosed her with gastroparesis, the inability of the stomach to adequately push food further down the digestive tract.

In October of that year, a surgical team performed an ostomy, removing her colon.

In September 2017, Donnarumma learned that she was on the transplant list at MedStar Georgetown University in Washington, D.C.

The following October, a member of the hospital transplant team called her to say they had organs for her. Donnelly’s antibodies and blood type were a perfect match.

Donnarumma continued IV feedings, and vomiting, until spring 2018, when the Medstar Georgetown doctor and his team performed a gastric bypass so Donnarumma's new intestines could carry her digestive load.

Today she still struggles with nausea and vomiting and will be on anti-rejection medication and steroids for the rest of her life, but it’s a night-and-day difference from before the transplant, she said. And she’s eternally grateful to Heather Donnelly.

“I was so physically and emotionally exhausted, but now I have a future,” she said. “I really got to feel all the love ...  of friends and family. I wouldn’t have a future right now. I wouldn’t be getting married without her.”

A serious illness, a rare transplant, and brighter hopes this Christmas for a Clarence family

“People tend to focus on trivial issues but when you stare death in the face, none of these things matter anymore,” Diana Donnarumma

Diana Donnarumma, 26, of Clarence is grateful for a renewed lease on life thanks to rare intestinal transplant surgery for a debilitating gastrointestinal condition that forced her to survive on intravenous nutrition for three years. “People tend to focus on trivial issues but when you stare death in the face, none of these things matter anymore,” Donnarumma said.

Daniel Donnelly Jr. walks Diana Donnarumma down the aisle at her wedding to Conlan Kreher in Salvatore's Italian Gardens, Friday, Aug. 13, 2021. Donnelly's daughter, Heather, was the organ donor for Donnarumma, who had an intestinal transplant in 2017. 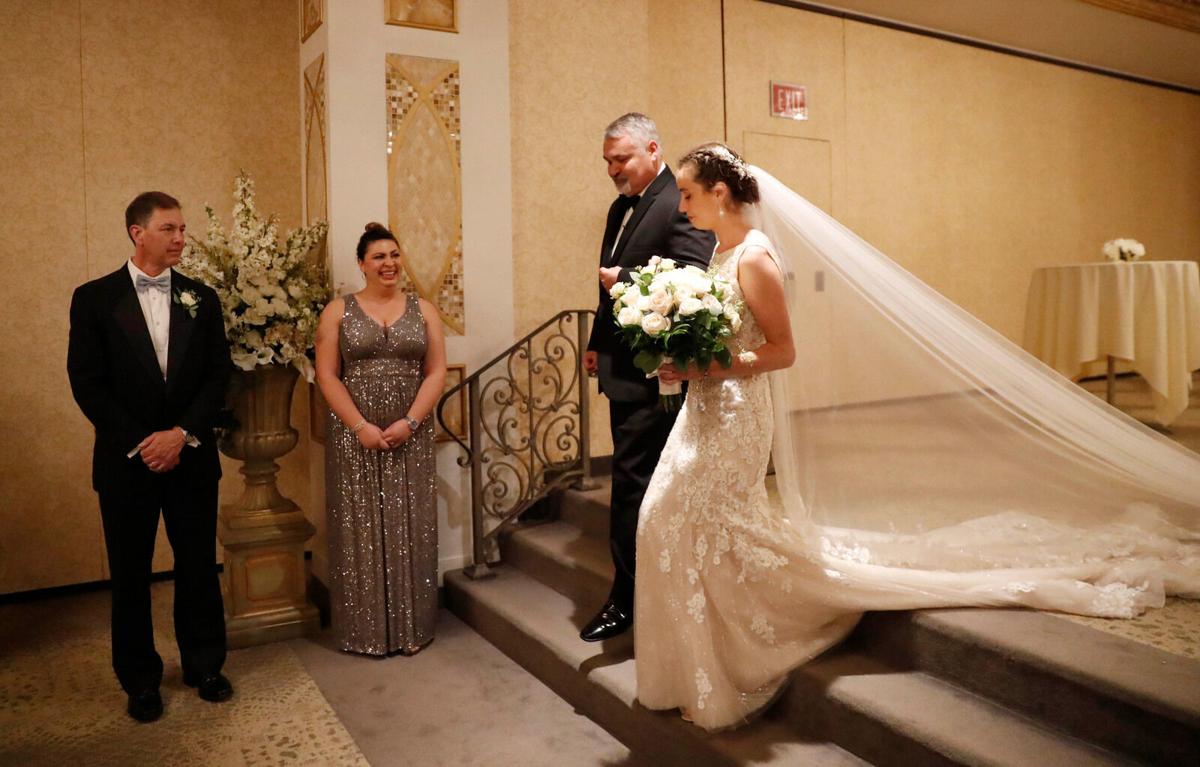 Daniel Donnelly Jr., center, walks Diana Donnarumma halfway down the aisle in her wedding to Conlan Kreher at Salvatore's Italian Gardens, Friday, Aug. 13, 2021. Donnarumma's father, Glen, left, meets them to continue walking his daughter the rest of the way. Also pictured is Lauren Chapnick, who was Donnarumma's nurse practitioner during her stay at Georgetown Hospital in Washington D.C., where Donnarumma received a transplant with organs donated by Donnelly's daughter.

Daniel Donnelly Jr., center, walks Diana Donnarumma halfway down the aisle in her wedding to Conlan Kreher at Salvatore's Italian Gardens, Friday, Aug. 13, 2021. Donnarumma's father, Glen, left, meets them halfway to walk his daughter the rest of the way. 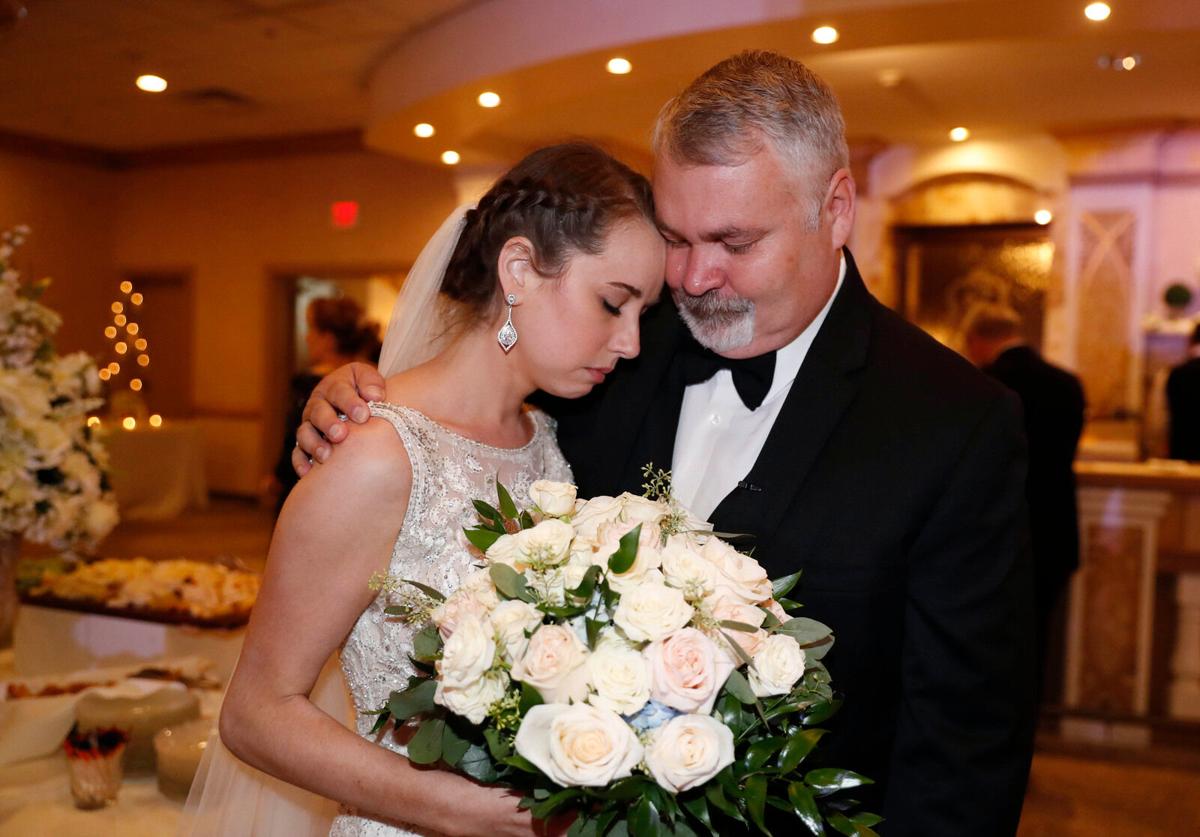 Daniel Donnelly and Diana Donnarumma share a tender and emotional moment after the wedding ceremony. 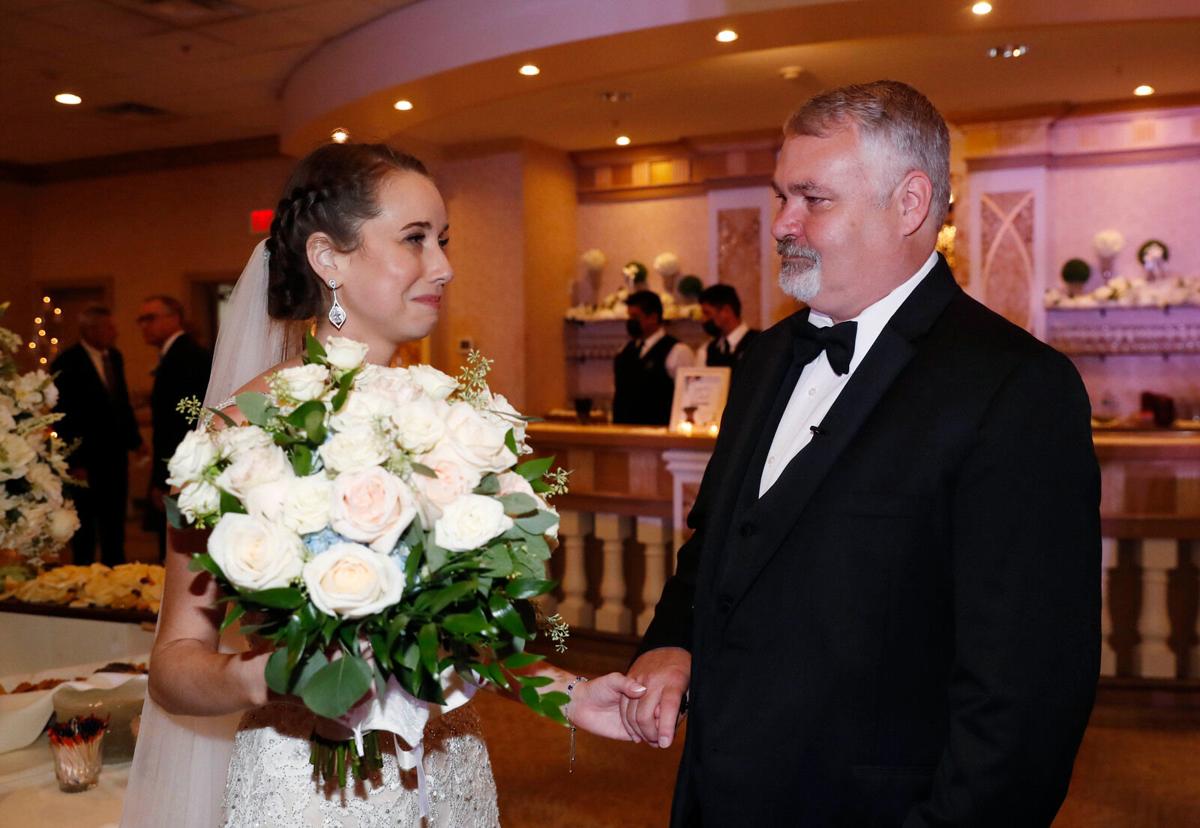 Daniel Donnelly and Diana Donnarumma share an emotional moment after the ceremony. 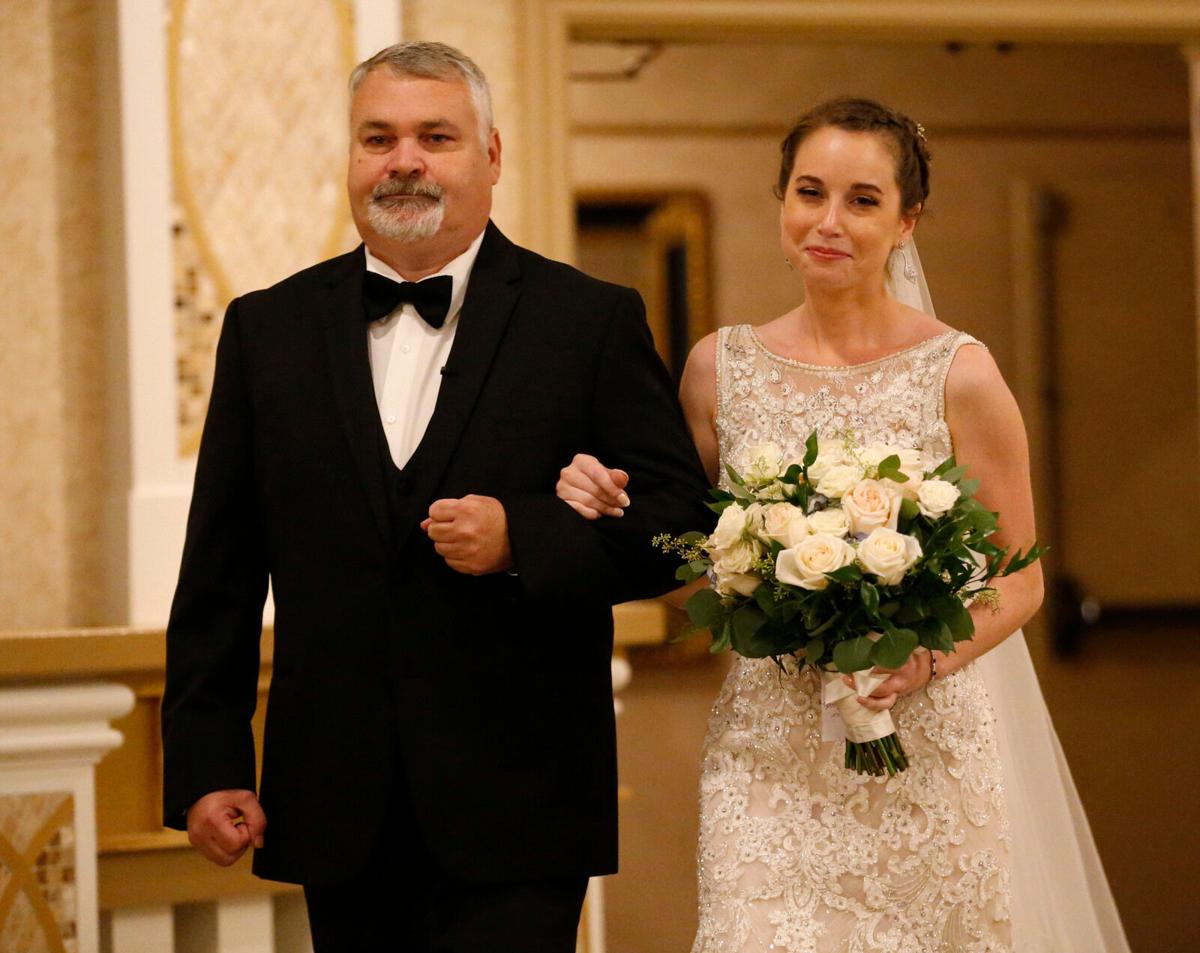