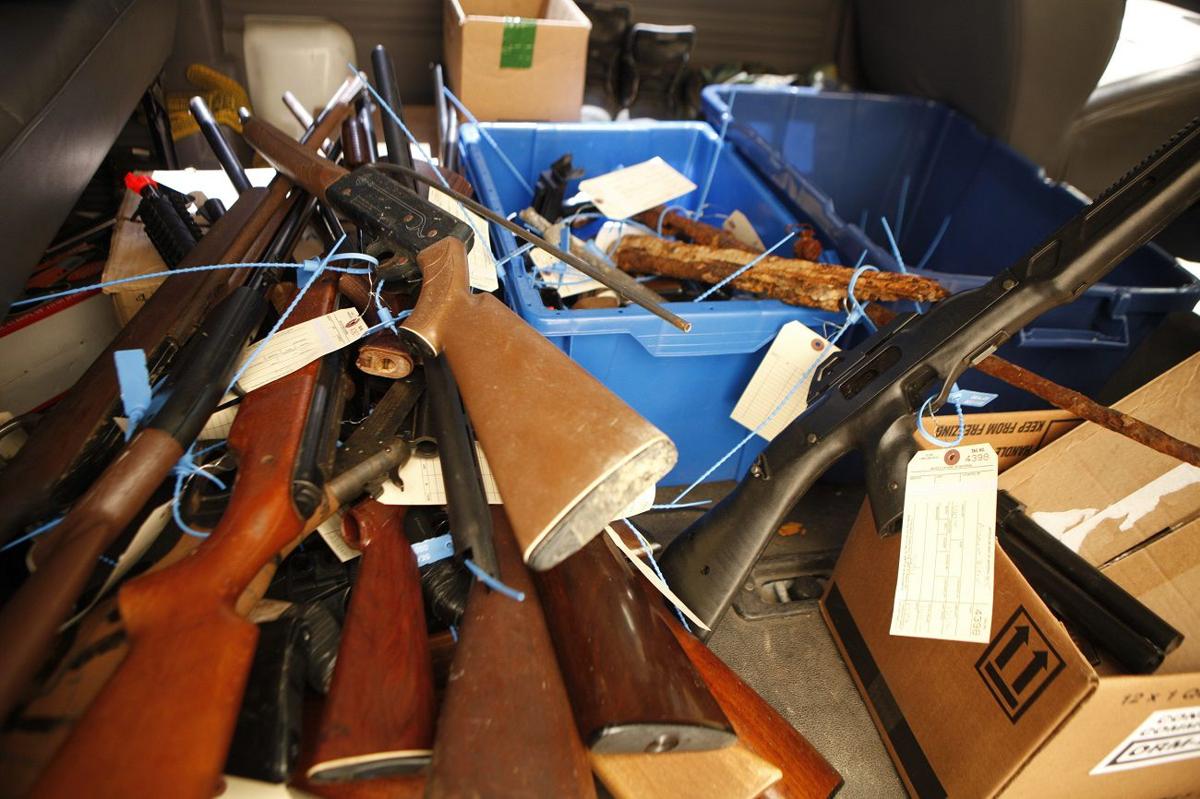 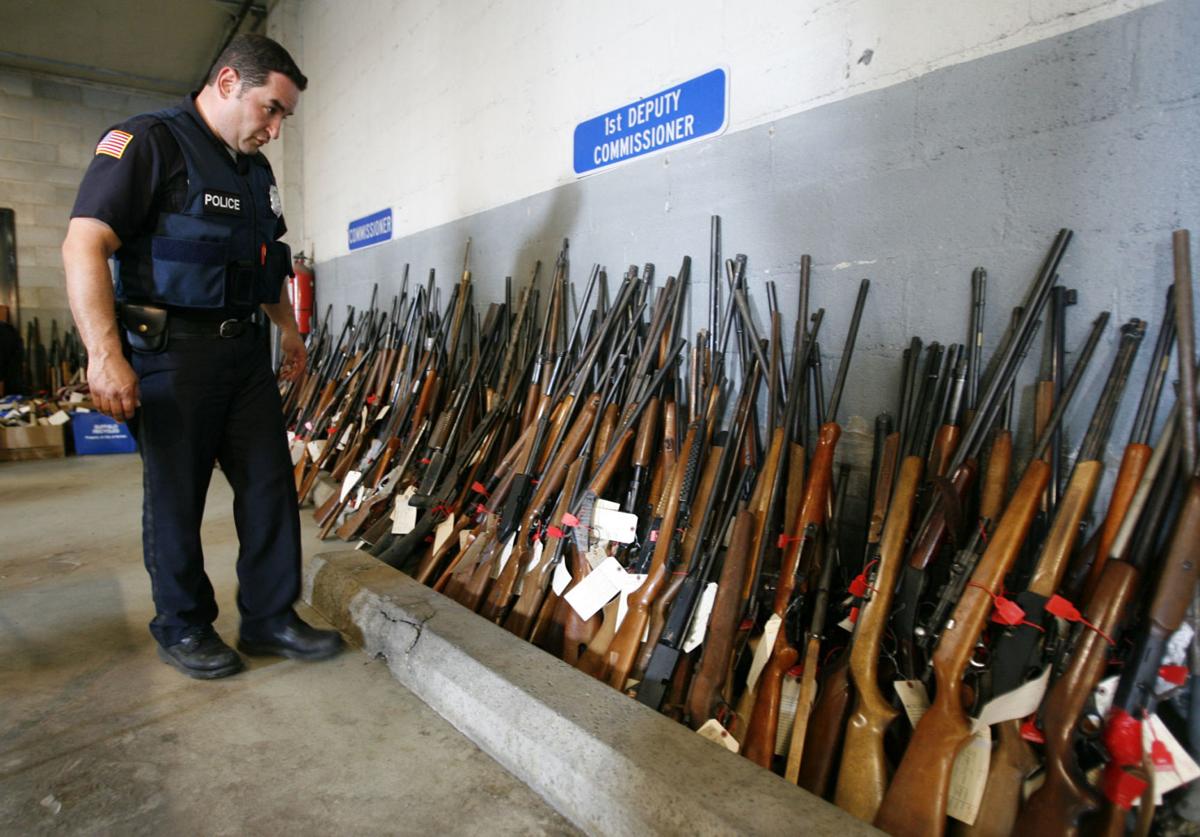 Buffalo Police Officer Martin Forero looks over a large stack of guns that were turned in during a gun buyback event in Buffalo in 2007. (Harry Scull Jr./News file photo)

Gun buybacks have been held in the United States since the early 1990s based on the premise that taking firearms off the street will help make communities safer.

Academic research into the subject, however, has found no evidence that these events actually contribute to a reduction in crime.

So when people line up outside the old Niagara Falls police headquarters on Thursday to turn over unwanted guns, they will get gift cards worth up to $100, depending on what type of firearm they show up with.

But they won't see lower levels of crime because of such events, researchers predict.

Scott W. Phillips, an associate professor of criminal justice at SUNY Buffalo State, has studied gun buybacks and their impact on violent crime. Phillips and colleagues at Buffalo State used crime data in Buffalo to assess the impact of five gun buybacks between 2007 and 2012. Research here and in cities across the country has demonstrated that gun buyback programs don't reduce crime, he said.

"Does it work? No," Phillips said. "Should they keep doing it? I wouldn't bother wasting their time."

Thursday's gun buyback in the Falls is sponsored by the state Attorney General's Office, which says it has held more than two dozen of these events across the state since 2013. In total, they've gotten more than 1,200 guns from the public. Of the firearms they've received, more than 550 have been working handguns, and there have been more than 400 rifles, shotguns and assault weapons, the office said.

The attorney general's office did not contest the lack of evidence in academic research that buybacks have an effect on crime, but a spokesman characterized the buybacks as one of a number of efforts by the AG aimed at reducing gun crimes. Those efforts include curbing the illegal sales of firearms on Facebook and Instagram and ensuring that background checks are done on nearly every gun sold at gun shows.

There were 19 people shot in the Falls last year, according to data from the state Division of Criminal Justice Services, which computes into a rate of 39 people shot for every 100,000 in population. That's less than the average shooting rate in the city from 2006 through last year of 48 individuals per 100,000.

Niagara Falls Police Superintendent E. Bryan DalPorto said his department isn't naive enough to expect gang members to show up and hand over their guns, but he believes the buybacks do serve a purpose.

"We get folks that just want an outlet to get rid of unwanted firearms," DalPorto said.

Those can be elderly individuals with guns in the attic that belonged to a spouse who passed away and who don't know of any other way to dispose of the guns, he said. Getting those guns out of homes also eliminates the chance they may be used to commit a crime in the future, the police superintendent said.

Paul McQuillen, upstate coordinator for New Yorkers Against Gun Violence, vouched for the importance of holding buybacks. He said while most of the guns that get turned in don't come from criminals, they do come from average citizens who want want to feel safer with the firearms out of their homes.

[Buffalo's danger zone: Life in the heart of the city's gun violence epidemic]

The attorney general's office has co-sponsored two prior buyback events in the Falls. To pay for the gift cards, the office uses funds seized in criminal investigations. A series of buybacks in Buffalo over several years cost $240,490, the News reported last year.

The attorney general's office was asked how much prior buybacks in the Falls have cost, as well as costs on buybacks statewide, but no cost information was provided.

Phillips, the Buffalo State professor, said the types of firearms turned over at buybacks are generally not the kinds used in crimes. They're also generally older weapons and sometimes they're not even functional.

There's also no academic research that shows a reduction in suicides or accidental shootings due to gun buybacks, he said.

Gun buybacks are often held because they're relatively easy to do and the public expects – or even demands – them, Phillips said. Elected officials often conduct them for purposes of good public relations, he said.

Guns turned over at buybacks are destroyed and not processed as evidence, authorities say.

Hundreds of guns turned in during city’s buyback program

Officials have located a male body in the lower Niagara River on the fourth day of a search after a teenager who was fishing with his father slipped into the swift current and disappeared.

Buffalo Police Officer Martin Forero looks over a large stack of guns that were turned in during a gun buyback event in Buffalo in 2007. (Harry Scull Jr./News file photo)