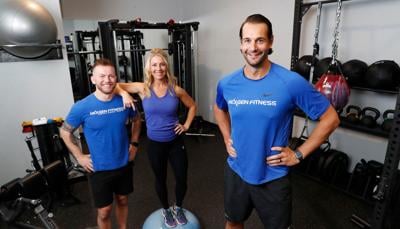 As painful as this is for many Bills fans to hear, Rob Gronkowski credits Tom Brady for many of the fitness and rehab strategies he used to come out of retirement and win the Super Bowl last season with the Tampa Bay Buccaneers quarterback.

“I was able to take a year off and let my body recover and really learn what I need to do to stay healthy to play at the level that is required in the NFL,” Gronkowski told The Buffalo News in an email. “Football was not becoming fun, and I needed to recover physically and mentally.”

Gronkowski did so with resistance training designed to boost endurance and improve body function, as well as a comprehensive recovery strategy. Brady – who also won three NFL championships with Gronk while the two played for the New England Patriots – uses most of them as he continues to excel at age 44, according to the tight end who grew up in Amherst.

“With a year off, I was able to focus on my body and mind. Eating healthy and getting the right nutrition is key to recovering no matter who you are. Unless you have a very severe illness, your body can do amazing things if you treat it right," Gronkowski said.

NexGen Fitness Buffalo – opened downtown last May – incorporates many of the same strategies, but General Manager Dan Gronkowski doesn’t want to leave the impression that the studio was designed with athletes in mind.

“This is where fitness is going. Not only are you getting your workout in but also recovering here,” said Dan, the second-oldest of five Gronkowski brothers, who all play a role in the new enterprise, along with their father, Gordie Sr., a former Syracuse University football offensive lineman.

Gronk and at least some of the family members also have a piece in several other businesses: G&G Fitness Equipment, launched by the Gronkowski patriarch in Western New York 35 years ago (Dan oversees online sales); Ice Shaker, a novel protein shake container invented by Chris and featured on "Shark Tank"; InSite Media Services, which manages Rob’s brand and nego­tiates his sponsorship deals; Gronk Fitness equipment; and The Gronks, a YouTube Channel, launched in summer 2020, that boasts 105,000 subscribers.

G&G supplied Texas-based NexGen with equipment for its first dozen franchise locations, all in the Lone Star State, as well as the Buffalo site. The Western New York company will continue to do so as NexGen opens about 20 franchises next year across the country. The arrangement also allows the Gronkowskis to run the NexGen Buffalo studio at 50 Fountain Plaza.

A recovery wing features ice therapy, two infrared saunas, light therapy facials and a salt room where fine Himalayan rock salt is strewn about on the floor and infused gently in a fine mist through the room.

“This is all of our soul therapy,” studio manager Jennifer Glowacki said during a recent tour of the wing. The certified personal and group fitness trainer also teaches yoga. She left a job in Florida last spring that focused largely on rehabbing injured golf and tennis players.

Studio training starts on a Styku 3-D body scanner that measures 21 health markers, including body mass index. If waist circumference is in a high-risk zone, results will include associated disease risks. Glowacki and her staff individualize eight-week training programs as clients set their goals.

“It's all the midline areas where our clients lose most commonly,” Glowacki said. “Almost everyone needs that.”

Clients can control the music as they exercise. They wear a heart rate monitor.

Clients work out by themselves or with a partner of their choosing in each suite, so there are no more than four clients training in the studio during each 45-minute session.

“You're not gonna find anything more Covid friendly than this,” Dan Gronkowski said.

Three clients talked earlier this month about how trainers, and studio features, helped them reach goals that at least partly eluded them beforehand.

“I come from being underweight my whole life and hearing, ‘You look sick, why don't you go eat a cheeseburger,' things like that,” said Chelsea Liszkiewicz, 30, of Blasdell. “It can really give you a lot of self-esteem issues as a young girl.”

Liszkiewicz, a single mom and co-owner of Forever Organizing, works out twice a week at NexGen and three times a week at home.

Her weight climbed after the birth of her daughter, Lilyanna, five years ago. She lost it doing online workouts but people started telling her she looked too skinny again.

“I wasn't comfortable going into a gym. I wasn't confident enough in myself to even know what I was doing,” said Liszkiewicz, 5-foot-7, who started workouts in May.

Within eight weeks, she lost four pounds. She weighs 143 pounds, but more importantly lost 8.8 inches across her measurements while losing body fat and adding muscle.

“I don't do a lot of cardio when I'm here,” she said. Strength training focuses on arms, core, lower body and improving balance. Glowacki also has encouraged her to add more healthy fats and carbs to her diet. Staples of her eating plan include chicken, brown rice and vegetables.

Larry Cohen, of Williamsville, describes himself as a “classic corporate executive workaholic who self-medicated with alcohol and food” while working at Xerox for 25 years.

He drank regularly, but not excessively, after work. His diet included fast food, chips, pretzels and cheese Triscuits, mostly between 7 p.m. and bedtime.

That changed eight years ago in September, when the 5-foot-9 Cohen, then 58, was diagnosed with congestive heart failure after a medical emergency.

“At that time, I weighed about 250," he said. He started eating less and exercising more with help from personal trainers. His son, Michael, who played baseball with Dan Gronkowski at Williamsville North High School, recommended last May that Cohen check out NexGen.

“I didn't think that this would be the type of place for me,” he said. “I just had a stereotype in my mind that boys are going to be pushing big weights.”

A heart rate monitor helps guide his workouts. A related software system tracks percentage of maximum heart rate and whether someone is in the fat- or carb-burning zone during exercise, said Dan Wrobel, head trainer and assistant studio manager.

Cohen’s workouts focus on strength and function, keeping him in the blue fat-burning zones. Those looking to burn carbs focus on more high-intensity interval training.

“The main part of my meal is usually a salad base with chicken or salmon on top,” Cohen said. “If I have a carb, it's carefully measured.” He rarely drinks alcohol or eats red meat.

Cohen dropped 15 pounds in 16 weeks. He weighs 211 pounds and aims to lose 15 more. His posture, balance, sleep and general disposition have improved.

“For the first time in my adult life, 100% of my blood work is in range,” he said. “My doctor made the comment, ‘I wish my cholesterol was as good as yours.’ ”

Cohen has long taken insulin and metformin for Type 2 diabetes. He stopped needing insulin this month, as well as a medication to slow his heartbeat.

“I have much more of a positive attitude,” he said. “I have way more energy.”

Dr. Azima Rasiwala has worked in the Sisters of Charity Hospital emergency room for the last 2½ years.

“I have worked out with many trainers and have seen really great results,” she said. “I don't do it for weight loss, I do it to kind of keep my mind sane. After working in the ER, I need relief.”

Rasiwala, 39, lives on the West Side, five blocks from the NexGen studio, often walking to workouts she started in June. The location and hating the way she looked in a dress she bought while in medical school figured into the decision. The 5-foot-5, 130-pound doctor lost two pounds within six weeks but built more muscle tone as she slimmed down – and fit into the dress.

Time in the sauna and salt room has soothed her spirits, asthma and seasonal allergies.

She has lost weight on keto diets but found them unsustainable. She likes the more balanced, mindful approach she is learning. Wearing the heart monitor underlines how her food and exercise choices impact her weight and disposition, she said.

“I’ve got to tell patients that a healthy lifestyle goes a long way,” she said, “and it's very hard in this day and age when everything is packaged, everything is processed. People don't understand the meaning of nutrition. It's important for me to say, ‘I take care of myself, and you can, too, one step at a time. There are a lot of people that can help you.’ ”

Other clients include a 66-year-old retiree who reached his goal to play in a lacrosse championship; someone who rehabbed from knee surgery and is now back on the basketball court; and someone battling cancer.

“We're here to keep people moving their whole life,” Glowacki said. “There should be no restrictions because of how old you are or because you've had an injury or a setback.”

The studio is package-driven, not membership-driven, she said. Personal training sessions cost $65 to $85, with lower rates if working out with a partner or longer term. Recovery sessions run about $40. Learn more and sign up for a tour and free abbreviated session at buffalo.nexgenfitness.com.

“The money part is relevant,” Liszkiewicz said, but she sees it as an investment in a more productive life with far fewer health costs in the long run.

“This has changed my outlook on myself, my workouts,” she said. “It's been a complete game changer.”

A peek at the Gronkowski clan's new fitness studio downtown

The Gronkowskis’ NexGen site occupies about 4,000 square feet on the first floor of Fountain Plaza in downtown Buffalo. 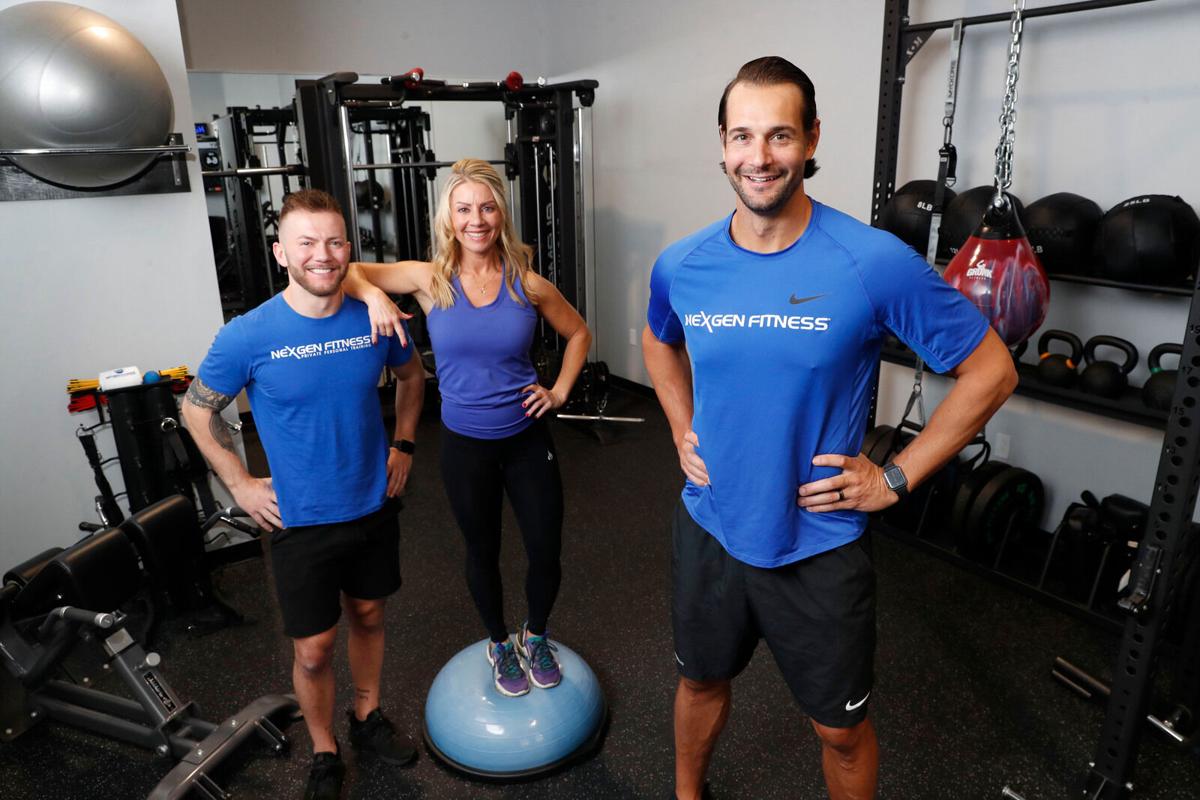 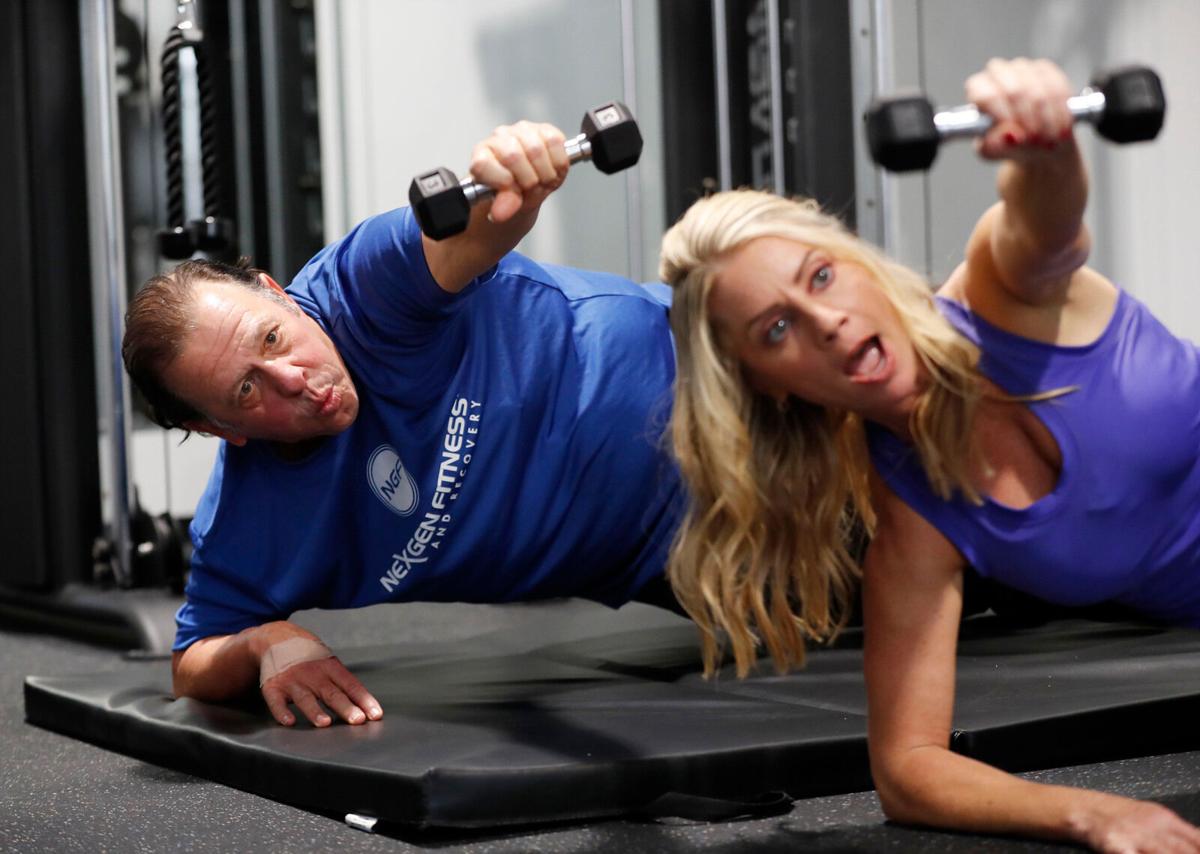 Larry Cohen does side plank punches with NexGen Fitness Buffalo studio manager and personal trainer Jen Glowacki. Cohen, 66, of Williamsville, a self-described retired “classic corporate executive workaholic who self-medicated with alcohol and food,” has changed his diet, lost weight and built muscle tone with help from Glowacki and other studio staff. 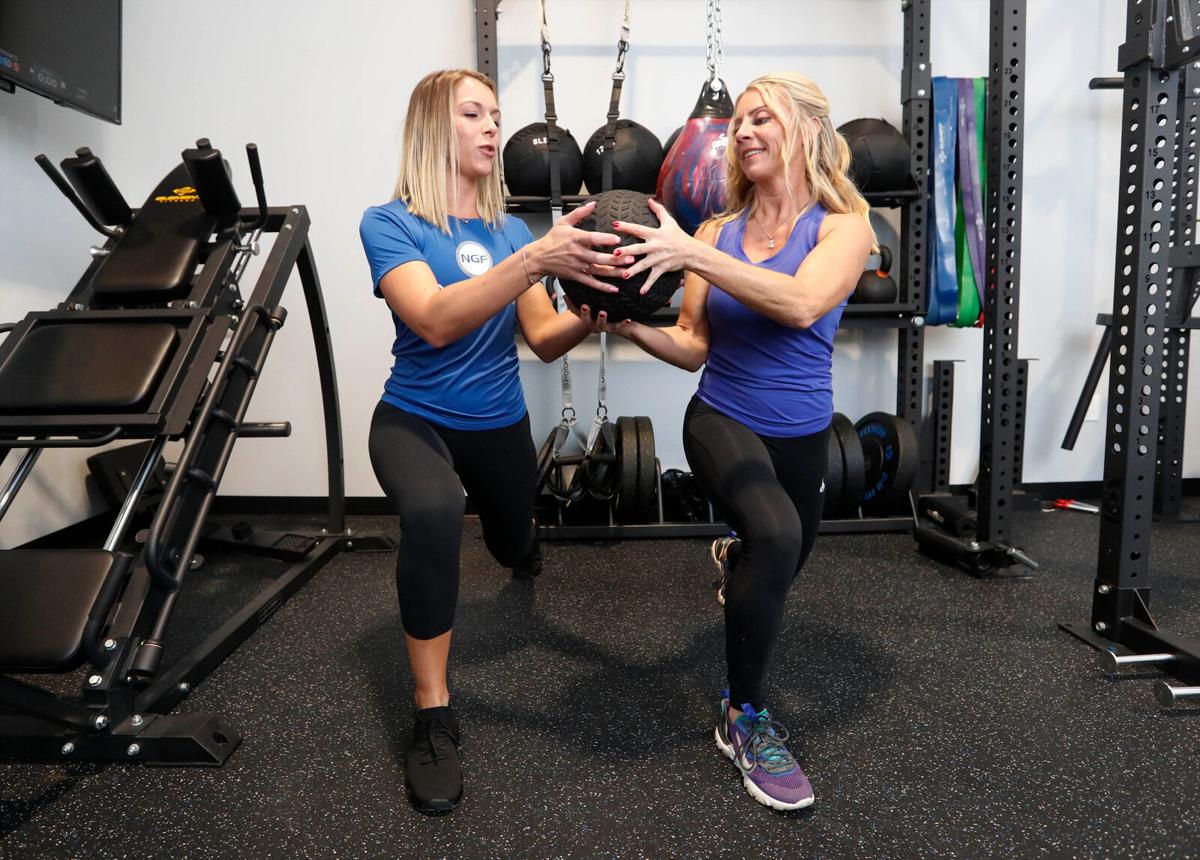 Client Chelsea Liszkiewicz, left, 30, of Blasdell, has varied in weight during the last five years. Trainer Jen Glowacki, right, has been among those who have trained her to eat healthier and work out more effectively. 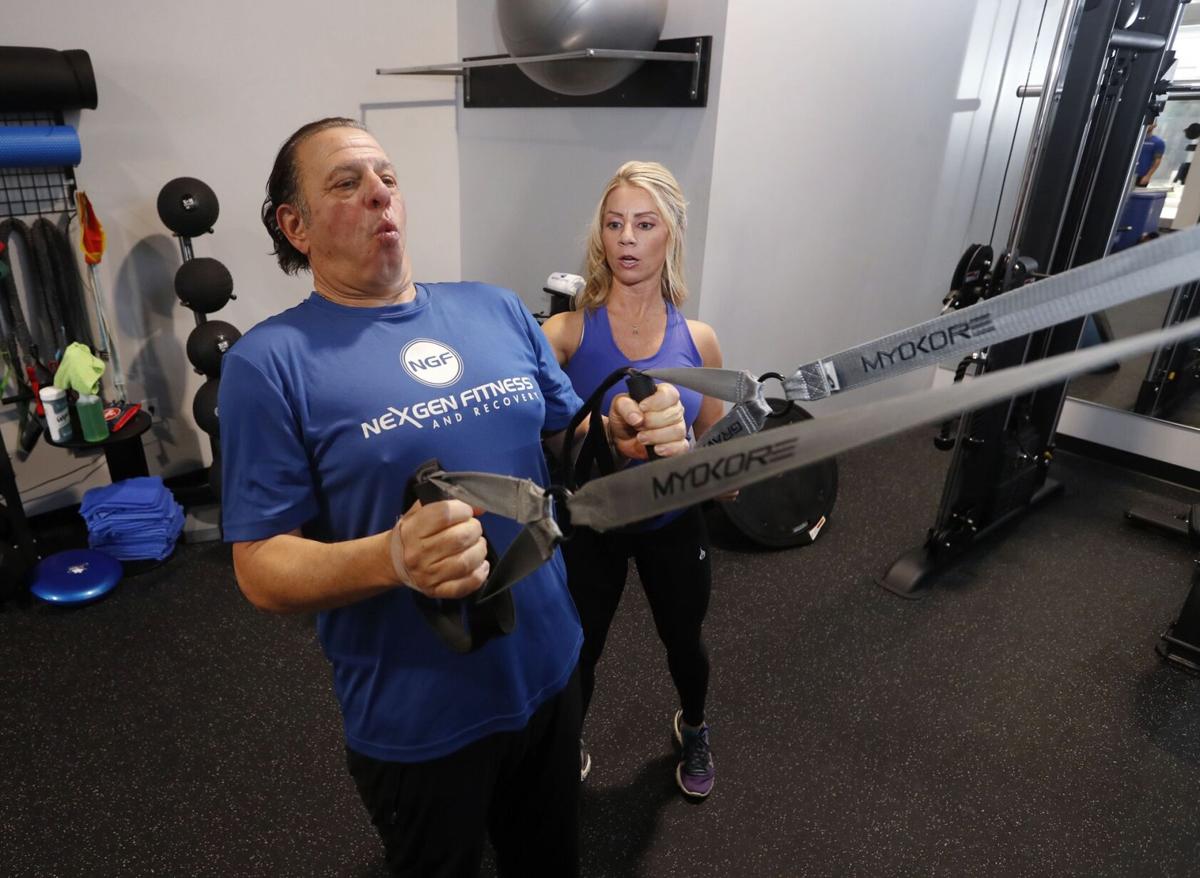 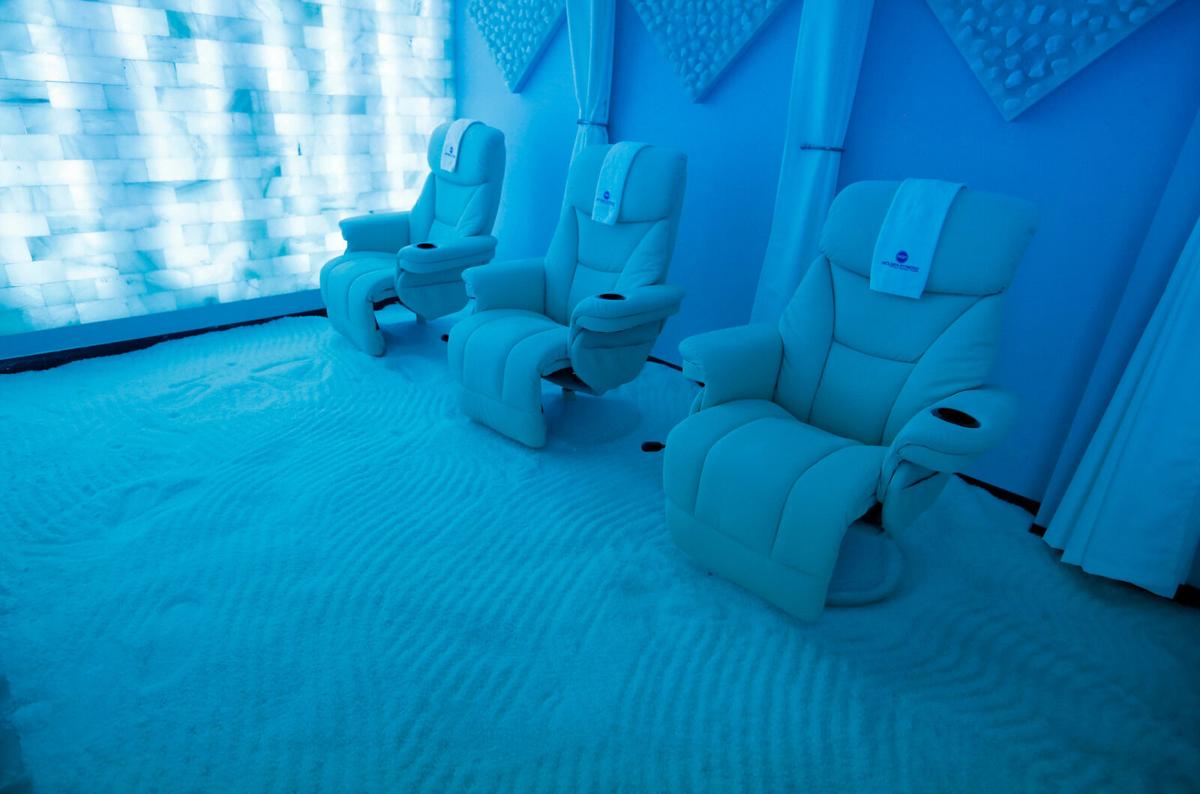 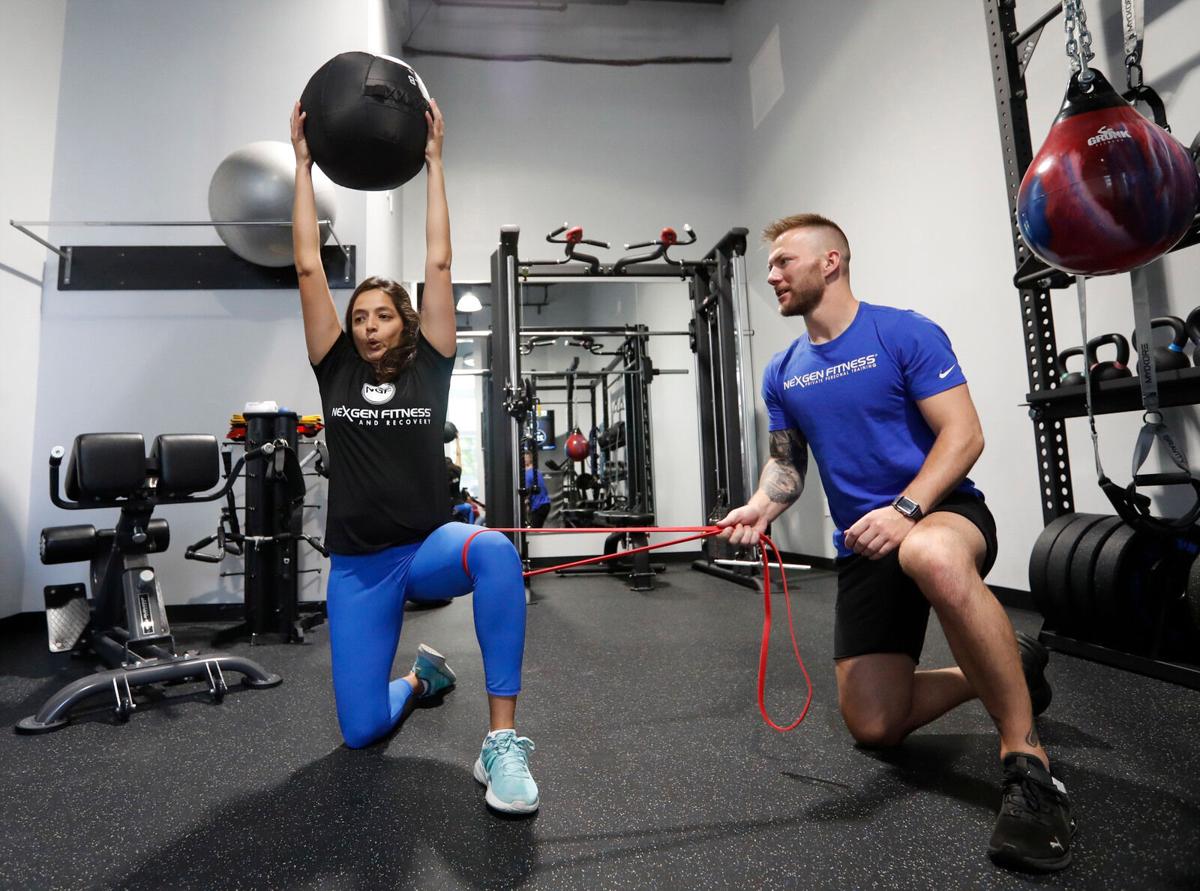