Retired Buffalo Fire Commissioner Garnell W. Whitfield said his family still hasn't informed his father that his mother, Ruth, "the love of his life," was one of 10 people killed in the hate-fueled mass shooting Saturday at a grocery store on Buffalo's East Side.

Ruth Whitfield was devoted to her husband of 68 years, Garnell Sr., and visited him daily at the HighPointe on Michigan nursing home to attend to his needs, including earlier on the day she died.

"He's missing her now. It's a couple of days it's been. She doesn't miss a couple of days. What do we tell him?" Whitfield asked Monday at the Buffalo Fire Department station a block away from the Tops Markets on Jefferson Avenue targeted by the gunman.

Whitfield, standing in front of heartbroken family members, alternated between grief and anger as he discussed the racist shooting and its aftermath.

He was joined by current Fire Commissioner William Renaldo, city firefighters and Mayor Byron W. Brown, who vowed to support the relatives of all the victims of Saturday's massacre.

"There's a special bond in the fire department, not just with the community, but with each other," Renaldo said.

The retired commissioner vowed he and his family will work to make sure positive change comes out of this tragedy and to hold those responsible accountable. He pointed specifically to those who allowed the accused gunman access to weapons.

"My mom loved us unconditionally. She loved this community, loved people, unconditionally. And for her to lose her life at the hands of a hatemonger, an evil person, is more than we can bear," Whitfield said.

Brown decried how the accused gunman from Broome County in the Southern Tier was able to easily absorb racist ideology on the internet and acquire powerful weapons.

"Guns are too available in this country. The internet is too unregulated as it relates to hate speech," Brown said. "And there is too little support for people with mental health issues in communities all across this country."

The group at the news conference included six firefighters who responded to the Tops market after the shooting. Their firehouse is about a block away and the firefighters regularly buy groceries there.

Fire Lt. Matt Ersing said the emergency call Saturday was followed soon after by someone rapping on the firehouse door asking for help.

The first firefighters to arrive, Ersing said, "saw the officers holding the individual at gunpoint. And then we waited till it was safe enough and we could get in there and help as much as we could."

The crew didn't find out until later that one victim was the former commissioner's 86-year-old mother.

"You don't know who the individuals are. You treat them with as much respect as you can and give them the care you possibly can," he said. "And, hopefully, we don't see another one of these in our careers in our lifetimes."

Payton Gendron said he decided to use an AR-15 semi-automatic rifle in his killing spree both for its effectiveness and potential to generate controversy.

U.S. Senate Majority Leader Charles Schumer on Monday blasted those he described as purveyors of "replacement theory," which he credited with having a strong influence on the 18-year-old perpetrator of a racially motivated mass shooting that killed 10 people and wounded three others Saturday at a Tops supermarket in a predominantly Black neighborhood in Buffalo. 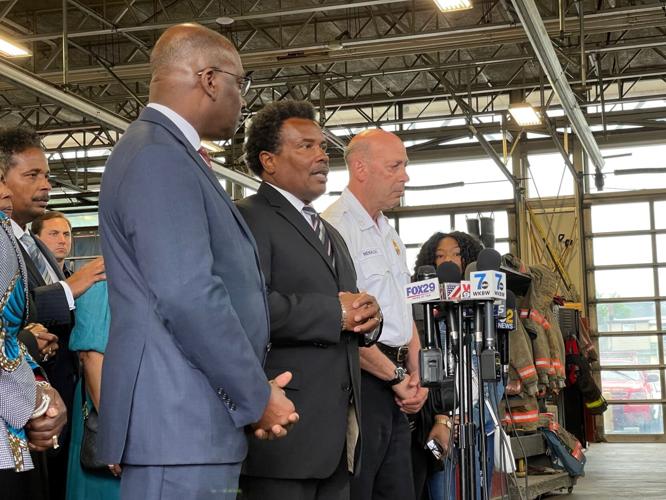 Retired Buffalo Fire Commissioner Garnell Whitfield, center, discusses his family's grief at the loss of his mother, Ruth, who was one of the 10 people killed in the racist attack at Tops Markets on Saturday. He spoke Monday at a fire station near the grocery store. Buffalo Mayor Byron Brown is at left and Fire Commissioner William Renaldo is at right. 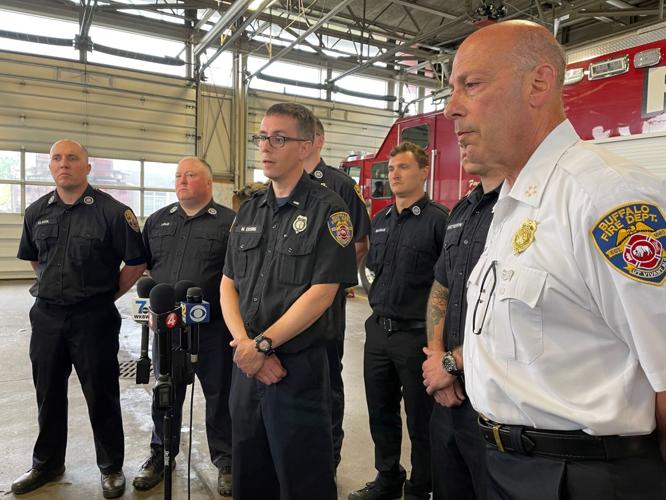 Buffalo Fire Lt. Matt Ersing, at microphones, on Monday discusses how firefighters from his station responded on Saturday to the mass shooting at the Tops Markets store that is one block away from their firehouse.