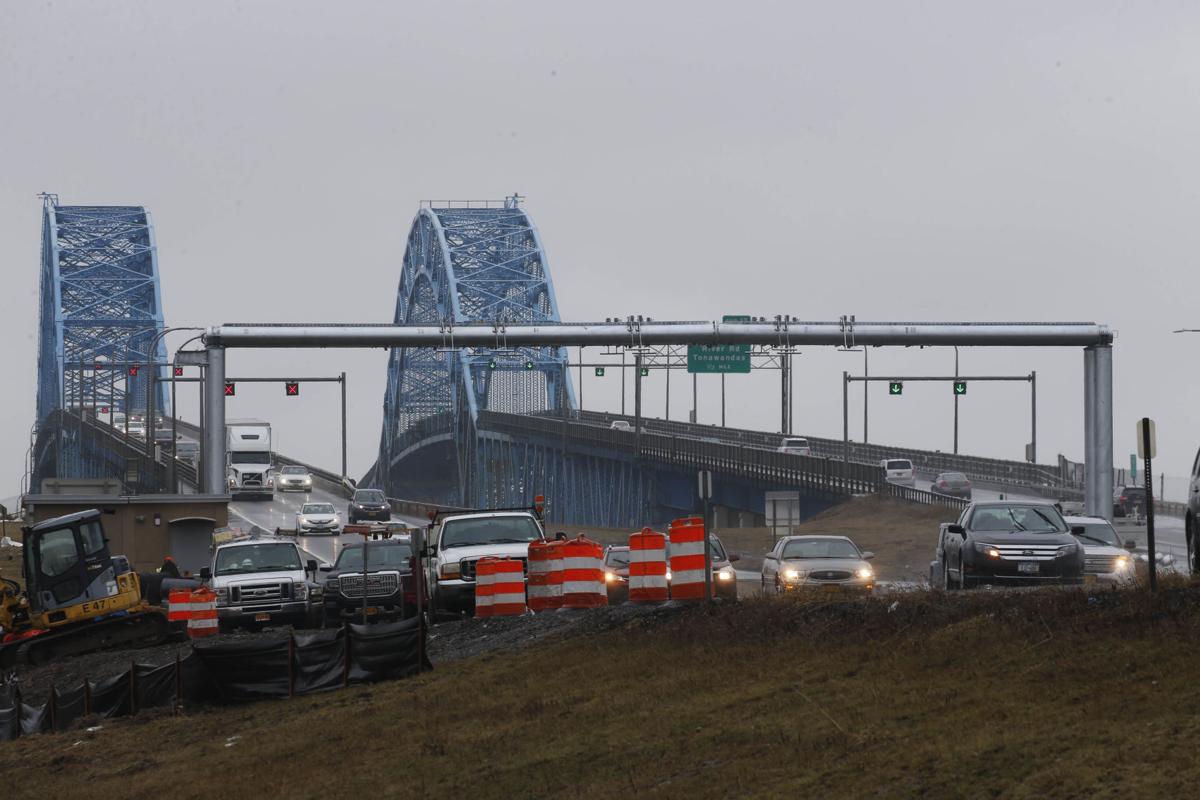 Workers are installing a gantry that will hold equipment for a cashless toll collection system on the I-190 at the South Grand Island Bridge, Wednesday, Feb. 21, 2018. (Derek Gee/Buffalo News) 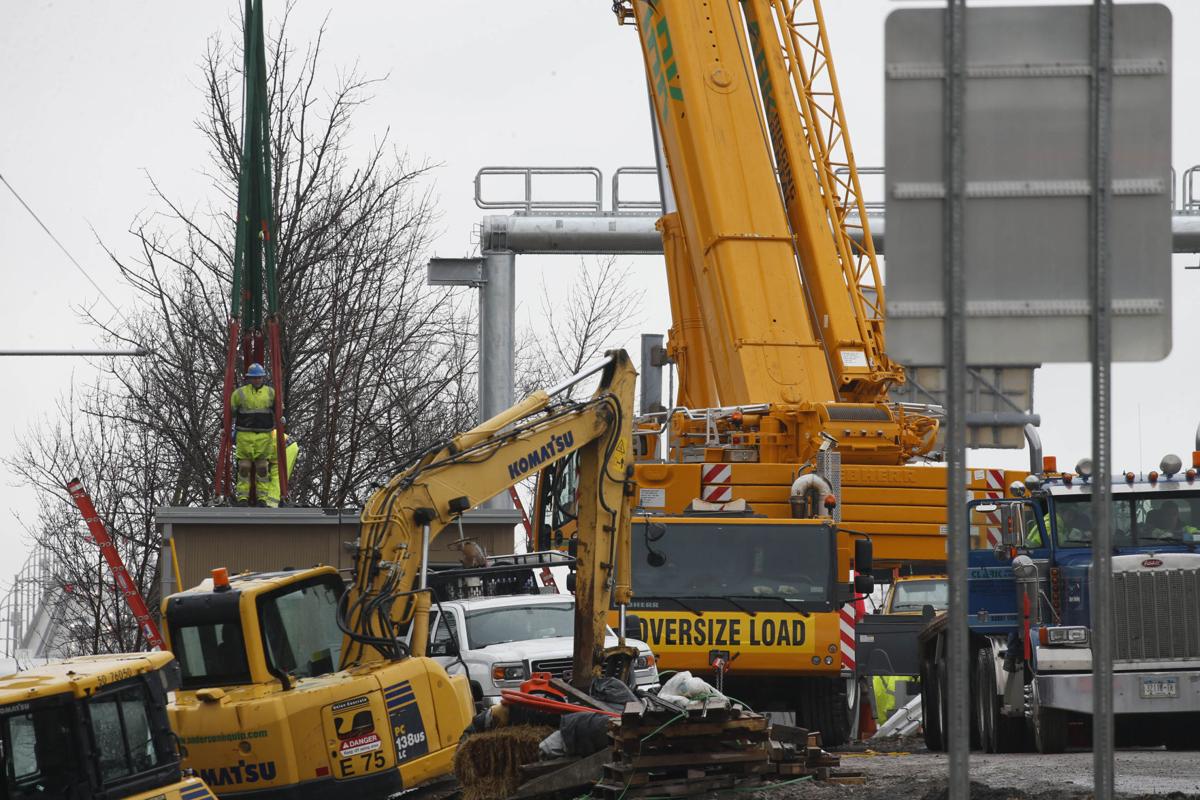 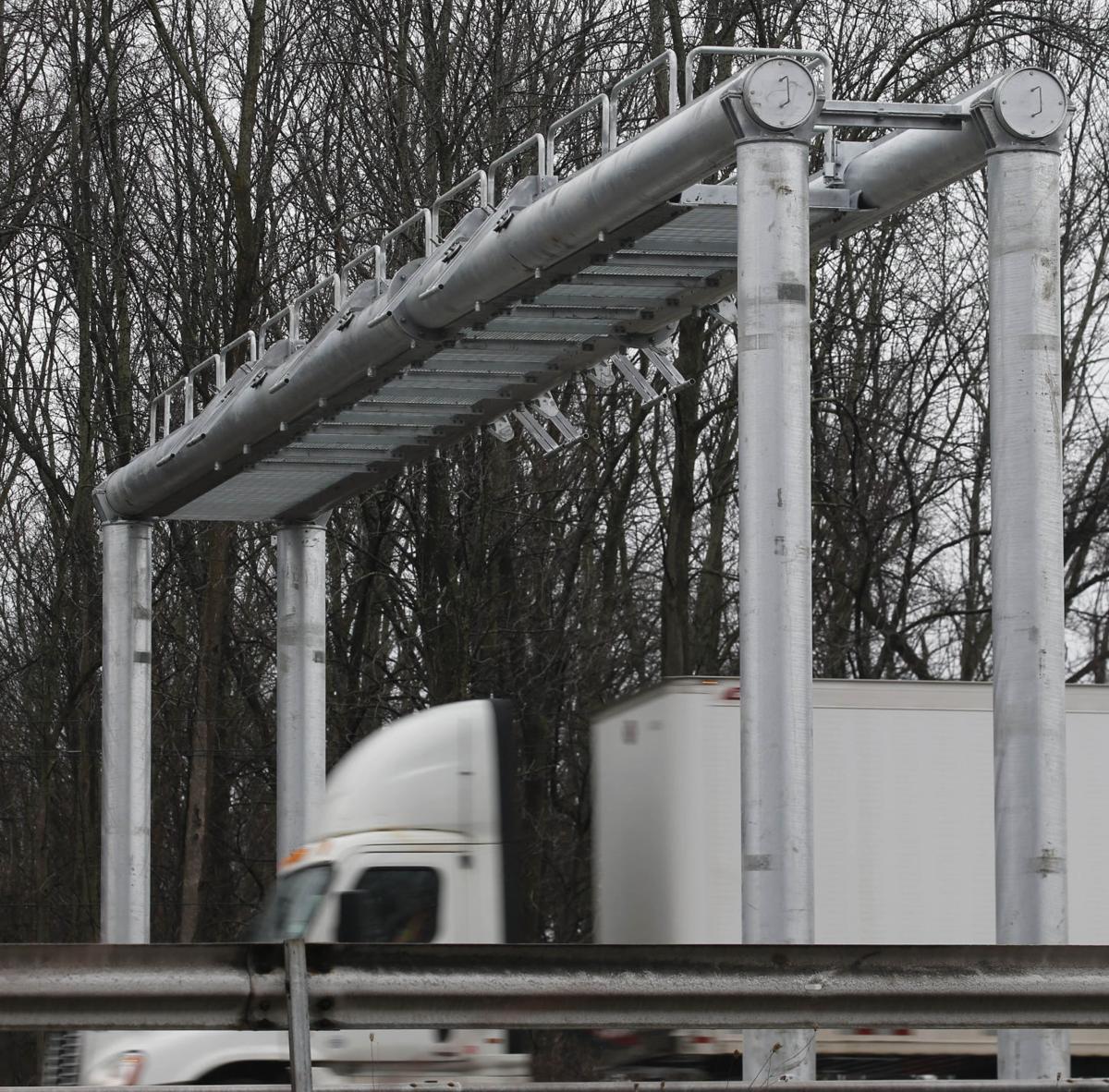 A tractor trailor passes beneath a gantry that will hold equipment for a cashless toll collection system on the I-190 South at the North Grand Island Bridge. (Derek Gee/Buffalo News)

The beginning of the end of stopping – or even slowing – to pay tolls on the Grand Island Bridges has begun.

Jonathan Dougherty, deputy director of communications for the Thruway Authority, said it will be some time before the tollbooths disappear, but the cashless tolling system on Grand Island is scheduled to be in operation by the end of March.

"It's the first time in 80 years that you won't have to see a person there and give them your money," said Town Supervisor Nathan McMurray, who has been working on the toll issue since he took office in 2015.

The new system does not end the practice of paying to use the Grand Island bridges, a different fight that also has been waged for decades and has been the subject of endless debate between residents and public officials. But cashless tolling is expected to have an impact on the flow of traffic at and near the bridge. Here's how the system will work:

For now, Grand Island will become the second location in New York to install cashless tolling, following a system in place at the Gov. Mario M. Cuomo Bridge over the Hudson River.

If Gov. Andrew M. Cuomo has his way, these will be the first steps toward the elimination of tollbooths in New York State by the end of 2020. He outlined his plan to do so during his State of the State address last month.

That is music to the ears of Amherst Supervisor Brian J. Kulpa, who met last week with Acting Thruway Authority Director Matthew Driscoll and Thruway leadership. He said they talked about removing the Williamsville toll barrier and was assured that Cuomo is committed to completing the switch to cashless tolling by 2020.

"I'm optimistic that the Thruway Authority is going to uphold this and what a difference this would make," Kulpa said.

He cited a 2006 traffic study found that traffic on Main Street in Amherst would be reduced by 10 percent – or 3,000 cars a day – if the tollbooths were removed. But he noted that it won't be a quick fix. The entire length of the mainline I-90 would have to be fitted with gantries and cameras before cashless tolling could move forward.

No date for tollbooth removal

What is still a dream for Thruway users is about to become a reality for people who traverse Grand Island.

Dougherty said there is no specific date to remove the existing Grand Island tollbooths, but they are expected to be removed shortly after the Thruway Authority goes live with the cashless tolling system. A $2.2 million contract has been awarded to Union Concrete of West Seneca for the demolition and decommission of the tollbooths, he said.

The plan to install cashless tolling on Grand Island was announced by the governor in August and work began in October following a grassroots lobbying effort.

Brian R. Michel, a commuter-turned-activist who lives in Lewiston, got 7,500 signatures in his "WNY for Grand Island Toll Barrier Removal" campaign last year. He was in the front seat when Cuomo came to Grand Island to announce the tollbooths were coming down. He said he happened to be driving down the I-190 on Tuesday night as the cranes put the gantry into place.

"Nate (McMurray) and I are already making plans to be in the first carload to officially pass through those tolls," Michel said.

Michel said he's looking forward to not getting stuck in traffic jams as often, but he cautioned that the issues specific to the commute across the island will not automatically disappear.

"It's not going to be perfect, but at least it's something," he said. "It's a step in the right direction."

Not all residents see cashless tolling as a panacea. Grand Island realtor Vienna Haak said even after the tollbooths disappear, there still will be bottlenecks for motorists crossing the bridges. And there is still the issue of residents having to pay to return home whenever they leave the island.

"I don't see any financial benefit to Grand Island," Haak said. "I just see it as we are making it easier for the state."

"As a real estate agent this is definitely a topic of conversation," Haak said. "Buyers will ask, 'How are the bridges getting off the Island?' "

Haak said she can't promise clients they will be able to get where they need to go in a timely manner each morning.

But the new system will at least promise one sure thing: no more waiting in a line of cars to pay a toll.

"It will limit congestion, it's better for the environment and it's safer," said Dougherty. "We expect (fewer) accidents because there won't be any tollbooths."

The Thruway Authority continues to urge drivers to apply for the E-ZPass tag, which is offering a $10 credit through Monday. Commuters and residents are eligible for discounts, which can save drivers hundreds of dollars each year. Drivers without an E-ZPass will have their license plates read by cameras on the gantries and will be issued a monthly bill by mail.

Never far from the question of Grand Island tolls is the issue of paying them at all. The tolls were supposed to disappear by the time the bridges were paid for, but that never happened. The Thruway Authority has reported to The Buffalo News that it takes in $23 million in tolls each year. McMurray said he and other election officials have a lot of questions about where that money goes.

"Those are conversations we need to have," said McMurray. "But this is progress."

Workers are installing a gantry that will hold equipment for a cashless toll collection system on the I-190 at the South Grand Island Bridge, Wednesday, Feb. 21, 2018. (Derek Gee/Buffalo News)

A tractor trailor passes beneath a gantry that will hold equipment for a cashless toll collection system on the I-190 South at the North Grand Island Bridge. (Derek Gee/Buffalo News)