ROSEDALE, Md. – Rain pouring down all around him, Tom Perez bounded from townhouse to townhouse in this working-class Baltimore suburb that he likened to Lackawanna, and he did so armed with a sales pitch: that he was the "get stuff done" Democrat who would be the best next governor of his adopted home state.

His ever-so-slight Buffalo accent and much-advertised passion for the Bills not withstanding, Perez – a Snyder native who's lived in Montgomery County, Md., for decades – received warm greetings from the people he met here in Ravens country on a dreary Saturday earlier this month. And an older couple that answered one of his door knocks seemed especially engaged in what he had to say.

"Tell your friends to vote," he told them, beaming. "We want to make sure we restore great schools ... and safety and jobs and sanity."

"Sanity! That's what we need!" replied the woman at the door.

So it goes on the campaign trail with Perez, a live-wire campaigner with a loaded resume who, at age 60, is waging a spirited race for the highest office he has ever sought. He is one of three leading candidates in a 10-person field for the Democratic primary to replace a popular term-limited Republican incumbent, Gov. Larry Hogan, in one of the nation's bluest states.

The primary is Tuesday, and the polls and pundits say one of three Democrats is likely to win:

Perez, not surprisingly, said he's the best choice. Over sandwiches at a bar and grill blocks from where he was campaigning, he said his depth and breadth of experience set him apart.

"I always talk about how I'm part of the GSD wing of the Democratic Party," he said. "I get stuff done."

He is by no means alone in thinking that. Perez's track record prompted both the Baltimore Sun and the Washington Post to endorse him.

Perez "is by far the most qualified and battle-tested of the candidates," the Sun wrote.

The Post, meanwhile, lauded Perez for bolstering protections for immigrants and the LGBTQ community, as well as for cracking down on police brutality while serving at the Justice Department.

"None of the candidates can match Mr. Perez’s track record or command of governing," the Post wrote. "Few candidates in Maryland’s history, or the country’s, would enter a governor’s office so well prepared."

To hear Perez tell it, he is now prepared to bring big change to Maryland. Saying the state "punches under its weight" in many ways, he has offered a detailed platform that aims to make the state a green-energy leader while preparing for the ravages that climate change might wreak on the Chesapeake Bay and Atlantic Ocean coastlines.

"I'm running for governor because I think there's a tremendous set of opportunities here to help people, to help create good jobs, to build a clean energy economy," he said. "We lost manufacturing here just like in Buffalo, and we have an opportunity to replace those good union jobs with the union clean energy jobs. ... And when you have 3,100 miles of coastline, you're on the frontlines of climate change. And you know, we have to address that."

If he were to win both Tuesday's primary and the November election, Perez would take the helm of what is, on paper, the nation's wealthiest state – but one with a troubled city at its core. Baltimore's homicide rate was the nation's second highest in 2019, and the number of killings there has fallen only slightly in more recent years.

Perez aims to counter that trend by working with all levels of government, including his longtime contacts in the Justice Department. In addition, he was the first candidate to sign a memorandum of understanding with African-American faith leaders in the city calling for greater state investment in their community.

"There's too many people who are not benefiting from the aggregate prosperity that exists here," Perez said.

Perez's message seems to be resonating. Eight points behind Franchot in an early June Baltimore Sun poll, Perez was only two points behind two weeks later in a Goucher College poll conducted in partnership with the Baltimore Banner and WYPR public radio.

Perez's promise to "get stuff done" appeals to a wide swath of Democratic voters from progressives to those more in the middle, said Mileah Kromer, director of the Sarah T. Hughes Center for Politics at Goucher College. And as a former U.S. and state labor secretary who touts that he worked on a garbage truck in Buffalo to pay for college, Perez has won the vast majority of labor endorsements throughout the state.

"The unions are huge here," Kromer said. "The union folks get door-knockers out, boots on the ground. So it's no wonder that he's been climbing."

But Franchot and Moore have huge assets in the race that Perez doesn't have. Having won four statewide races, Franchot has unmatched name recognition. And Moore is a charismatic African American from Baltimore with an endorsement from a longtime friend named Oprah Winfrey.

What's more, no one will know the winner on primary night. Under state law, absentee ballots can't be counted until the Thursday after the primary. And that Lewis said that count will take a while, which is why the party didn't schedule a kickoff rally with its new gubernatorial nominee until Aug. 1.

Republicans, meanwhile, have a neck-and-neck primary of their own between Dan Cox, a conservative state legislator endorsed by former President Donald Trump, and state Commerce Secretary Kelly Schulz, a moderate allied with Hogan.

For now, though, Perez is focusing on winning his own primary – which is why he effusively thanked the couple dozen door-knockers who joined him in the pouring rain just east of Baltimore.

"I think when you knock on a door on a crappy day like today, people really appreciate that because they see you must have a passion for that candidate," he told them, adding: "This is what we call a typical day where I grew up."

In this pre-primary phase of the 2020 presidential election, Tom Perez is serving as the national face of the Democratic 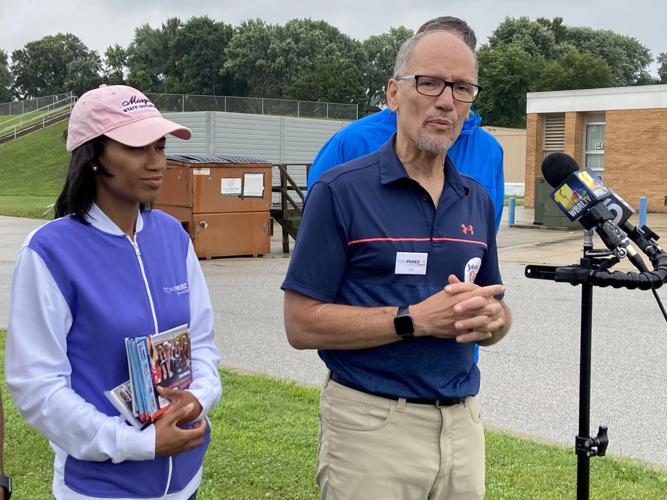 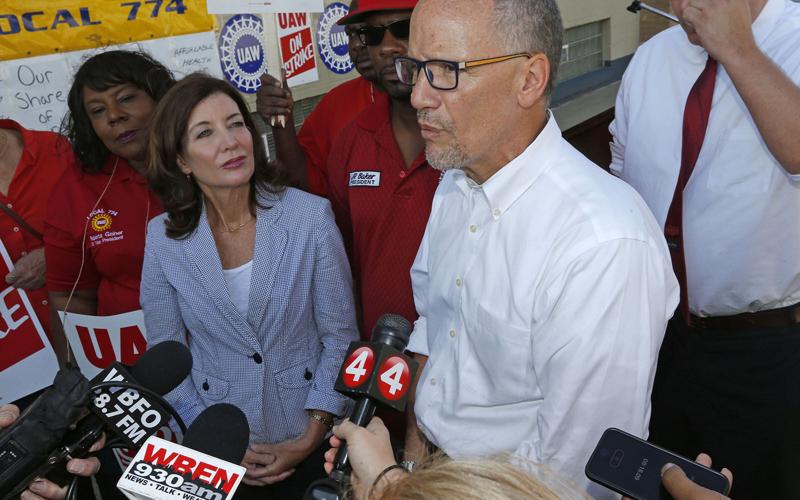 Tom Perez, who was then president of the Democratic National Committee, and then-Lt. Gov. Kathy Hochul in Tonawanda in September 2019.