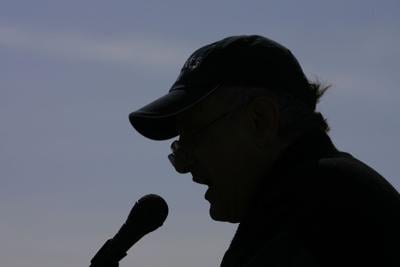 For more than a decade, Carl P. Paladino has dwelt in the highest echelons of New York Republican politics, despite his long penchant for sparking controversy.

Racist emails surfaced during his 2010 campaign for governor. Later he insulted first lady Michelle Obama with racist comments. And even this year, as he challenges Nicholas A. Langworthy in Tuesday's primary election for the 23rd Congressional District, Paladino continues to attract attention. He shared a Facebook post linking mass killings in Buffalo and Texas to "false flag" ideas, called Adolf Hitler an "inspirational" leader, and last weekend told a Breitbart Radio host – "facetiously" he later said – that U.S. Attorney General Merrick Garland "probably should be executed."

Now Paladino not only soldiers on, but possibly approaches the top of his political game. At 75, the veteran Buffalo real estate developer is favored by many political observers in the seven-county district after years of grabbing headlines and rallying conservative voters. His "Carl Country" campaign signs dot the sprawling district from Orchard Park to Elmira, and the approximately $2 million he has personally injected into his effort makers him a ubiquitous presence on television and radio.

Langworthy, the state Republican chairman who at 41 has already logged two decades of behind-the-scenes experience, may be attracting support from established politicians and party committees. But Paladino aims at the grassroots voter, and that has not escaped the attention of former Westchester County Executive Rob Astorino – one of the few top GOP figures to back him over the endorsed Langworthy.

"I just think Carl is the right candidate at the right time in a country that desperately needs to be fixed," said Astorino, the 2014 GOP candidate for governor who also ran in this year's gubernatorial primary. "His voice is exactly right for this time. He doesn't back down."

Paladino would not consent to an interview for this story. But he has waged a fairly public campaign via news conferences and social media that emphasizes his conservative values and, most of all, his devotion to Donald Trump. Indeed, Paladino's connection to the former president dates back almost a decade, when he and former ally Langworthy joined others in an unsuccessful effort to persuade Trump to run for governor of New York.

In recent months, both candidates have tried to "out-Trump" the other by emphasizing their ties to the former president, though neither gained a formal endorsement. Nevertheless, Paladino tweeted a clip of Trump singling him out at a summer event in Westchester County, attempting to connect with the presidential candidate who claimed the new 23rd District by 20 points in 2020.

"I love Carl," Trump says in Paladino's Twitter clip of the Westchester affair. "Carl and I have been friends for a long time."

The candidate has been quick to invoke Trump on Twitter any way he can.

"President Trump and I have been good friends for a long-time," Paladino tweeted earlier this month. "I’m happy to hear he feels the same way about me."

"Liz Cheney lost last night, she abandoned Republican voters and colluded with Never Trumpers and Democrats," he said. "My opponent is funded by the same people who helped pro-impeachment star Liz Cheney."

As chairman of the New York GOP, Langworthy has on an almost daily basis trumpeted new endorsements from state and county legislators, party leaders, town supervisors and Council members. Paladino has not matched that intensity, but has gained support from national figures with close ties to Trump like Reps. Elise Stefanik of Saratoga County and Matt Gaetz of Florida.

A member of top Republican leadership in the House, Stefanik did not consent to an interview but late Friday issued a statement saying "voters in Western New York and the Southern Tier overwhelmingly support Carl Paladino."

"What the Left, the Establishment, and the media still don’t understand is that, just like with President Trump, the vicious attacks and smears with statements taken out of context actually energize people to support Carl because voters see right through it," she said. "He will be an effective Member of Congress who will be a conservative fighter, standing up for people who feel they haven’t had a strong voice for a very long time.”

Stefanik is headlining a get-out-the-vote telephone rally in support of Paladino on Monday night.

Paladino, meanwhile, has refused to debate his opponent and mostly deals with reporters at rare news conferences in which handlers allow three or four questions. He speaks mostly in generalities about his priorities should be win Tuesday and then again in November against Democrat Max Della Pia. He lists on his website typical Republican themes denouncing the Biden administration's approach to inflation, immigration and what he describes as "out of control" crime. He mimics Trump in denouncing the "Washington swamp," and notes he is self-funding his campaign "so nobody can say they have an 'in' with Carl Paladino."

The candidate displays some of his fiercest ire against a Washington super-PAC called American Liberty Action PAC that has spent nearly $1 million criticizing his record as a Buffalo real estate developer. He claims the PAC has "ties" to "never-Trumpers" like Sens. Mitch McConnell and Mitt Romney, and has challenged Langworthy – who has no connection to the PAC – to disavow the ad.

"He's supported by a super-PAC with a number of RINOs (Republicans in Name Only) like Mitch McConnell and Mitt Romney and others who don't quite get what the people want," he said at a recent news conference.

While a proud conservative, Paladino said at the same event he will act as his own man in Washington, eschewing conservative groups like the Freedom Caucus.

"That's not my way," he told reporters. "I don't have to belong to a group or identify myself with a certain issue or certain cause. But I'm not saying I don't have respect for that coalition."

Langworthy has hammered Paladino for failing to file a personal financial disclosure with the House clerk as required, especially after his own compliance. As recently as Monday, Paladino promised he would file the document before Tuesday's primary – though it had not appeared on the clerk's website by Friday.

Langworthy spokesman Christopher M. Grant Friday addressed the filing failure by referring to the pro-life advocate's ownership of a Niagara Falls Planned Parenthood facility. (Paladino said he was "stuck" with the Planned Parenthood lease when his firm bought the property.)

"If I were Carl Paladino, I would employ every trick in my arsenal to hide that I profit off abortion and who knows what else," he said. "He's clearly hiding what he's not disclosing."

Langworthy and Paladino have not shied away from mudslinging during the campaign that developed when Rep. Chris Jacobs suddenly decided not to seek re-election in June. Langworthy calls Paladino "Cowardly Carl." Paladino labels his opponent "Lying Langworthy" and a "swamp animal." The two were friends and allies just a few months ago.

Just about every observer of the race pegs it close. They cite Paladino's widespread name recognition and his financial advantage. Langworthy, however, is expected to fire up the county and town organizations throughout the district that drive voters to the polls, make last-minute phone calls and knock on doors. That could prove a key factor in an unprecedented August congressional election expected to draw as few as 25,000 Republicans.

Other questions surround Paladino's reputation for the outlandish remarks that keep on coming. Some wonder if his name recognition will eventually prove a negative. Allies like Astorino think his supporters still appreciate his approach.

"Carl obviously has a big mouth that has gotten him into trouble at times," he said. "But he's got a bigger heart, and exactly what we need to fix this mess."

Here's what you need to know about the races on the ballot in New York's second Primary Day. Polls will be open from 6 a.m. to 9 p.m. Tuesday,…

Today's faceoff between Republicans Nicholas A. Langworthy and Carl P. Paladino for the new 23rd Congressional District is not expected to result in long lines at the polls.

After two decades of managing elections for other Republicans, Nicholas A. Langworthy claimed victory of his own early this morning, even if by the narrowest of margins over Carl P. Paladino for the GOP nomination in the 23rd Congressional District.

"Yes, I did it," Congressional candidate Carl Paladino said. "I just didn't remember the fact that I published it; I couldn't remember."

'I should have used Churchill': Paladino again on defense after report unearths Hitler remarks

For the second time in a week, Republican congressional hopeful Carl P. Paladino is explaining controversial remarks unearthed by a media watchdog group, this time noting Adolf Hitler's ability as an "inspirational" leader.

On radio show, Paladino said Merrick Garland 'probably should be executed'; he later said he was being 'facetious'

Republican congressional candidate Carl Paladino said on a radio show last week that U.S. Attorney General Merrick Garland "probably should be executed." He later said he was "just being facetious."

Two militia leaders guilty of sedition in US Capitol assault