Subscribe for $1
Read Today's E-Edition
Share This
Kathy Hochul beat Lee Zeldin, but the race was the closest in a generation. Why?
0 Comments
Share this
Support this work for $1 a month
Robert J. McCarthy

NEW YORK – A check of enrollment statistics at the state Board of Elections reveals 6,021,708 voters enrolled as Democrats throughout New York, compared to 2,695,984 Republicans.

And for years, those numbers have provided a more than comfortable cushion for New York Democrats while explaining their dominance of state government.

But Gov. Kathy Hochul and her Democrats were nevertheless forced to slog it out Tuesday in the closest gubernatorial contest in a generation. While Hochul and her supporters basked in falling confetti and jubilation at her Manhattan headquarters as she was elected the state's first woman governor, questions still surround a victory of only 5 percentage points over Republican Lee Zeldin, who offered his congratulations to the victor Wednesday afternoon.

Why was it so difficult in uber-Democratic New York?

"From the get-go and from what we saw nationwide, Democrats had challenges," state Democratic Chairman Jay S. Jacobs said Wednesday. "It's always difficult at midterm elections after the first election of a president, and when there is 8% inflation and a high price for gas. Then you throw in crime, and you've got yourself a real steep hill to climb."

And the huge Democratic overlay never seemed to discourage Republicans, who scored major fundraising successes despite the registration challenge. Democrats acknowledge the GOP success, noting that Hochul successfully fended off nearly $20 million in outside spending for Zeldin, with cosmetics heir Ronald S. Lauder responsible for $11 million by himself through an independent expenditure committee he created.

Democratic sources point out that outside spending accounted for $17 million on TV during the campaign's final six weeks alone, compared to only $4.1 million of independent expenditure spending in 2018 and $2 million in 2014.

Jacobs now says his party recognized GOP gains early as Zeldin crafted an entire campaign on crime, even if he labels "unfair" the candidate's blame of reforms like cashless bail. But as Zeldin intensified his crime theme, enthusiasm for Hochul's early message favoring abortion rights waned. Jacobs said his Democrats were "caught between a rock and hard place," because connecting voters to the governor's own crime efforts might prove difficult "through all the noise."

"That would only anger voters, we felt," Jacobs said, adding that the pro-Zeldin headlines of New York City tabloids complicated any crime "pivot" on her part.

"The fear was that the argument would have been stronger than the cure argument," he added, especially as the tabloid headlines screamed about subway crime when he contends such incidents have fallen to pre-pandemic levels.

Here are five things to know about the Hochul-Zeldin race as political observers and journalists dive into voting data in the surprisingly close contest in deep-blue New York.

Then Zeldin capitalized on a shooting that took place right on his Suffolk County front lawn as his daughters were inside.

"He was able to politicize that in an ad that pointed to everything about crime except that which he would not deal with – guns," Jacobs said. "Republicans are very good at finding something to use as a weapon to blame Democrats, but never having a solution."

GOP strategists, meanwhile, may be more cognizant of the 3.2 million Democratic registration advantage than anyone. State Chairman Nicholas A. Langworthy, who on Tuesday was elected to a seat in Congress from the 23rd District, said Zeldin proved the right candidate at the right time with the right message. He noted that the Long Island congressman worked tirelessly for 19 months on the campaign and came closer than anyone ever expected.

"If you had told me two years ago that a Republican running for governor would have come this close I would have laughed in your face," Langworthy said Wednesday.

But while Zeldin claimed troves of votes from his native Long Island and scored decently upstate, he could not crack through the Democratic monoliths of Brooklyn and Manhattan. And he failed despite scoring about 30% in New York City, considered the magic threshold for any statewide Republican since Gov. George E. Pataki last recorded similar totals back in 2002.

"The Democrats did a really good job of turning out the ultra-liberal vote in Manhattan and Brooklyn, and that's tough to overcome," the chairman said, adding that loss of upstate voters through population decline no longer supplies the votes from outside New York City that Pataki enjoyed a generation ago.

Can the GOP ever hope to compete in New York when a year chock full of advantages, lots of money and a good candidate failed?

"It's quite a mountain to climb, and I'll never say never in politics," Langworthy said, pointing to the governor's own $50 million fundraising record, Democratic numbers, all the advantages of incumbency, and still only a 5 percentage point victory.

"I'm confident we had the best candidate, who had the right amount of money, the right geography, a united party and the right message," he said. "Lee Zeldin hit every one of those parts."

Analysis: For Republican Lee Zeldin, closer but still too far

Now you have to wonder if any serious Republican will angle for the post again, as they ask: “If Zeldin couldn’t do it, who can?”

The Editorial Board: Will Republicans learn after falling short again?

Even in a year when they had everything going for them – or at least, when they thought they did – New York Republicans were once again shut o…

The Editorial Board: With Lee Zeldin as leader, New York’s GOP would continue to walk in the wilderness

As former Gov. George Pataki observed last week, with Zeldin’s servile support of Donald Trump, he threw away the party’s best chance in 20 years to win any statewide post.

Minutes after the polls close, Nick Langworthy says he won a seat in Congress

Less than 20 minutes after the polls closed Tuesday, Republican Nicholas A. Langworthy claimed victory in his race for Congress in a heavily Republican Southern Tier district.

Although she won just 13 of 62 counties, Kathy Hochul's margin of victory in the New York City boroughs and the upstate counties with big citi…

With history-making win, Hochul vows to break barriers out of 'strength and passion'

Amid the din of her delirious campaign headquarters, Kathy Hochul of Buffalo found herself accepting not only the cheers of victorious Democrats late Tuesday but also stepping into history as the first woman ever elected governor of New York.

"This race was a once-in-a-generation campaign, and with a very close margin in the bluest of states," Zeldin said via a statement posted on Twitter. 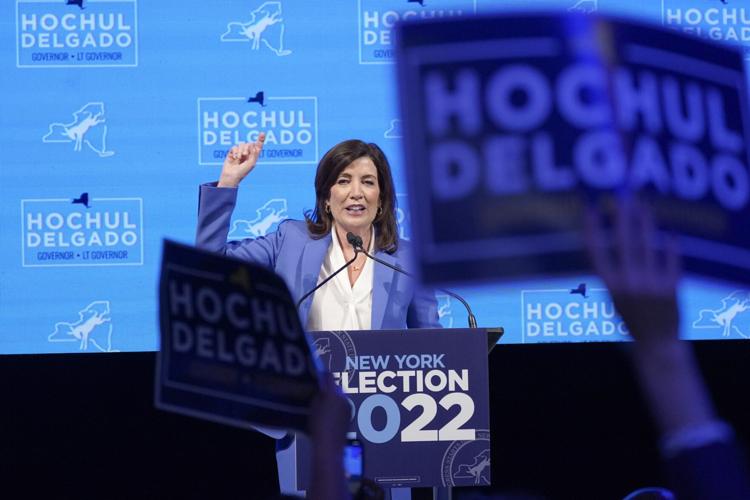 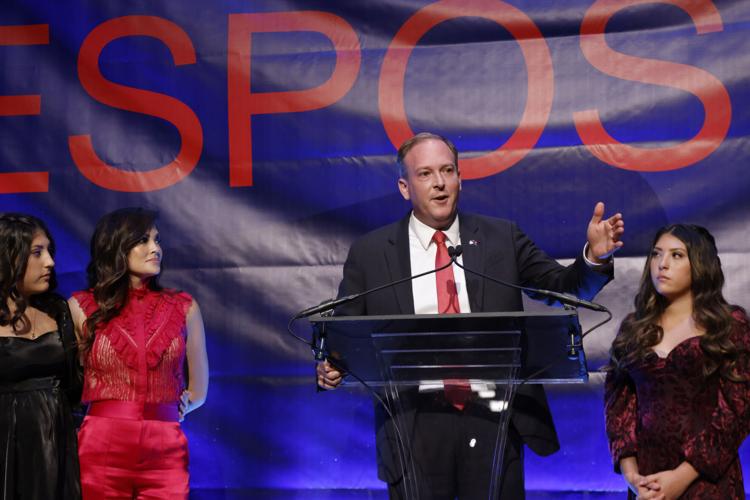 A strong gubernatorial campaign from Lee Zeldin was one reason Republicans fared well in congressional races in New York. But a court decision from earlier this year played a bigger role.