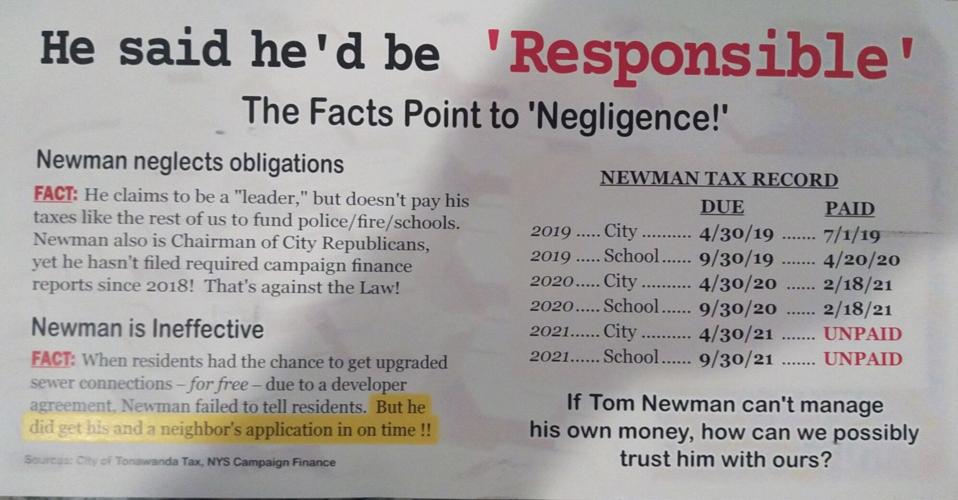 One side of the campaign mailer sent out by the Erie County Democratic Committee on behalf of City of Tonawanda Democrats attacking then-1st Ward Councilman Tom Newman last fall. 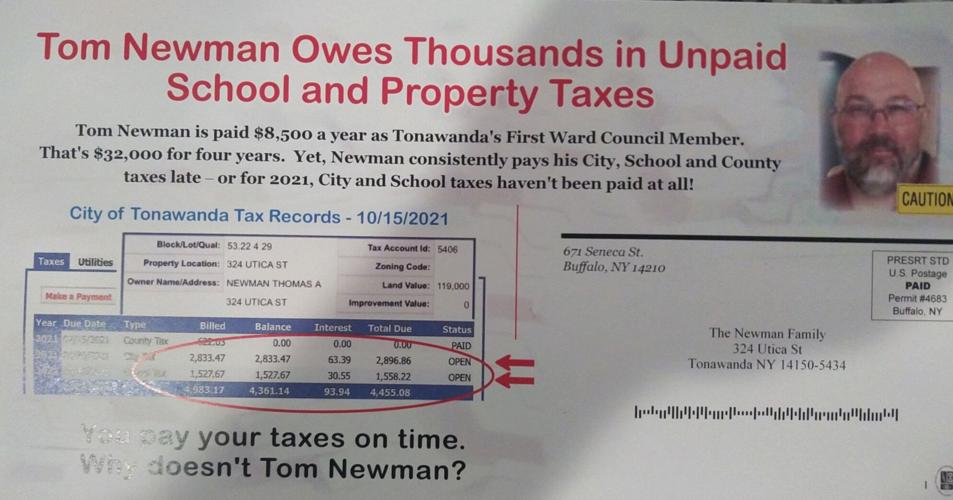 The other side of the Newman mailer. Note that it has the return address of the Erie County Democratic Committee but does not have a "Paid for by" disclosure required under state election law.

The probe stemmed from an October 2021 complaint over a mailing that accused Thomas Newman, then a Tonawanda Common Council member, of failing to pay his property taxes on time and of benefiting from his elected office. Newman, also the city Republican chairman, won re-election but died less than two months later.

The anti-Newman mailer did not have the "Paid for by" attribution required under state election law and a later investigation determined more than 100 political mailers and other items produced by Democrats throughout Erie County in 2021 and 2022 lacked this necessary disclosure.

"I think they owe the City of Tonawanda and especially the Newman family an apology," said Ron Walker, the current city GOP chairman.

Tonawanda and Erie County Democrats say they have no reason to apologize because the claims made against Newman in the flyer were factual.

They said no one was attempting to hide who was behind the mailers and they described the mistakes investigated by the state as minor violations of election law that occur in Democratic and Republican campaigns alike.

"It wasn't sent anonymously," said Gayle Syposs, City of Tonawanda Democratic chairwoman. "And it was a bit of a hard-hitting piece. But there wasn't anything on it that wasn't accurate."

The state Board of Elections began its investigation after receiving a complaint Oct. 21, 2021, concerning a piece of direct mail sent that fall to voters in the City of Tonawanda's 1st Ward, which Newman represented.

The mailer said Newman failed to file required campaign finance reports; owed thousands of dollars in unpaid city and school district property taxes; and relied on insider information to get a free, upgraded sewer connection to his home.

"If Tom Newman can't manage his own money how can we possibly trust him with ours?" the mailer read in part, according to a copy provided to The Buffalo News.

Newman, who first won a seat on the Tonawanda Common Council in 2018, claimed victory in his re-election race in November 2021 but died from complications of Covid-19 on Dec. 17.

Council President Jenna Koch broke ranks with the Democratic Party to support Monica Ljiljanich, a Republican, for the seat vacated after the death of Thomas A. Newman.

Walker said he knows candidates have to expect rough treatment from their political opponents. But he decried the mailer as a personal attack and deeply upsetting at the time to Newman and his family.

"They were distraught. They – I mean, Kerrie was in tears," Walker said, referring to Newman's wife. He said the Newmans, like other families, have gone through tough financial periods.

Democrats say the issues raised in the mailer were fair game and were drawn from publicly available records.

Syposs said the party didn't try to hide the fact that it had produced the mailer.

The mailer had a return address of 671 Seneca St., Buffalo, but it did not clearly state that's where the Erie County Democratic Committee has its headquarters. It also had the bulk-mail permit number for the county party but did not otherwise disclose who paid for it.

Syposs said Tonawanda Democrats rely on the county party to arrange for the printing of the mailer. It was an oversight, she said, that the mailer didn't explicitly say "Paid for by" city or county Democrats.

"To be honest with you I just never paid any attention to anything other than the piece itself," she said.

The state Board of Elections investigation expanded to a review of 280 pieces of campaign materials distributed by the county Democratic Committee throughout Erie County during the 2021 campaign.

The board found only one had the required "Paid for by the Erie County Democratic Committee" disclosure, based on images uploaded to the board's website as mandated under election law.

Of the rest, 110 had "Paid for by the New York State Democratic Committee"; 21 had "Printed in-house at the Erie County Democratic Committee" or "at ECDC"; 45 were attributed to various candidate or local political committees; and 103 were not attributed at all, according to a determination filed Oct. 25 by Michael L. Johnson, the state board's chief enforcement counsel.

The county committee's attorney, Brittany Lee Penberthy, argued the uploaded images might not represent the actual versions mailed out to voters. The state also was required to prove the committee "knowingly" violated the law instead of acting carelessly or without fully understanding the law.

For those and other reasons, Johnson wrote, the state and the committee negotiated a $10,000 civil fine as part of a settlement covering materials distributed through the early part of 2022.

"Basically, it was a hit piece and they didn't want to take ownership of it. And they knew – they knew what it was," Walker said of the anti-Newman mailer.

Erie County Democratic Chairman Jeremy Zellner said the county committee regularly arranges for printing and distribution of mailers for town and city level Democratic committees. He said the disclosures on the mailers failed to comply with the state's recently revised election law but insisted these were technical mistakes.

"We just didn't want to continue arguing and paying legal fees and dealing with this," Zellner said. "So we just came up with an amicable agreement, which specifically says that there was no wrongdoing here."

Zellner said Republican candidates and committees also failed to include similar disclosures on campaign literature in the 2021 election, based on his review of mailers and other items the GOP provided to the state Elections Board.

Zellner said he expects complaints will be filed with the state regarding those alleged violations soon. And he's accused Walker of misrepresenting the facts of the investigation and the settlement.

Walker in a news release referred to the anti-Newman mailer as "disingenuous" and "a slanderous attempt to ruin a man's character."

Zellner said this statement was an attempt to distract from both the facts of the mailer and from Walker's habit of sharing "extremist" memes on City of Tonawanda Republican Committee's Facebook page.

"They have to get their store in order before they throw stones here," Zellner said.

The City of Tonawanda Republican chairman who regularly shared Facebook memes that appeared sexist, antisemitic, homophobic or demeaning to pe…

Widow of Tonawanda councilman no longer seeks to replace him

Kerrie Newman had expressed interest in replacing her late husband Thomas A. Newman, who had served as the council's 1st Ward representative a…

Thomas A. Newman, who represented the Council's 1st Ward neighborhood where he had lived nearly all of his life, died Friday from complication…

With the mayor's job and four Common Council seats up for election this fall, Republicans are gleefully highlighting the Democratic infighting…

Tonawanda Mayor Rick Davis survived an ethics probe. Can he withstand a challenge from his own party?

Republicans say with Davis and four Common Council members up for re-election, the Democratic infighting and Davis' polarizing behavior give t…

The state Board of Elections investigated a complaint about a campaign mailer that lacked the required "Paid for by" disclosure. The Erie Coun…

Why snail skin therapy is the new facial trend

One side of the campaign mailer sent out by the Erie County Democratic Committee on behalf of City of Tonawanda Democrats attacking then-1st Ward Councilman Tom Newman last fall.

The other side of the Newman mailer. Note that it has the return address of the Erie County Democratic Committee but does not have a "Paid for by" disclosure required under state election law.