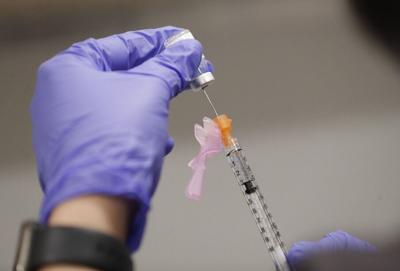 The state Health Department has declined to disclose if any nursing homes had to activate emergency plans due to staffing shortages related to the Covid-19 vaccination mandate for their workers.

At 12 nursing homes across the state more than 20% of workers had not received a Covid vaccination as of Wednesday, according to data the Health Department released Friday.

The state's vaccination mandate for health care workers required that they receive at least one Covid-19 shot by 12:01 a.m. Tuesday or they could not work. Nursing home industry officials feared the mandate might cause a staffing crisis at some already understaffed nursing homes.

As of Thursday, 97% of nursing home workers statewide have received at least one Covid vaccination shot, according to data provided to the Health Department by individual nursing homes. That is much higher than it was a week earlier, on Sept. 20, when 82% of workers had at least one shot.

But the Health Department declined late Thursday to tell The Buffalo News if any nursing homes had to activate an emergency plan due to staffing problems related to the mandate.

“The Department of Health is closely monitoring the situation through the DOH Operations Center which will continue to work with facilities to make certain patients are receiving necessary care and that community health needs are being addressed. So as not to discourage facilities from reaching out for assistance, for now, the department is treating these individual facility requests as confidential," Health Department spokesman Jeffrey Hammond wrote.

The Health Department declined to further explain why the information should be kept from the public.

Gov. Kathy Hochul has previously pledged to make the Health Department more transparent. Despite that pledge, Hochul's administration has faced calls from a coalition of advocacy and open government groups to release more state data related to Covid-19.

Schofield Residence in the Town of Tonawanda was identified in the Health Department data as having more than 20% of its staff still unvaccinated as of Wednesday.

The state Health Department said 32% of the Schofield workers were not vaccinated, although an administrator there said that statistic is wrong. Actually, 88% of the 188 workers at Schofield had at least one Covid shot as of Wednesday, said Olivia Rozycki, the administrator, who said the nursing home provided the state with wrong numbers.

The nursing home did put unvaccinated workers on leave for 30 days on Sept. 27, Rozycki said. "I think people were waiting until the last minute to see what happened," she said of those workers.

Schofield Residence has hired vaccinated workers from outside employment agencies, and Rozycki said the nursing home is providing good care to its residents without having to activate its pandemic emergency plan.

Richard Mollet, director of the Long-term Community Care Coalition, a nonprofit based in New York City, said he has not heard of any staffing crises at nursing homes this week due to the vaccination mandate.

"What I've generally been hearing is the vaccination rates are going up. I haven't heard anything terrible, which is good," Mollot said. "But in the last few months we've seen a real degradation of care across the board. We're seeing great increases in reports of bad things happening due to a lack of staff. Not because of the vaccine mandate per se."

Improving numbers at some facilities

Some Western New York nursing homes that had worker vaccination rates among the lowest in the state showed marked improvement this week.

Comprehensive Rehabilitation and Nursing Center in Williamsville had 48% of its staff vaccinated on Saturday, Sept. 25, according to the Health Department data. By Wednesday, the nursing home told the state 97% of its staff was vaccinated.

The union 1199SEIU, which represents health care workers at the facility, negotiated an agreement in mid-September that required Comprehensive Rehabilitation to provide vaccination education sessions and Covid-19 vaccinations to workers during work hours. The deal also gave a one-time bonus to all 1199SEIU members who worked scheduled shifts during October, said April Ezzell, a spokeswoman for the union.

The agreement allowed Comprehensive Rehabilitation to put unvaccinated workers on unpaid leave for 30 days, but guaranteed the workers would be reinstated without loss of wages or benefits if they became vaccinated during that time.

Ellicott Center for Rehabilitation and Nursing in Buffalo went from 60% vaccinated on Sept. 25 to 98% on Wednesday, according to data it provided to the Health Department.

Management at Ellicott Center has strongly encouraged its workers to get the Covid shot since January, spokesman Jeffrey Jacomowitz said. He said the facility has also hired vaccinated nurses through employment agencies to prevent staffing shortages.

Vaccine outreach easier 'when it's somebody that they can relate to'

In Erie County, 65.9% of the population has at least one dose of the vaccine, according to data from the state Department of Health.

As the case has wound its way up through the courts, several of Western New York's largest health care providers put workers claiming a religious exemption on leave pending a final ruling.

Unlike hospital and nursing home workers, employees in those facilities have been able to bypass the vaccination requirement with a weekly test.

A jab or a job? For these health care workers, the answer is life-changing

Whether it's for religious reasons, fears about long-term effects or because they believe it infringes on their freedom, some health care workers have decided to leave their careers rather than get a shot.

Nursing homes with most unvaccinated workers among WNY's worst-rated

Staffing shortages at nursing homes may worsen with vaccine mandate