In his mayoral runs before, Mayor Byron Brown could always look to the Masten District as a stronghold. He captured 69% of the vote against two well-known rivals in the Democratic primary four years ago.

But the mayor didn't run up the score in Masten in the June primary, winning 55% to 41%, a factor in his surprising primary loss to democratic socialist candidate India Walton.

So three weeks from Election Day, as he runs as a write-in candidate, can Brown count on the Masten District to supply enough votes to overcome narrower margins elsewhere in the city?

A stretch of Deerfield Avenue, in the district where he once served as Common Council member, offers a clue he might not have a lock on Masten voters like in years past. Seven lawn signs for Brown can be seen on the stretch between East Delavan and Pembroke avenues. There are six signs for Walton.

“It’s good to have change,” said Dashaun Baldwin, 33, who lives and works in Masten.

She voted for Walton in the June primary, and she will again Nov. 2. She likes the idea of a woman in the city’s top leadership position.

“To be able to get that type of input and points of view from a woman’s perspective would be a different type of change that our city has never experienced before," she said.

Ricky McHerrin, a man in his 50s who lives and attends church in Masten, sees the matchup differently.

“I don’t want nobody new to come in that wouldn’t do what Byron has done,” said McHerrin, as he worked at a hot dog stand on Fillmore Avenue.

Brown has been mayor for a long time, but that isn't a negative, McHerrin said of the four-term incumbent.

Community leaders say Brown still has support in Masten for the Nov. 2 election. But Walton has picked up support here, too, and holding down his vote totals in Masten could be pivotal to her chances.

The Masten District extends from Main Street to as far east as Bailey Avenue, and extends generally from East Amherst Street to as far south as Best Street, encompassing all or parts of the Hamlin Park, Delavan Grider, Fillmore-Leroy, Kensington Bailey, Genesee-Moselle and MLK Park neighborhoods.

Brown’s margin of victory in the June primary in Masten was smaller than expected because many residents didn't realize the primary was happening, said Samuel L. Radford III, director of Community Action Organization Masten Resource Center on Fillmore Avenue. There were no cues for people, such as campaign mailings and lawn signs, he said.

But Brown seems to have turned it around in Masten, he said.

“I think that we probably saw lower-than-average turnout, and just listening to people, they said they didn’t hear from the mayor in the primary, and now you hear the exact opposite," Radford said. "People know that the mayor’s running.”

"She's speaking to a base of women in Masten that are between the ages of 18 and 35," he said.

Sophia Jackson, who runs a beauty shop on Bailey Avenue near Northland Avenue, said some of her clients "like that a Black woman is running" and will vote for Walton because they want a change.

Baldwin said she believes in Walton. She likes Brown, too.

“I appreciate everything he has done, but at the same time I’m open to India,” said Baldwin, who acknowledges Walton’s lack of political experience worries some voters.

“A lot of people are always worried about experience, experience," she said.

But “we never get the opportunity to be the change that we want to be if we always keep just holding on and feeling like you have to have this crazy big track record," she said. "I think that it’s a lot of moments that people can teach, and they can grow, and they can learn in the same way that Byron got that experience to be where he’s at.”

“Time for a change,” said Calvin Greene, 37. “Fresh blood. Gotta bring somebody new in. At least that’s my opinion.”

Jackson said many of her customers are older women “who are into the politics.” A lot of them are not satisfied with Walton’s experience, and they are going to vote for Brown, Jackson said.

“There are a lot older people saying they’re voting for Brown because she doesn’t know enough” about government, Jackson said.

And they are concerned that if Walton wins, she will not be the one in charge.

“They think a lot of the downstate people who support her will be running things,” Jackson said.

“She doesn’t know as much as Byron does,” McHerrin said.

Radford said Brown still has a lot of support in Masten.

“I would say there is a small group of people who think change is not a bad thing, but there’s no question there’s overwhelming support for the mayor,” Radford said.

Radford said folks who use the center – which offers programs in business development, computer literacy, organizing block clubs and neighborhood watch groups and youth services – believe the person in the mayor’s seat needs to have governmental experience.

“It should not be on-the-job training,” Radford said.

He believes more people will vote in the general election and that Brown will fare much better within the Black community in November – and not just in the Masten District. But he isn't sure Brown will win.

"I’m not sure you can blame that all on the mayor," he added. "But when you’ve been in there 16 years, you got to run on your record,” Badger said.

“I just hope whoever the next mayor is that there will be an intentional focus on the East Side of Buffalo, understanding that it can’t be a great city until all of its parts are elevated,” he said.

George Nicholas, pastor of Lincoln Memorial United Methodist Church on Masten Avenue, said not much has changed for certain neighborhoods.

The district includes six census tracts where the percentage of households below the poverty level ranges from 23% to 43%, with four of the census tracts above the city average of 27.5%, according to 2019 census estimates.

"It doesn’t surprise me that there would be some discontent and dissatisfaction with any leadership that’s been there,” Nicholas said.

“And it’s not just Bryon – but by state, federal, city government, and people are tired,” Nicholas said. “They’re tired of living in neighborhoods where there are a number of serious safety issues. They’re tired of sending their children to schools and not getting the kind of education that they deserve, and they when they go outside of their communities, when they go across Main Street and they see what’s happened at Hertel. They see what’s happening on Elmwood. When they go downtown and they see the Medical Campus and they see Canalside and all these things, and then people are saying, ‘What about us?’ “

Wingo, the Council member from Masten, said voters in his district will come out strong for Brown in November.

“We know that Masten is his stronghold," he said. "We’re going to hold him down in Masten because we just cannot accept the threat of a socialist being mayor of the City of Buffalo.”

The Editorial Board: About this election – Voting early, by absentee ballot or by writing in a name

The Nov. 2 general election represents what may be the most unusual slate of local contests in generations. 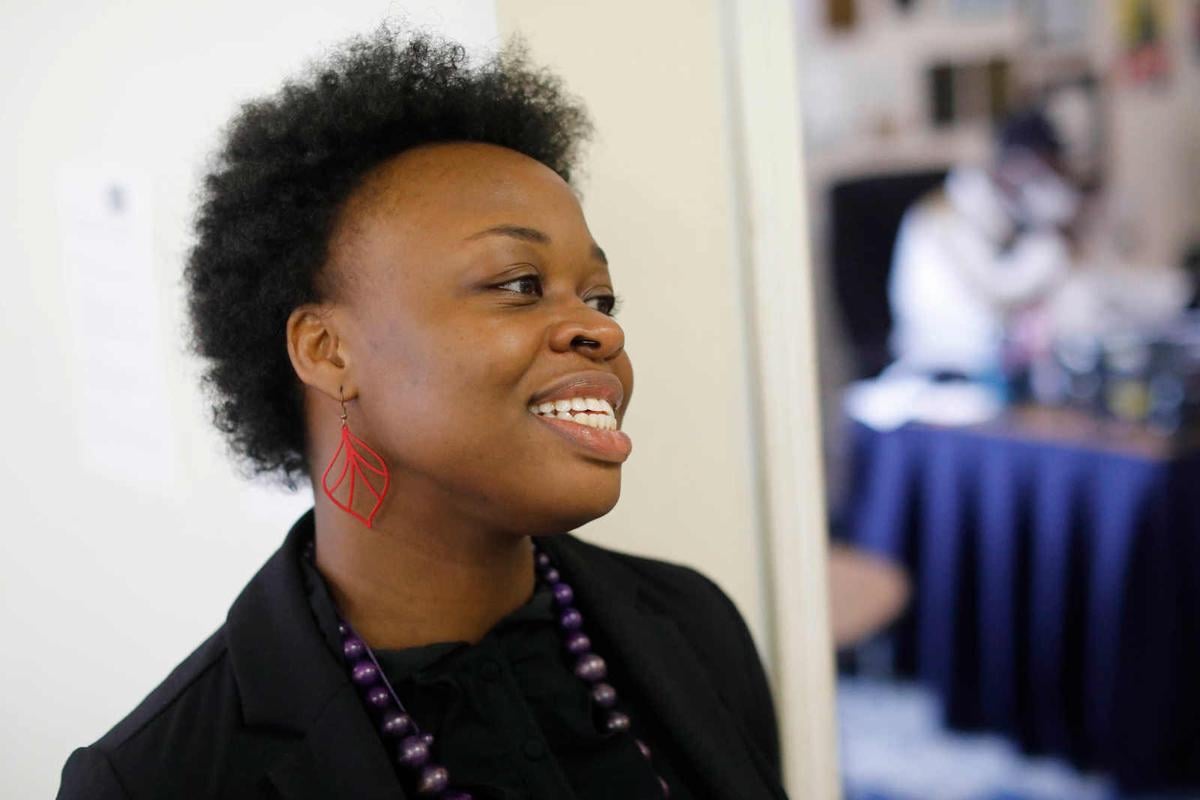 Dashaun Baldwin, a resident of the Masten District, shares her opinion on why she supports India Walton in the the Buffalo mayoral race, Friday, Oct. 8, 2021. 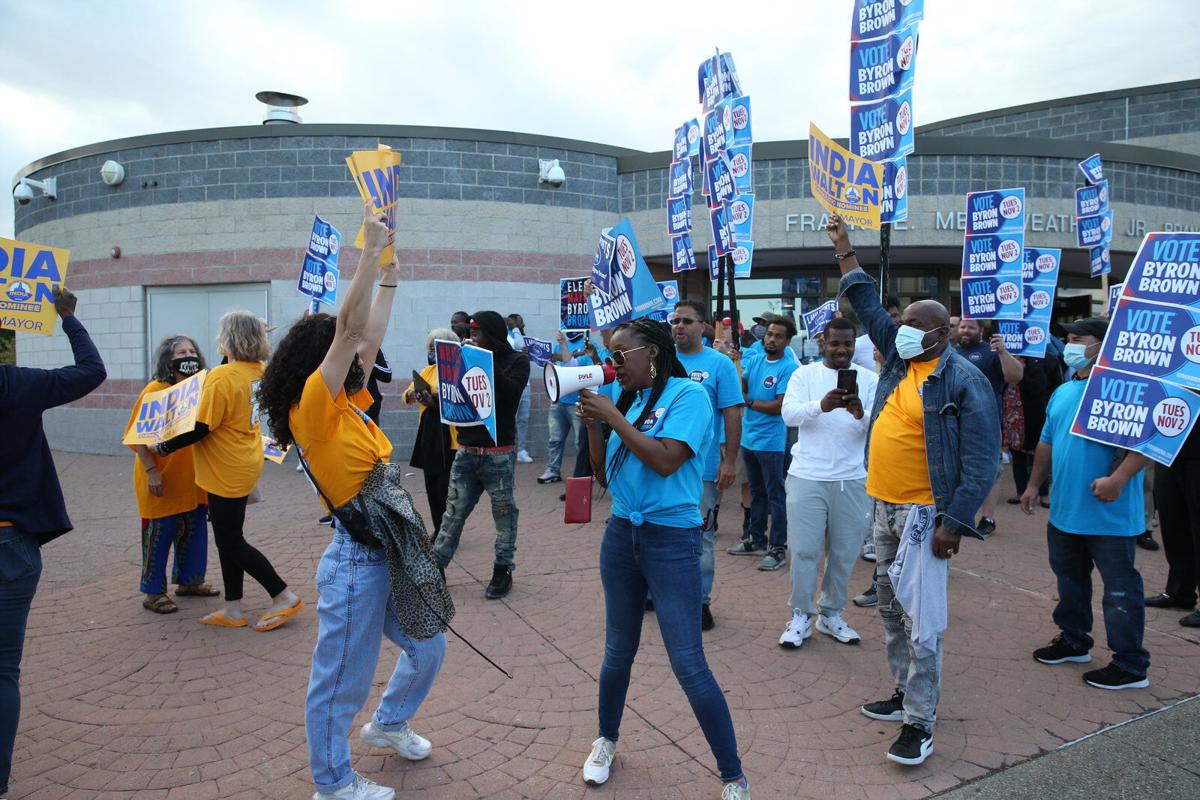 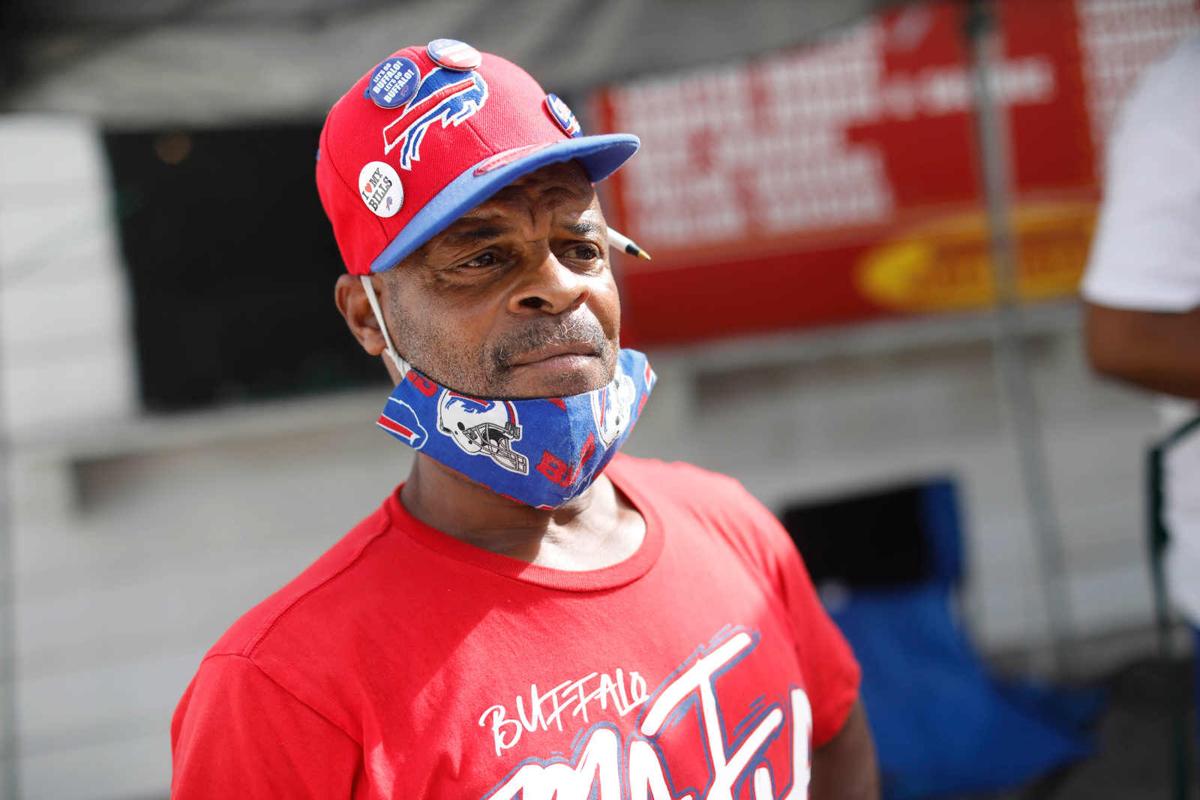 Ricky McHerrin, a resident of the Masten District, shares his opinion on why he supports Mayor Byron Brown in the the Buffalo mayoral race, Friday, Oct. 8, 2021.