Hochul's rise latest boost for women in politics, but it's 'a long game'
0 comments
Share this

And, depending on what happens on Election Day, women could again win the race for Erie County comptroller and – for the first time ever – Erie County sheriff and Buffalo mayor.

"There is a trail being blazed that clears the way for other women, especially women of color, to be bold," said India Walton, a democratic socialist whose surprising primary win over Mayor Byron Brown drew national attention.

Women candidates are riding waves of grassroots activism and pushing past outdated notions of the proper roles for men and women or what a leader should look like, politicians and political observers say.

These women bring with them life experiences, methods of governing and priorities for legislation that often differ from their male counterparts.

There still are vast gender gaps across many levels of government, including the all-male Buffalo Common Council. And women face obstacles such as sexist comments or, in the case of single mothers, making sure someone can watch their children while they knock on doors or raise campaign cash.

But, observers say, a century after women first won the right to vote in this country, they're making strides in running for and winning office today, a development sure to inspire more girls and young women to enter the political arena in the future.

"It seems it's just so serendipitous," Baskin said of the women's suffrage centennial and the "domino effect" that followed. "Kathy's ascension is on time."

The New York State Legislature ranks 18th in the country, with women making up 31.5% of its membership. Women hold eight – soon to be nine, when Hochul takes over – of the 50 governorships and nearly 27% of the 535 seats in Congress.

But despite obvious advances in a number of high-profile positions, the numbers remain well below women's 50.8% share of the American population. And the same is true in Western New York.

The five Erie County-wide elected positions are held by men. The three members of the House from this region are men, as is the case for Western New York's six state senators and nine of its 12 Assembly members.

And eight of 11 Erie County legislators are men, along with 21 of 25 town supervisors in the county.

"You're not going to change years and years of culture and belief system in an election cycle," said Karen L. King, executive director of the Erie County Commission on the Status of Women. "This is a long game."

Women have lagged behind men in seeking and winning elected office for numerous reasons, observers say, beginning with entrenched views about the appropriate roles for men and women in society.

For years, women were expected to run the family household and were unwelcome in many areas of the workplace and government – and the voting booth.

Even today, women candidates who are mothers must balance caring for their children, a task that still falls primarily on mothers and particularly on single mothers, with the time-consuming responsibilities of the campaign.

Women typically are less likely than men to consider themselves qualified to run for office, said Andrea Bozek, a Clarence-based political strategist who has worked for Republican candidates across the country.

The political establishment still is dominated by men, and it's harder for women to get access to needed campaign resources. And sexist attitudes still abound.

Bozek worked on a campaign for a woman in Utah, where a male consultant thought it would be a good idea to put her in a TV ad in a form-fitting running outfit. Focus groups asked, Bozek recalled, why is she running around dressed like that and why isn't she home with her children?

"You have to run a different campaign as a woman," said Bozek, who added she doesn't like the message sent when ads put women candidates in the kitchen.

Today, however, women are getting more structural support from the Democratic and Republican parties and independent political organizations.

Women office holders are mentoring younger women and, with some exceptions, societal attitudes about what leaders look and sound like are evolving.

Further, with more women working outside the home, they have a better sense of how what happens in Washington, D.C., or Albany can affect them, their families and their finances.

There are key moments that drive participation in government, experts said, such as the Clarence Thomas-Anita Hill hearings in 1991, Hillary Rodham Clinton's presidential run against Donald Trump in 2016 and, among women of color in particular, the Black Lives Matter protests in 2020.

This year, former Erie County Legislator Lynne Dixon, the first woman to run for Erie County executive when she unsuccessfully challenged Mark Poloncarz in 2019, is running with GOP backing for county comptroller.

"I would say both major parties seem to be making an active and concerted effort to encourage more women to run for office," Dixon said.

Kimberly Beaty, a longtime senior official with the Buffalo Police Department, in June won the Democratic primary for Erie County sheriff, an office held only by men. And Walton could make history this fall as Buffalo's first woman chief executive.

However, in their cases, both triumphed over male candidates endorsed by the Democratic establishment.

"We are tired," Walton said. "Working-class people in general are fed up with the status quo."

While it's impossible to generalize about all women, studies show they govern in a way that is more collegial and inclusive than men, experts said.

Businesses and corporate boards with more female representation act more ethically and are more profitable, research shows, and countries that have women leadership rank high on the lists of "happiest" nations.

In the political realm, women say their experiences as single or working mothers, balancing their household and professional responsibilities, lead them to focus on different issues than their male colleagues.

Baskin said her struggles as a single mother to find an apartment while on public assistance motivated her to push for a law, which had languished in the county Legislature, banning discrimination by landlords against tenants who receive government subsidies such as housing vouchers.

"That's the fight that was in me," she said.

Cheektowaga Supervisor Diane Benczkowski said she might have been more understanding than a male supervisor when town employees with young children said they needed flexibility to work from home during the Covid-19 pandemic.

The gender gap is more pronounced in certain elected jobs. Highway superintendents, for example, overwhelmingly are male while town clerks predominately are female.

And while women are making progress in the legislative sphere, fewer women have won executive offices such as mayor, town supervisor, county executive, governor or president.

"There's a lot of double standards," said Gwynn Thomas, chair of the University at Buffalo's Department of Global Gender and Sexuality Studies. "Those executive positions have been harder to crack."

Many women don't want to put their families through the rigors of a campaign. Also, women candidates and elected officials report they confront sexism on a too-frequent basis, around their age, their looks and their status as mothers.

But optimism abounds. In Albany, the "three men in a room" who historically have settled all important decisions – the governor, Assembly speaker and State Senate majority leader – soon will include two women. And Hochul is likely to face at least one serious woman challenger for re-election as governor.

"We always say, 'You have to see it to be it,' " said Sheri L. Scavone, executive director of the Western New York Women's Foundation. "Young girls, girls growing up, can now say, 'I can do that.' "

Correction: An earlier version of this article had an incorrect name for the Western New York Women's Foundation.

Liv Ennis, 6, of Genesee, and Kathy Hochul, lieutenant governor of New York give a bottle to a calf

Kathy Hochul checks out a llama.

Kathy Hochul talks with the Vitrano's.

Kathy Hochul and husband Bill play "I Got It".

Kathy Hochul and Richard Ball at the Fair

Kathy Hochul walk the Erie County Fair on a visit.

Hochul, the lieutenant governor and a Democrat from Buffalo, ascended to the chief executive role following the departure of Gov. Andrew M. Cuomo at midnight.

Engulfed by sexual harassment scandal, Cuomo resigns as governor of New York. Lt. Gov. Kathy Hochul of Buffalo will be the next governor. 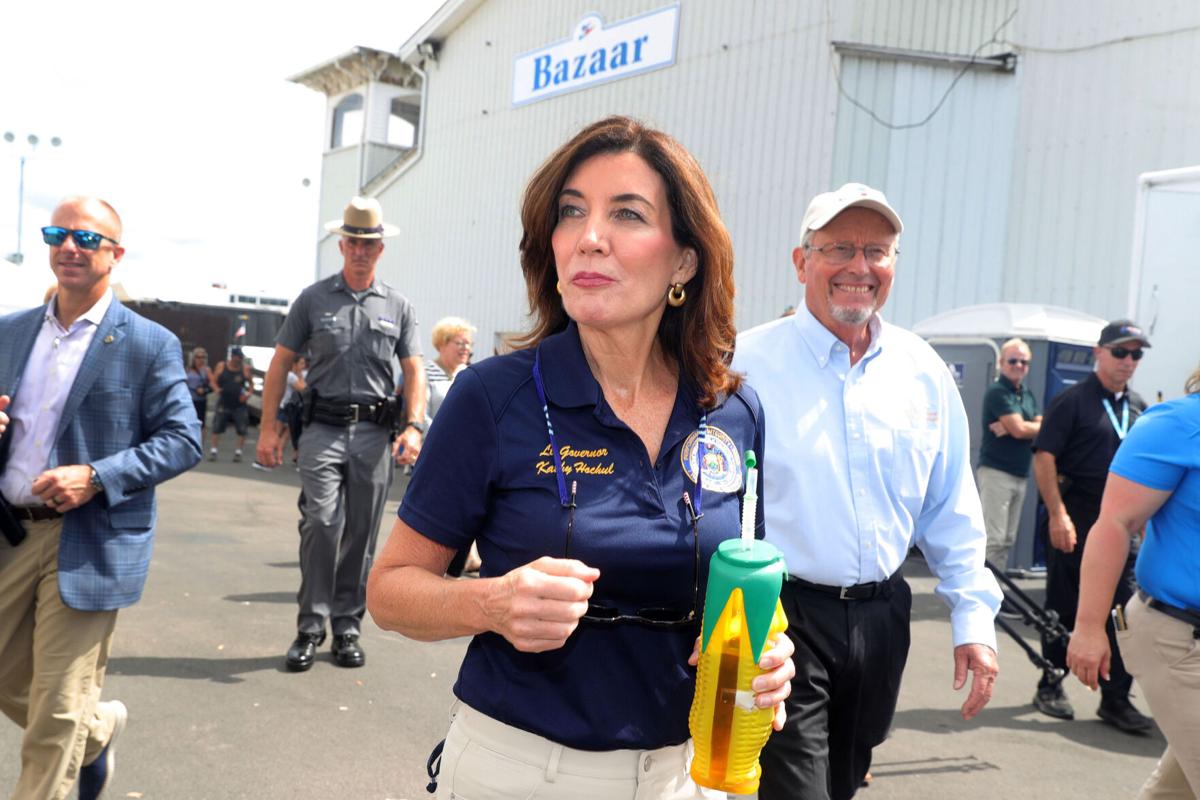 Lt. Gov. Kathy Hochul on a visit to the Erie County Fair in Hamburg on Sunday, with New York State Agricultural Commissioner Richard Ball, at right. 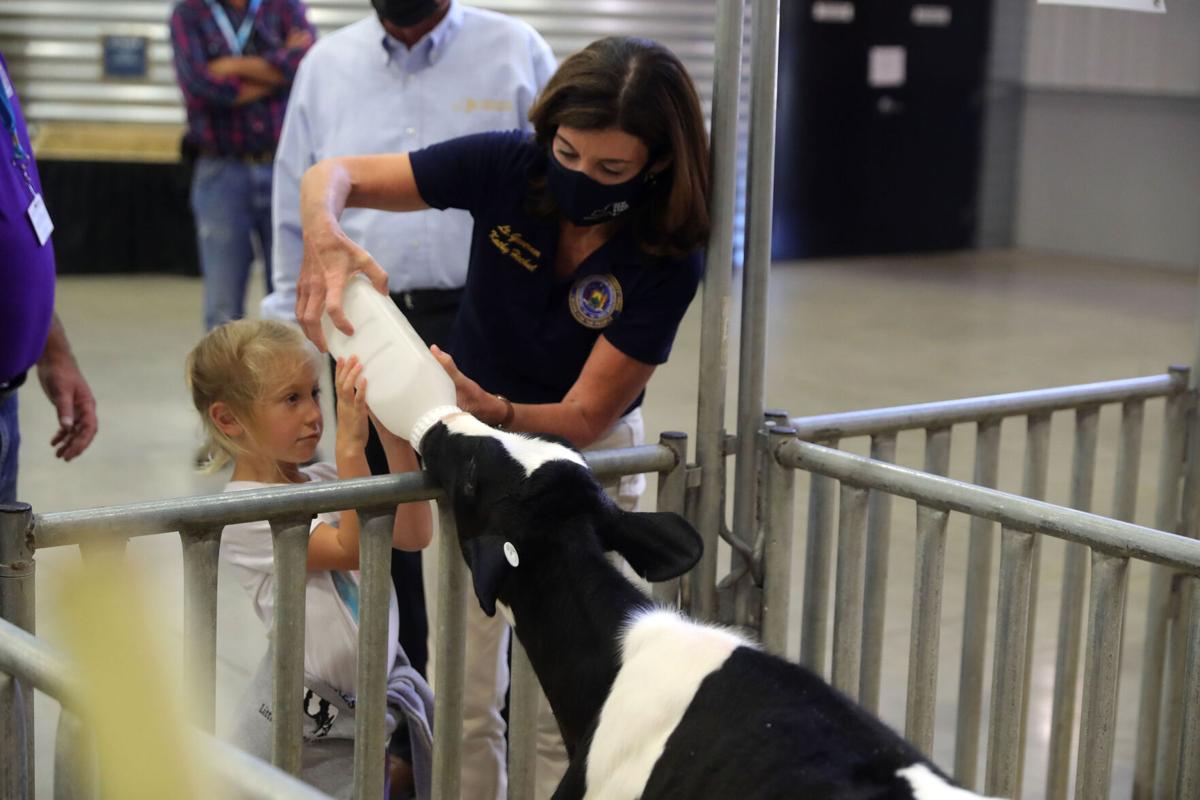 Liv Ennis, 6, of Genesee, and Lt. Gov. Kathy Hochul give a bottle to a calf on a visit to the Agricultural Discovery Center at the Erie County Fair on Sunday. 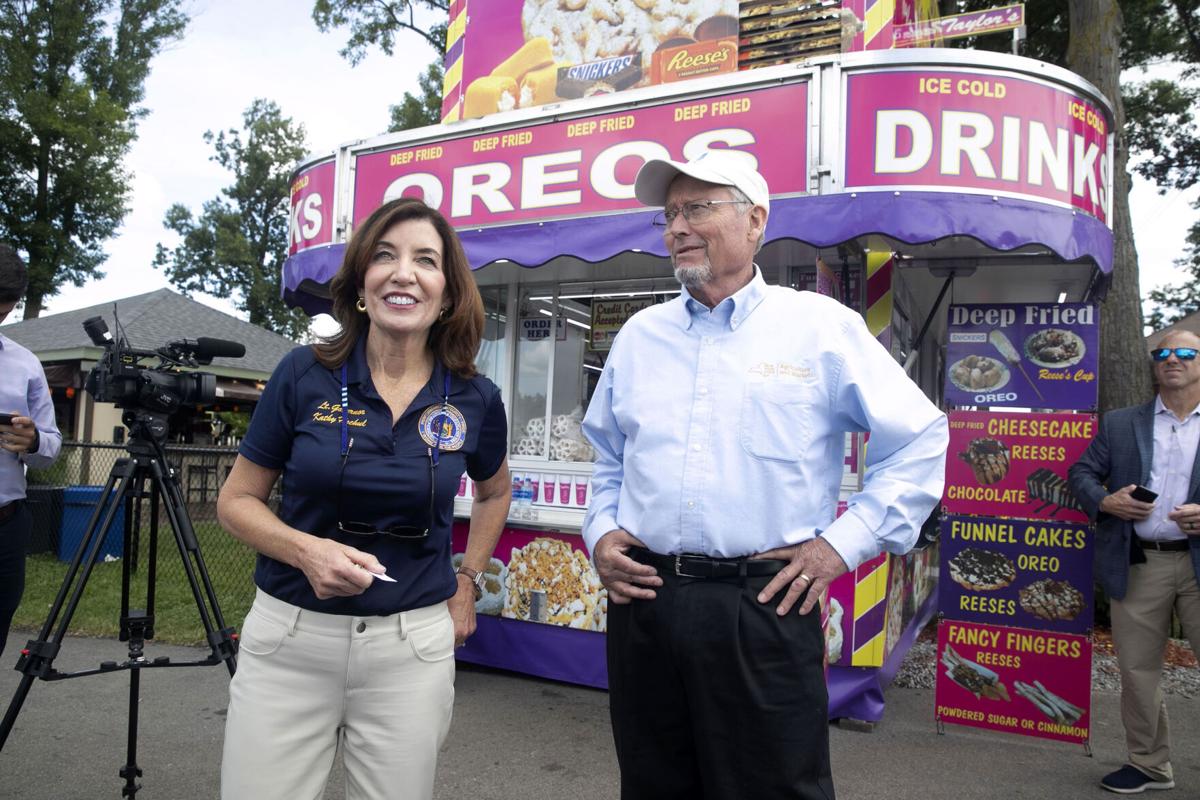