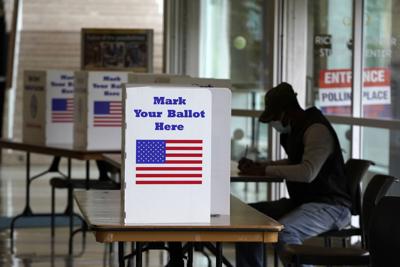 More candidates for mayor of Buffalo are emulating Byron W. Brown’s last-minute efforts to qualify for the general election ballot, raising the possibility of a crowded November field that elections officials say could produce “chaos.”

“This is the problem with the judges' ruling,” said Erie County Democratic Elections Commissioner Jeremy J. Zellner. “It allows for open chaos in the state.”

Indeed, one of the write-in candidates competing in a Thursday mayoral debate with Brown and Democratic primary winner India B. Walton said Friday he will circulate designating petitions at tailgate parties prior to Sunday’s Pittsburgh Steelers-Buffalo Bills contest at Highmark Stadium, as well as in city bars during the game.

“Judge Sinatra’s ruling found there was no deadline and opens the window for other candidates,” said attorney Benjamin S. Carlisle, who anticipates little difficulty in gaining the 750 required signatures in coming days and the advantage of a place on the ballot versus the complicated write-in process.

The possibility of candidates for various races across the state filing for office as a result of the Brown case, Zellner said, prompted the New York State Elections Commissioners Association to file a brief in support of the Erie decision to appeal. He noted, however, that the Erie County ballot – except for the contest for Buffalo mayor – has been certified and no other candidates are expected for other offices.

In 2019, the state Legislature moved the filing deadline to appear on the ballot to no later than 23 weeks before the Nov. 2 election, or May 25 this year. The previous cutoff was 11 weeks before Election Day, which the Legislature changed in 2019 after the date of the primary was moved from September to June.

On Sept. 3, Sinatra granted a preliminary injunction (later stayed by the U.S. Court of Appeals Second Circuit) prohibiting Erie County elections officials from enforcing traditional deadlines for petitions, and requiring them to put Brown’s name on the ballot. The Erie County Board of Elections voted last week to appeal the Sinatra decision, while Mohr and Zellner split their votes on the Wojtaszek ruling that resulted in no further action.

Brown’s name remains on the ballot until the board's appeal and another filed by the Walton campaign are considered in coming days.

In the meantime, other ballot questions are clouding the process of electing a mayor of Buffalo on Nov. 2. The possibility of rulings qualifying Brown for the ballot could complicate the campaign that had been urging voters to write in his name after losing the June 22 primary. Brown’s “Write Down Byron Brown” signs have appeared on supporters’ front lawns throughout the city in recent weeks. But elections officials note that if Brown’s name appears on the Buffalo line of the ballot, a write-in vote will not be counted.

“The focus of the campaign should be one or another; the law is very straightforward,” said state Board of Elections spokesman John W. Conklin. “If there is a write-in for a person whose name is on the ballot, that should not be counted.”

Mohr, however, said much of the intent behind the write-in law stems from the days of lever voting machines and the effort of raising a panel at the top of the ballot to enter a vote. He said New York law emphasizes “intent of the voter,” and that concerns over double votes on the old machines have been eliminated under the new system based on paper ballots.

“There is absolutely no reason why we need that law with paper,” Mohr said.

”I think we will again end up in litigation,” he added.

Mohr also said he may reconsider his own vote not to challenge the State Supreme Court ruling depending on the law established in any pending appeal. Brown’s attorney argued that Walton’s appeal should be rejected because she had no standing in the case, he noted, as opposed to the law’s constitutionality.

“If the court says it will not hear the case because India Walton does not have standing because it’s not an election [law] case, the board may reconsider,” Mohr said. “We look to have a decision made on the merits and not on some procedural grounds.”

Sources in the mayor's campaign say it met the Legislature's new deadlines while other candidates may not. And it anticipates no problem in educating voters about a possible new ballot line rather than the write-in process, possibly even switching out the "Write Down Byron Brown" signs.

"The mayor's campaign remains confident in the two rulings issued last week and that the mayor's name will appear on the ballot," said spokesman Conor Hurley, adding he expects Brown's supporters to be sufficiently committed to cast their votes via any method.

Mayor Byron W. Brown is stepping up his attack on challenger India B. Walton’s crime fighting approach in a new ad claiming her plan to chop $7.5 million from the Buffalo Police Department budget will spur the layoff of 100 officers.