The morning began with Gov. Andrew Cuomo's lawyer fiercely defending him from allegations of sexual harassment.

Engulfed by sexual harassment scandal, Cuomo resigns as governor of New York. Lt. Gov. Kathy Hochul of Buffalo will be the next governor.

Within an hour and a half, Cuomo announced he would resign, clearing the way for his lieutenant governor, Kathy Hochul, to become the first woman governor of New York and only the second from Buffalo.

It was a jarring exit for Cuomo, who had become an international celebrity at the peak of the Covid-19 pandemic when his daily video briefings became must-see TV.

A defiant Cuomo denied groping any women, but apologized for his actions in a 30-minute resignation speech broadcast exactly a week after Attorney General Letitia James released the scathing results of an investigation into accusations that Cuomo sexually harassed 11 women.

"Given the circumstances, the best way I can help now is if I step aside and let the government get back to government," Cuomo said.

He said his resignation would take effect Aug. 24, ending his 10 years at the top post in the state.

Speculation that Cuomo's resignation was all but inevitable had been at fever-pitch early this week as his political support evaporated in the wake of James' report. But even as his closest advisers abandoned him, Cuomo was signaling late Monday that he was digging in for a long and brutal battle. So his announcement Tuesday still stunned the New York political world, upstaging the U.S. Senate's passage of the $1 trillion infrastructure bill.

“Today closes a sad chapter for all of New York, but it’s an important step towards justice," James said.

Cuomo’s troubles are not just related to allegations that he sexually harassed women, including young staffers in his office. On that matter, local law enforcement officials say Cuomo’s exit does not halt the criminal probes they have underway.

Cuomo has also been under an impeachment investigation in the Assembly for allegedly using state resources to write a book that brought him $5.1 million last year; pushing friends and family members ahead of the line to get Covid-19 tests; and for undercounting nursing home Covid-19 deaths last year.

The first public hint that Cuomo's resignation was imminent came in the form of a media advisory from Cuomo's press office emailed at 10 a.m. .

"Outside Counsel Rita Glavin Holds Virtual Briefing," it said. The briefing would begin at 11 a.m., precisely a week to the hour from when James released her report.

Then came reports that Cuomo had just arrived in New York City via helicopter.

In a live video address, Glavin blasted James' report, accusing investigators of being biased and accusing the press of seizing on the allegations unfairly.

"This was not about an independent review of allegations and circumstances surrounding them," she said. "From Day One, this was about building a case against Governor Cuomo."

She questioned the motives of one of Cuomo's accusers and wondered how some of the alleged actions could be construed as sexual harassment, such as when he cupped his hands around a woman's face at a wedding and asked if he could kiss her.

Reaction pours in after Cuomo steps aside

Read what many politicians had to say soon after Gov. Andrew Cuomo announced his resignation.

"This does not rise to the level of sexual harassment that we impeach a sitting governor," Glavin said.

As she spoke, another media advisory was emailed to newsrooms from Cuomo's office: "At approximately 11:45 a.m. Governor Cuomo addresses the People of New York."

Cuomo, seated between an American flag and the New York State flag and with the state seal behind him, raised questions about the allegations against him.

"There is a difference between alleged improper conduct and concluding sexual harassment," he said.

As he had done before, he apologized for his actions, but said he didn't intend to make anyone feel uncomfortable.

"I have been too familiar with people. My sense of humor can be insensitive and off-putting. I do hug and kiss people casually, women and men. I have done it all my life," he said. "I'd never crossed the line with anyone, but I didn't realize the extent to which the line has been redrawn."

He specifically mentioned the state trooper whose allegations were outlined in the report, saying he had asked for her to be transferred to his protection detail because he wanted it to be more diverse. He said he didn't remember touching her. He said he touches all of the troopers in his detail, whether male or female, and that it is meant to be friendly.

He grew emotional at times during the 30-minute speech as he talked about watching the news coverage of the allegations with his three daughters, twins who are 26 and one who is 23.

"I have lived this experience with and through them. I have sat on the couch with them, hearing the ugly accusations for weeks. I've seen the look in their eyes, and the expression on their faces. And it hurt," Cuomo said.

"I want my three jewels to know this. My greatest goal is for them to have a better future than the generations of women before them. ... I want to make sure that society allows them to fly as high as their wings will carry them. There should be no assumptions, no stereotypes, no limitations."

Cuomo ended his statement asking New Yorkers to remember what they have gone through since Covid-19 hit last March, when he was lionized for his leadership. He credited the state's residents for their response to the pandemic.

"Trailers carried the bodies of our fallen brothers and sisters, but you refused to give up, and you fought back. And you went from going from the highest infection rate in the nation to one of the lowest. And that was powerful in its effect. It was beautiful to see. And it was an honor to lead," Cuomo said.

His exit leaves Hochul to deal with the state’s next immediate pandemic situation: a resurgence of Covid-19 cases, hospitalizations and deaths.

Minutes after his speech, Cuomo was seen driving himself out of a parking lot. Dozens of television cameras and photographers packed behind barricades snapped photos and video of the soon to be ex-governor. He arrived soon at the helipad and he waved and smiled for the cameras. As he walked toward the waiting aircraft, Cuomo's daughter Michaela patted her hand on his back.

At 12:40 p.m., Hochul, who had previously called Cuomo's behavior "repulsive and unlawful" but stopped short of calling for his resignation, tweeted her statement.

"I agree with Governor Cuomo's decision to step down," she said. "It is the right thing to do and in the best interest of New Yorkers. As someone who has served at all levels of government and is next in the line of succession, I am prepared to lead as New York State’s 57th Governor."

Hochul will make a speech at 2 p.m. Wednesday from the state Capitol in Albany.

The Editorial Board: Cuomo makes the right call

"New Yorkers won’t have to be consumed by weeks or months of political and legal maneuvering, at a time when Covid-19 remains a threat and other matters demand attention," writes The News' Editorial Board. 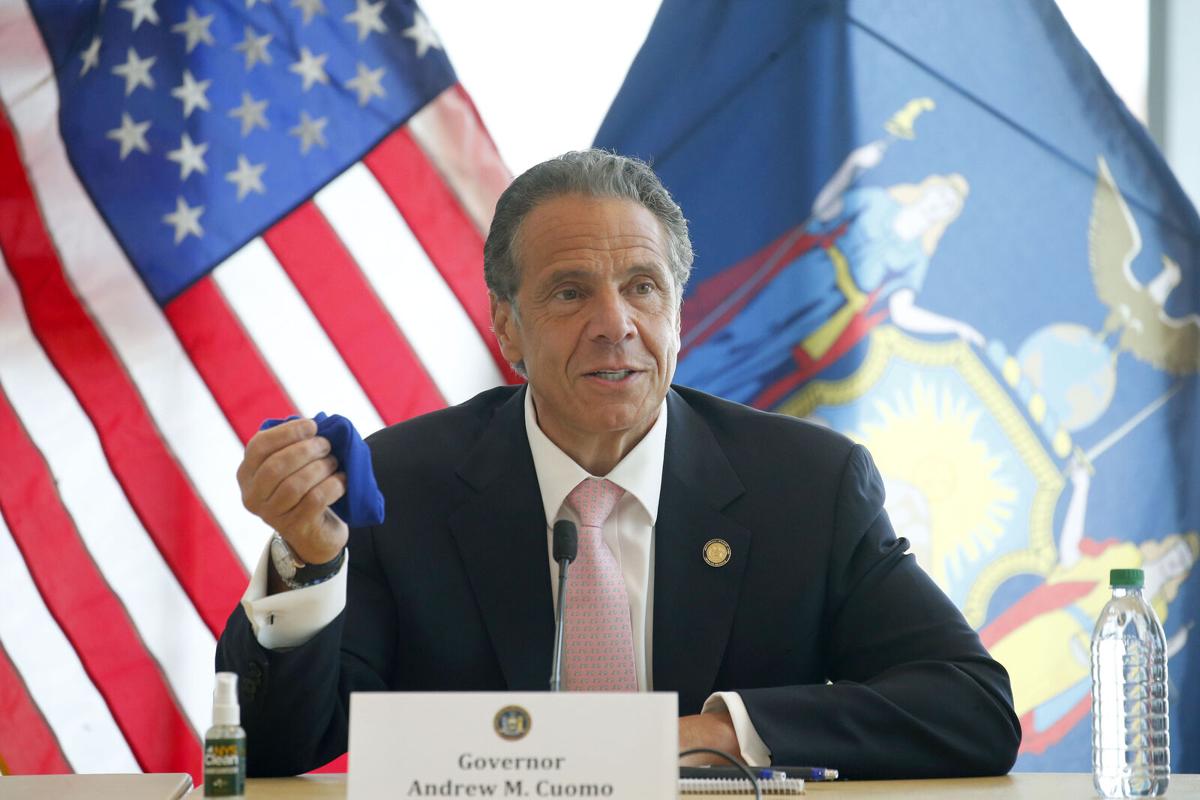 Gov. Andrew M. Cuomo speaks to the media during an event at the Buffalo Niagara International Airport in Cheektowaga on May 20, 2021. 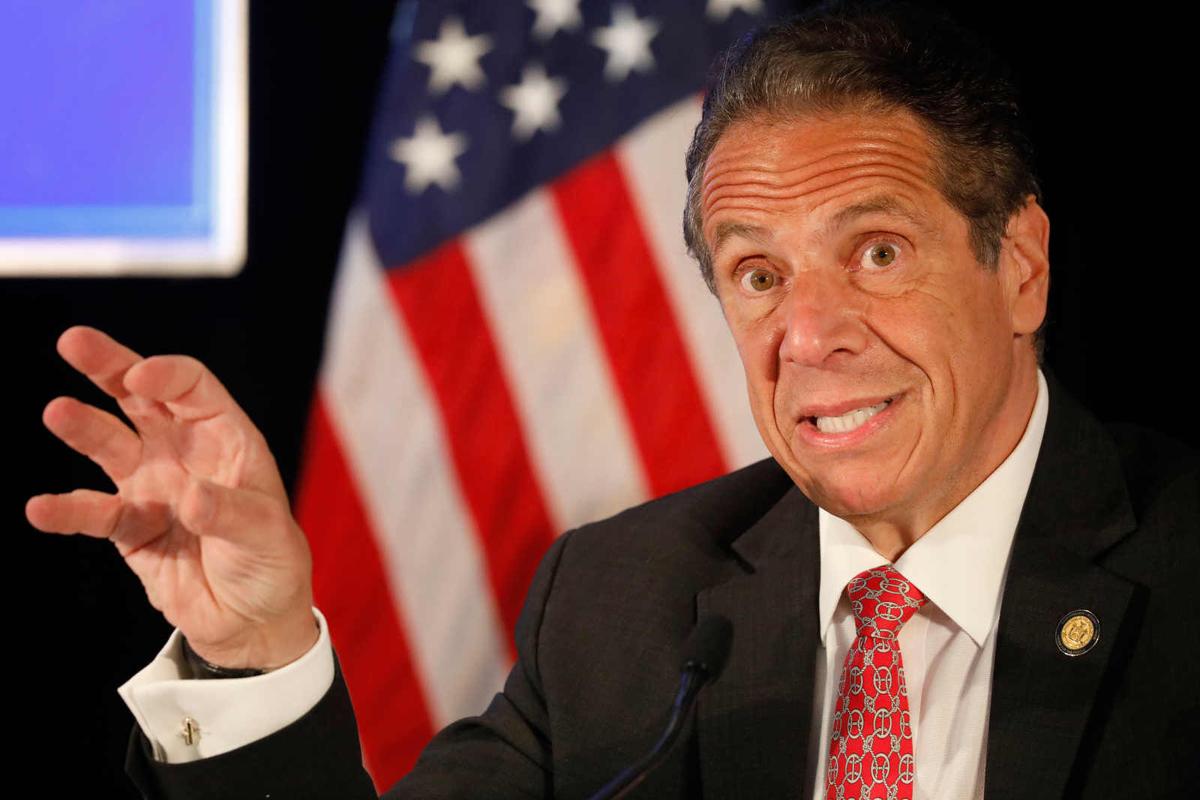