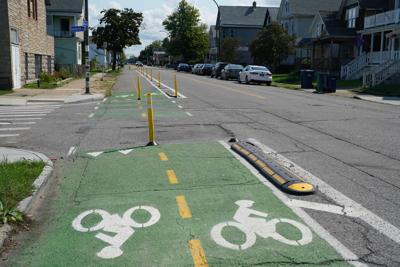 The beer truck was turning right onto Forest Avenue, not far from SUNY Buffalo State, when the crunching noise could be heard.

The project’s backers call the project good for cyclists and pedestrians.

But those opposed to it say the bollards and other short-term measures have created a traffic mess. David Toscano, who lives nearby on Manchester Place, now avoids the intersection of Forest and Grant avenues.

“The intersection of Forest and Grant is a nightmare right now,” Toscano said.

The pilot project, pitched by GObike Buffalo and allowed by City Hall, encompasses Forest Avenue between Rees and Niagara streets. The project narrowed that stretch of Forest for vehicles to add bike lanes and the curb extensions, shortening the distance pedestrians have to cross the street.

It's the kind of project that runs counter to the transportation mindset that has long favored drivers over cyclists and pedestrians. Municipalities across the region are building out their bike networks, or at least talking about it, as biking has become more popular. The past year has seen the installation of the region’s first permanent, two-way protected bike track on Niagara Street in Buffalo and the completion of the 750-mile Empire State Trail. Recent construction also extended or improved the Shoreline Trail in the City of Tonawanda and the Town of Tonawanda and the Niagara Scenic Parkway, formerly the Robert Moses Parkway, in Niagara Falls.

Not all of the projects have proved popular. Public outcry prompted Lackawanna to remove a two-way protected bike track on Ridge Road.

Now the outcry is coming from the Upper West Side neighborhood, with complaints about the street not being wide enough to add the bike lanes. Big trucks, garbage trucks and school buses have flattened the bollards, raising a question about whether permanent versions would last long. Another complaint is the project has taken away parking on one side of the street, reducing parking spots for businesses, whose owners say business is suffering as a result.

Brian Lauer lives on Danforth Street, one block from Forest.

“There’s no way for cars to pull over if the fire trucks come out,” he said. “With the buses, I’m afraid one of the kids are going to get hurt or killed the way that it’s just set up there.”

The temporary installations put in place by GObike Buffalo are a pilot project meant to get feedback. The project area includes a half-mile stretch of Forest between Rees and Niagara streets, an area where some 4,500 residents live.

The pilot project was GObike's idea. It reached out to the city last year after receiving a grant, and the project includes a public outreach component.

GObike organizers approached the city with a few ideas and concepts. The city, which worked with GObike to finalize a concept, permitted the work.

“The main reason we were there in the first place ... was because of the high volume of complaints about speed and reckless driving, alongside high levels of crashes, injuries, and unfortunately a death,” said GObike spokesman Kevin Heffernan. “We hope they understand we're there to improve safety. That often comes as an annoyance at first, but the implementations tend to settle as drivers and residents adjust, and the numbers of people out walking and riding increase.”

The trial period arranged with the city's Department of Public Works, Parks & Streets will end when the department moves into snow removal mode, probably in November, Heffernan said. The bollards and rubber speed bumps will then be removed.

The city plans to repave that section of Forest Avenue next year. The cost will partly depend on the final roadway configuration.

“We’re seeing this as a good collaboration before we do the permanent work to really understand what the need is in that section of Forest Avenue,” said City Engineer Nolan Skipper. “The last thing DPW wants is to pave and stripe the road with potential changes without that public input as part of the process.”

If the temporary measures become permanent, concrete bump-outs like the ones on Niagara Street will be installed.

“We want to get the message out there that this is a pilot project installed by GObike, and DPW along with GObike is looking for public feedback to understand what is and is not working before moving forward to a permanent installation,” Skipper said.

Residents, neighbors and others are encouraged to continue providing feedback, GObike leaders say.

“The survey is ongoing until probably a couple of weeks, through mid-November," Heffernan said.

More than 700 flyers were distributed to nearby homes. Posters in eight languages were tied to streetlamps along Forest. And social posts included the survey.

Veronica Gay has lived at 151 Forest Ave. for 20 years. She circulated a letter of protest with about 275-plus signatures from surrounding neighbors and business owners. She plans to mail it to Council members and Mayor Byron Brown in coming weeks.

“It’s basically like a letter or protest," said Gay, president of the Forest Avenue Community Block Club. "In the letter it is giving the reasons behind why a bike path is not a good idea, at least not on our stretch of Forest Avenue. The Fire Department and all of the very big semis and delivery trucks use that, and it’s not wide enough.

“I’m just looking to have my neighborhood be safe,” she said. “I don’t want anybody to get hurt. I’m not against a bike path. I just don’t think that it’s a good fit for Forest Avenue.”

The Editorial Board: Despite initial complaints, Buffalo must accommodate cars and cyclists safely

Some progress has been made, but there’s a long way to go, and – yes – there will be plenty of hiccups before our streets are complete.

Backers say the bills are needed to address the persistently high number of traffic-related injuries and deaths, particularly among pedestrians and cyclists.

As cycling surges, push is on for better bike network amid some pushback from motorists

Municipalities across the region are in discussions to further build out their bike networks, perhaps with the help of the more than $1.5 billion targeted to bike and pedestrian projects in the recent federal infrastructure bill.

Scientists: Why there's more light than there should be in the universe

Scientists: Why there's more light than there should be in the universe

The reason Japanese fans clean up after World Cup matches

The reason Japanese fans clean up after World Cup matches 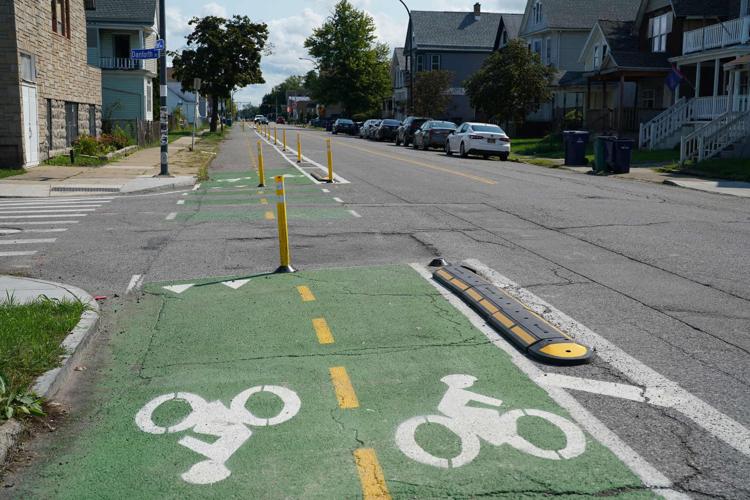 The temporary bike lanes on the north side of Forest Avenue in Buffalo, Friday, Sept. 9, 2022. 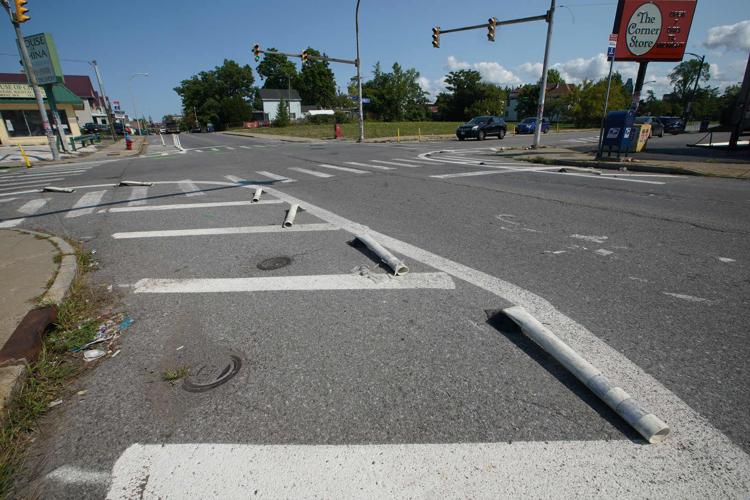 Most of the temporary traffic cones at the intersection of  Forest Avenue and Grant Street have been knocked over by vehicles unable to negotiate the narrow lanes, Friday, Sept. 9, 2022. 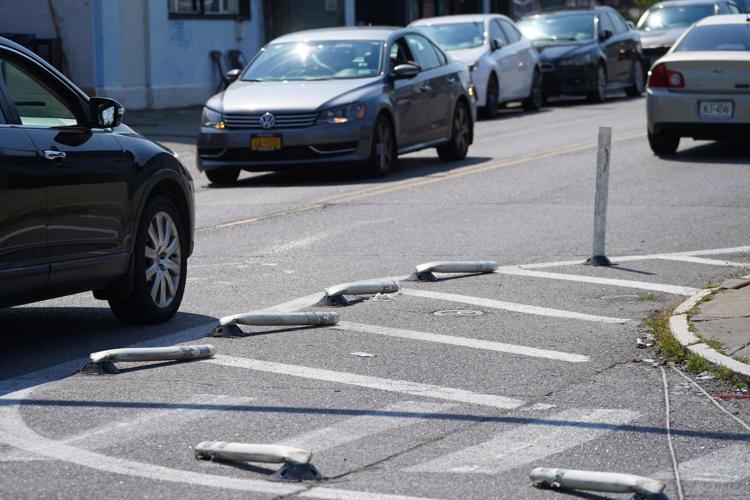 Most of the temporary traffic cones at the intersection of of Forest Avenue and Grant Street have been knocked over by vehicles unable to negotiate the narrow lanes. 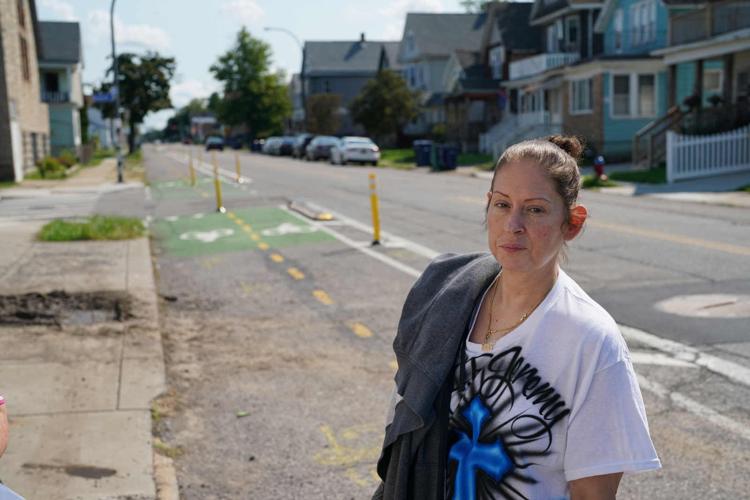 Forest Avenue resident Leah Hinman says she couldn't back out of her driveway because of the cones separating the bike lanes on the north side of Forest Avenue in Buffalo. 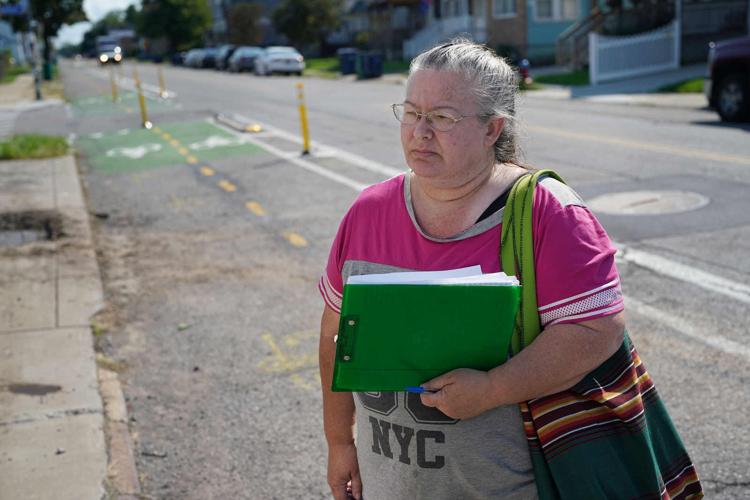 Veronica Gay, president of the newly formed Forest Avenue Community Block Club, has been collecting petitions to remove the bike lanes that were recently added as a temporary measure on the north side of Forest Avenue in Buffalo.