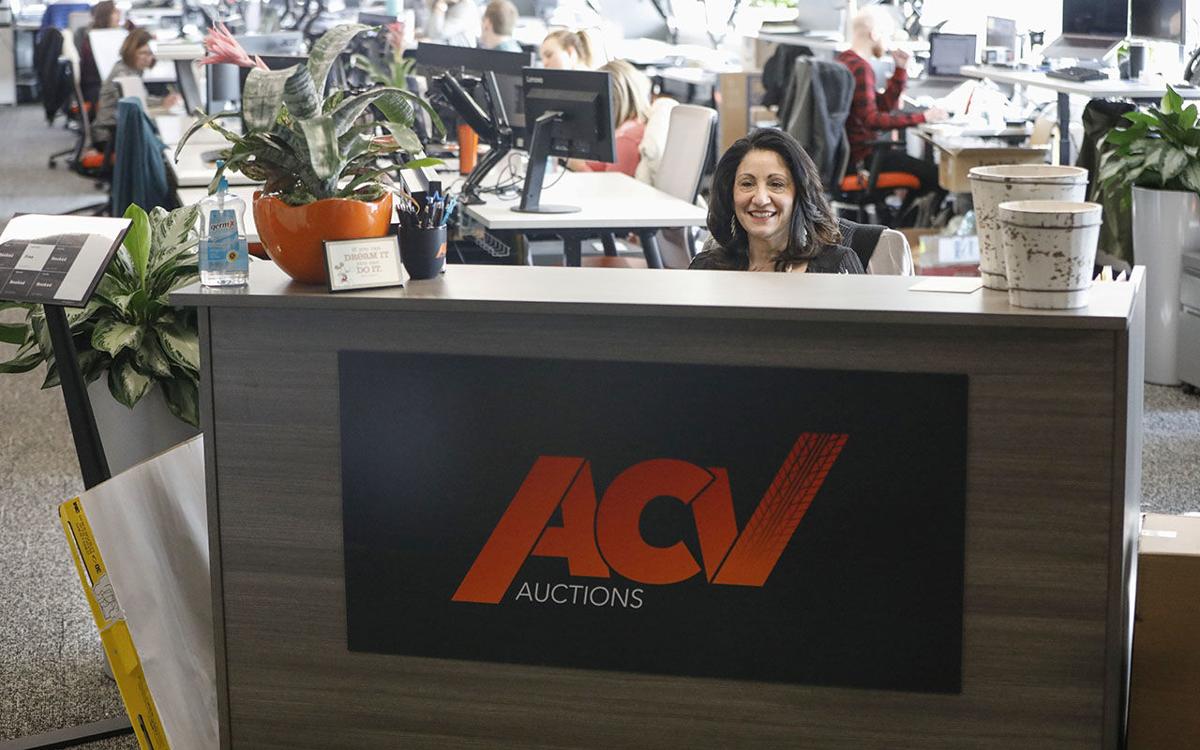 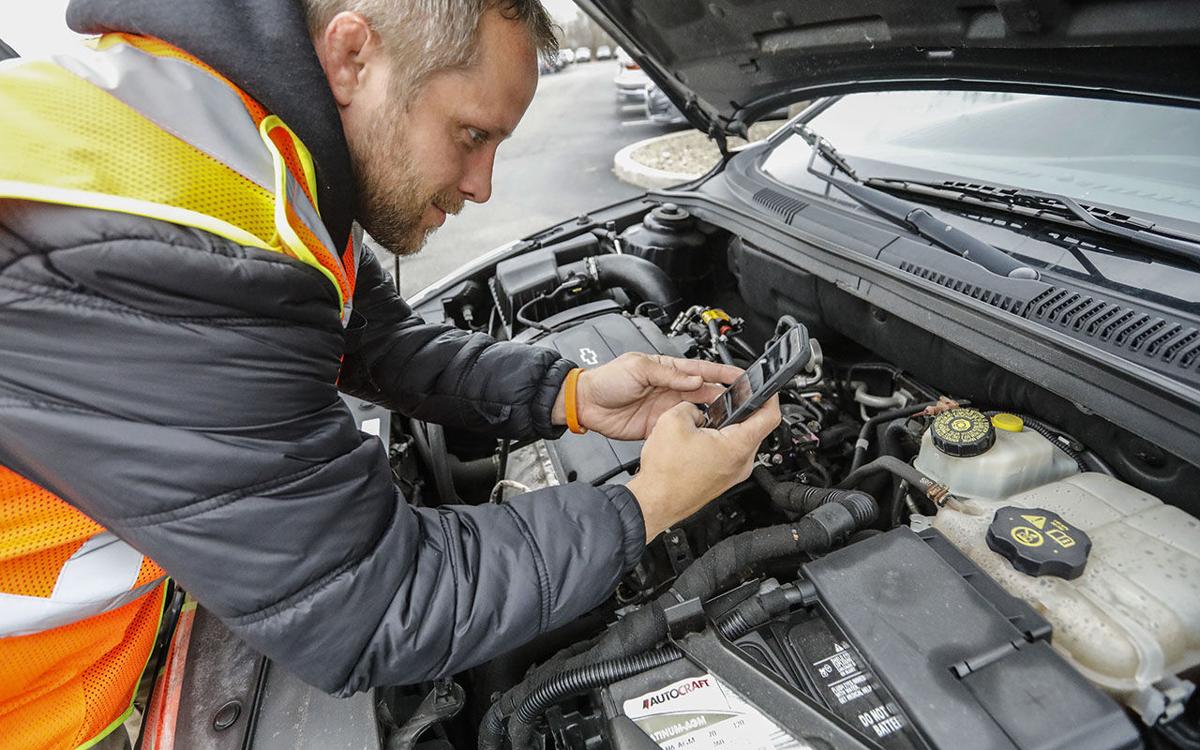 Dan Klonoeski, vehicle condition inspector for ACV Auctions, takes a photograph inside the engine compartment of a used car at Northtown Toyota that was traded in before the vehicle is listed for auction by ACV, Tuesday, April 30, 2019. Each aspect of the car being inspected is photographed so a potential customer can see every aspect of a listed vehicle. (Derek Gee/Buffalo News)

Buffalo has its first confirmed unicorn.

Only this one isn't a horse with a horn on its head. It's a privately held startup company that has achieved a rare benchmark of being valued by investors at $1 billion or more.

That's far more common in Silicon Valley, New York City, China and other business or technology hubs, where the herd of unicorns already includes many well-known names. But they're not found in places like Buffalo – at least not until now, with ACV Auctions.

ACV, the online marketplace for used cars that started as one of the early 43North winners, said Tuesday that its latest round of investment funding valued the company at more than $1.5 billion – at least on paper.

That's the first time it – or any local startup company – has surpassed the billion-dollar mark in valuation, though well-established Buffalo firms like Delaware North Companies and Rich Products Corp. are already worth far more.

“For a long time, people said I can’t stay here because I can’t build a company here," said Jordan Levy, one of the region's most successful entrepreneurs and venture capital investors, who started and led Seed Capital Partners and Z80 Labs. "This is proof positive that you can stay and remain in Western New York and build a business.”

Not only is it rare to reach that goal, but it's even rarer for it to happen outside the usual technology and investment centers.

The term "unicorn" was first used in 2013 to describe a startup valued at $1 billion by Aileen Lee, founder of Cowboy Ventures, a Silicon Valley venture capital firm. She was referring to how rare it is for a private firm to reach the $1 billion valuation mark. Just 0.07% of the software startups founded since 2000 ever reached $1 billion in value.

Some of the earliest unicorns were founded in the 1990s, including Google – now Alphabet Inc. – which has a valuation of more than $100 billion. Many more followed in the next two decades, led by now familiar names such as Facebook, Twitter, Groupon, Skype, Wayfair, Uber and Lyft, among others.

Those companies have since gone public on the stock market or were acquired. But a host of new unicorns have emerged, including Airbnb, SpaceX, Juul Labs, Instacart, DoorDash, Credit Karma, Vice Media, Nextdoor, Epic Games, Reddit, Quora, 23andMe and Pinterest.

According to CB Insights, a technology market research firm, there were 266 unicorns worldwide valued at $861 billion in total as of August 2018. China claimed 125, while the United States had 119. The next closest country was India with 26.

Buffalo also has had other technology businesses that have grown – like Synacor and Campus Labs – but none were close to being a unicorn until ACV.

And while Western New York has several publicly traded companies that are worth more – like M&T Bank Corp. at $21.7 billion, Moog at $6.1 billion, Life Storage at $5 billion and National Fuel Gas Co. at $4 billion – those are not privately owned or startups.

"It’s extraordinary to get that badge of unicorn status," Levy said. “It means you do not have to leave Buffalo to create a unicorn, to create a massively successful company that can get funded by the finest and most prominent investors in America.”

Could this be Buffalo's first tech goliath?

The company, which is now based in the Innovation Center on Ellicott Street along the Buffalo Niagara Medical Campus, was the $1 million grand prize winner of the 43North business competition in 2015.

Since then, it has grown quickly in the last four years with help from various investors, state funds and other programs, particularly since early 2018. The company sold 24,000 wholesale vehicles in August – well over twice the rate from a year earlier, although that's still just 2% of all vehicles sold at U.S. auctions.

Its workforce has swelled to 1,011 nationwide, with 372 in Buffalo. It's also steadily added to its executive leadership, which was already deeply rooted in entrepreneurs. Magnuszewski, its co-founder, previously led the Z80 Labs technology incubator program that Levy and Ron Schreiber started. And CEO George Chamoun previously founded Synacor.

On Tuesday, ACV said it had received another $150 million in funding through five major venture capital and investment firms. It was the terms of that funding that determined ACV's new market value. The latest round was led by Wellington Management Company and Fidelity Management & Research Co. – both based in Boston – and included more money from existing investors like Bain Capital Ventures, Bessemer Venture Partners and Tribeca Venture Partners.

In all, ACV has now raised nearly $300 million in five separate funding rounds since its launch, and it's widely expected to go public within the next two to three years.

"What ACV really represents is the ability to scale and attract significant and sophisticated investment dollars into our region," Gress said. "Here in Western New York alone, they’ve created hundreds of jobs and are every day growing their sales. This is what new companies that are coming to Buffalo to be part of the startup community want to emulate. The’re a shining example of what others want to follow."

That's a credit not only to the company, Levy said, but also to the state and local efforts to create what has been called an "entrepreneurial ecosystem" in Western New York to support and grow startup companies.

"That's pretty spectacular," Levy said. "They took advantage of virtually everything that was put in place to create this environment. It’s such validation of everything that we set out to do. So anybody that wants to sit here and complain better look in the mirror, because you can sit here and do it."

And it'll pay dividends for years to come, he added. The company has already created "a massive amount of jobs," Levy said, but when it goes public, it'll also create dozens of millionaires, who will turn around to buy houses and cars, patronize local restaurants and retailers, and otherwise spend that money in a "mushroom effect" on the region.

"This exciting milestone is the clearest example of the growth and great strides being made by Buffalo’s venture based entrepreneurial economy," said Eric Gertler, acting commissioner and CEO-designate of Empire State Development Corp. "With its talent base and energy, Buffalo is emerging as a premier innovation and startup center."

Some of the top leaders also may become angel investors on their own – like ACV co-founder Greco – to help fund the next round of entrepreneurs in the region, Levy said.

For now, ACV said it planned to use the additional cash to continue investing in its technology-based products, while also expanding into new markets, particularly from Texas to California.

Its mobile app technology provides a range of services including third-party inspections, title and payment processing and even transportation. It also manages accounts and arbitration. Already, the company says, its Vehicle Condition Inspection and Report has become a standard for the industry.

It has patents pending on an imaging tool called Virtual Lift - which takes pictures of the underside of cars to eliminate a typical blindspot for inspections – and on its Audio Motor Profile tool that captures clear sound of the car's engine while running, to demonstrate its actual condition.

ACV will use the money to expand its workforce and reach across North America. It currently serves customers in 140 markets – up from just 30 at the start of 2018 – with over 400 full-time "vehicle condition inspectors," who are trained by the company to provide comprehensive reports on each car.

ACV said it would announce details later this week, but will use the funds to invest in market expansion, technology and product innovation.

Dan Klonoeski, vehicle condition inspector for ACV Auctions, takes a photograph inside the engine compartment of a used car at Northtown Toyota that was traded in before the vehicle is listed for auction by ACV, Tuesday, April 30, 2019. Each aspect of the car being inspected is photographed so a potential customer can see every aspect of a listed vehicle. (Derek Gee/Buffalo News)