Subscribe for $1
Read Today's E-Edition
Share This
From an Amherst school bus to saving lives in Sudan, a 'Lost Boy' finds his way
0 Comments
Share this
1 of 3 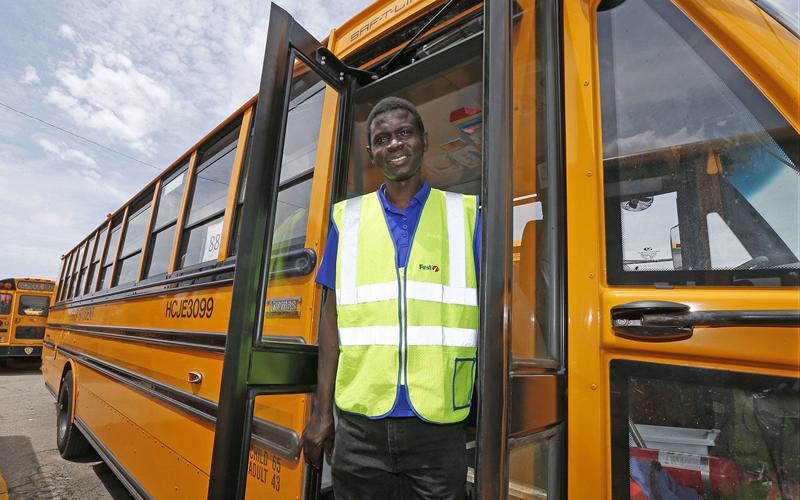 Fidele Dhan drives a school bus to allow himself time to work throughout the summer on sustaining a clinic in South Sudan. (Robert Kirkham/Buffalo News) 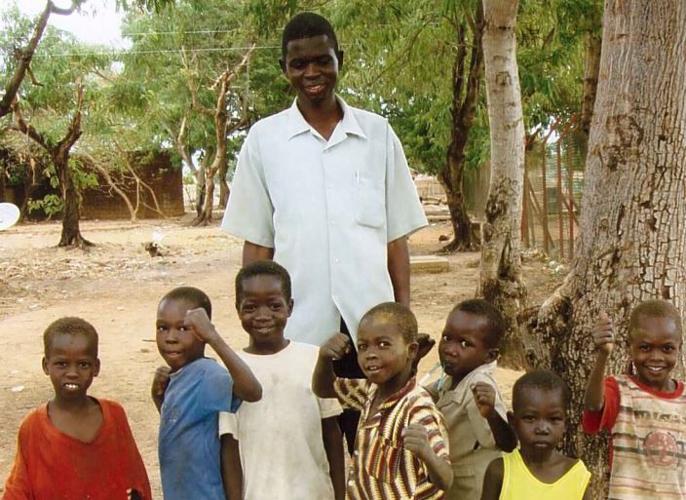 Fidele Dhan with children in South Sudan. Dr. Vijay Aswani planned to be at this clinic this week. 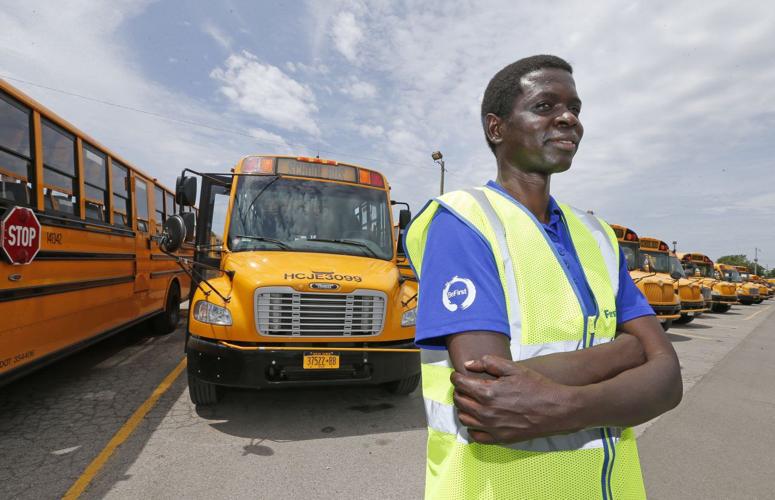 Fidele Dhan, a Sudanese "lost boy" and University at Buffalo graduate, explained why he makes good use of summers off, as a school bus driver.

The children were on an emotional high wire Monday, knowing it was the final day of school, and Fidele Dhan could measure their happiness through volume alone.

Dhan, a bus driver for First Student, drove his usual route in Amherst for one last time before school ends for summer. As the laughing boys and girls spilled off the bus, a few paused for quick farewells, 8- and 9-year-olds saying goodbye to a well-known presence.

They could not imagine what their bus driver endured at the same point in life, a trial that explains his own readiness to greet the summer.

When Dhan was 9, a child in a village in South Sudan, his community was attacked by government troops. Amid the chaos of gunfire and burning buildings, he was split up from his family and joined a group of frightened boys. They ran until they were exhausted, finally dropping to sleep on the ground.

What Dhan recalls most vividly is not the terror of the attack itself, but the feeling when they awoke in the morning.

They were sure the people they loved would come to help.

“Dawn broke,” he said, “and we were waiting for our parents.”

They stayed put until thirst and hunger made it impossible to wait. They started moving, still watching for the troops, eventually melding into a larger group of fleeing children.

It would be 19 years before Dhan again saw his mother. The children rose into legend as the “Lost Boys of Sudan.” They saw friends drowned in swollen rivers or attacked by crocodiles. Others died from rotten food or disease. They roamed for roughly 1,000 miles, making it to Ethiopia before fleeing once again, finally reaching sanctuary in a refugee camp in Kenya.

"It turns into survival," Dhan said, "and you hold in your tears."

For Dhan, now 40, the journey led to refugee status in Syracuse and to college in Buffalo. This city became the pivot for confronting the searing lesson from that first morning alone.

Amid suffering, children should always know that help will come.

Dhan is the founder of a medical clinic in Koiyom, his home village. Since April, when it opened, it has served over 2,000 people from the region, said Ginny Donohue, chairwoman of the volunteer board for the South Sudan Villages Clinic. Dhan initially worked with Reaching Out 2 Africa, a Western New York Catholic organization that collected $75,000 to put up the central building, much of it raised by youth groups throughout the region.

The challenge became finding a way to pay for staff. Five years ago, Dhan turned for help to Donohue, founder of On Point for College, an upstate organization that reaches out to “young adults who have fallen through the cracks,” as Donohue puts it, then helps them make it to college, and stay there.

Dhan trusted her. He doubts he would have graduated from the University at Buffalo without her.

“He was very memorable,” Donohue said. “He’s 6-foot-7, he’s the first ‘Lost Boy’ I had ever met and he has an incredibly kind spirit.”

Dhan drives a bus during the school year because it allows him to spend his summers focused on the clinic. While a collective effort has raised $10,000 to pay for staff and supplies, Dhan and Donohue said the coming months are critical. The place is finally open and running, but they intend to redouble their efforts to find a way to pay the staff.

“I started it,” Dhan said, “because I thought: How can I stand by and do nothing?”

He will spend his summer speaking as often as he can to clubs and organizations, with plans of returning to the clinic at Christmas. The full sense of need came to him in 2006, he said, when he went back to South Sudan for the first time.

The driving goal was reuniting with his family, especially his mother, who had not seen him since the village was attacked. At the time, he was attending the University at Buffalo, and in his language and demeanor he already seemed American.

Dhan said his mother was standing in the road, waiting for him, when he arrived. It is hard for him to explain the power of that moment, and he lost himself in the embrace of his family. Yet as the day went on, he noticed a kind of quiet phenomenon.

People from the surrounding countryside, many of them ill, quietly gathered in the village. One family brought a child in agony, with a fish hook embedded in his tongue. The crowd asked Dhan to examine the suffering boy. Startled, Dhan asked his relatives what was going on.

“You are from America,” they told him, “and they think you can help.”

There was no one else. Dhan forced himself to pull the hook from the mouth of the weeping child. On that same trip, Dhan later survived a bus accident in South Sudan that killed one of his brothers, before returning to Buffalo haunted by everything he had seen. The result was the clinic, which finally is up and running.

While working in Koiyom, Dhan also married his wife, Abang Garang Kuol, and started a family. It took another 10 years before he was able to bring Abang and their children here. His oldest child, Diing, is now 10 and speaks both English and Dinka, and understands why his father's story inspires so many of their friends.

“He’s never forgotten his people or the place he came from,” said Dr. Theresa Stephan Hains, a board member for the clinic, a retired director of the student health center at SUNY Buffalo State and a physician who traveled overseas three times to volunteer at a clinic in Thailand.

“The thing to me, with people who are so fortunate, is that it doesn’t take much to help,” said Hains, who will host a 10 a.m. information session on the clinic Sunday and again on July 7 at UB's Newman Center. “Fidele's worked so hard, and he sticks with it. Literally, one in seven women die in childbirth in that area. People are dying from diarrhea and parasites and because they have no clean water.

“His effort, this small investment, it saves lives.”

Dhan's visit last year to Koiyom was of key importance. He learned there were enough college-trained professionals within walking distance of the clinic to provide a staff. Through the money already collected, he was able to hire nine people, including a midwife and two physician’s assistants, which allowed the clinic to open in April.

The value was established quickly. In early May, Donohue said, the staff responded to a wave of families left homeless by a tornado and brush fire that destroyed eight villages.

Still, the clinic is operating without electricity. It needs mattresses and a tank for storing water from a well.

Dhan will spend the next few months talking about those needs to anyone who will listen, before he returns to his school bus in September. The children will come back with an entirely different kind of laughter, this time masking a twinge of worry about the unexpected.

Their driver understands on a level he hopes they never know.

Sean Kirst is a columnist with The Buffalo News. Email him at skirst@buffnews.com or read more of his work in this archive. Learn more about the South Side Villages Clinic at www.southsudanvillagesclinic.org.

Sean Kirst: The legacy of a physician who saw compassion as medicine

Fidele Dhan drives a school bus to allow himself time to work throughout the summer on sustaining a clinic in South Sudan. (Robert Kirkham/Buffalo News)

Fidele Dhan with children in South Sudan. Dr. Vijay Aswani planned to be at this clinic this week.

Fidele Dhan, a Sudanese "lost boy" and University at Buffalo graduate, explained why he makes good use of summers off, as a school bus driver.