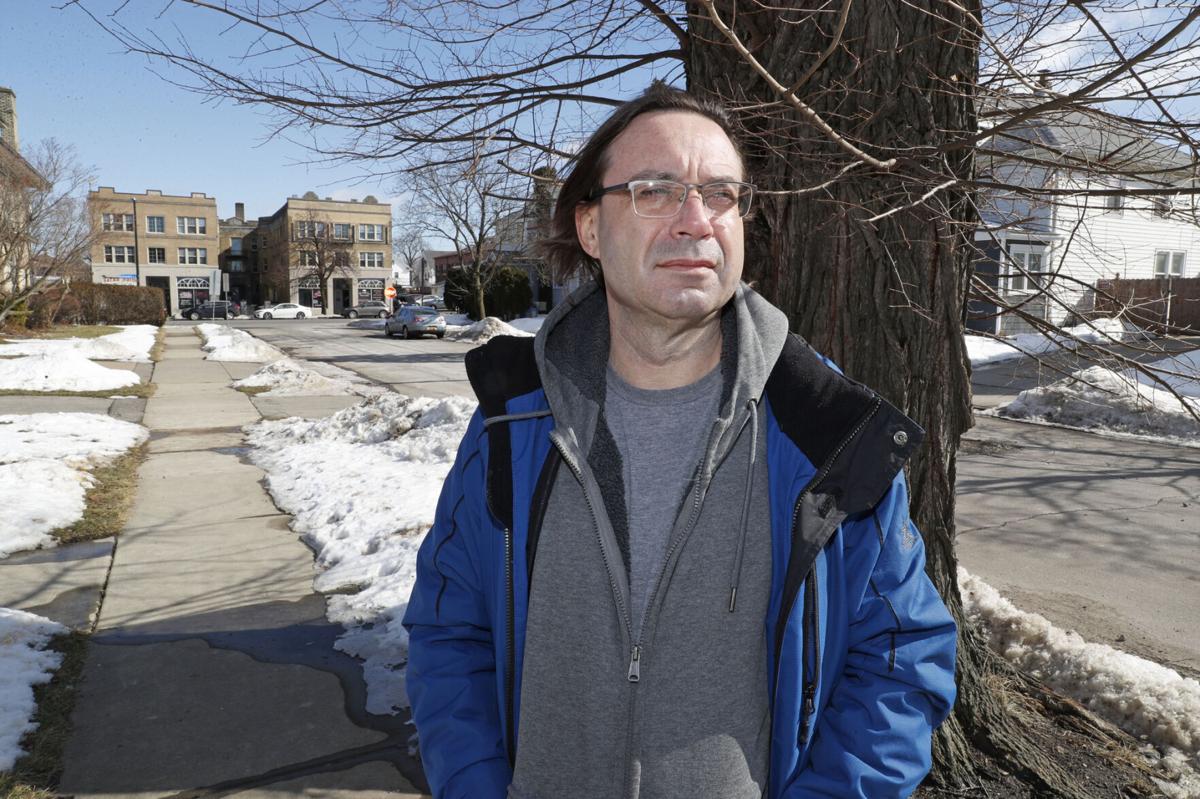 William Sutherland was released Feb. 18 from the Buffalo Psychiatric Center after 20 years of confinement following his plea to an arson charge of "not responsible by reason of mental illness" in October 2000. 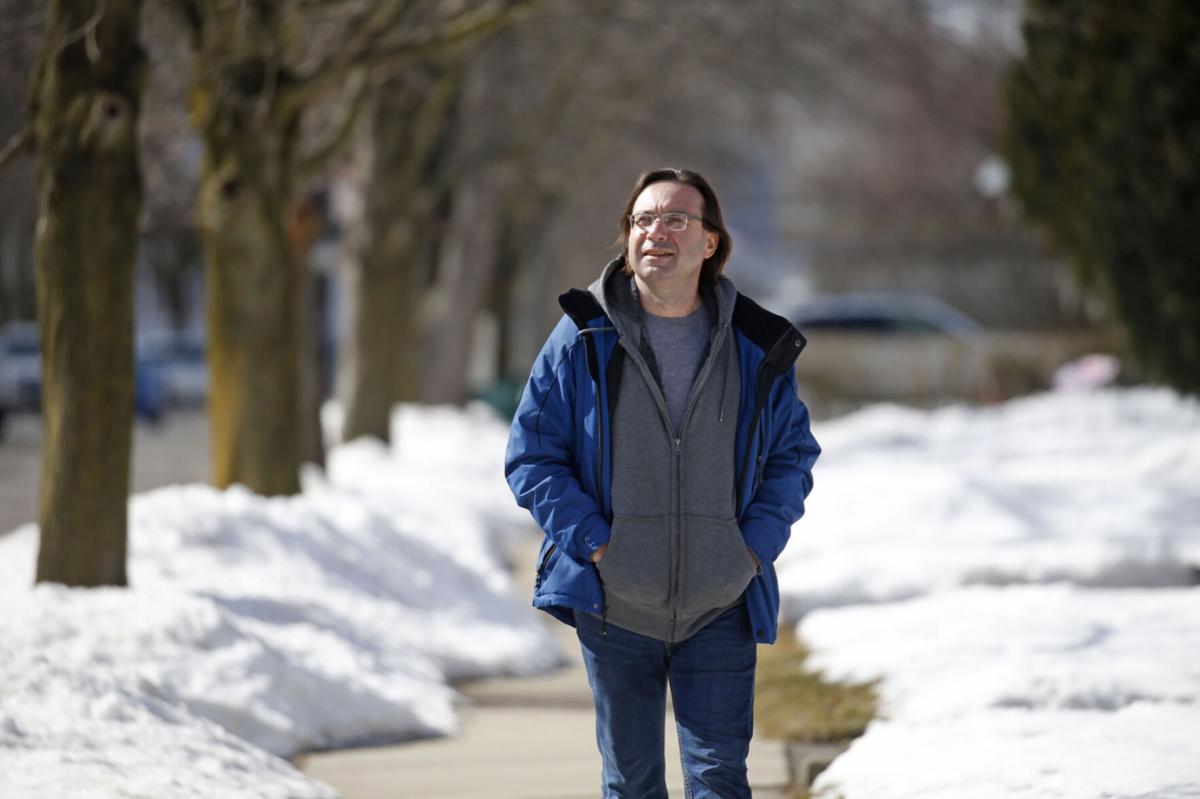 William Sutherland walks along a North Buffalo street, as he often does now that he's a free man.

It was a glorious day for William Sutherland.

He walked for hours around North Buffalo on a sunny Feb. 21, gazing at beautiful old homes, watching kids at Delaware Park sledding and skating, and finally strolling over to a Hertel Avenue pizza shop for a slice that tasted like perfection.

That was the day it really hit him – the realization that, after more than 20 years in confinement at the Buffalo Psychiatric Center and other state mental health facilities – he was a free man.

“I can’t tell you how good it felt, just to be able to walk over to Delaware Park, and just stand there, watching little kids have fun on the sledding hill,” Sutherland said. “It felt amazing.”

After a long legal battle, Sutherland, 55, was released from the psych center on Feb. 18. He is now an outpatient, still under supervision by state mental health officials, but living on his own in a small apartment on Delaware Avenue.

Sutherland had been confined in state psychiatric centers since October 2000, when he pleaded "not responsible by reason of mental illness" to a felony arson. Police said he started a March 2000 fire that caused $100,000 damage to an apartment building at 857 Delaware Ave., owned by businessman Carl Paladino. Fifteen people were in the building, but no one was hurt.

His “not responsible” plea enabled him to avoid prison, but a judge ordered him held in the custody of the state Office of Mental Health for at least six months. The six months turned into two decades.

To this day, Sutherland swears that someone drugged him the night of the fire and says he does not remember starting it.

“Taking that plea of ‘not responsible’ and going into the mental health system was the worst mistake I ever made in my life,” Sutherland said in an interview. “I think I would have been acquitted if I had gone to trial.”

And if he had been convicted of felony arson at trial – or pleaded guilty – Sutherland would probably have been released from prison 10 to 15 years ago, according to criminal justice experts who evaluated his case for The Buffalo News.

But for 20 years, the state Office of Mental Health refused to release him, saying he needed more treatment for anger management and other issues. On eight occasions – most recently last August – judges refused his appeals seeking release.

All that weighs heavily on Sutherland’s mind as he begins a new life outside the mental health care system.

“I’m anxious to start my new life, and excited about it,” Sutherland said. “My apartment is small, but I love it. I’m going to apply for social services, but I’m going to start working as soon as my treatment team allows me to do so. I want to work. I have a lot of experience working with computer software and I think I can help some small businesses.”

After fighting his requests for release for more than a decade, state officials suddenly changed course about five months ago and started making preparations for Sutherland to be released as an outpatient.

“It was weird. Not long after I lost my latest court decision, I started hearing that my treatment team was getting ready to request my release,” Sutherland said. “I have to think one reason for their action was that, in 20 years in the state system, I never physically harmed anyone.”

James Plastiras, spokesman for the state office, said the agency does not comment on issues involving particular patients. In response to questions from The News, he would only say that treatment plans for patients are determined by “the patient and their treatment team,” which is made up of medical professionals who understand the patient’s medical needs.

Although he said he appreciates his release, Sutherland does not have many complimentary things to say about his two decades in the state’s mental health system.

He said he saw too many patients being forced or pressured into “taking drugs that can harm them ... even kill them.” He also alleged that state officials are motivated by financial incentives to keep patients in psychiatric centers for long periods of time.

State officials have said it costs about $995 a day in taxpayer funds to care for a mental patient.

“The state should have released me many years ago, but decisions are made for financial reasons,” Sutherland said. “New York State government is a giant political patronage machine, and the mental health system is a part of that.”

Sutherland said there were “some very dark days, when I was forced to take medications, and I actually got down on my knees and prayed to God to take me.”

But he also said some of the doctors and staffers who treated him “genuinely cared about me” and helped him to become a better person.

“When I went into the system, I was an alcoholic and cocaine abuser. I was overweight and smoked two packs of cigarettes a day. I was like a low-budget version of the guy from ‘The Wolf of Wall Street,’ ” Sutherland said. “Now, as a human being, I’ve changed. I’m much more able to process emotions and handle life as it comes.”

He said he is researching a possible lawsuit against the state, alleging mistreatment in the mental health system and unfair treatment by the courts.

“Whether I get a nickel or a dime from the lawsuit is beyond my control,” Sutherland said. “But in some way, I’d like to be an advocate for the people in these mental health facilities. They need a voice.”

It was the eighth time William Sutherland's request for freedom was rejected by a judge.

A state judge has rejected a request to free William Sutherland, an arson suspect confined for more than 18 years in the state mental health

William Sutherland was released Feb. 18 from the Buffalo Psychiatric Center after 20 years of confinement following his plea to an arson charge of "not responsible by reason of mental illness" in October 2000.

William Sutherland walks along a North Buffalo street, as he often does now that he's a free man.