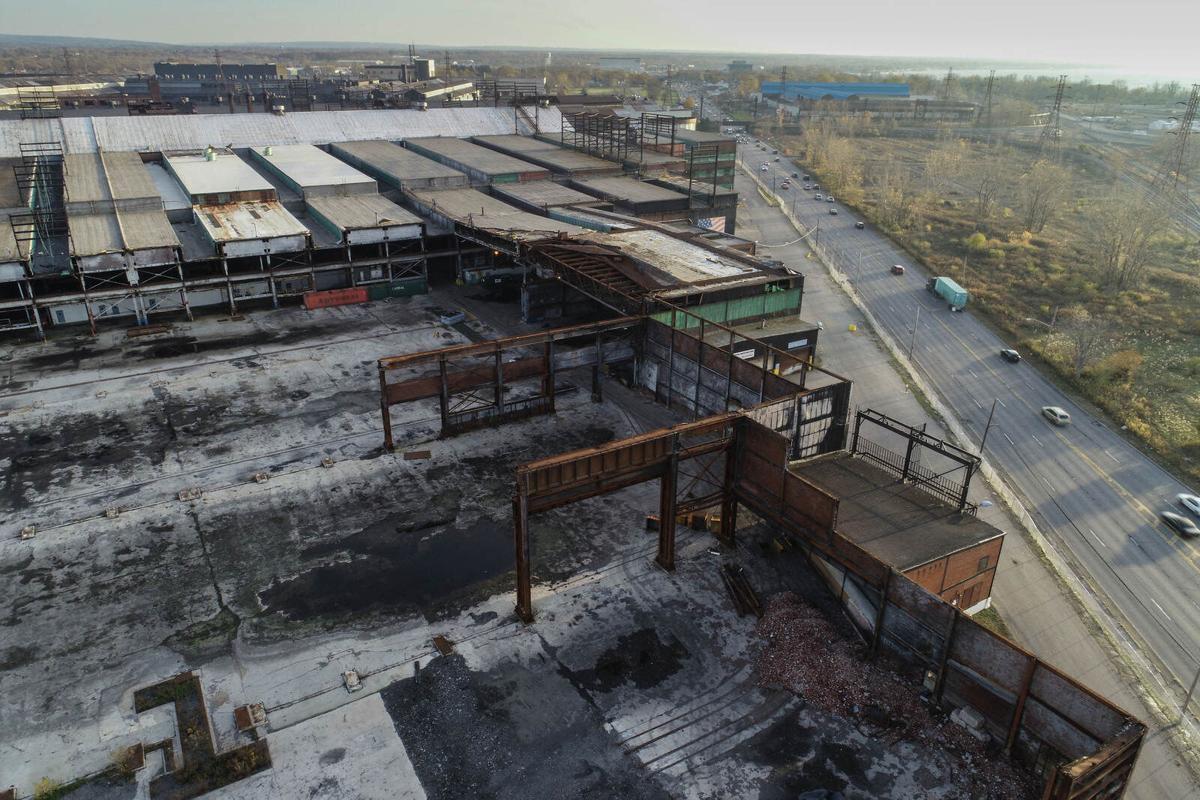 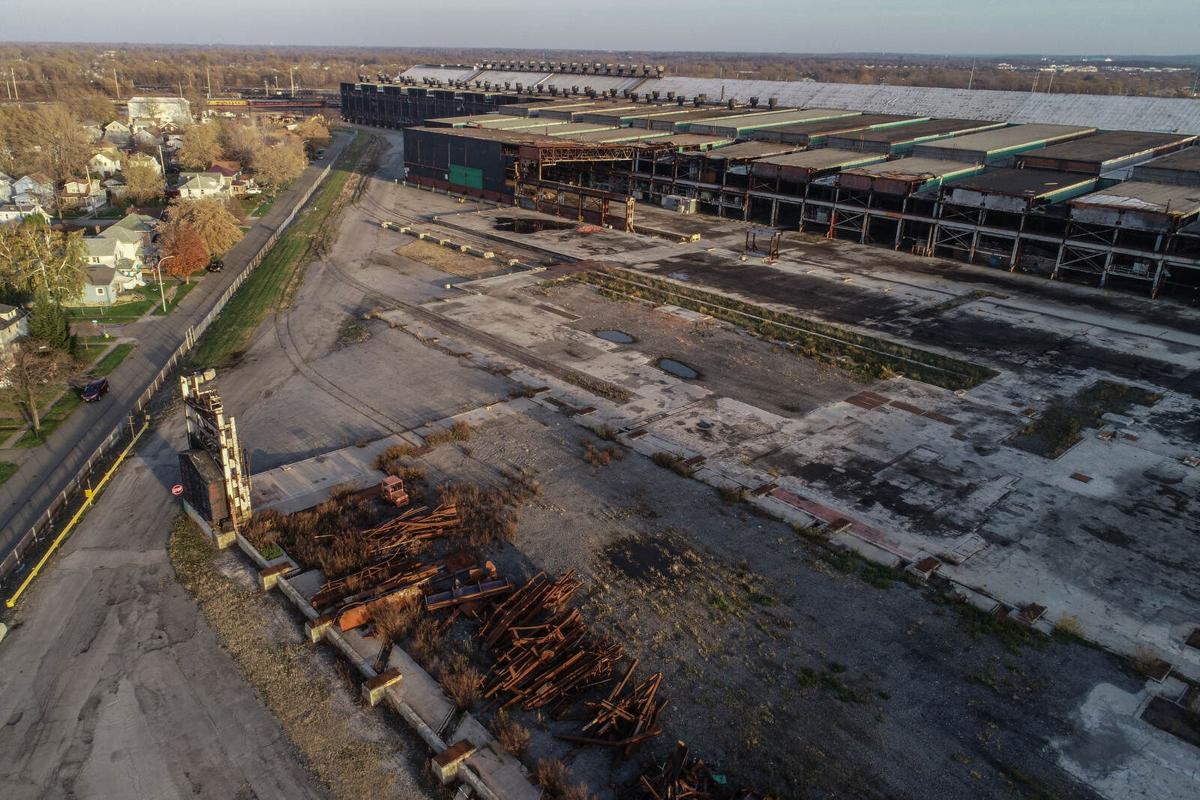 The Steel Works Industrial Park on the former Bethlehem Steel site in Lackawanna. 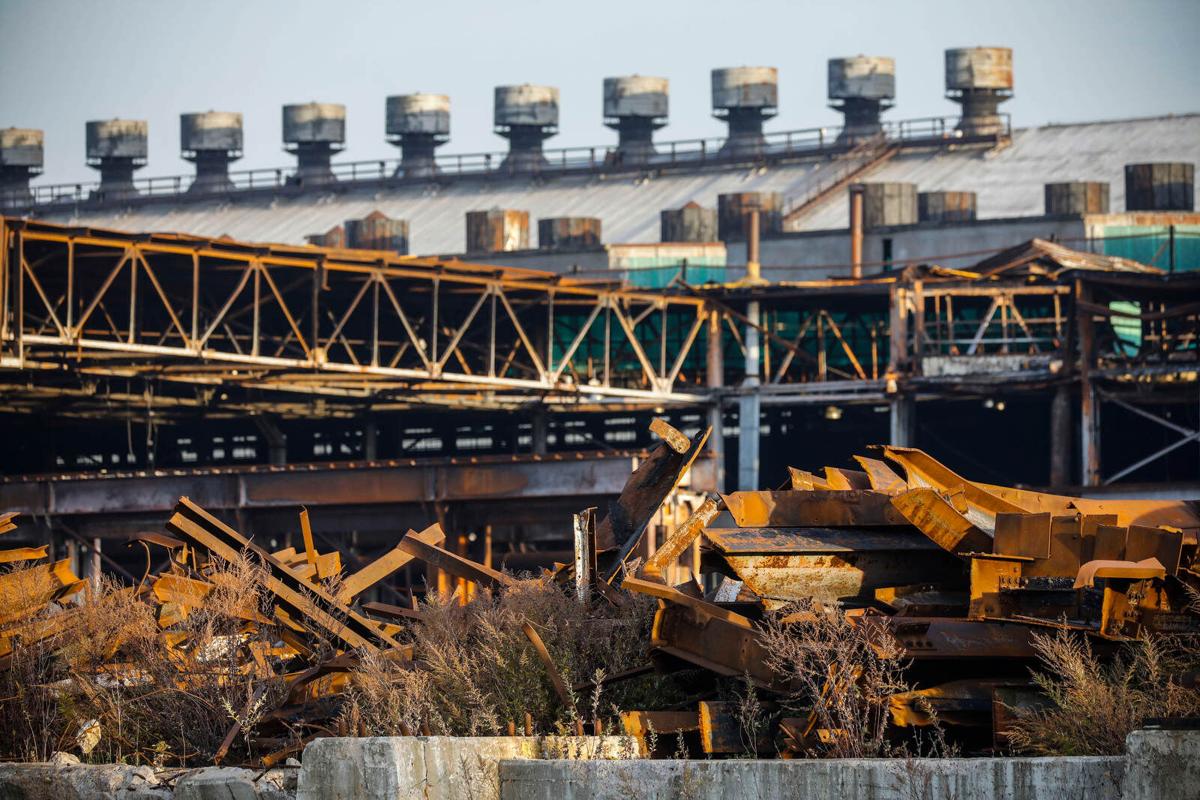 Billowing black smoke from the inferno at the former Bethlehem Steel plant in Lackawanna could be seen for miles from a fire that was so hot that 18-inch steel supports twisted and metal from cars inside melted and pooled on the floor.

The fire that burned for 10 days started Nov. 9, 2016, the day after the presidential election, and seemed to be a visual bookend to the plant that closed nearly 40 years ago.

But there is a new chapter coming for the property on Route 5. Great Lakes Industrial, which bought the property 10 years ago, is planning a 10-acre solar array on the now-empty concrete pad. It's another sign of recovery from the devastating closing of the plant.

"From Day One, it was always our interest to do everything we could to repurpose that old steel making facility, part of the heritage of Western New York, that so many of our relatives worked at or knew somebody who worked at," said Robert Zuchlewski, a partner in Great Lakes Industrial, the owner of the site for 10 years.

The fire started shortly after 7 a.m., as four workers at one of the companies on the site were having a meeting. They told investigators the fire was in a pile of stacked boxes that were filled with shredded plastic, and they tried to put it out with fire extinguishers.

Investigators suspect that hot shards from a broken industrial light ignited the boxes, but that could not be proven, according to the fire report. The cause remains undetermined.

The fire spread from the boxes and engulfed the structure, destroying cars, boats and recreational vehicles stored at Dr. Bob's Storage, causing the evacuation of 300 residents of the Bethlehem Park neighborhood. There was just one injury reported to one of the more than 100 firefighters from Lackawanna, Buffalo and Hamburg who battled the fire.

But what everyone remembers is the smoke.

"The smoke was as black as coal and it was just rolling, it was rolling up like you see waves coming in on the lake or on the ocean," said William Dailey. "You could tell it was bad."

Dailey has lived in Bethlehem Park for more than 40 years. The 86-year-old worked for Bethlehem Steel for five years in the 1960s, and he said it's still strange to see the big empty space where the building used to be. But the loss of the structure pales in comparison to the loss of the steel plant in 1982.

"The absence of the steel plant is kind of heartbreaking for me because I earned a lot of paychecks in that place and it got me started in my family and raising my family here," Dailey said. "That created a way of life here in Lackawanna for a lot of people."

The Lackawanna steel plant made iron and steel for 82 years, 60 of those under the banner of Bethlehem Steel. The steel mill provided good-paying jobs for high school graduates and dropouts alike. Employment peaked in 1965 at 20,000, with the company paying more than 75 percent of the taxes in Lackawanna, and a significant amount in nearby Hamburg,

There are more positive developments at the site of the former steel plant. New York State last month announced an agreement for the cleanup of 489 contaminated acres. The least-contaminated property is being transferred to county control. TMP, the maker of Magic Eraser cleaning products, is investing $22 million in a new plant and the Dona Street extension was finished over the summer.

"I expect to see another major application soon for another clean manufacturing site," said Lackawanna Development Director Richard Stanton. "The port on the Gateway property has been more active than it has been since the steel industry left."

Back on the other side of Route 5 at the property owned by Great Lakes Industrial, large photovoltaic panels that generate heat from the sun and turn it into energy will occupy the area lost in the fire, according to Zuchlewski.

The solar array would generate 2.4 megawatts of electricity, and he said it will be used at 500 Seneca St. in Buffalo, a mixed-use commercial building partially owned by partners of Great Lakes. The company hopes to gain approval and begin installation in early 2021.

The company owns about 1 million square feet on 76 acres at the former Bethlehem Steel site. Nearly half of its property was lost in the fire, but 11 tenants remain, operating a variety of light industrial businesses and storage, Zuchlewski said.

It took months to clean up the rubble from the fire.

"When people drive by now, it may not look like there’s much activity at that facility, there actually is quite a bit that happens inside," Zuchlewski said.

A brick wall facing Route 5 remains from the fire, and when construction of the solar array begins, the company would remove the end wall, he said.

Meanwhile, Great Lakes is seeking to lower its $3.5 million assessment to $2 million.

The cost of the cleanup was "significant," Zuchlewski said, declining to be more specific. He said the solar initiative will cost more than $3 million.

Great Lakes also plans to repurpose the old water filtration plant and the box annealing bay to make them business-ready. A 6,000-square-foot warehouse and five acres of yard space and a 50,000 square-foot area will get roof and utility improvements, Zuchlewski said.

"It’s a piece of property that most Western New Yorkers know and we think it's important to preserve it and improve it for the next stage of its life," he said.

"With Tesla’s RiverBend plant not far away, it is fitting and useful that the site of the former steel plant is focusing, at least in part on renewable energy," writes The News' Editorial Board.

The massive blaze that started early Wednesday at the former Bethlehem Steel plant off Route 5 is still burning, and the road will be closed until Thursday

“My house smells of rubber and plastic. I can’t get the smell to escape, because I can’t open any windows or

The Steel Works Industrial Park on the former Bethlehem Steel site in Lackawanna. 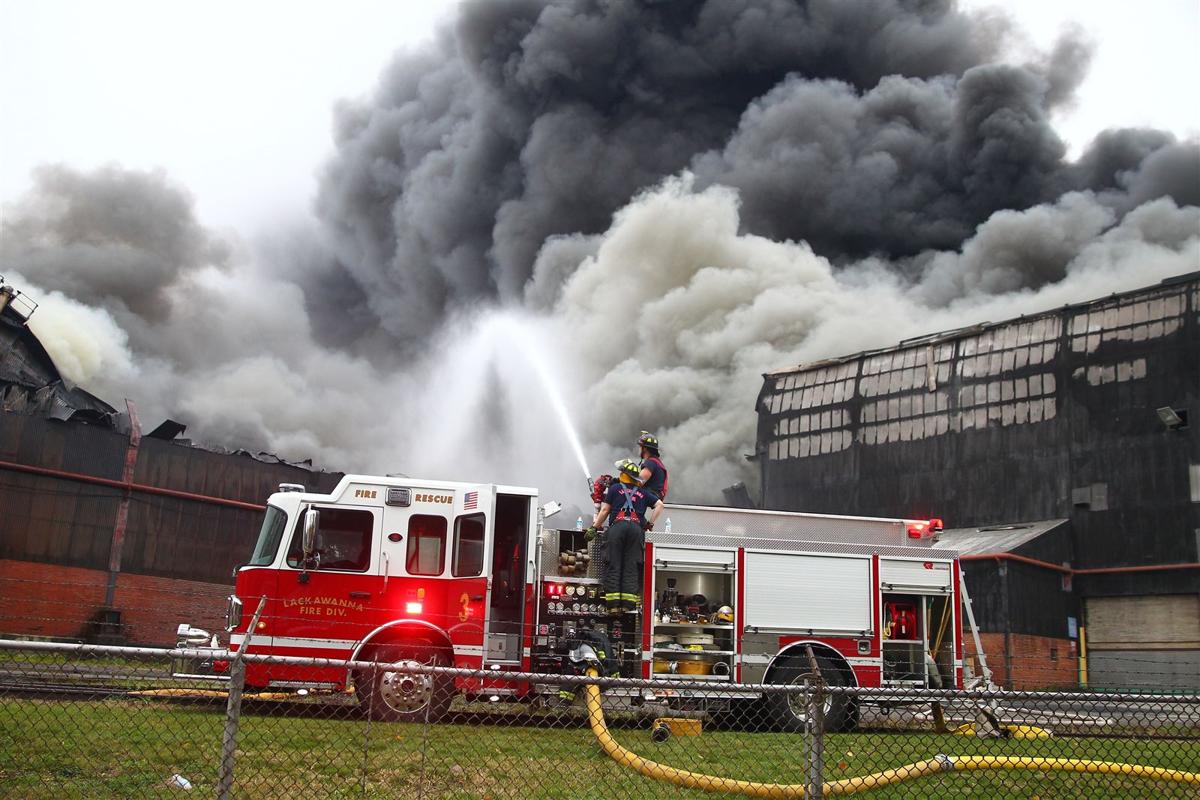 A fire rages at the former Bethlehem Steel plant along Route 5 in Lackawanna in 2016. 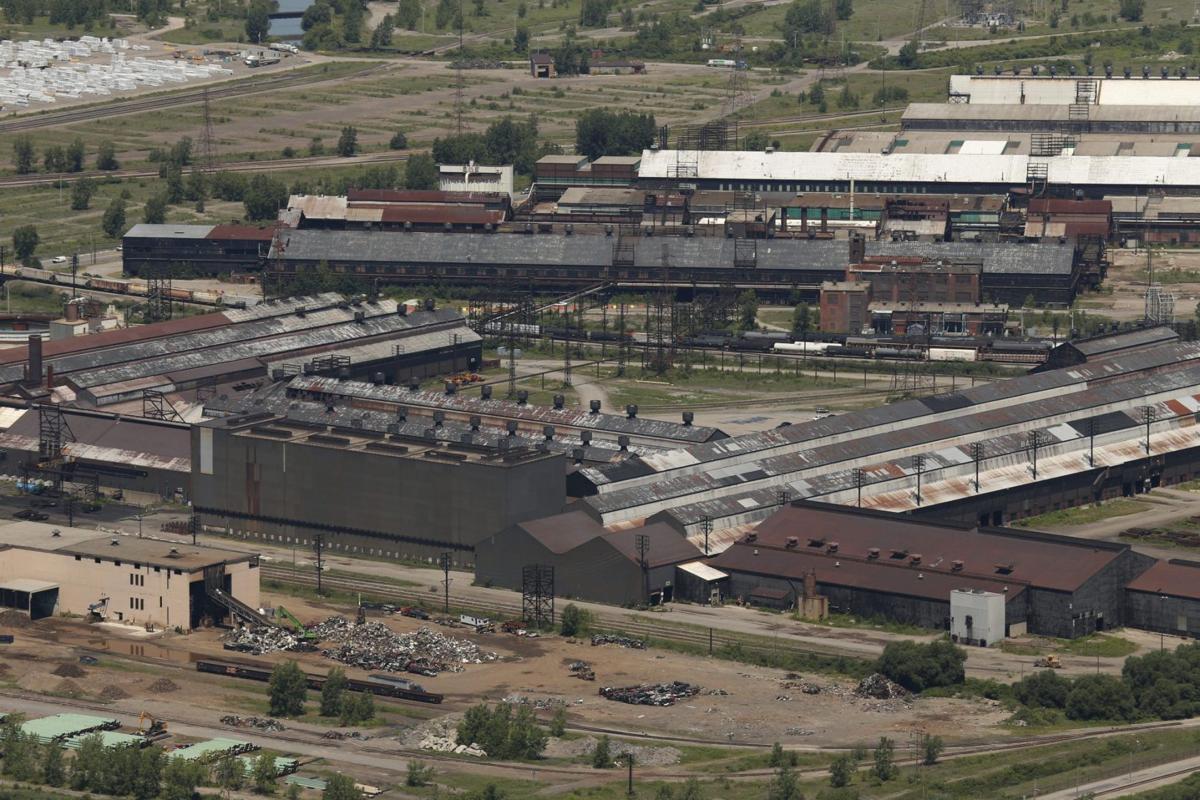 A 2014 file photo of the Bethlehem Steel site in Lackawanna.