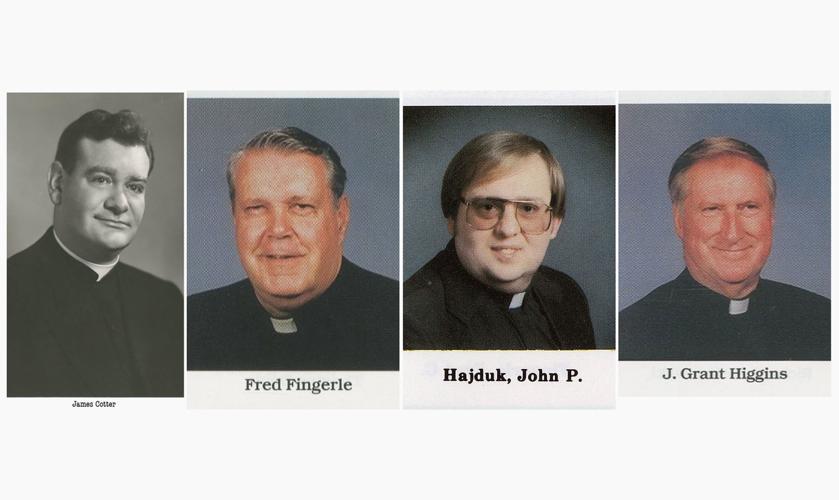 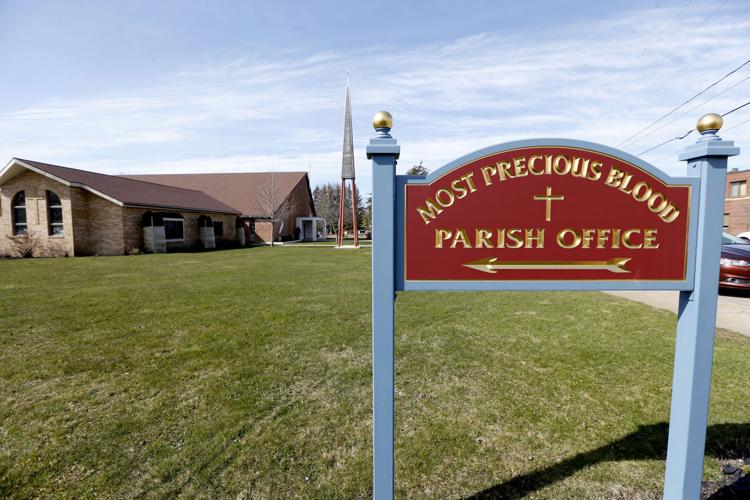 The current pastor at Most Precious Blood Church in Angola, XXXX, said he has not talked from the pulpit about the four priests accused of molesting children who were assigned to the church in the past. (Robert Kirkham/Buffalo News) 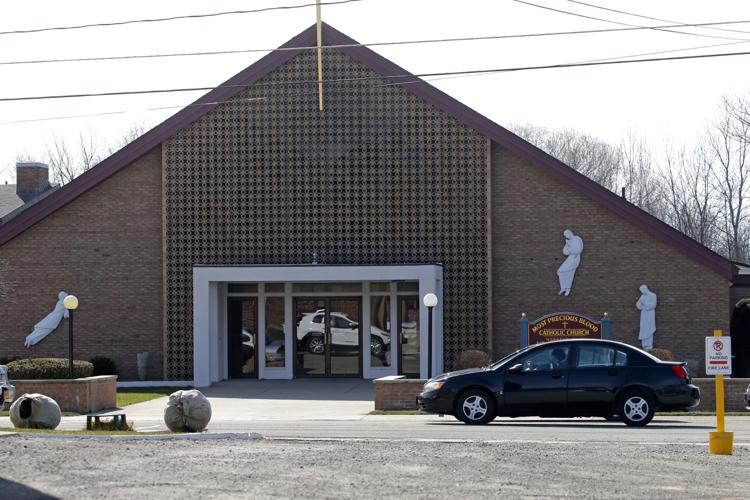 Most Precious Blood Church in Angola had four Catholic priests assigned there who were later accused of molesting children. The church's program to compensate victims is shrouded in secrecy. (Robert Kirkham/Buffalo News)

Members of Most Precious Blood Church in Angola were as stunned as any Catholics – and maybe more so – when the Diocese of Buffalo in March publicly named 42 priests who had been accused of child sex abuse.

The list released by Bishop Richard J. Malone included not just one priest who served in the village parish, but four. Parishioners had no idea.

What also set Most Precious Blood apart from other parishes was the span in which one accused priest after another worked in the parish for nearly 30 consecutive years.

The fourth accused priest was the Rev. James H. Cotter, assigned to Most Precious Blood from 1955 to 1958.

The 42 accused priests on the diocesan list served in more than 150 parishes across Western New York, according to a Buffalo News analysis of official diocesan directories, which list where clergy were assigned by year.

Six parishes besides Most Precious Blood also had at least four of the accused priests assigned to them at some point. And two parishes – St. John the Evangelist in Buffalo and St. Mary of the Assumption in Lancaster – hosted at least five accused priests.

Reck and other attorneys said it was no surprise to see the Buffalo Diocese had assigned multiple abusive priests to a parish.

"It's not unusual. I've had cases where there was more than one abuser at a parish at the same time," said Mitchell Garabedian, who has represented thousands of victims of clergy sex abuse. "The supervisors are ignoring the sexual abuse and allowing it to happen. It's also indicative of how much sexual abuse has permeated the Catholic Church."

Reck said he represents two clients who accused Fingerle of sexual abuse. His clients have told him their abuse happened when Fingerle was assigned to parishes other than Most Precious Blood.

It's not clear if Fingerle or the other priests were accused of abusing any children from Most Precious Blood parish. The diocese released only a list of names of accused priests and gave no details about the allegations against each priest.

Erickson, a Town of Evans resident,  remembers all of the priests from Most Precious Blood on the list of accused priests.

"I was certainly shocked by some of them, and not shocked by one," she said.

Erickson and her husband raised eight children – six boys, two girls – all of whom went to Most Precious Blood School.  The priest she wasn't shocked to see on the list was Hajduk.

Erickson said she personally complained to the diocese about the priest on behalf of other parents who were concerned with Hajduk's behavior around children. Erickson remembers the priest using curse words and foul language and taking kids to see R-rated movies. Maybe six months after she spoke with diocesan officials, Hajduk was moved out of the parish, recalled Erickson.

Erickson said she didn't know back then if anyone accused Hajduk of sexual abuse and still doesn't know if any abuse happened during his stint at Most Precious Blood.

Nonetheless, she said, "He wasn't a role model for children."

After Most Precious Blood, the diocese sent Hajduk to Holy Family Church in Buffalo, where he spent seven years before being appointed pastor of St. Mary parish in Cattaraugus in 1991. After 1994, he no longer assigned to parishes, according to the diocesan directories.

Hajduk, 68, is the only one of the four accused priests from Most Precious Blood who is still alive. He lives in a skilled nursing facility in Alexandria, Va., according to a search of public records. He could not be reached by telephone to comment.

In hindsight, some Most Precious Blood parishioners said they now recognize that Higgins might have been too chummy with altar boys. Some of the altar boys regularly visited him at the rectory. Higgins also was known to take altar boys on camping trips, said some parishioners. And his departure from the parish in 1997 was sudden and not fully explained, they said.

Some parishioners said they were still coming to grips with the extent of the abuse in the diocese, and possibly in their own parish.

"It's dark days, for me anyway. I'm sad about it," said Mary Lou McEvoy, a parishioner for about 40 years who serves as the parish bookkeeper. "But let's get through it, like everything else."

Erickson said she was appalled that the abuse went on for so long and that priests were moved from parish to parish in an effort to shield problems from church goers.

"The magnitude of this being hidden for so long is really the issue," she said. "Unfortunately, it is testing peoples' faith."

Erickson, a former member of the Evans town board whose family runs the popular Connors Hot Dog stand in town, is glad the church's unseemly secrets are finally out in the open.

"Nobody likes to see their dirty laundry spread across the front page, but sometimes that's what you need to get it clean," she said.

Her own faith, she added, remains intact. And she hopes her fellow Catholics will get beyond their disgust for what happened.

"All you can do is move on. Anything horrible in life you can never go back, you can only move forward," she said.

Most Precious Blood parish, often called "MPB," dates back to 1871. The current diocesan directory lists 1,000 families in the parish, down from 1,450 families in 1988. The church has been located since 1962 on Prospect Street, outside the village business district, and for many years operated a school.

The diocese shut down the school in 2007 due to declining enrollments, a move that prompted some families to leave the parish. But many families have remained in the parish for decades. The parish motto is, "Let us do little things with great love." Its hallmark ministries include hosting an ecumenical food pantry and providing funeral brunches in the parish hall for grieving families.

[You asked, we answered: Why aren't accused priests in jail?]

On one hand, parishioners were looking to put the awful past behind them.

"To me, it's water under the bridge. They're gone," said Spencer Vail, president of the parish council and longtime parishioner.

At the same time, Vail has some nagging questions about what happened.

"I was kind of shocked that they would send someone like that out to a place with a school. Did they know when they sent them here or didn't they?" he said.

Other parishioners wanted more clarity, too. "How do we know the accusations were made while they were here?" asked McEvoy.

During his career, Cotter had four other parish assignments besides Most Precious Blood; Fingerle six; Hajduk three; and Higgins four.

But Garabadian, the attorney from Boston, Mass., said some priests tend to have many victims, in multiple parishes.

"A pedophile priest who is enabled by a supervisor sexually molests as many children as he can get his hands on," said Garabedian. "It's not uncommon for each priest to have abused hundreds upon hundreds of children while supervisors turned their backs."

Some parishioners at Most Precious Blood still have a hard time believing priests assigned there committed such misdeeds, and others simply aren't interested in discussing their thoughts and feelings on the abuse scandal, McEvoy said.

The current pastor, the Rev. John S. Kwiecien, has steered clear of raising the issue in Masses. He said parishioners haven't expressed too much to him beyond the shock of the initial disclosure of the four priests connected to the parish.

The revelations have been personally painful for Kwiecien, who said he felt "betrayed" by colleague clergy who harmed children.

"What was going on in these guys' minds?" he said.

While Kwiecien said he hasn't sensed any negative vibes from parishioners at Most Precious Blood, the allegations of abuse against other priests have left him wondering how he's viewed by the broader public.

"Not just me, but priests in general," he said. "They put a stain on all of us."

Kwiecien said he has no knowledge of the accusations against the priests who preceded him at Most Precious Blood, beyond what a victim of clergy abuse told him in a brief meeting at the rectory recently.

Kwiecien had never seen the man before, but he was probably in his 40s. The man didn't identify who had abused him as a child. He had simply stopped by to speak with a priest. He spent less than 30 minutes chatting with Kwiecien.

"He just wanted acknowledgment," said Kwiecien. "It wasn't so much anything I could say. It was just that I was willing to listen and not shut the door on him."

A jury awarded $3.9 million to Jazmon Morrison, who suffered a traumatic brain injury and bulging disc after slipping on a floor at Williamsville Suburban Safire Nursing and Rehabilitation Center.

Rod Watson: Rocker with racist rhetoric? After May 14, Ted Nugent is the last thing WNY needs

"Now is not the time to bring in a septuagenarian rock star with a megaphone who doesn’t even believe systemic racism exists," Watson writes.

A crane operator died following an incident at or near the Mid River Marina in the Town of Tonawanda, a National Grid spokesperson said Wednesday afternoon.

Pioneer Central School Board members and Superintendent Benjamin A. Halsey, who has been on paid administrative leave since June 3, officially parted ways Thursday evening.

A lifelong vegan, actor Joaquin Phoenix stands in solidarity with the Newfane sanctuary owner who was arrested after she refused to return two cows that ended up on her property.

You don't have to look far to find people doing what at other times of the year sounds unthinkable: coming to Buffalo because of the weather.

Covid 'first-timers' are feeding surge, but with milder symptoms and fewer hospitalizations

In WNY and across the state, data shows more people are being diagnosed with the coronavirus for the first time than  people who have contracted the illness before and are getting it again.

Trustees voted 4-1 to get rid of the director of community development position, which was held by Keaton DePriest.

The current pastor at Most Precious Blood Church in Angola, XXXX, said he has not talked from the pulpit about the four priests accused of molesting children who were assigned to the church in the past. (Robert Kirkham/Buffalo News)

Most Precious Blood Church in Angola had four Catholic priests assigned there who were later accused of molesting children. The church's program to compensate victims is shrouded in secrecy. (Robert Kirkham/Buffalo News)