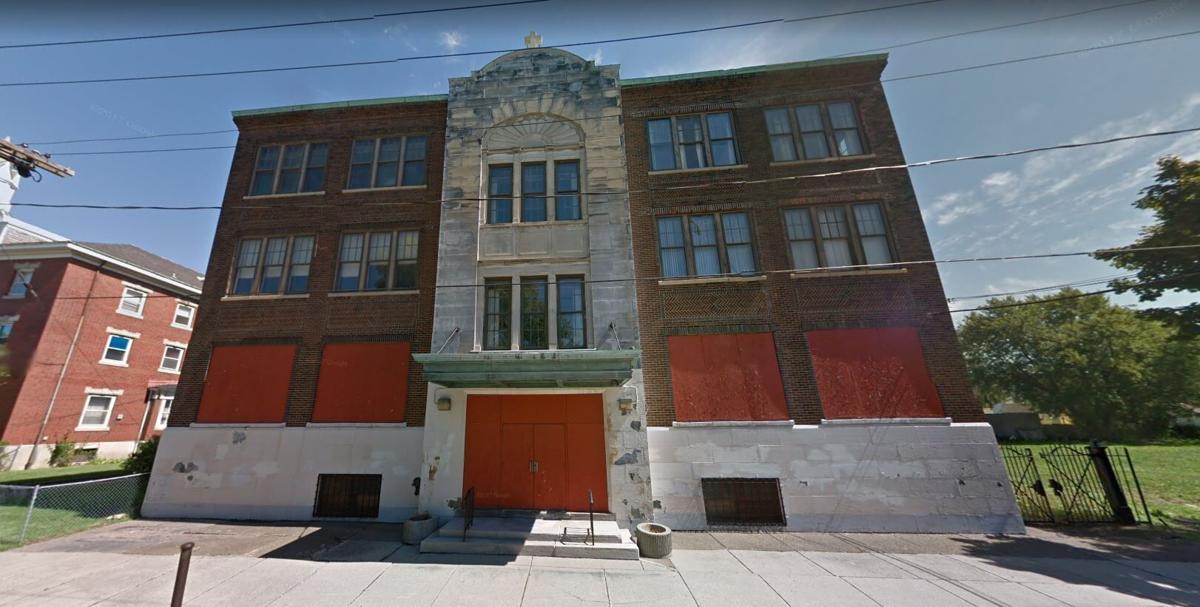 The former school or Lyceum building of St. John Kanty Church in the Broadway-Fillmore neighborhood. 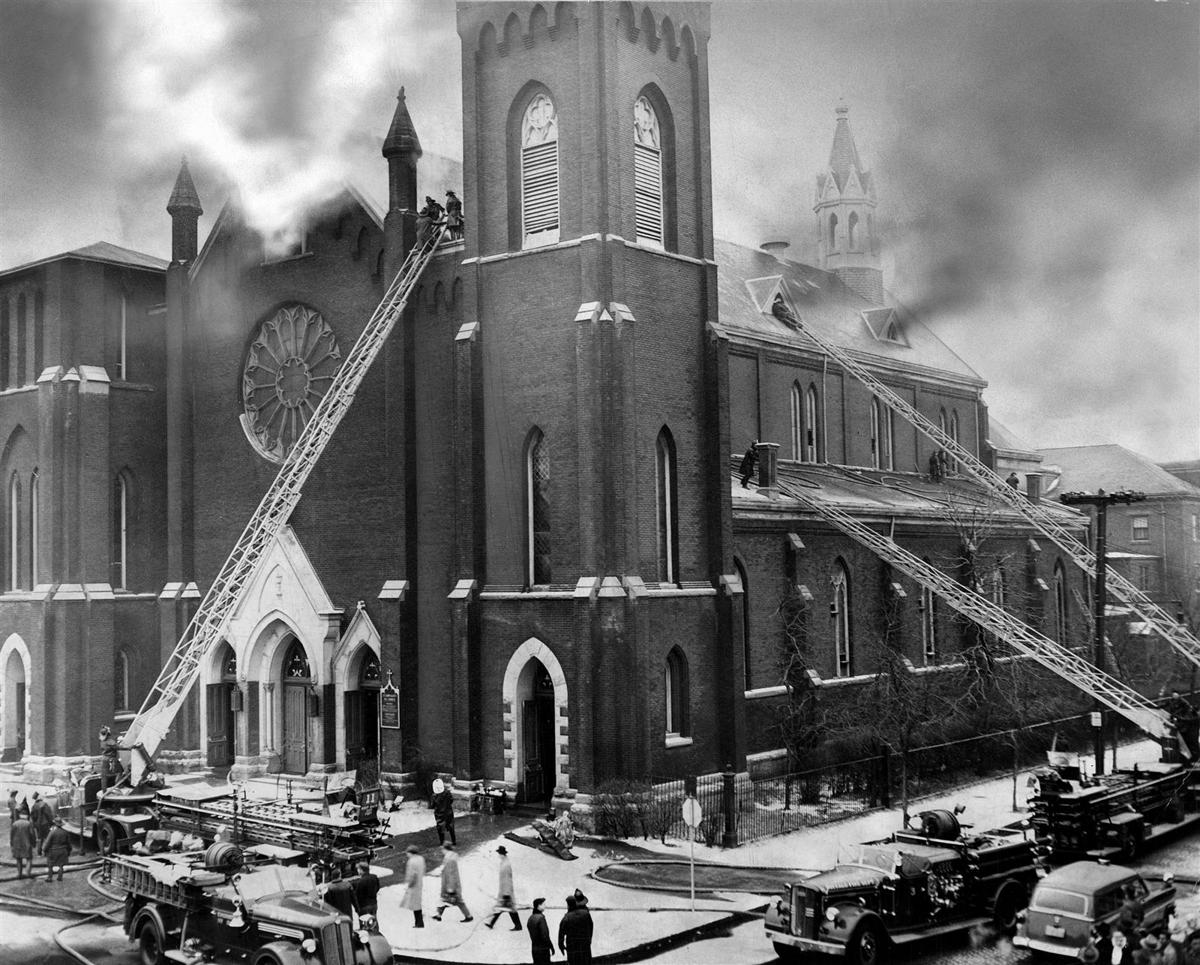 Attacking at several points, firefighters bring under control a blaze that heavily damaged St. John Kanty's Church shortly after it broke out, Jan. 13, 1955. The fire started in the altar on the right side of the main sanctuary. Heat burst 10 stained-glass windows. 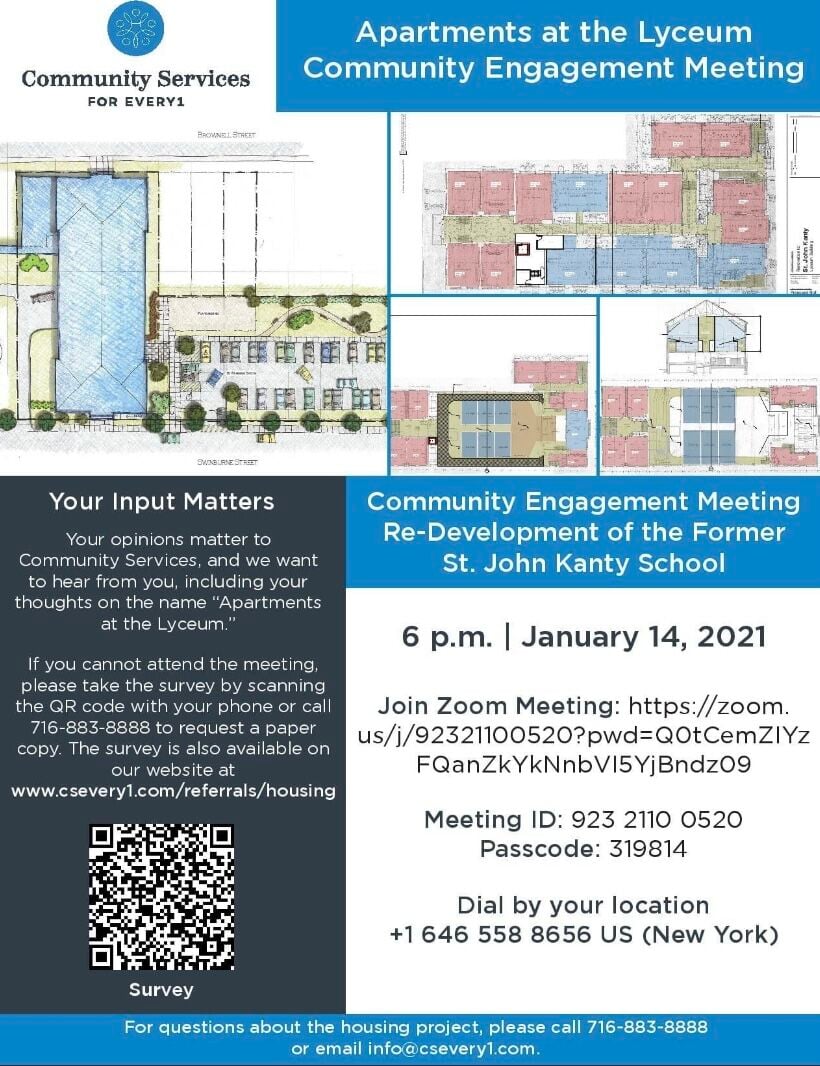 Community Services for Every1, together with Edgemere Development, wants to convert the academic building of St. John Kanty Roman Catholic Church – known as the Lyceum – into a mixed-use project for low-income residents.

The $18 million Apartments at the Lyceum project would create 26 one-bedroom and 11 two-bedroom apartments in the building at 101 Swinburne St., in the Broadway-Fillmore neighborhood.

According to a summary project brochure on the nonprofit's website, 12 apartments would be set aside as permanent supportive housing for survivors of domestic violence, with "flexible" services available to help them. Four units will be accessible for those with mobility impairments, while two would be designed for those with hearing or visual impairments.

The project is designed to address the city's "dire need for affordable housing," the group said in the project brochure. But the plans by Carmina Wood Morris PC also include "modest renovations" to the kitchen, cafeteria and gymnasium.

That would also give the social services agency – which is based downtown on Oak Street – a location for delivering services to East Side residents through community programming. That could include skills building, vocational training and recreational programs for youth.

It's also in an area targeted for revitalization, including through the state's new $50 million East Side Corridor Economic Development Fund and the East Side Avenues partnership. The project will include gardens, patios and playgrounds to beautify the surrounding neighborhood.

"This project could help save this portion of St. John Kanty's church, while providing housing and increasing those that live in Broadway-Fillmore," said Fillmore Common Councilmember Mitch Nowakowski.

The current building consists of two-story and four-story sections, with 69,280 square feet of space on two-thirds of an acre of land. It now has classrooms, offices and the auditorium with a stage on the upper floor.

The project came in response to a request for proposals issued by the church in October 2019, seeking a buyer to redevelop the building, which has been "severely underutilized" for over 30 years, according to the nonprofit's brochure. That's when it ceased operating as a school.

Constructed from 1930 to 1933, the Lyceum is located behind the church, rectory and parish center, near Broadway. It functioned as a neighborhood community center, and included a main hall that could hold 2,000 people for concerts, movies, dances, plays and meetings, as well as classrooms, six bowling alleys, club rooms, meeting rooms and the gym.

It also served adults and teachers in the 1930s, and was renovated in 1967 into a new school building. It later also housed a senior citizens community center and a dining room to "feed the poor and hungry of the area." In 1990, St. John Kanty School merged with five other parish schools, and the building was emptied.

It was briefly leased to the city school district for use as an elementary school in the mid-1990s, and about 10% of the building has been used annually by St. Luke's Mission of Mercy. The church also continued to use the building for events and functions, but most of it remains vacant, so the church decided two years ago to seek a buyer, according to the church website.

Various developers, architects and other organizations toured the site before St. John Kanty chose Community Services for Every1. Proceeds from the sale will benefit the church, which also reached an agreement with the social services agency for access to the commercial kitchen.

Gecko's seeks major expansion on Hertel; other city projects up for review

Gecko's Bar & Grille wants to bring a whole new look to a corner of Hertel Avenue.

When Frank Chinnici proposed his University Place @ LaSalle student housing project more than eight years ago, the developer planned to put up…

Religious services offered inside empty sanctuary halls for online audiences. Memorial services canceled or scaled back. Bar and bat mitzvah ceremonies with only immediate family allowed to attend. As the growing threat of the novel coronavirus upends every aspect of daily life, religious institutions also are adapting to this new reality. “In our minds, it’s morally imperative to say,

Michael Tatu felt some relief 51 years ago when the Rev. Norbert F. Orsolits was transferred from St. John the Evangelist Church. Tatu said he grew fearful of Orsolits after the priest molested him at a drive-in theater when he was 14. But the priest who replaced Orsolits, the Rev. William F. J. White, turned out to be no

Buffalo Diocese removed the Rev. Norbert Orsolits from a South Buffalo parish in 1968 after parents complained he had molested their 14-year-old son. He wound up in another parish, and several lawsuits allege he molested other

After a statue of Mary was vandalized outside an East Side church overnight, church officials are vowing to have it

Grandmother's recipe for pierogi carries memories by the mouthful

This article was originally published in the print publication of The Buffalo News on Dec. 24, 2008 For years, it was a scribble in the back of a spiral-bound schoolgirl’s notebook. “Pierogi,” the title read, and then a brief recipe, just a few lines long. Nothing more, nothing less. How it got there, that little recipe, is a longer

The former school or Lyceum building of St. John Kanty Church in the Broadway-Fillmore neighborhood.

Attacking at several points, firefighters bring under control a blaze that heavily damaged St. John Kanty's Church shortly after it broke out, Jan. 13, 1955. The fire started in the altar on the right side of the main sanctuary. Heat burst 10 stained-glass windows.