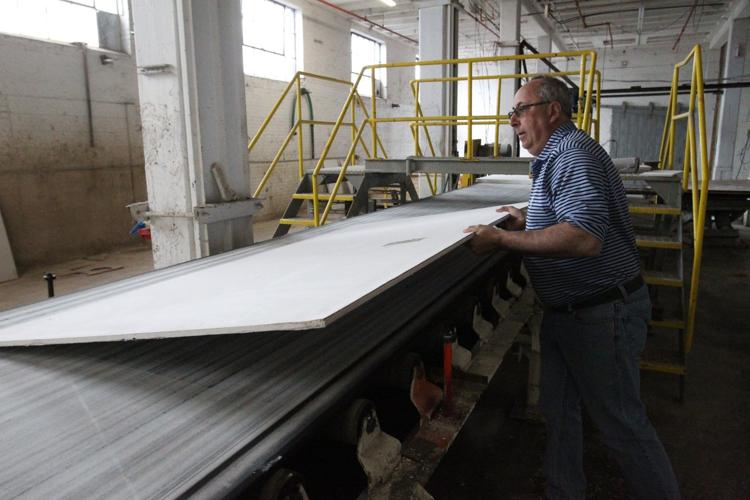 Ronald J. Voit invented Forever Board, a dry wall building material that he is marketing as an alternative to gypsum boards. 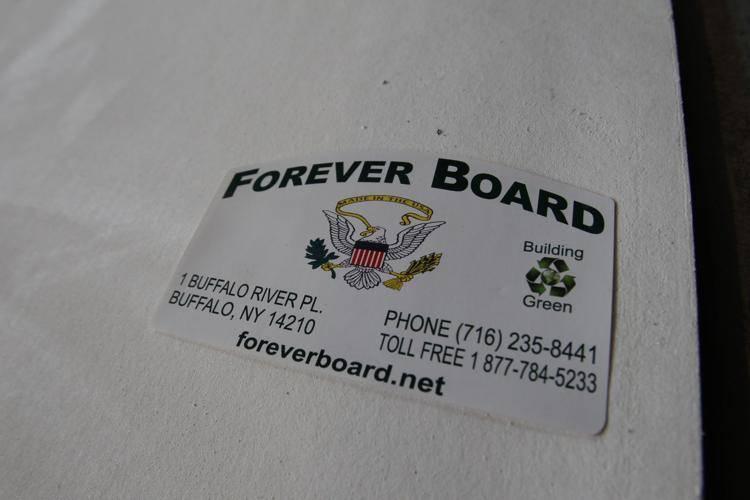 Support this work for $1 a month
By Matt Glynn

But he remains undaunted about bringing a mold-resistant alternative called Forever Board to the market.

“It’s just a matter of getting everybody familiar with the product,” Voit said of his invention.

Buffalo is the hub for his hopes. A few years ago, Voit bought a vacant factory near the Buffalo River in South Buffalo and moved in production equipment he acquired from a defunct plant in Ohio.

Now Voit has launched manufacturing, aiming to get his product used in commercial and residential projects. Voit said he uses a proprietary process to strengthen the chemical bonds in production of his magnesium oxide boards. “I use the Coca-Cola, Kentucky Fried Chicken theory: Nobody knows my secret recipe, not even my investors,” he said.

Voit said the concept for Forever Board came to him during his career in the building industry. He wanted a product with mass-market appeal, and Forever Board fit his criteria. He said it is suitable for homes and apartment buildings, among other applications.

For almost a decade, Voit toiled on the side at perfecting the product, establishing his company in 2009. Early on, he used his dining room as a makeshift laboratory as he worked through his ideas.

Now that he has a factory, equipment and a handful of investors, Voit’s mission is to make inroads in an industry where gypsum board is king. The Gypsum Association, a trade group, says that U.S. manufacturers last year shipped more than 20.5 billion square feet of gypsum board and that sales exceeded $3 billion.

Voit says his product is resistant to moisture, mold, mildew and fire. He also says it is lighter weight and easier for installers to cut and hang.

“He’s got a very excellent product that is much needed in the industry today,” said Al Mejac, an engineer and manufacturing sector veteran who is also an investor in Forever Board. “There are a many people that are interested in this particular board. It’s just a matter of time.”

John Malec, vice president of Gypsum Wholesalers in Syracuse, said he is intrigued by Voit’s invention and likes the idea of having another product for his customers to choose from if it catches on. He said his company could be a future distributor of Forever Board, depending on how things go.

One of Voit’s tasks is to explain to the marketplace how his product is different from what is currently available, Malec said. “With a new product like this, there’s going to be a little learning curve for people who aren’t familiar with it.”

For instance, Malec said, architects will need to feel confident in the product before they will recommend it for use on a project.

With the annual market for wallboard in the United States at several billion dollars, “Forever Board needs only to capture a tiny percentage of that business to be hugely successful,” he said. “Ron does not need to be all things to all people in the construction arena.”

As any entrepreneur knows, developing a new product is one thing; gaining acceptance of it and making sales is quite another. Voit said he is getting the word out to everyone from sales reps and architects to developers and construction companies. He is also getting lots of inquiries from people he did not reach out to, who are hearing about his product in industry circles.

Forever Board has begun filling its first orders, for one home each in Connecticut and New York City. Voit said he is working on firming up an order for a new apartment building in New Jersey.

Voit said he sees great potential for his product, beyond niche-market status. He is exploring a possible licensing agreement with a much-larger company but declined to share details until something is finalized.

Forever Board has only a handful of employees now, but Voit intends to add jobs as production picks up. With his single production line, he has the capacity to churn out 50,000 boards a week. There is room to add another line inside the factory if demand warrants.

“It’s a matter of just gradually growing, a controlled growth,” he said. “If we take on too many jobs, we’re going to bury ourselves and get hurt.”

The Niagara Town Board voted in favor of a 27-page "negative declaration" that no potentially significant environmental impact would stem from the proposed $300 million project.

This car-bike hybrid could be the future of city travel

This car-bike hybrid could be the future of city travel

Ronald J. Voit invented Forever Board, a dry wall building material that he is marketing as an alternative to gypsum boards.