Forest Lawn, SPCA to find non-lethal way to deal with deer-killing coyote
0 comments
Share this
1 of 2 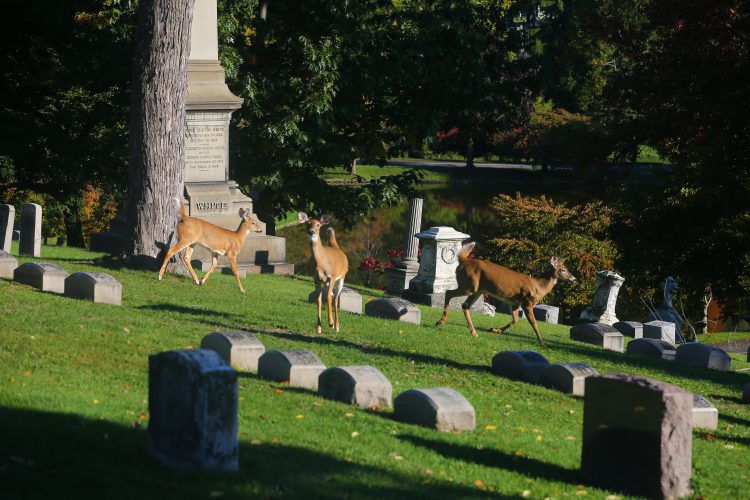 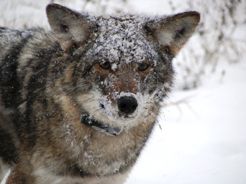 An eastern coyote. (Photo courtesy of the NYS DEC)

A coyote that slipped inside the gates of Forest Lawn's bucolic urban burial ground this fall killed a litter of fawns to a resident family of deer.

A coyote also chased at least two people visiting the cemetery, according to state Department of Environmental Conservation reports.

“The coyote that has been seen on the grounds of Forest Lawn needs to be removed,” Forest Lawn posted on its Facebook page Tuesday.

After the reports of a coyote chasing people, the state Department of Environmental Conservation issued the cemetery a permit to kill the animal.

“These incidents demonstrated that the coyote is exhibiting aggressive behavior and likely habituated to humans,” the DEC said in a statement. “While most coyotes avoid interacting with people, some coyotes may become emboldened and lost their fear of people, which can result in a dangerous situation.”

But on Wednesday, after word got out that the DEC authorized Forest Lawn to trap and kill the animal, the SPCA Serving Erie County offered the cemetery its assistance in finding suitable alternatives.

After cemetery officials spoke with the SPCA, the swivel leg hold traps placed in the cemetery for the coyote were removed Wednesday, said cemetery spokesman Mark DePalma.

“No coyotes were ever caught or euthanized,” DePalma said in a statement posted to Forest Lawn's Facebook page.

DePalma said the coyote was observed at several places in the cemetery. The most recent sighting was Tuesday.

Browning said the SPCA and Forest Lawn officials will meet next week and figure out what to do.

DePalma said that "it won't include trapping."

Some of the alternatives include modifying habitat inside the 269-acre cemetery and controlling food sources there, including a rampant feral cat population, and talking about a co-existence plan for the coyote on grounds that also boast not just deer but hawks, owls, herons, squirrels and myriad other wildlife.

Are birdwatchers to blame for owl's death at Forest Lawn?

The eastern coyote is “firmly established” statewide, including in urban areas and the suburbs, the DEC said.

“The irony is that signs of coyotes at Forest Lawn are signs of a very healthy ecosystem,” Browning said. “The fact that coyotes are even there shows that Forest Lawn is a thriving wildlife habitat.”

Browning added: “We would like it if it was Disney and all the creatures could live compatibly together. But, that’s not realistic.”

There’s no way to say whether it’s a lone coyote in Forest Lawn.

Typically, where one coyote is spotted, there’s at least one more as part of a breeding pair – plus any of their offspring, Browning said.

Coyotes are naturally afraid of humans. They can become tolerant of people in more densely populated areas, but dangerous situations can arise if they lose their wariness, the DEC said.

If a coyote is spotted and seems to linger after encountering a human, the person spotting it should "be aggressive" by making loud noises, waving their arms and throw sticks or stones to scare it away, the DEC recommends.

Browning said eliminating the coyote at Forest Lawn would provide short-term relief, it could just exacerbate the problem in the long run.

Still, the SPCA doesn’t fault Forest Lawn for seeking the DEC’s help in eliminating the coyote the way they did – especially after the reports about possible aggressive behavior toward their visitors.

“They were doing what they thought was the responsible thing to do,” Browning said.

An eastern coyote. (Photo courtesy of the NYS DEC)