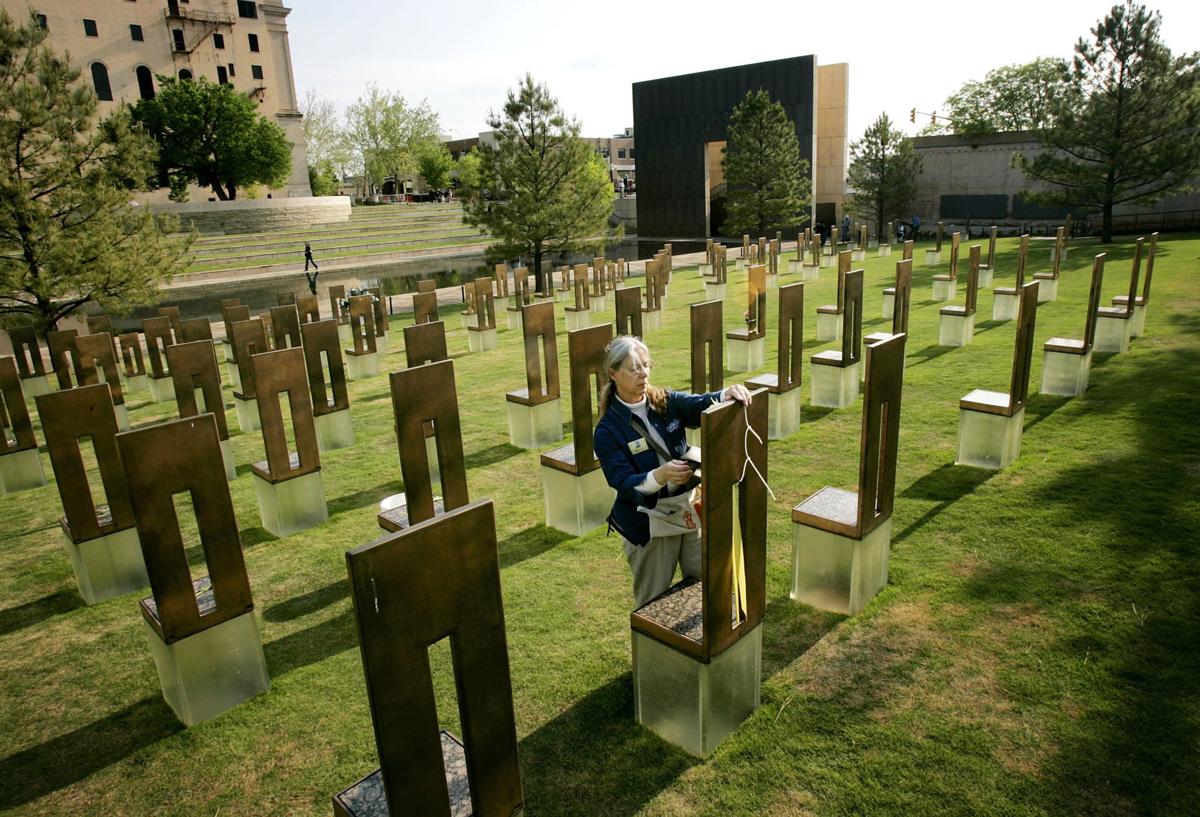 A volunteer at the Oklahoma City National Memorial tends to one of the chairs representing the 168 people killed in the 1995 bombing of the Alfred P. Murrah Federal Building in 1995. At the time, it was the worst domestic terror attack in U.S. history. (Photo by Win McNamee/Getty Images) 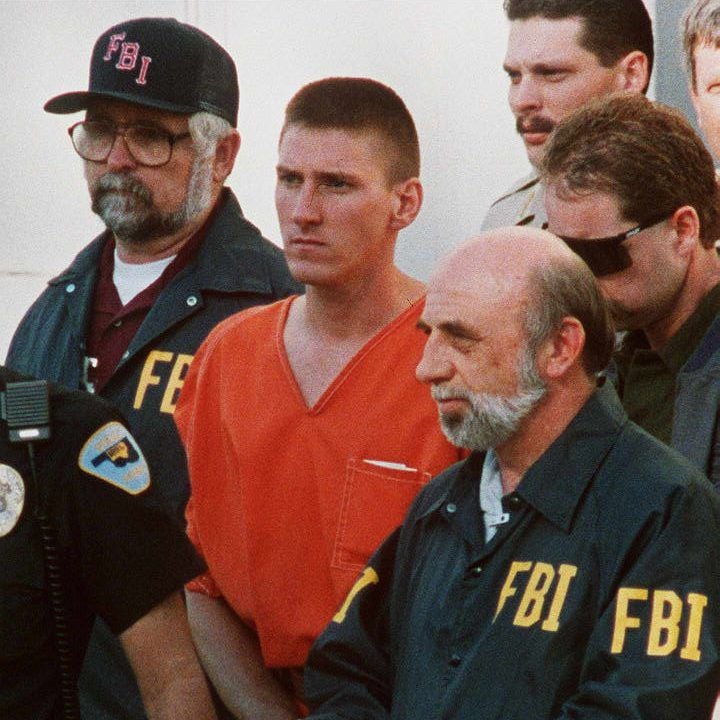 On April 22, 1995, Timothy McVeigh was led from court in Perry, Okla., by FBI agents after being charged with involvement in the April 19, 1995, bombing of the Alfred P. Murrah Federal Building in Oklahoma City. (BOB DAEMMERICH/AFP/Getty Images)

WASHINGTON — Some racists and anti-government activists who bill themselves as part of the "alt-right" have a new hero: the most notorious American-born terrorist of all time, Oklahoma City bomber Timothy McVeigh.

Extremists have been praising McVeigh, the one-time Pendleton security guard who killed 168 people in the bombing of an Oklahoma City federal office building, for months — long before racist groups gathered for a rally in Charlottesville, Va., that turned violent last weekend. McVeigh was executed for his crime.

This newfound McVeigh attention took an especially serious turn Monday. The U.S. Attorney's Office in Oklahoma City announced charges against an alleged copycat named Jerry Drake Varnell — who, the FBI said, had planned to blow up a bank using a vehicle bomb similar to the one McVeigh used.

To hear Varnell tell it, McVeigh did the right thing in April 1995 when he loaded a rented truck with explosives to blow up the Alfred P. Murrah Federal Building.

"What happened in Oklahoma City was not an attack on America, it was retaliation," Varnell said last week, in a Facebook message to a witness who was cooperating with the FBI, according to court papers. "Retaliation against the freedoms that have been taken away from the American people."

Varnell is by no means the only apparent extremist entranced by McVeigh.

According to a late June report from the Southern Poverty Law Center, at least three people who have been arrested this year — including one who murdered two men on a train in Portland, Ore. — all made clear that they admire the Oklahoma City bomber. A blogger on the neo-Nazi Daily Stormer website suggested building a memorial to a man many see as a monster.

This comes as a repulsive shock to Kari Watkins, executive director of the Oklahoma City National Memorial & Museum.

"It's disgusting to me," Watkins said.

She said she didn't want to speak for families who lost loved ones in the Oklahoma City bombing, "but I think they would be in disbelief and shock about this."

Federal authorities in Oklahoma City said they arrested Varnell after a citizen's tip led to a months-long investigation in which an undercover agent became close to Varnell and, in essence, caught him in a sting operation.

The FBI even provided materials that Varnell thought were explosives but that weren't. He was set to detonate what he thought was a 1,000-pound bomb, but what really was a 1,000-pound dud, in front of a BancFirst building in downtown Oklahoma City when agents arrested him early Saturday.

Varnell decided on bombing the bank after first considering an attack on the Federal Reserve in Washington, authorities said.

Asked about Varnell's motive, Raul Bujanda, assistant special agent in charge of the FBI office in Oklahoma City, said Varnell — like McVeigh — had an anti-government ideology.

"He wanted to go ahead and replicate the Oklahoma City bomb," Bujanda said, at a news conference.

Like McVeigh, Varnell — who was a year old at the time of the 1995 Oklahoma City bombing — hoped to spark a revolt against the federal government.

"I'm out for blood," Varnell told an FBI informant in a text message, according to court papers. "When militias start getting formed I'm going after government officials when I have a team."

In reality, Bujanda said, Varnell was something of a lone wolf — just like three other McVeigh admirers who were arrested in separate incidents earlier this year.

The Southern Poverty Law Center noted that when police in Tampa investigated a double murder involving self-described neo-Nazis in mid-May, they charged the murder suspect's roommate, Brandon Russell, with possession of the same kind of bomb-making materials McVeigh used.

Later that month, police in Washington, D.C., arrested a Pennsylvania man with an assault rifle, handgun and 90 rounds of ammunition at the Trump Hotel, on Pennsylvania Avenue between the White House and Capitol. The man, Bryan Moles, 43, told an informant he “wanted to be like Timothy McVeigh,” the Southern Poverty Law Center reported.

On May 26, police in Portland arrested Jeremy Christian, 35, charging him with slashing the throats of two men who were trying to aid two Muslim women that Christian had been harassing on a commuter train.

Christian's Facebook page showed he had conflicting political views. But on April 19 — the 22nd anniversary of the Oklahoma City bombing — Christian said on Facebook: “May all the Gods Bless Timothy McVeigh — a TRUE PATRIOT!!!”

Daily Stormer blogger Andrew "Weev" Auernheimer wrote in June that he wanted to raise money to build a monument to McVeigh. “Think of it, a gigantic bronze statue of Timothy McVeigh poised triumphantly atop a Ryder truck," Auernheimer wrote.

“I am not joking,” Auernheimer added. “This should be done. Imagine how angry it would make people.”

Such sentiments are not entirely new.

Last year, reported the Southern Poverty Law Center, as militiaman Ammon Bundy and his followers illegally occupied an Oregon wildlife refuge, one of Bundy's supporters, Norm Olson, said he had a message for members of Congress. Olson's message: “Timothy McVeigh DIED FOR YOUR SINS!!!!!!!!!”

Despite these sentiments, it's unclear exactly how widespread admiration for McVeigh is among the alt-right, said Tom Pyszczynski, a psychology professor at the University of Colorado who has studied political extremism. "It's not that many people, but it's hard to tell how many because they usually don't go public except in the fringe groups they belong to," he said.

It's clear many racists and anti-government activists feel emboldened in the wake of Donald Trump's election as president, given that Trump expressed anti-immigrant, anti-establishment views all through his campaign, Pyszczynski said.

Watkins, at the Oklahoma City Memorial & Museum, said it's clear that far more Americans admire the police and firefighters who responded to the bombing. But Watkins didn't like what she saw in Charlottesville last weekend.

Noting that both far-right and far-left extremists are dangerous, Watkins said: "When I saw those faces in the crowd, it concerned me. I can see some of those people supporting McVeigh."

A volunteer at the Oklahoma City National Memorial tends to one of the chairs representing the 168 people killed in the 1995 bombing of the Alfred P. Murrah Federal Building in 1995. At the time, it was the worst domestic terror attack in U.S. history. (Photo by Win McNamee/Getty Images)

On April 22, 1995, Timothy McVeigh was led from court in Perry, Okla., by FBI agents after being charged with involvement in the April 19, 1995, bombing of the Alfred P. Murrah Federal Building in Oklahoma City. (BOB DAEMMERICH/AFP/Getty Images)