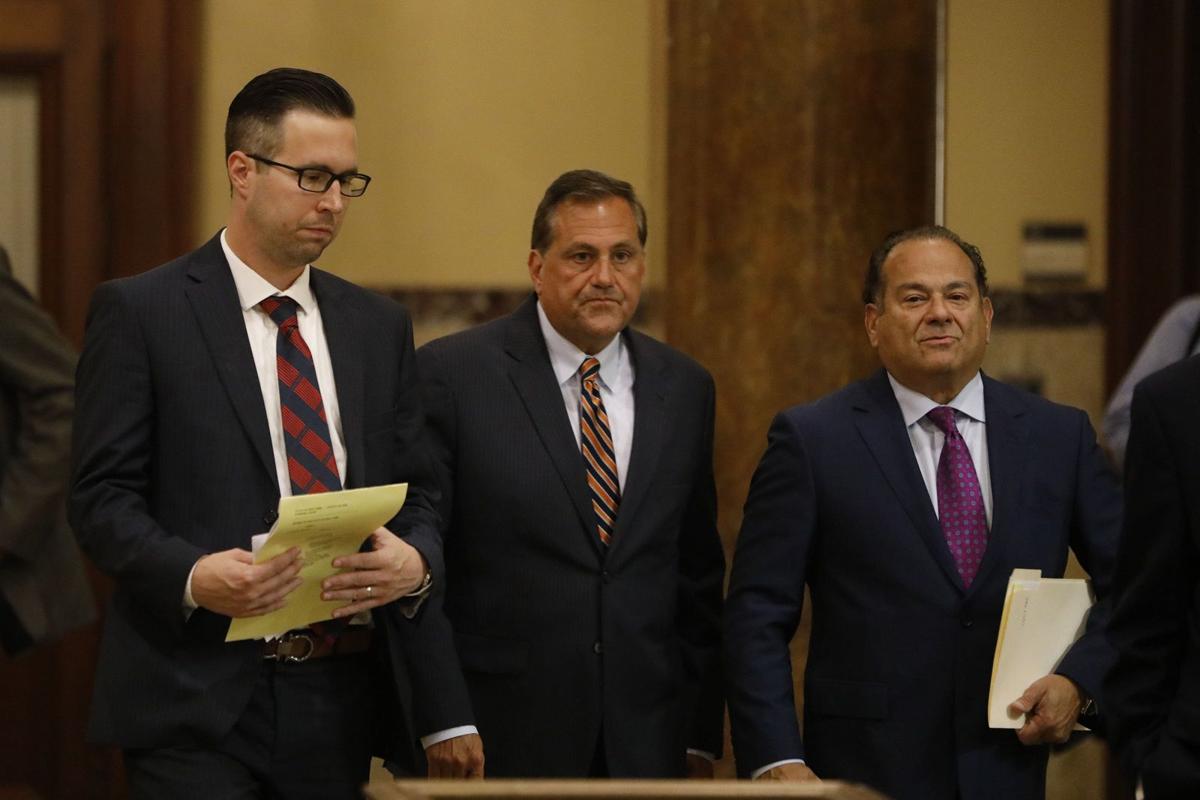 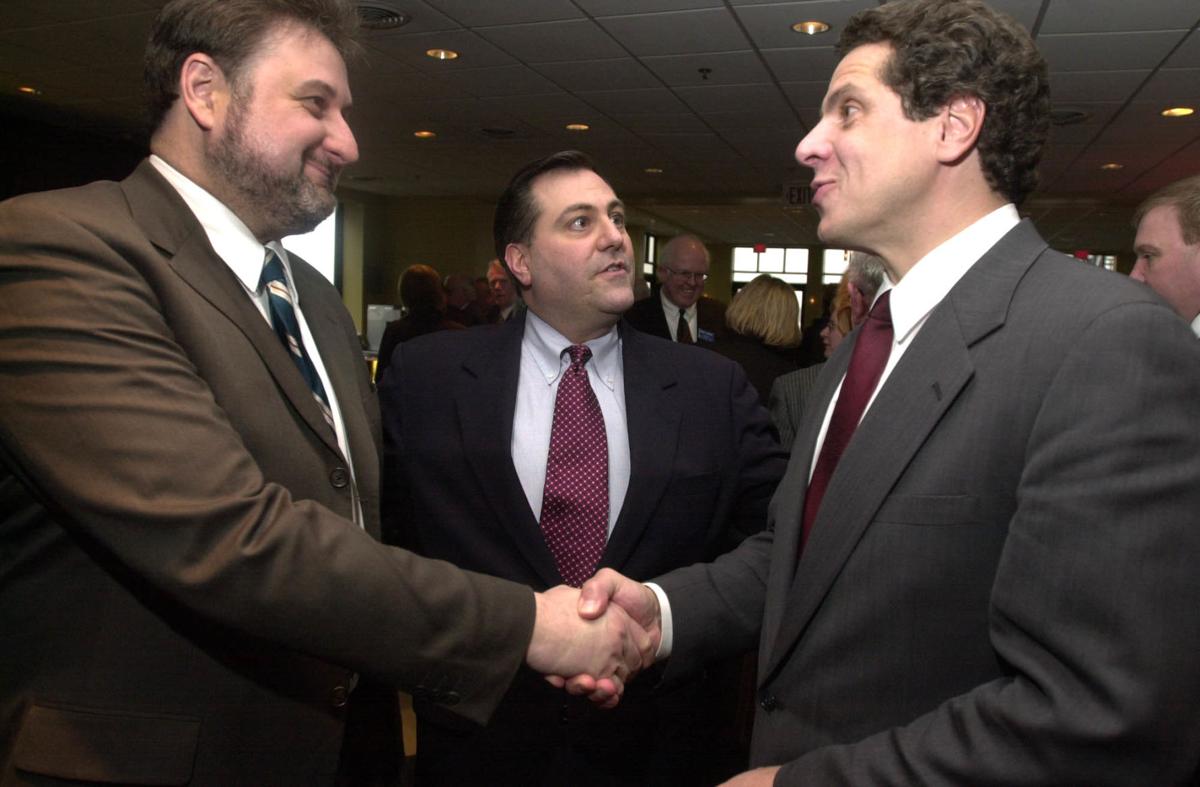 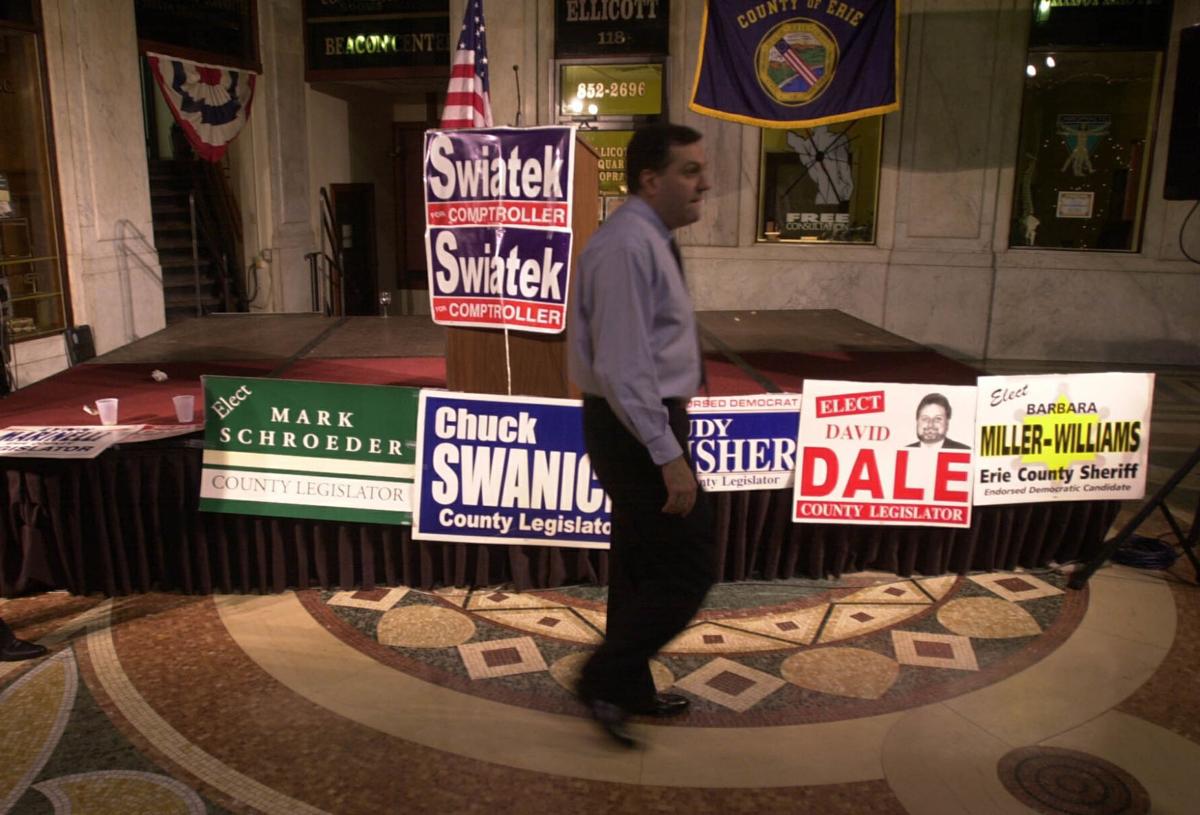 For more than three decades, G. Steven Pigeon hobnobbed with mayors, governors, senators — even a president — as one of New York’s most influential power brokers.

But, on Friday, Pigeon stood virtually alone in State Supreme Court while pleading guilty to a felony bribery charge.

Only three defense attorneys appeared with the former Erie County Democratic chairman, as he admitted to bribing a State Supreme Court justice.

No family, no friends and — certainly — no powerful politicians.

Though he had previously vowed to beat the nine-count indictment lodged more than a year ago that he blamed on a “political witch hunt,” it all came crashing down Friday.

After practically daring prosecutors over the years to challenge his controversial political fundraising, he acknowledged one count of bribery related to former state Supreme Court Justice John A. Michalek, who pleaded guilty to related charges 15 months ago.

“Yes, your honor,” Pigeon told state Supreme Court Justice Donald F. Cerio Jr., when asked if he accepted the plea agreement he signed with the state Attorney General’s Office that could result in a year behind bars.

Clad in a conservative dark suit and saying nothing to reporters, he will return for sentencing Dec. 21.

It was all unfamiliar territory for the brash kid from West Seneca who started out volunteering for the late Assemblyman Vincent J. Graber, or the political junkie signing on to Sen. Gary Hart’s presidential campaign in 1984. He had put up a good fight against the charges, hiring top defense attorney Paul J. Cambria Jr. to launch a groundbreaking effort for suppression of key email evidence seized in an early morning raid on his waterfront condo in May 2015.

But Cambria acknowledged outside court Friday that after Cerio first ruled for him, and then against him, the prospect of seeing in evidence the emails siphoned from Pigeon’s seized laptop and cellphone contributed to the plea appearance.

He noted election law charges — dropped Friday, as part of the plea bargain — and related federal charges he still faces.

“The combination of three separate prosecutions and the machinations involved with going through that — and the mental and physical commitment, and the financial commitment — had a lot to do with what we ultimately have done,” Cambria said, adding he will argue that no jail time will prove “absolutely appropriate” for his client.

Prosecutors always contended that the emails would prove the relationship leading to the charges against Pigeon, 58, and Michalek. And it was also expected that Michalek would testify for the state against Pigeon as part of his own plea agreement.

But the possibility of prison still looms for the onetime confidant of Bill and Hillary Clinton, Gov. Andrew M. Cuomo and Buffalo mayors Anthony M. Masiello and Byron W. Brown.

“The people also consent to this plea because the court has agreed to consider incarceration as a form of punishment of the defendant,” Assistant Attorney General Susan H. Sadinsky said in court. “We also consent because this court is not committing to a no-jail sentence.”

Though the office of Attorney General Barbara D. Underwood was earning kudos in many quarters for the conviction, others are not so excited. Former Assistant District Attorney Mark A. Sacha and two former Erie County legislators instigated the case four years ago with a complaint to the Erie County Board of Elections over Pigeon fundraising tactics with a political committee called the WNY Progressive Caucus.

That complaint ultimately led to a referral to the attorney general, an investigation and charges.

But Sacha said that after more than two decades of complaints about Pigeon’s attempt to skirt election and other laws, the potential for a few months in jail for bribing a state judge ranks as an “outrage and embarrassment.”

“My first reaction was ‘wow,’ ” he said, “but when I heard the details my reaction was that it was run right from the Governor’s Mansion in Albany. [Assistant Attorney General] Diane LaVallee did a fine job, but Steve Pigeon is very close to the governor who appointed the attorney general.

“I’m happy some responsibility was taken,” he added, “but the reality is a lot less.”

Sacha also noted Cambria’s indication that the agreement includes no further “cooperation” from Pigeon regarding ongoing investigations. The Attorney General’s Office would not comment, but shot back at Sacha. It pointed to Attorney General Barbara D. Underwood’s long legal resume that includes stints as state and federal solicitor general, and bristled at any suggestion of Capitol intrigue benefiting Pigeon.

“As The Buffalo News noted, Pigeon’s activities ‘spawned controversy for more than two decades,’ ” said attorney general spokeswoman Amy Spitalnick. “This office actually took on his corruption — and, under Attorney General Barbara Underwood, Pigeon was forced to plead guilty to felony bribery and lose his law license, as he finally faces the consequences for his actions.”

Legal sources said sentences for official bribery are often far more lenient than what Pigeon is now expected to receive. They noted he forfeits his license to practice law as part of the agreement.

“The attorney general is an independent office and this factless, shameful, and frankly, sexist conspiracy theory isn’t worth the air to respond to. To be clear, all we know about this case is what we saw in the media,” said Richard Azzopardi, a Cuomo spokesman, on Friday.

“That’s absolute craziness,” added Cambria. “Sacha needs to just get over it.”

In 2017, The News received a partial response to a Freedom of Information Law request it submitted to the state’s economic development office, seeking correspondence from the agency involving Pigeon. Records showed Pigeon was a regular recipient of emails from Sam Hoyt, a former state lawmaker, who at the time was Cuomo’s economic development point person in Western New York.

Hoyt, who had once been political enemies with Pigeon, in 2013 would tip off Pigeon to state government job openings. The tips weren’t for Pigeon, a Cuomo insider at the time, to try to get a job for himself, but rather for apparently currying political favors.

“Here is a good one. Let’s find names from a few town (Democratic) chairs we need to cultivate," Hoyt wrote, in one email to Pigeon.

The emails were released after The News considered legal action to force the release of the documents, withheld for more than a year.

“He never got any jobs,” he said. “He sent resumes around and talked to people.”

Now, the Pigeon issue is entering the race for governor.

Marc Molinaro, the Republican candidate for governor, said: “Andrew Cuomo has emboldened the culture of cronyism, corruption and incompetence. Today, another close ally within his orbit pled guilty — law enforcement is closing in and it is only a matter of time for Andrew.”

“Steve Pigeon served as Andrew Cuomo’s point man in Buffalo for years,” she said. “His guilty plea is a reminder of what New Yorkers already know — their government is for sale.”

Miner, who once served as Cuomo’s co-chairwoman of the state Democratic Party, said the case involving Pigeon, the newest member of a long line of convicted felons embroiled in a corruption case, shows the need for an independent state ethics commission, stronger campaign finance laws and ending a pay-to-play environment that has long ruled in Albany.

But the Pigeon plea seemed to hit home with those who have known him best over many years.

But, he noted that the more power Pigeon accumulated, the more he became obsessed with gaining even more.

“He was a youthful and enthusiastic volunteer full of zeal for political combat, and as a [county] legislator he felt deeply about what he believed in,” Lenihan said. “But he got carried away. It became an obsession. It’s a sad day.”

Target and Starbucks will not require masks for fully vaccinated customers

Target and Starbucks will not require masks for fully vaccinated customers