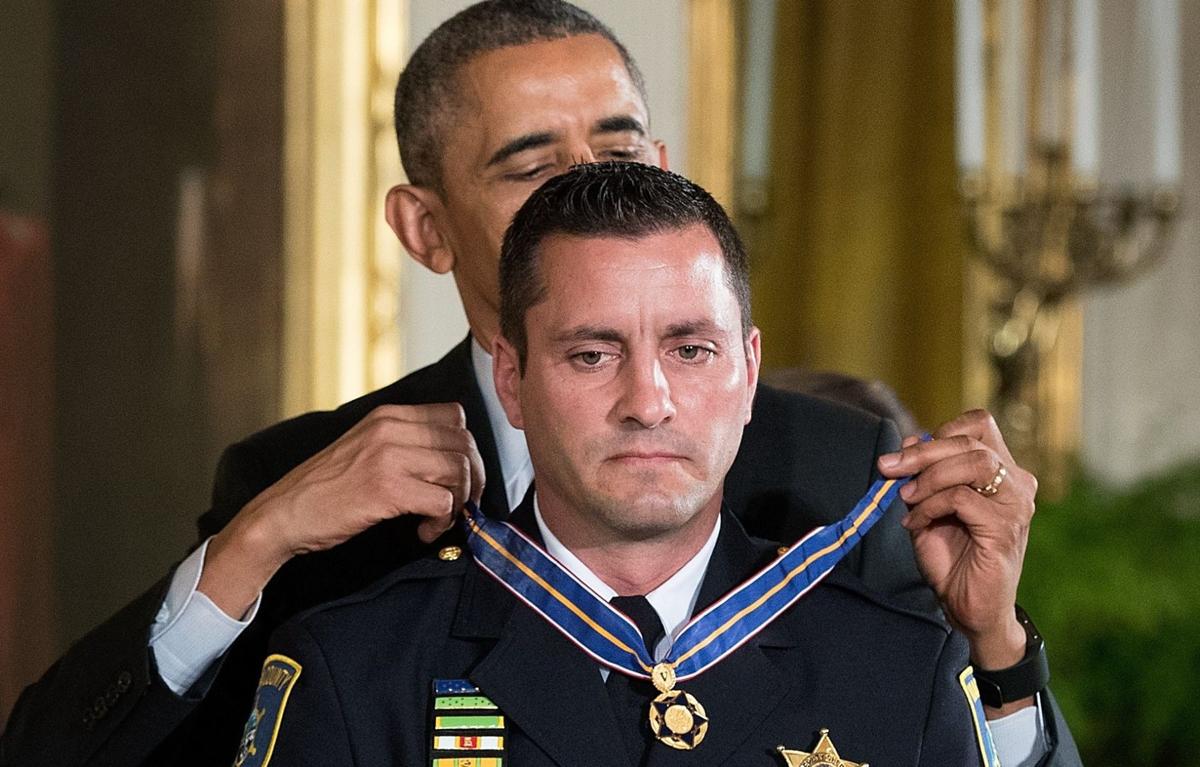 President Barack Obama presents Niagra County Sheriff’s Deputy Joseph Tortorella with the Medal of Valor during a ceremony in the East Room of the White House on May 16, 2016, in Washington, D.C. (Getty Images) 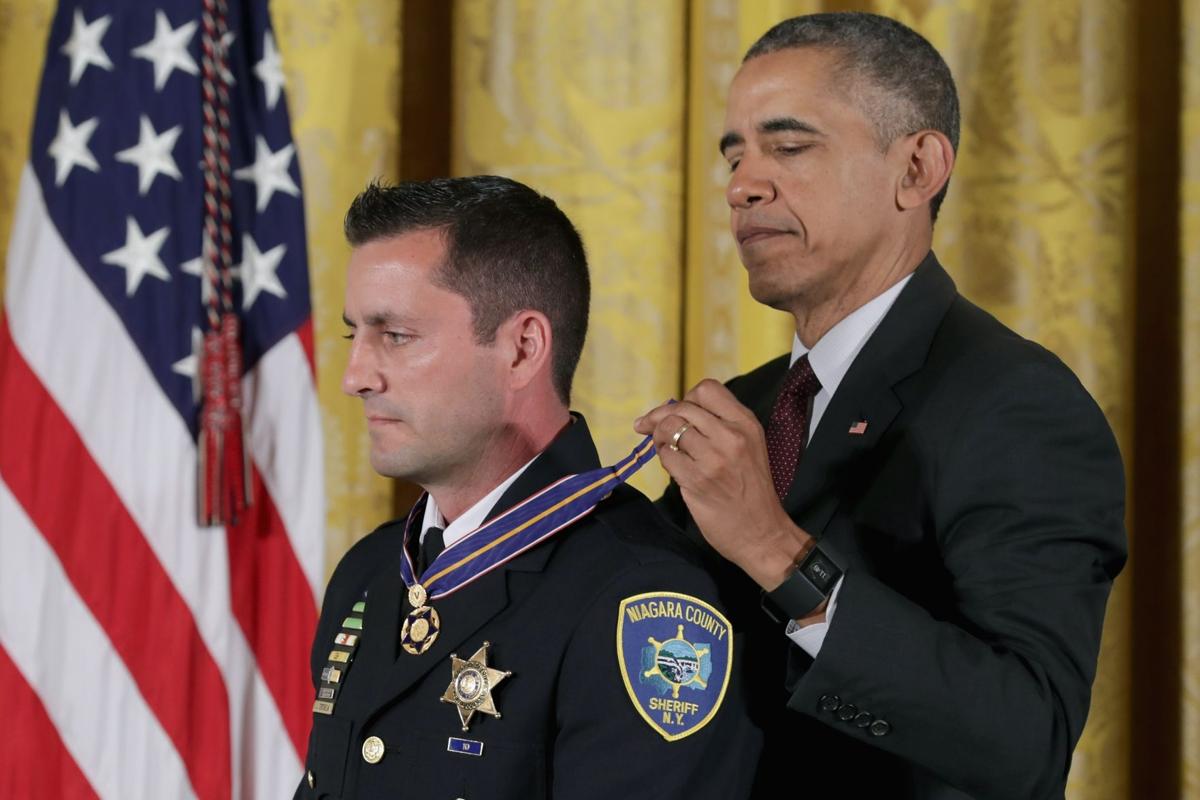 And the bullet stayed right there, lodged in the officer’s bulletproof vest, while Tortorella did his job. He shot back at the gunman who had just shot his parents and who started a shooting spree in the shadow of the elementary school where the deputy’s wife teaches and where two of his kids were in class. Then Tortorella called for a lockdown in Wheatfield’s Errick Road Elementary School and ran to the back of the house where the incident unfolded, putting himself between the shooter and the school.

For all of this, Tortorella found himself standing in front of President Obama in the White House on Monday as the commander in chief hung a ribbon with a medal attached around the deputy’s neck. The Public Safety Officer Medal of Valor, the nation’s top award for law enforcement officers, then rested on Tortorella’s chest, just a few inches away from the spot where the bullet hit him.

Obama honored Tortorella and 12 other officers for “rising up beyond the call of duty, saving the lives of people they didn’t know.”

But to hear Tortorella tell it, he just did what good law enforcement officers do every day.

“There are so many close calls you don’t even hear about,” said Tortorella, who used his time in front of the cameras and microphones outside the White House to laud his fellow officers who responded to that incident that day – and who went into the house where the shooting started, not knowing if they might find themselves at the wrong end of a gun.

“Maybe they can get a team award. They deserve it as well,” he said.

If that’s the case, maybe Tortorella’s family deserves an award, too, given that they, too, lived through the drama that Tortorella can’t get out of his mind, the drama that brought them all to the White House on Monday.

Tortorella, his wife, Erica, and his children spelled out every step of that drama after the White House event.

It started, as so much police work does, with an interruption to the routine that itself seemed routine.

The rainy morning of April 17, 2015, found Tortorella sitting in his squad car at lunchtime, eating a Stinger Taco from Submasters, when a dispatcher alerted him to a 911 hang-up call at a home near Errick Road Elementary School. Cops get these calls all the time, and often it’s the result of a kid playing with a cellphone and nothing more.

When Tortorella arrived there, a young man answered the door and quickly shut it in the deputy’s face, saying he would be right back.

Waiting there at the doorstep, Tortorella heard a woman’s scream from inside. A woman in agony, crying.

Tortorella knew, then, this was no routine 911 hang-up call. This sounded like trouble, so he called his dispatcher and asked for backup.

Moving away from the front door and toward his squad car, Tortorella then saw the young man emerge from the back of the house and approach up the driveway, his hands covered with blood.

Tortorella drew his handgun and ordered the young man to his knees. The young man complied, but wouldn’t answer the deputy’s questions about what was happening in the house nearby, and wouldn’t say whether he had any weapons on him.

So the deputy warned the young man.

“If you reach for a gun or weapon, I’m going to shoot you,” he said.

“If you do, shoot me in the (expletive) head,” the young man replied.

Seconds later, the young man pulled out a black handgun from his pants. So Tortorella started shooting, hitting the young man in the stomach, the back and the leg.

Somehow that wasn’t enough to stop the gunman, who ran behind the patrol car and opened fire. Tortorella felt a thud on his left rib cage as a bullet blew the Taser holster off his chest.

Ducking for cover behind a tree, Tortorella just kept on shooting.

But he had to stop, temporarily, because he needed to reload. Meantime, he thought about that school nearby, about his wife, his kids. He called the dispatcher and ordered the school on lockdown as bullets flew all around him, as bullets peeled the bark off the tree that sheltered him.

Finally, the shooting stopped, and Tortorella saw the young man moving toward the back of the house. So the deputy did the same, positioning himself behind a car in the school parking lot, just in case the shooter had a school shooting in mind.

He didn’t. Officers who entered the house later found the young man, Duane A. Bores Jr., dead of a self-inflicted gunshot wound. Nearby, his parents, Duane and Cynthia Bores, lay bleeding from bullet wounds.

Erica Tortorella heard the quivering voice of the school principal over the intercom while she was at lunch, telling everyone the school was on lockdown. Instinctively she ran for the student cafeteria, where about 100 second-graders were eating lunch near plate glass windows that, she thought, might serve as a target for a shooter.

She and other teachers herded the students into the kitchen for safety. Then Erica Tortorella texted her husband to see if he was OK, to see if he knew what was going on.

“I probably messaged him 17 times,” she said. “All the while I was trying to keep my cool.”

Meanwhile, in a classroom not far away, 9-year-old Sam Tortorella heard the sound of shots and figured they were just hockey pucks hitting the boards in the school rink nearby. But then he heard the intercom announcement, and thought about his dad, and started praying.

Impatient for news, Erica tried calling her husband, but the call went straight to voicemail. She got “a terrible, terrible feeling,” which only got worse when her phone rang and she saw that Niagara County Sheriff James R. Voutour was calling.

Voutour said her husband had been involved in a shooting, but that he was all right – and that the sheriff needed her to come to the school entrance to talk with officers who wanted to release the school from its lockdown.

Trained in these crisis situations, she knew what to say next to the sheriff.

“How do I know that someone doesn’t have a gun to your head?” she asked. “I will go to the front of the building, but I want you to tell me who I’m going to see or I’m not going to open the door.”

Going there, she saw two deputies and a state trooper, just as promised. She opened the door, and the lockdown ended.

And a little while later, in the parking lot, she saw her husband.

All of this left Joe Tortorella a bit haunted by the nightmare that made him a hero.

He’s won several local and state awards, including the New York State Deputy Sheriff of the Year award. Duane and Cynthia Bores – who could have bled to death but for Tortorella’s quick, by-the-book response to the shootings – recovered from their wounds, meaning he likely saved their lives as well as his own.

Meantime, though, Tortorella can’t stop thinking about what happened. He went back to work a month after the incident, and worked a desk job for four days before getting antsy and asking to get back to his patrol car. But ever since, he said, he’s been plagued by anxiety.

“Not a day goes by that I don’t think about it,” he said. “I keep replaying it in my head. It’s difficult at times.”

He said he keeps looking for the good that can come out of the bad of that day, and he finds it, in part, in the training video that was made on the incident.

“If my story can help some young recruit survive, well, then that’s what it’s all about,” he said.

Tortorella said he feels a bit embarrassed by all the attention – which only multiplied with the announcement of his Medal of Valor last week.

“The sheriff called me to tell me about it, and I just couldn’t believe it,” Tortorella said. “I almost wanted to cry.”

A week later, Sam Tortorella, now 10, and his sisters Liliana, 7, and Gianna, 5, found themselves in a reception at the White House, where they met the president and got goody bags stuffed with White House frisbees, Barack Obama yo-yos, chocolates and pictures of Bo, the first dog of the United States of America.

Obama greeted Erica and her two daughters, in their matching blue dresses with blue flowers in their hair, and her son with the words: “Oh, what a wonderful family!”

And that’s not all.

And at the ceremony that followed the reception, Obama gave Liliana’s father the honor of a lifetime, an honor, that for the moment at least, could ease any anxiety.

The president of the United States draped the Medal of Honor around Deputy Tortorella’s neck and told him: “I’m proud of you, man.”

Erie County Health Commissioner Dr. Gale Burstein warned those without a vaccine should consider skipping holiday gatherings over the next few weeks.

President Barack Obama presents Niagra County Sheriff’s Deputy Joseph Tortorella with the Medal of Valor during a ceremony in the East Room of the White House on May 16, 2016, in Washington, D.C. (Getty Images)