Subscribe for $1
Read Today's E-Edition
Share This
Political violence blamed in arson at anti-abortion group's center in Amherst
0 Comments
Share this
Support this work for $1 a month
Stephen T. Watson

A center in Eggertsville operated by an anti-abortion group was "firebombed" early Tuesday in an apparent act of political violence, officials with the organization said.

"Jane was here," was written on the side of the building at 1230 Eggert Road, off Main Street, where several windows were shattered and offices were extensively damaged by flames and smoke.

Jane's Revenge claimed to be behind a fire set last month at an anti-abortion office in Madison, Wis., but the group has not formally claimed credit for this latest apparent arson.

"This is the face of abortion," CompassCare CEO Jim Harden said at an early afternoon news conference, gesturing at the vandalism behind him. "They're revealing it to us right now. We're all about life. We want to save every single human life we possibly can. And they're looking to destroy our ability to do that. But they did not succeed."

Harden said the culprit or culprits smashed windows and set fires in two different locations in the building.

Eggertsville Hose Company was assisted by several other volunteer companies in tackling the blaze that was reported at 2:30 a.m. Amherst police, town fire investigators and an Erie County Sheriff's Office K-9 unit also responded to the fire that authorities say caused $150,000 damage to the structure and its contents.

Amherst Supervisor Brian J. Kulpa said it is his understanding that an incendiary device of some kind was used to light the fire, which town police are investigating as an arson.

Kulpa said there was no justification for setting the fire and he wants to see whomever committed this crime prosecuted.

Even though it appears no one was inside the building at the time, the fire forced emergency responders to risk their own safety, Kulpa said. He noted two volunteer firefighters were treated for minor injuries, though they have since been released from the hospital.

"No matter who you are or what your political opinion is, you know, there's no given right to express your opinion through violent actions," Kulpa said.

CompassCare is an anti-abortion organization that provides free basic medical care and counseling to pregnant women to encourage them to seek other options beside abortion.

"So if we can give her a vision, or a future after having a child, saying, 'I can do this, I see now it's possible,' she's truly empowered," Harden said Tuesday.

Harden said CompassCare serves about 20 women per week at its Eggertsville clinic.

CompassCare in a blog post said organizations that oppose abortion have been targets of violence, online and off, for months.

The organization pointed to the vow from Jane's Revenge to undertake a "Night of Rage" in response to the decision from the Supreme Court – expected later this month – that will overturn the Roe v. Wade decision that legalized abortion in this country.

The federal government is preparing for a potential rise in political violence, according to a memo from the U.S. Department of Homeland Security obtained by the Axios news site.

Threats targeting justices and other public officials, along with health care providers, "are likely to persist and may increase leading up to and following the issuing of the court’s official ruling," the memo stated.

CompassCare said it had retained security consultants and was in the process of installing armored glass at the Eggertsville office.

The organization complained that New York Gov. Kathy Hochul, in contrast, earmarked $35 million to boost clinics that provide abortions, including $10 million to ramp up security at the clinics.

He wondered whether Hochul or New York Attorney General Letitia James would speak out to condemn the attack.

"Well, you know what? It's shameful what these abortion activists have done. But it's even more shameful that you don't hear a denunciation of this violence of pro-life pregnancy centers from the sources of power," Harden said.

James' office did not respond to a request for comment, but Hochul's office did release a statement to The Buffalo News.

"Governor Hochul condemns violence of any kind, and the State Police stand ready to assist local authorities with the investigation," a spokesman said in an email.

Noting today's fire and related incidents, Harden in a statement compared them to "the pro-abortion 'Kristallnacht.' "

That's a reference to "the Night of Broken Glass," a series of organized riots carried out over two days in 1938 by Nazi paramilitary forces and German civilians that led to widespread vandalism and destruction of thousands of Jewish businesses, synagogues and homes, along with the mass arrests of 30,000 Jewish men and the murders of 100 people, records show.

Asked about the appropriateness of the comparison, Harden stood by his comments. But local Jewish organizations rejected this linkage.

"It is inappropriate, insensitive, and unnecessary to make the comparison of the CompassCare fire to the events of Kristallnacht. As we’ve stated before, modern issues do not need to be compared to events of the Holocaust to be considered negative or important," the Buffalo Jewish Federation and Holocaust Resource Center said in a joint statement.

Harden said CompassCare will find temporary office space to begin providing services as soon as Wednesday at the new, undisclosed site. It will take months before the Eggert Road center is ready to reopen, he said.

Harden said he's received calls offering support from around the country in the hours since the apparent arson occurred. The building did have security cameras in place and authorities are reviewing the data recorded by the system, he said.

Speaking of the arsonists, Harden said, "We pray that justice is done upon them."

The operators of an Eggertsville clinic targeted in a suspected firebombing and those who support the center's anti-abortion mission say the investigation into the incident isn't a priority for government agencies at the state and federal levels.

CEO Jim Harden said the organization likely has spent more than $400,000 on repairs to the damaged structure, equipment and furnishing as well as enhanced security for the building.

The Editorial Board: Politics, false accusations raise the temperature as anti-abortion clinic reopens

The divisions were apparent in who attended the event, who stayed away and especially in the careless talk that further polluted an overwrought environment.

"We have a right to our own evidence," CompassCare President and CEO James Harden told The Buffalo News. "We gave it to them in good faith, and we’re expecting to see it.

A team of investigators from the FBI's training and research center has canceled a visit to Buffalo intended to provide specialized assistance to the probe into a suspected firebombing at an anti-abortion center in Eggertsville, according to CompassCare's chief executive.

The FBI's Buffalo Office on Monday announced a reward of up to $25,000 for anyone who can help identify the two people responsible for the firebombing of an anti-abortion center in Eggertsville.

Is it true that earthquakes help trees grow? 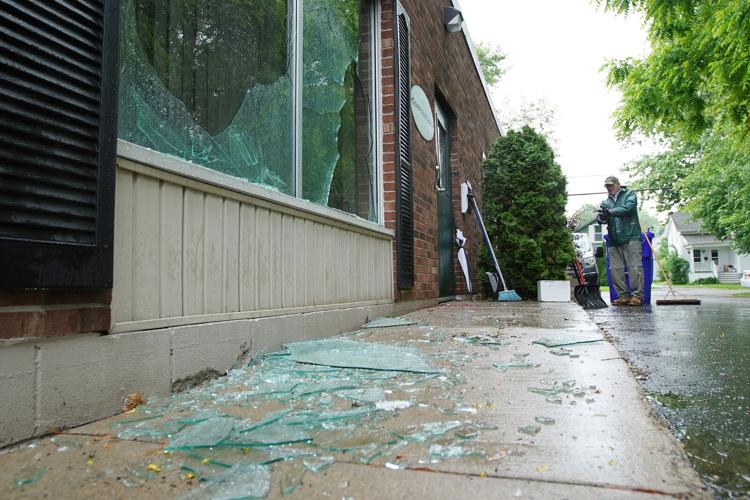 Paul King cleans up broken glass  at the CompassCare facility in Amherst on Tuesday, June 7, 2022. 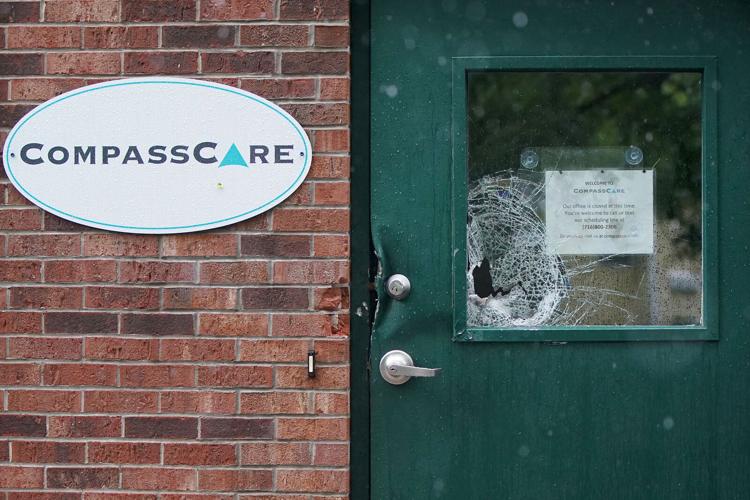 A broken window and a damaged door at CompassCare, an anti-abortion crisis pregnancy center in Amherst on Tuesday, June 7, 2022. 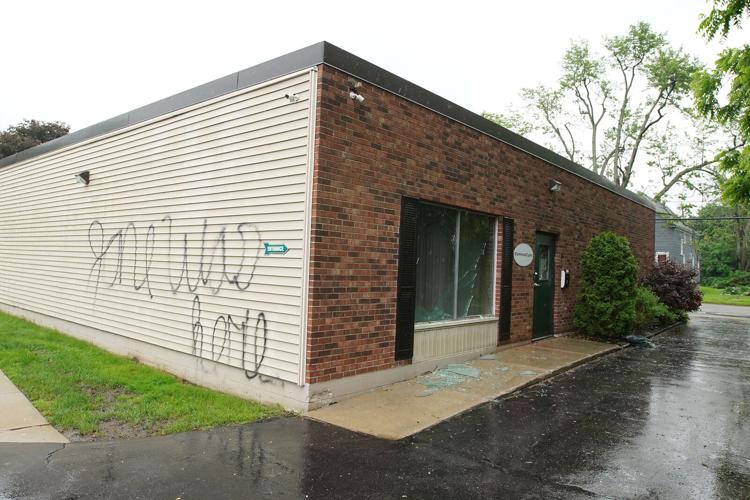 A wall is marked with graffiti and broken glass covers the sidewalk after a suspected firebombing at CompassCare, a crisis pregnancy center in Eggertsville on Tuesday, June 7, 2022. Center officials and their anti-abortion allies have decried the lack of information from investigators looking into the arson. 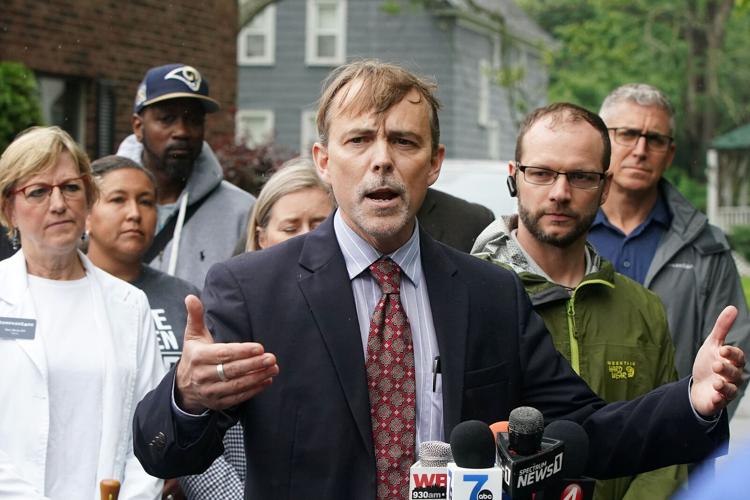 CompassCare President & CEO James Harden speaks to the media after an early morning firebombing at their facility in Amherst on Tuesday, June 7, 2022. 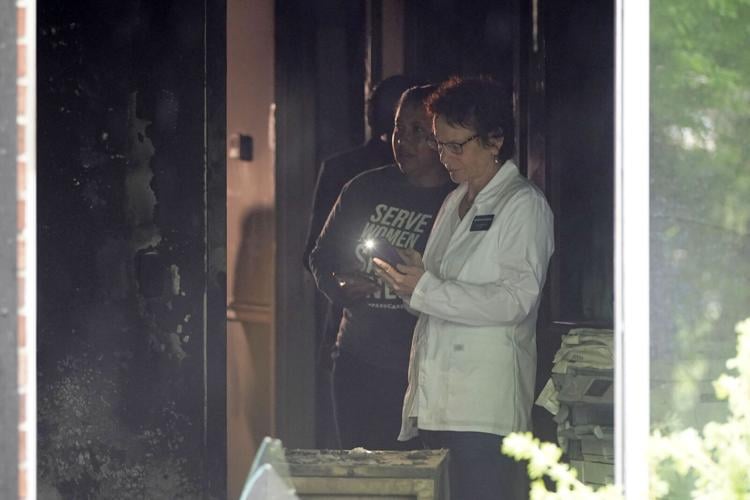 CompassCare employees look at the damage of an early morning firebombing at their facility in Amherst on Tuesday, June 7, 2022.