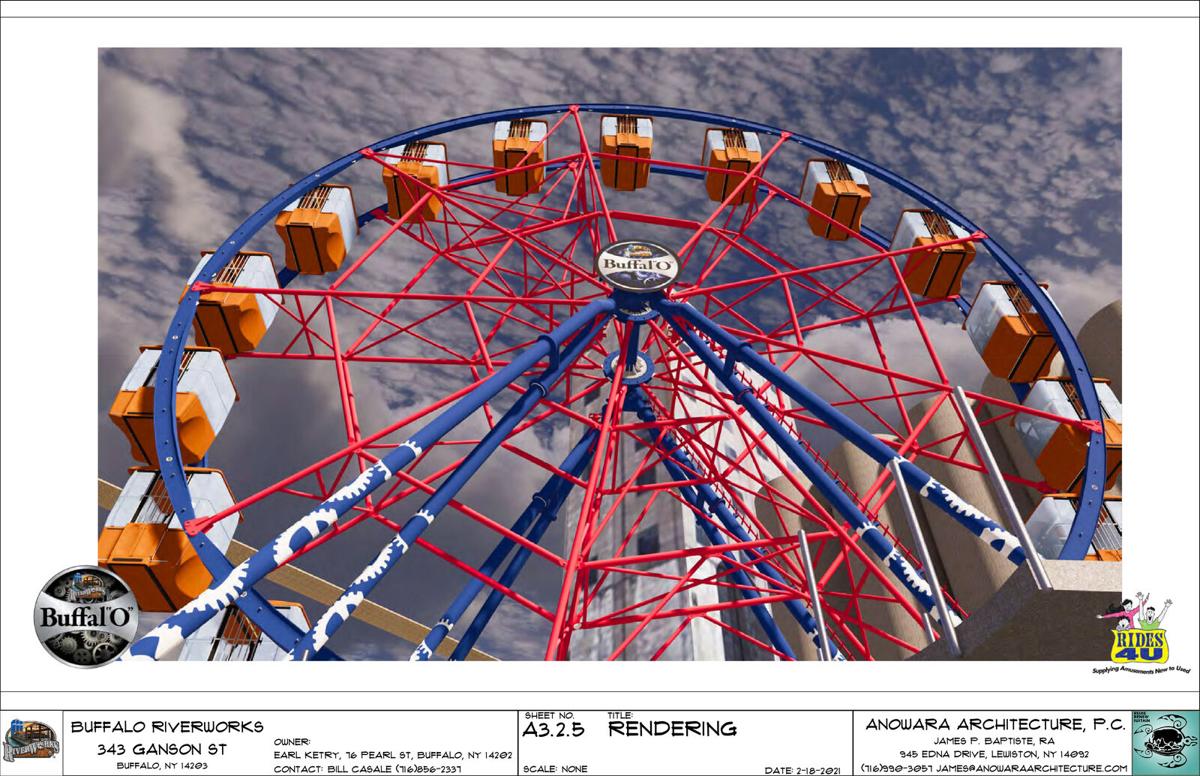 A rendering of the Ferris wheel coming to Buffalo RiverWorks. 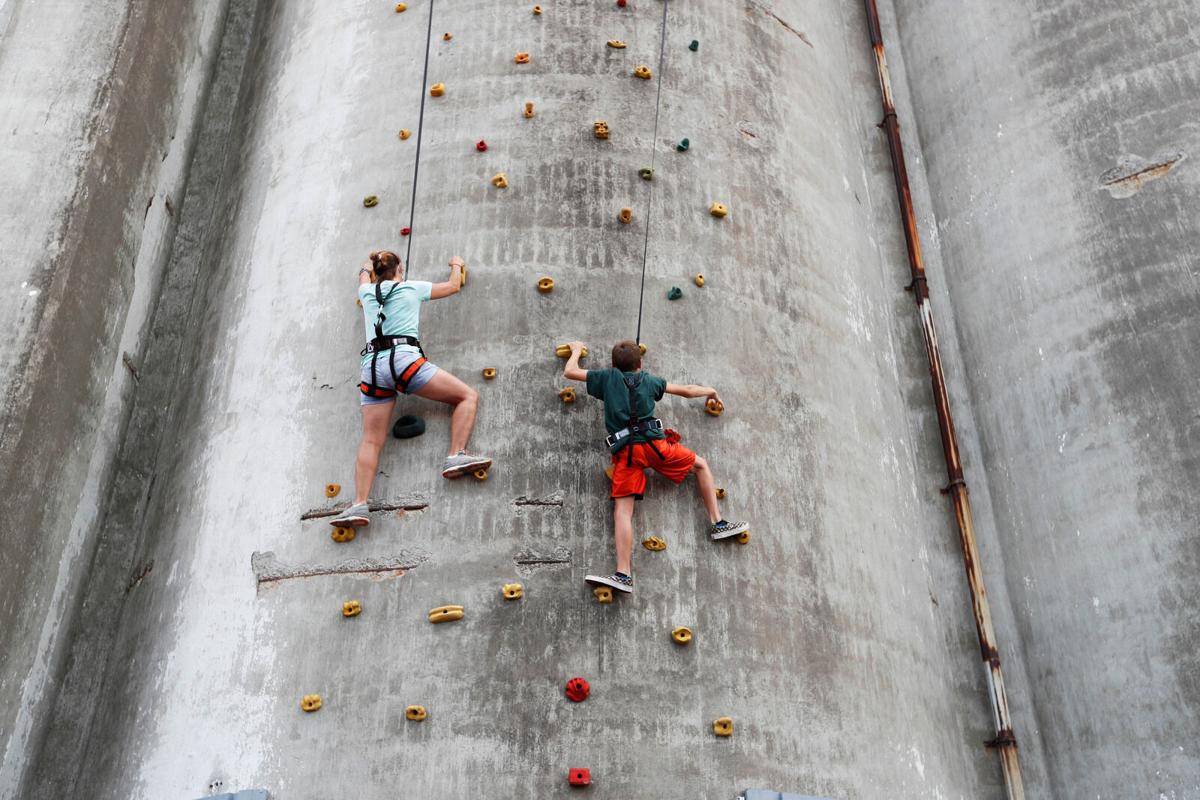 Lynn Neeson, left, and her son John, 11, climb the rock wall at RiverWorks.

A new Italian-built Ferris wheel expected to open in May at Buffalo RiverWorks promises "a wow factor" that will draw visitors to the entertainment and sports complex.

The 90-foot-tall red, white and blue attraction will be built on top of a 15-foot elevated platform near the Labatt Blue-painted silos on a 1.8-acre site that includes the ruins of a silo.

"We are hoping this will be a big draw this summer," said William Casale, general manager of RiverWorks. "We think it has such a wow factor and can become a landmark maybe similar to the Navy Pier and Coney Island."

The view from the Ferris wheel will be eye-popping, he said.

"We strategically placed the sightlines so you can see the cityscapes and the front horizon, and then the Lake Erie sunsets from the back horizon," he said.

"Now, more than ever, it's important that we hit the ball out of the park this summer because of the lack of business over the last 12 months," he said.

RiverWorks, one of the Pearl Street family of properties, will add an ax-throwing option in

The company, headed by general partner Earl Ketry, unsuccessfully tried to buy several rides from Fantasy Island before the Grand Island amusement park went bankrupt and announced it was closing in 2020.

The stock Ferris wheel from the Italian manufacturer will have custom features and copper cars enclosed with glass, Casale said.

He declined to say how much the amusement ride cost or how expensive it will be to install.

The Ferris wheel was going to be installed on the wharf, until engineers pointed out technical complications. The installation is still a complex endeavor, Casale said, with over 1 million pounds of concrete required to be poured on the site before the Ferris wheel can be installed.

A coastal assessment form, required by the city due to the planned Ferris wheel's proximity to the Buffalo River, will be filed Monday with the city's Planning Board. The Zoning Board is scheduled to consider the project on March 17.

Casale said he hopes to get a permit soon afterward because  the timetable for a May opening is tight. Foundation work will last approximately six weeks, Casale said. It will take about three weeks to install the Ferris wheel.

"The second we have the permit in hand, we have a contractor ready to begin putting in the foundation and an installer ready to go," he said.

The amusement ride is currently in shipping containers that are expected to leave Italy and begin crossing the ocean early in the week.

Rides will cost between $5 and $15, "depending on the circumstance or event that we are doing," Casale said.

Another amusement ride – a carousel – is also expected to open in May at Canalside.

Buffalo RiverWorks' other summer offerings, if allowed by Covid-19 guidelines, include a zip line, rope course, rock climbing wall, escape room and axe-throwing facility. There will also be live music, a beer garden and a hot dog cart.

The evangelical religious organization is planning an assortment of both exterior and interior improvements to its existing stone-and-frame building on Kensington Avenue.

The $6 million entertainment complex planned for the remediated Buffalo Color site at Riverbend will include walking paths, public access docks and other natural improvements along the

RiverWorks expands with purchase of two nearby grain silo complexes

Fresh off another successful summer on the city’s waterfront, the owners of Buffalo RiverWorks are expanding their property on both sides of the popular entertainment venue, buying up a pair of grain elevators on Ganson Street to add to their holdings. The partners, led by Earl Ketry and Doug Swift, paid $2.15 million in two separate transactions this week

At RiverWorks, you can watch or play the games

When the sprawling and spectacular RiverWorks first opened its doors on the Kelly Island banks of the Buffalo River more than two years ago, the question most asked about the entertainment complex was how to get there. Thousands of visitors and hundreds of eclectic sports events within its 5,000-capacity expanse later, the main inquiry is no longer how to

The tricky task of transforming 'silo six pack' into a brewery

Grain silos, bearing Labatt logo to resemble beer cans, are being transformed into a brewery due to open by year’s end. Cutting through the walls – 8 inches of rebar – is no easy

A rendering of the Ferris wheel coming to Buffalo RiverWorks. 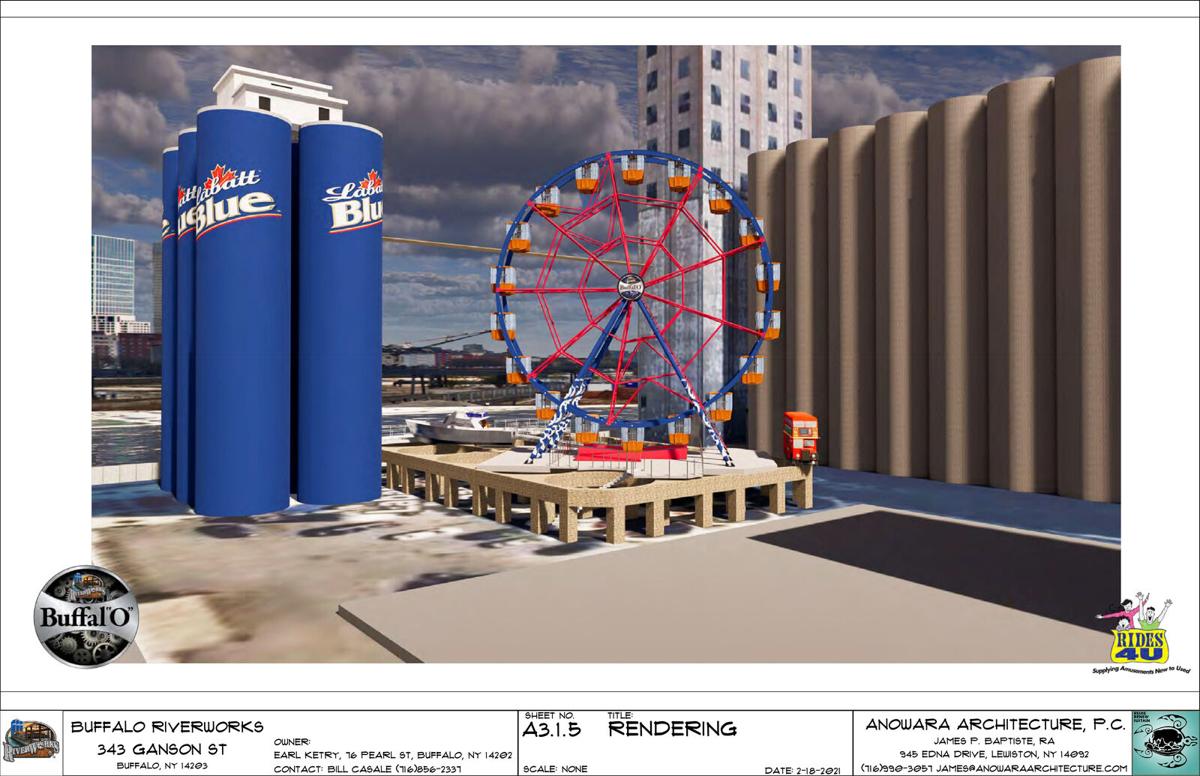 A rendering of RiverWorks Ferris Wheel at the Buffalo RiverWorks site.

Lynn Neeson, left, and her son John, 11, climb the rock wall at RiverWorks.