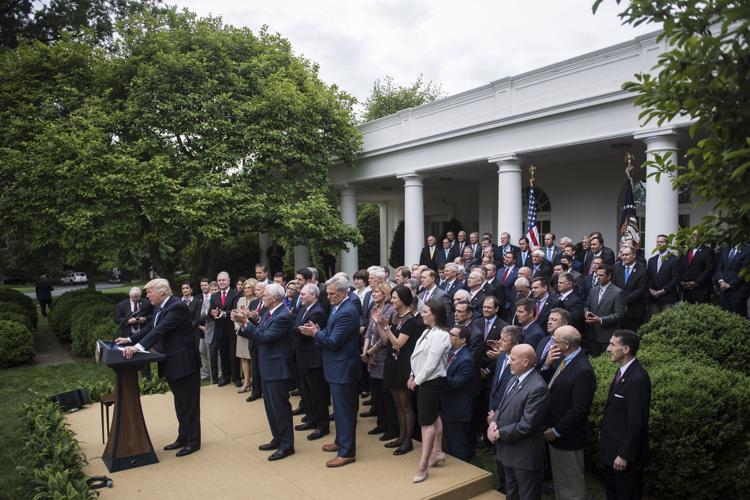 President Trump speaks in the Rose Garden after the House pushed through a health care bill on Thursday. (Washington Post photo by Jabin Botsford) 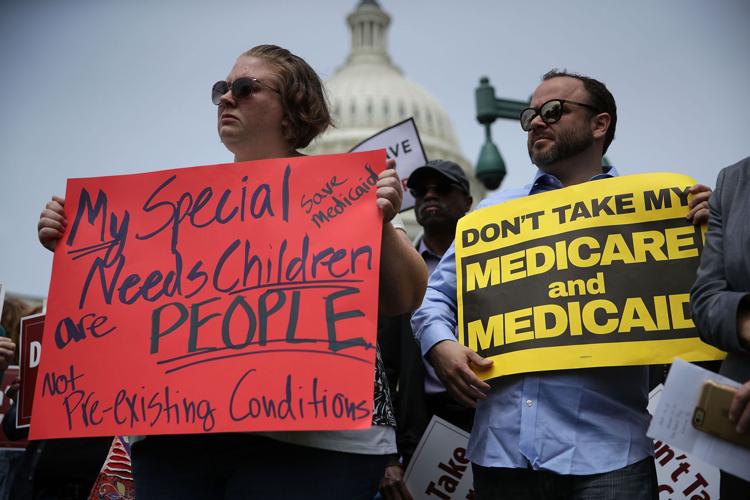 Sen. Bernie Sanders, I-Vt., speaks during a Stop 'Trumpcare' rally May 4, 2017, in front of the Capitol in Washington, D.C. Congressional Democrats joined activists for a rally to urge not to replace Obamacare, also known as the Affordable Care Act. (Photo by Alex Wong/Getty Images)

Support this work for $1 a month
By Jerry Zremski

That's a consensus health experts reached in a deep dive into the complex legislation, which not only aims to cut Medicaid and other key health programs important to the state, but which also contradicts state law in important ways.

"It's a terrible bill for New York," said Bea Grause, president of the Health Care Association of New York State. "It would decimate coverage."

The bill's outlook in the Senate is murky at best. Insurers stressed that nothing in the bill would change anyone's insurance plan anytime soon.

"This is a starting point, not an ending point," said Julie R. Snyder, vice president for corporate relations at Blue Cross Blue Shield of Western New York. "As the bill advances to the Senate, we will continue to support our members – whose coverage remains unchanged in 2017 – while working with lawmakers on needed changes to ensure a stable market in 2020 and beyond."

Grause and other health care experts complained that the bill, if it were to take full effect in three years as planned, would:

"It's a bad bill for many reasons," said Nancy H. Nielsen, senior associate dean for health policy at the University at Buffalo Medical School and a former president of the American Medical Association, which also opposes the bill.

Republicans, including those who represent Western New York in Congress, disagreed. They said the bill – the American Health Care Act – would undo the damage they see resulting from Obamacare.

"We are finally on the path to fixing our broke and broken health care system," said Rep. Tom Reed, R-Corning.

Rep. Chris Collins, R-Clarence, stressed the importance of the amendment to the bill that he and Rep. John Faso, R-Kinderhook, got added to the measure: A provision that bars states from charging counties for a share of Medicaid costs.

“My common sense proposal will fix the finances of counties across New York for decades to come and most importantly keep money in the pockets of hardworking Western New Yorkers,” Collins, former Erie County executive, said, adding that his amendment "simply shifts costs back to where they belong."

But Gov. Andrew M. Cuomo sees the Collins-Faso amendment as a $2.3 billion annual bill being sent to Albany.

According to projections by the Empire Center, a fiscally conservative think tank in Albany, the total amount of additional costs going to state government would be in excess of $7 billion.

"Sadly, some representatives in New York have sold their vote and turned their backs on the very constituents they represent," Cuomo said, after the House vote on Thursday.

The state would have to find $2.3 billion annually that the counties now contribute to Medicaid. Bill Hammond, health policy director for the Empire Center, projected that another big change in the bill would cost the state's Medicaid program another $2 billion annually.

That's because the bill would eventually phase out the provision in Obamacare that gave states federal money to expand their Medicaid programs to serve people who earn up to 138 percent of the poverty level. The state would either have to pick up that additional $2 billion or scale back its Medicaid program.

On top of that, the federal health bill caps the growth of federal spending on Medicaid – a move that could push even more costs onto the state.

"Changes in Medicaid that are proposed in this bill should concern everyone, including those with a family member in a long-term care facility," where many people get Medicaid, Nielson said. "It simply cost-shifts responsibility from the federal government to the states."

"It's a massive cut to New York, and it will have a major impact on the elderly population," he said.

The bill's Medicaid cuts also pose concerns for the 12,000 Western New Yorkers with developmental disabilities who get services from People Inc., which gets 90 percent of its funding from Medicaid.

"Everything we do is tied to Medicaid," said Kevin Horrigan, associate vice president for public affairs at People Inc. "We're very concerned."

Collins, for one, isn't worried.

The GOP bill eliminates federal funding for the state's Essential Health Plan, which serves more than 19,000 people in Erie and Niagara counties alone.

New York was one of two states – with Minnesota – that picked up Obamacare's option to start such a plan. Aimed at lower- and middle-income people who earn too much to get Medicaid and can't get health care through their employers, the Essential Plan offers comprehensive benefits for no more than $20 a month, all because it is heavily subsidized.

But the $3 billion federal subsidy the state gets annually to run its Essential Plan would disappear under the GOP health bill. That means the state would either have find another $3 billion a year to continue the plan, or simply allow the people on it to find their own insurance or go without.

That provision cutting the Essential Plan, like most others that affect New York, was in both the original GOP health plan that the party pulled from a House vote in March and the amended version that passed Thursday.

Republicans won votes for the measure by adding a provision that would allow states to seek a federal waiver to weaken their insurance requirements to allow plans to charge more to people with pre-existing medical conditions.

None of the people interviewed for this story expected New York to seek such a waiver.

Still, "recent amendments to the House Republican health plan ... have done little to improve it from New York’s point of view," Hammond wrote, in a blog post this week.

State law bars insurers from charging older people more for insurance, but the subsidies in the bill are based on age and not need, as they were under Obamacare. That means that older people may actually get greater subsidies than they need in New York, whereas young people with low incomes may be shortchanged on the federal subsidies.

"It's awkward, to say the least," Hammond said.

And that's just one way in which the House GOP comports awkwardly with state law. There's also the provision in the House bill that bars people from using federal subsidies to buy insurance policies covering abortion – which policies are required by law to cover in New York.

"I'm not really sure how that would work out," said Michelle Casey, president and CEO of Planned Parenthood of Central and Western New York.

Casey said that means many of the agency's patients could end up going without the family planning care they need.

In light of the changes under the GOP bill, Democrats vowed to keep fighting it.

“This bill is going nowhere fast in the United States Senate," said Senate Minority Leader Charles E. Schumer, D-N.Y. "Rather than trying to pass a different version of the same Trumpcare bill that would mean higher costs and less care, Senate Republicans should refuse to follow their House colleagues over a cliff, reject repeal, and work with Democrats to improve our health care system in a bipartisan way.”

Sen. Kirsten E. Gillibrand, D-N.Y., also voiced her opposition to the GOP health bill, saying it only benefits insurance companies. The bill "is atrocious and must be defeated in the Senate," she said.

Given likely unanimous opposition from Democrats and Independents in the Senate, the Republican majority there can afford to lose no more than two GOP votes for a health bill to pass.

But Collins predicted that Senate Republicans will stick together and pass a health bill similar to the one passed in the House.

"They made the same promise to America that we did: to repeal and replace Obamacare," Collins noted.

Analysis: Why Republicans were in such a hurry on health care

Buffalo and surrounding communities appear to have emerged virtually unscathed from the 3.8 magnitude earthquake that struck Erie County on Mo…

Orchard Park gym owner Robert F. Dinero was found guilty of trespassing at Orchard Park Middle School after being told he was not allowed in t…

Learn more about the secret language chimps use to communicate

President Trump speaks in the Rose Garden after the House pushed through a health care bill on Thursday. (Washington Post photo by Jabin Botsford)

Sen. Bernie Sanders, I-Vt., speaks during a Stop 'Trumpcare' rally May 4, 2017, in front of the Capitol in Washington, D.C. Congressional Democrats joined activists for a rally to urge not to replace Obamacare, also known as the Affordable Care Act. (Photo by Alex Wong/Getty Images)