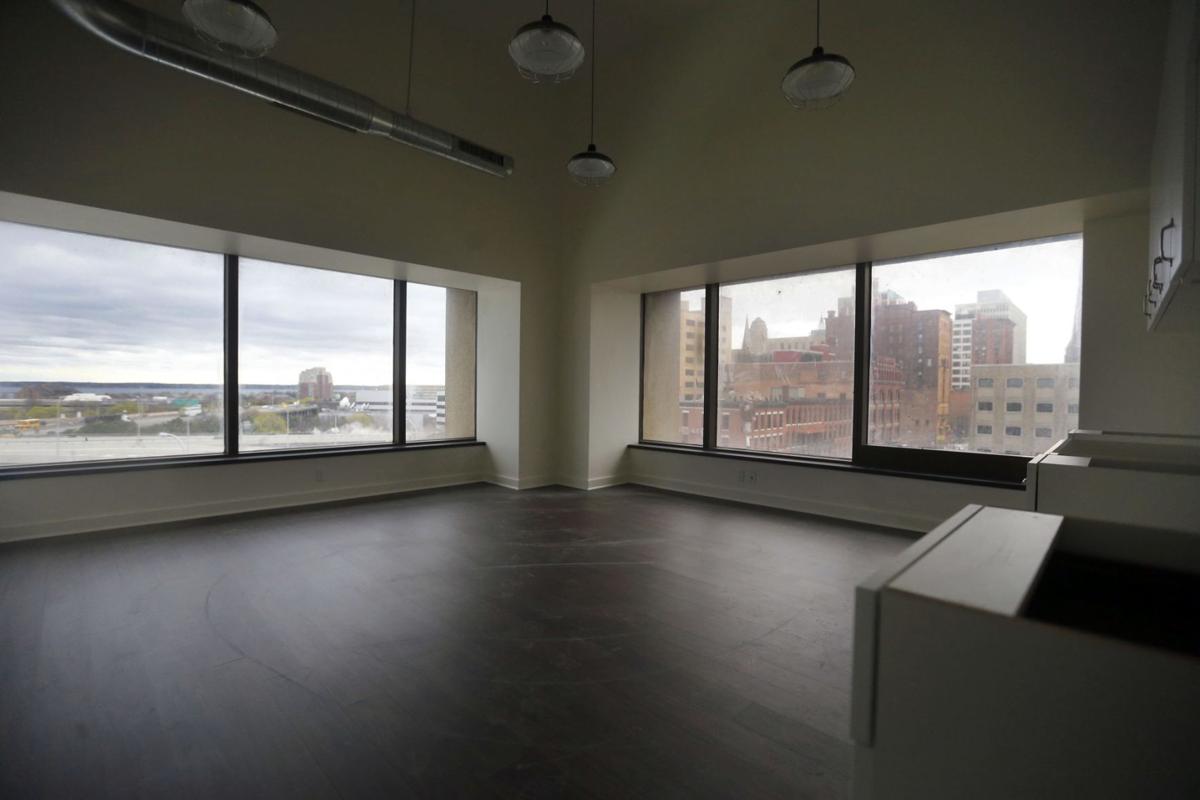 The view from one of the renovated units on the third floor at One Seneca Tower in Buffalo Tuesday , May 14, 2019. (Mark Mulville/Buffalo News) 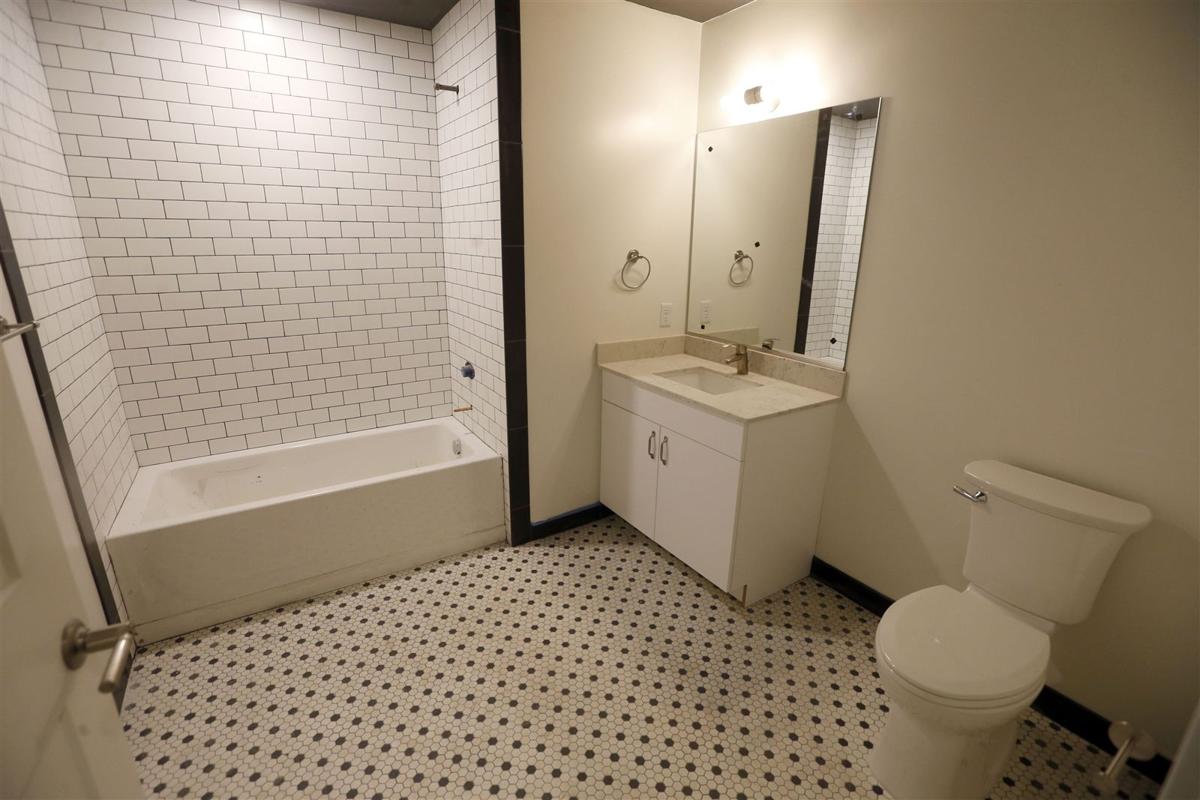 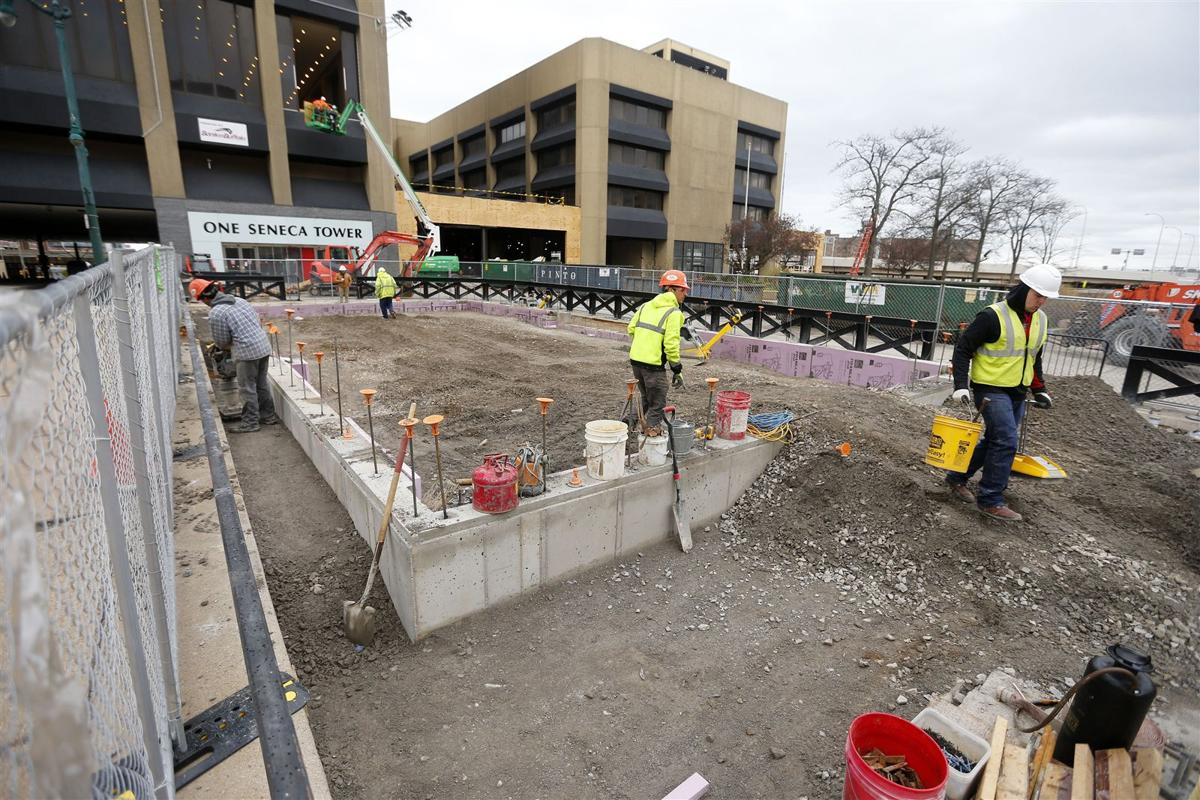 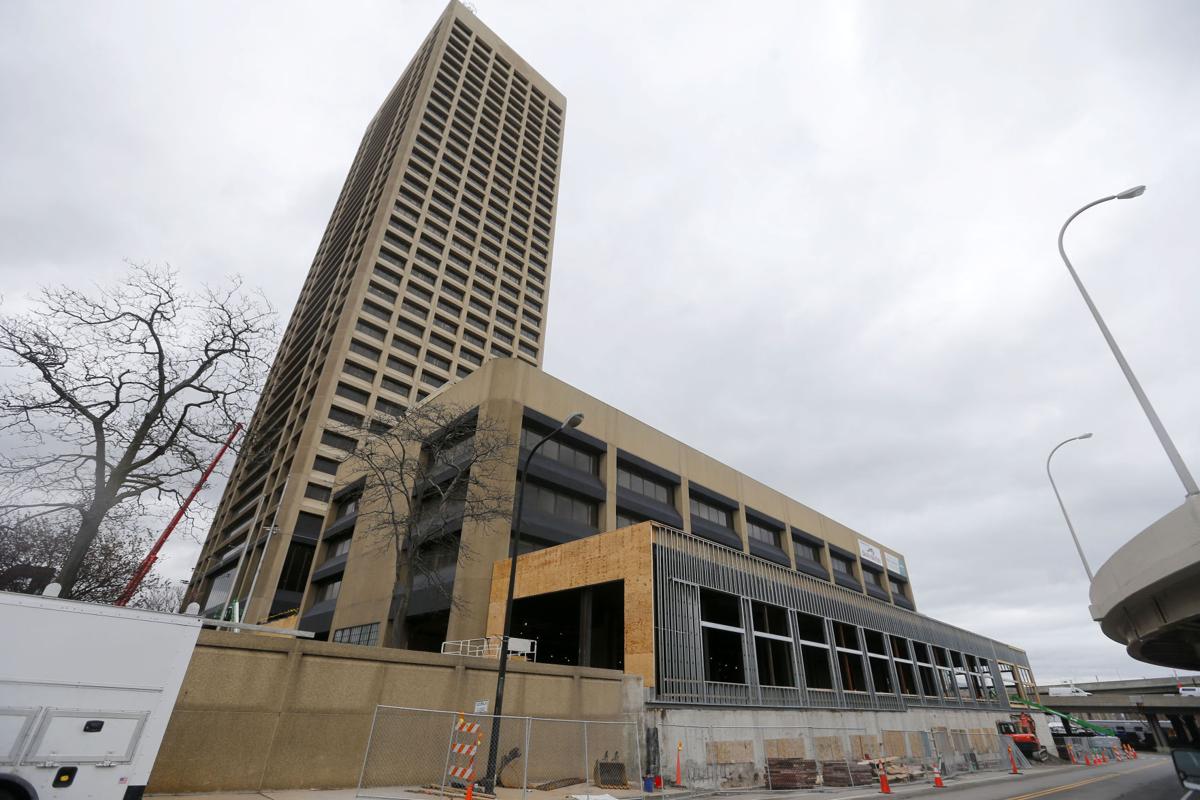 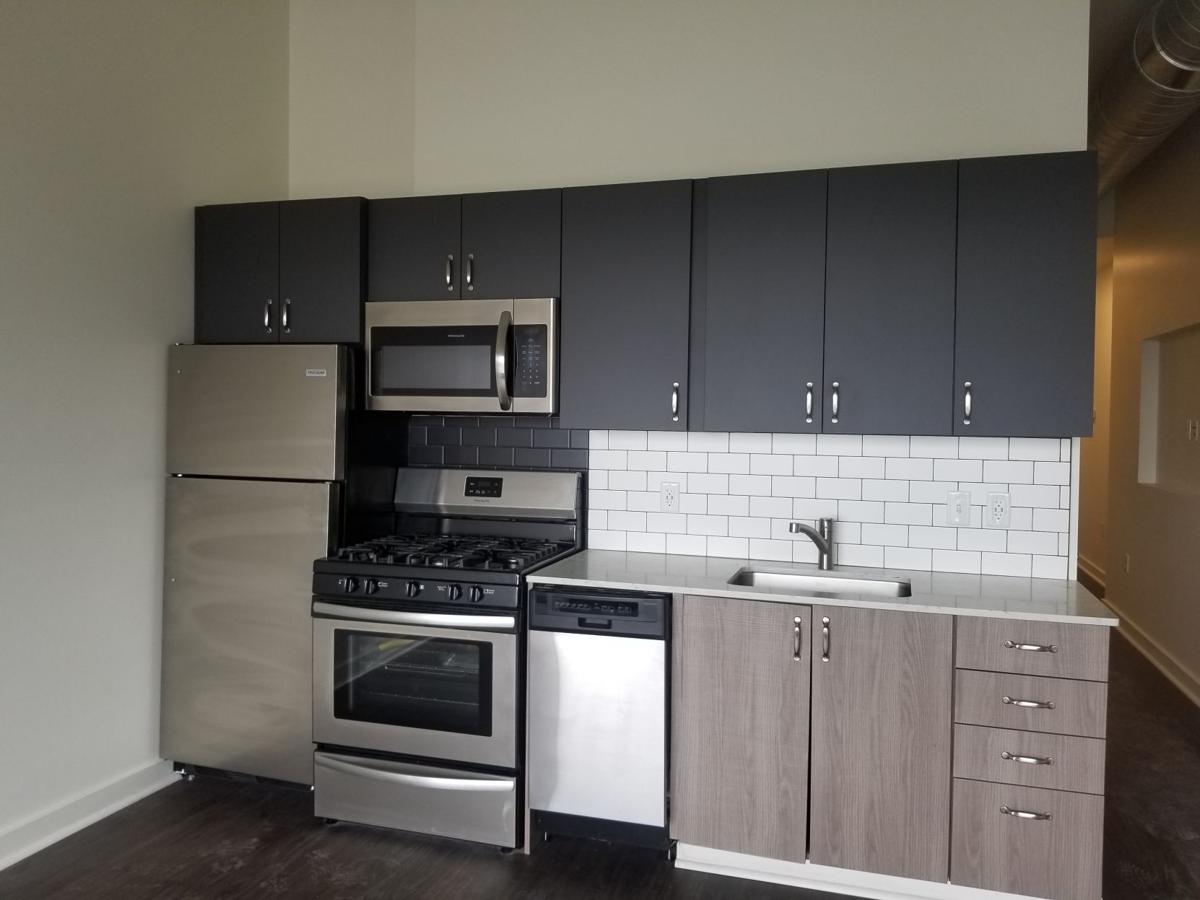 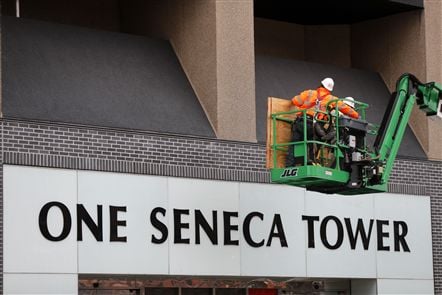 Jemal's plan now includes a new bar and outside courtyard area on the exterior plaza along Seneca Street, a transformation of the tower lobby, and another proposed addition on the south side along Upper Terrace.

His goal is to revive the lower levels of the 1.2-million-square-foot complex – including the plaza and two four-story annex buildings – before tackling the empty tower itself. Jemal said he hopes to make it into a technology-focused building.

Jemal already has built 115 apartments on two floors of the base, installed two black-clad retail structures on the plaza, along with landscaped gardens, and the construction of two additions that will link the West Annex to both the tower and to Pearl Street while also adding 110,000 square feet of commercial space.

The Washington, D.C.-based developer is focusing on opening up the drab and imposing building by providing a more welcome and comfortable environment for tenants, workers, visitors and pedestrians.

"This generation, when they get off work, they’re starving for that interaction," he said. "You have all these offices and people working down here. They’d like to go someplace."

In turn, he says, that can make One Seneca into more of a connection between Canalside and downtown Buffalo, instead of a barrier.

"We believe in having a good time and creating a sense of warmth and feeling and people congregating together," Jemal said. "We want this plaza to look alive, and for Main Street to connect to Canalside, and for Seneca One to be the linchpin. We want to see a lively Main Street."

Jemal received city administrative approval last week for one of his proposed changes – a one-story "clubhouse" building at the corner of Main and Seneca, within the bend formed by one of two new curved driveways from Seneca.

Located in front of the tower, the 1,700-square-foot building would include a bar, a large stone fireplace, a large-screen television for sporting events or other viewing, and seating areas for guests. A big garage door would open up the bar during warmer weather.

"It's just a hang-out joint that you can stay in 12 months of the year," he said. "It’s going to be a cool bar, a cool place to sit, have a cup of coffee, sit on a couch, watch a sports event."

It would not include food service, although snacks and sandwiches might be available. Jemal said he has not yet decided what to call it, but might select one of the names of the former "steel bars" where Bethlehem Steel workers used to congregate decades ago.

Opposite the clubhouse, on a similar shaped area on the other side of the Main-Seneca intersection, Jemal plans to create an outdoor greenspace with turf and benches. "You want to make this a sense of community, a Seneca One community," he explained.

Inside the tower on the main level, Jemal wants to redo the lobby area to make it more inviting. The former security desk would become a landscaped display area, with nearby seating and other features, while the new security area would be moved against the elevator banks, with turnstiles.

He also envisions a separate bar in a currently dark zone under an overhang that would be connected to the former cafeteria kitchen. That's opposite the building's expansive auditorium, where the developer already has invested in technology and other upgrades.

The new Buffalo-made 1928 Ford Model A car that Jemal purchased in Ohio and raised by crane into the building lobby this week also will be on display, along with an old steel press and other equipment to pay homage to Buffalo's manufacturing history.

And as part of the new office space being created in the lower annex and tower levels, Jemal plans to knock down a wall alongside the escalators, opening the workspace up directly to the rest of the tower. That workspace has been aimed at M&T Bank Corp., which is seeking more than 150,000 square feet of space for its technology division. Jemal said he does not yet have a signed lease, however.

Finally, Jemal is seeking Buffalo Planning Board approval on Monday for an 8,300-square-foot, single-story addition along Upper Terrace, which would tie in with the south side of the Annex buildings. That would extend a one-story western addition that was already approved last year along the Pearl Street side of the plaza, allowing a set of facade improvements along Pearl and down to the sidewalk to wrap around onto Upper Terrace.

It would replace the solid precast concrete slab wall with a gray brick and glass facade, while also replacing the overhead doors and mechanical louvers with new finishes to match the new walls. No work is planned for the lower garage levels.

The interior of the addition would include a new 5,989-square-foot commercial office section, as well as a 1,799-square-foot "residential amenity" space and a new entrance for the residential apartments just inside the annex buildings.

"The amended plans will continue to promote pedestrian activity and promote greater overall integration of the site," wrote Jon Pierowicz, an attorney at Phillips Lytle, in a letter accompanying the Planning Board filing. "The new facade design uses materials and pacing that are more human in scale and will display a new face for the site as visitors approach from Canalside via Pearl or Main Street."

If approved, work would begin by May 22, with demolition finished by May 31, steel erected by June 14 and the building frame completed by June 28, according to Trautman Associates, the architects.

Meanwhile, Jemal – who bought the complex in late September 2016 for $12.6 million – continues to work on the other phases of the ongoing project.

The apartments – a mixture of studio, one-bedroom, two-bedroom and three-bedroom units – all offer high ceilings of at least 14 feet and views of downtown Buffalo.

The units are largely completed, but the developer is holding off on opening and leasing them while asbestos cleanup and other work continues. The same is true for the two retail buildings on the plaza, whose shells are also finished and ready for tenants.

"I want to do it right," he said. "There's a lot of construction going on. It's not safe to bring residents into this environment."

He said he expects to be finished with all the current work – including the revamped building lobby and all additions – by October or November.

The view from one of the renovated units on the third floor at One Seneca Tower in Buffalo Tuesday , May 14, 2019. (Mark Mulville/Buffalo News)