Some documentarians spend a lifetime looking for the right story to tell. Then there’s Tarabu Betserai Kirkland: He met his best subject at the moment of his birth.

The arc of his mother’s life tells the story of the African American experience in the 20th century. Granted, it took Kirkland a lifetime to realize. And even when he did understand, it wasn’t easy to get his mother to go along with a movie.

The award-winning result is “100 Years From Mississippi,” a documentary that is playing at film festivals across North America — and this week is coming to Buffalo, where Mamie Kirkland died in 2019 as our oldest citizen, at 111.

The hourlong documentary will be shown at the Buffalo International Film Festival at 1:45 p.m. Sunday at the North Park Theatre. Kirkland will be there for a Q&A. The last time he was in Buffalo was for his mother’s funeral. That was a celebration of her life. So is the movie.

“She was known to a lot of people in Buffalo, sort of like a local celebrity in her older age,” Kirkland says. “But nobody there knows the whole story. That’s because it was something she did not talk about and did not want to revisit.”

Mamie Lang was born in Mississippi in 1908. She was 7 when her family fled the small town of Ellisville because her father knew he was going to be lynched if he stayed another day. The family moved first to East St. Louis, Ill., and later to Alliance, Ohio, where Mamie met a handsome man named Albert Kirkland.

She married him, and they moved to Buffalo. She didn’t want to come here at first — and then she never left. Albert, her steelworker husband, died young, and she raised her family by selling Avon cosmetics door to door. She gave birth to nine children, and today her direct descendants number more than 150.

Hers is an American story of resilience amid the horror of racial terrorism, and of forgiveness of the unforgivable. Moviegoers will see her as a beacon of light in a story of harrowing darkness.

When Tarabu Kirkland was growing up in Buffalo, he often heard about how his maternal grandfather had fled Ellisville with another man who was also about to be lynched. That man, John Hartfield, returned to Mississippi four years later — and died by lynching. “I heard the story so many times,” Kirkland says, “that I didn’t really know if it was fact or folklore.”

Then, while working on the film, he discovered a front-page article in the Mississippi Daily News from 1919 about how Hartfield was to be lynched later that day.

“That’s when I knew it was fact,” Kirkland says. “I thought, ‘Not only is this real, but here is an advertisement for this man’s murder.’ ”

More research revealed that Hartfield was hanged from a gum tree while 10,000 people watched. Then his corpse was hit with a hailstorm of bullets. He was cut down and burned. Souvenir hunters stole body parts.

Kirkland knew that his grandfather could have met the same fate, and he decided Hartfield’s murder would form the framework for his documentary. That’s when he asked his mother to return to the scene of the crime.

She had not been back to Mississippi since leaving a century earlier. She had always said she would never go back. “I don’t even want to see it on a map,” she would say.

But Kirkland told his mother he was going with her or without her — for the sake of the film, and of history. And at long last she changed her mind. Ever the good mother, she said she simply could not let him go there alone.

They went to Ellisville in 2015. She had left at age 7 and returned at 107. Kirkland’s cameras captured it all. And the beauty of Mamie’s story is that she lived through the horrors of her age and somehow transcended them.

“A lot of people go through trauma — wars and other catastrophes,” Kirkland says. “We know a lot about what trauma is now, and we have to treat it. That didn’t happen in the Deep South when people were fleeing for their lives. There was no concept then that a person needed to unburden themselves of this experience. They just had to go on with their lives.

“Some did, some didn’t. I don’t know if I could have done that and still been loving and compassionate and open. My mother did that. That’s a triumph of the human spirit, I think. She managed through her faith and spiritual practices to attain a level of peace and forgiveness. Nobody can do that for you; she did the work. And as she grew spiritually, she exuded this light and transcendence that people are drawn to.”

That inner light offers balance to the darkest moments of the movie. Kirkland discovered this on the fly, as the cameras rolled.

“You never know, when you start a film, where it is going to go,” he says. “You have a premise, you have an idea, you have an outline. And then the story comes out the way stories do. They reveal themselves.”

Kirkland is a graduate of Hamlin Park Academy Public School No. 74, on Buffalo’s East Side, and of Bennett High School, where he ran track. He was the first president of the Afro-American Society at Canisius College, and his Class of 1971 recently celebrated its 50th reunion.

“I live in Los Angeles now, but Buffalo is still my home,” he says. “Always will be.”

Funny thing is, Kirkland didn’t have a documentary in mind when he started collecting footage of his mother. He thought of it as something nice to have for the family. But then he began to connect her story to the larger story of the Great Migration. That’s the term historians give to the movement of some six million African Americans from the Deep South to northern states beginning at around the time his mother left Mississippi in 1915.

“Many of those families left because of segregation and racial terrorism in the extreme,” Kirkland says. “I think at some point I began to see how her story connected to all of those other stories.”

It took some convincing, but soon she saw it, too.

Bryan Stevenson, executive director of the Equal Justice Initiative, a human-rights advocacy group, appears in the documentary and says this of Mamie: “She can articulate every aspect of what it means to be a human being who has survived terrorism and segregation and bigotry and bias — and yet has this hope, this joy, this love, this light.”

If you can’t be at the North Park Theatre on Sunday, watch for the movie on streaming services in February. The camera loves her. You will, too.

“There are very few left who witnessed all of these things,” Kirkland says. “And she was still sharp enough at her age to tell it. That’s pretty amazing. And then the older she got, I began to think, ‘Is she going to live forever?’”

She died at 111 years, 3 months and 25 days. Her passing is noted near the end of the film with these words in white letters on a black backdrop: “On December 26, 2019, we showed Mamie Kirkland one of the final cuts of the movie. Two days later, she passed away in my arms.”

The Equal Justice Initiative honored Mamie Kirkland at its annual dinner in New York in 2016. On the documentary you can see her addressing the dressed-to-the-nines crowd: “I left Mississippi a scared little girl of 7 years old. Now I’m 107, and I’m not frightened anymore.”

Then, in 2018, she attended the opening of the group’s Legacy Museum in Montgomery, Ala. It is on the site of a former warehouse where enslaved Black people were imprisoned. One of the permanent installations there tells her story.

Mamie’s life is memorialized in a museum, and celebrated in her son’s film. She belonged to Buffalo for nearly a century. She belongs to America now.

10 local centenarians share their secrets to a long life

Ten African-American women in the Buffalo Niagara region contributed their unique stories to “The Centenarians: We Have a Story to Tell,” a living history project. All have lived at least 100 years. Here, meet the 10 women and see to what they credit their long, full lives. [Centenarians share their stories of faith, humor and grit] — Irene Breckenridge,

Centenarian cherishes her right to vote

Mamie Kirkland rarely misses the chance to cast her ballot. ‘People died so I can vote,’ she

The East Delavan Avenue resident has lived in Buffalo for 90 years, and on Saturday she celebrated her upcoming 105th birthday with a party in Schiller Park Senior Center on Genesee Street. She turns 105 on 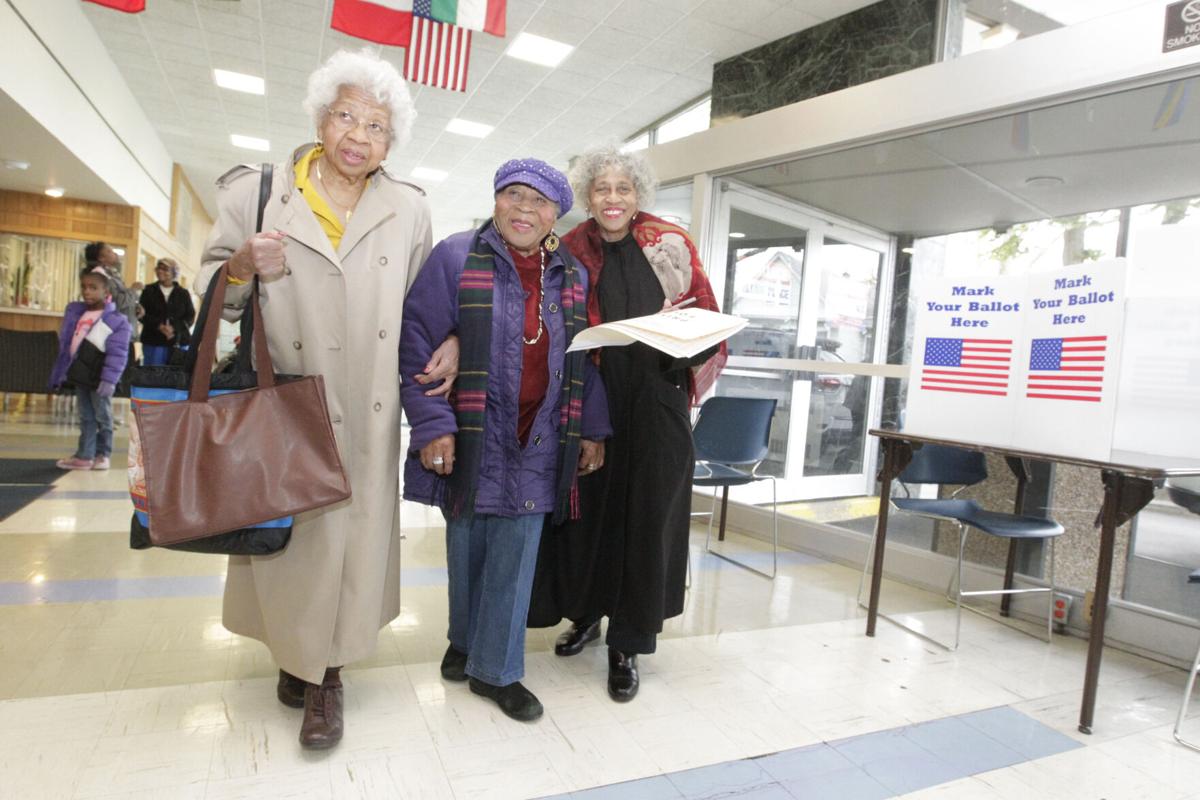 Mamie Kirkland, at age 106, center, goes to vote with her daughter Jeanette Clinton, right, and Juanita Hunter, left, in 2014. 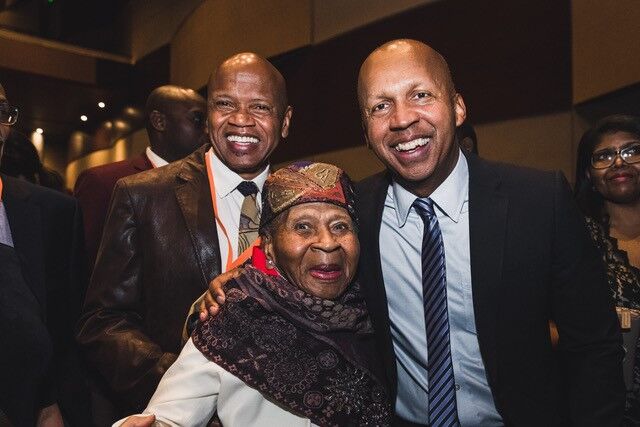 Mamie Kirkland with her son, Tarabu Betserai Kirkland, and Bryan Stevenson at the opening of the Legacy Museum in Montgomery, Ala. 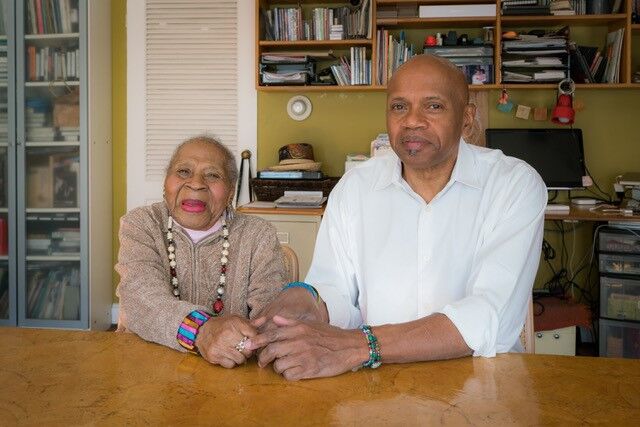 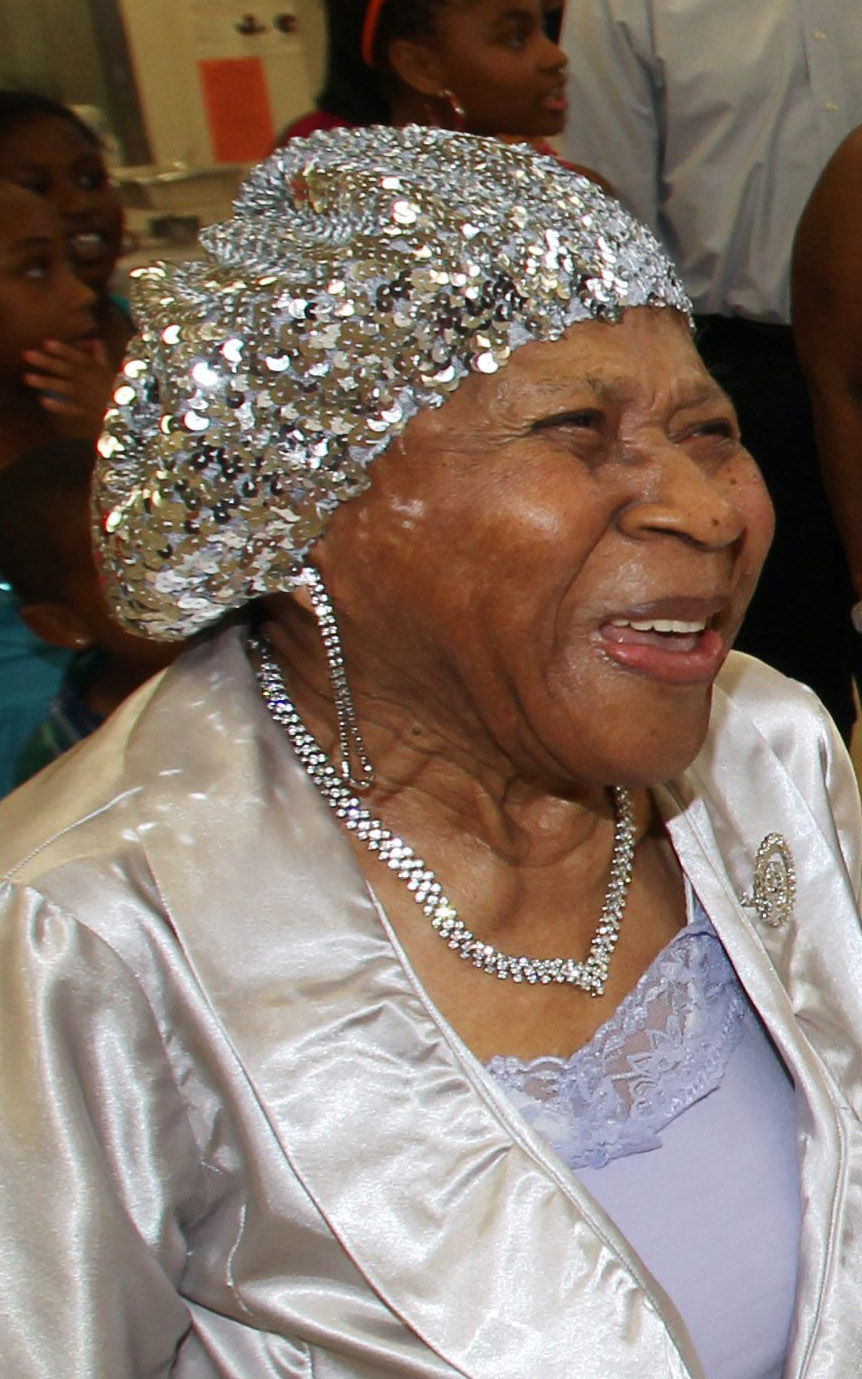