Subscribe for $1
Read Today's E-Edition
Share This
Erik Brady: Dome or open-air stadium? The argument that never ends
0 Comments
Share this
Support this work for $1 a month
Erik Brady

Jean-Baptiste Alphonse Karr, the French critic and novelist, offered that aphorism nearly 175 years ago. “The more things change, the more they stay the same.”

And if you have followed Erie County’s endless back-and-forth over where to put a football stadium — suburb or city — and what kind of stadium it ought to be — domed or open-air — well, then you know that Monsieur Karr was correct.

In the most recent round, the answer is the same one we arrived at the last time: open-air, in Orchard Park, with public money. (Sort of like Colonel Mustard, in the library, with a lead pipe.)

This time the argument was effectively over before it began. Last time, things were far different. The argument then was between a domed stadium in Lancaster or an open-air one downtown. In the end, of course, we got a mashup: suburb, yes; dome, no.

As it happens, this weekend the Class of 1972 at Canisius High School will celebrate 50 years since our graduation. Today I’ll be taking a ride up to Buffalo from northern Virginia with a classmate, Pat Cavanagh.

We met as freshmen in homeroom 1F. I’m from Ken-Ton. He’s from Lancaster. And one day we had a formal debate, in front of the class, on where a new stadium for the Buffalo Bills should go.

Our classroom debate was simple. The real-life debate, of course, was anything but. First, Erie County agreed to build a domed stadium in Lancaster on land owned by a developer, Ed Cottrell. But what followed instead was a courtroom saga that lasted for two decades, through multiple lawsuits.

All that, of course, was still years in the future as Pat and I made our arguments in class. I have only recently come to know the rest of the story: Pat’s father was general manager of Lancaster Ford, one of three Ford dealerships that Ed Cottrell owned in Western New York.

“I was for the dome,” Pat says now, “because I had a financial interest.”

(The county backed out of building the domed stadium when the cost came in too high, and it built what is now Highmark Stadium, in Orchard Park. Cottrell sued for $495 million for breach of contract. A jury awarded $64 million, and an appeals court reduced that to $6.1 million.)

An internal study conducted a few years ago by Pegula Sports and Entertainment put it this way: “No roof. Outdoor football.” Sounds a bit like my doctored wording, doesn’t it? I like to think that means I won my debate with Pat. But let’s face it: I didn’t get that city location — then or now. And Pat has a convincing argument on his side, too.

He is the owner of a roofing business in northern Virginia. His company put a roof on my daughter’s house some years back. And now, come to think of it, the house where my wife and I raised our kids (and where we still live) is going to need a new roof soon.

When Pat puts a new dome on my domicile, I will, at long last, have to concede:

U.S./Canada travel is not bouncing back. And officials on both sides of the border are worried

"At a time when most people are getting back to a semblance of normality, the border communities in the U.S. and Canada are not nearly where they should be," said Rep. Brian Higgins, D-Buffalo. "This is the beginning of the travel season for 2022 and we still have all this redundancy and obstacles that we need to get rid of."

A Buffalo pediatrician and two of his daughters died in an overnight fire in North Buffalo, according to the Buffalo Fire Department. The mother injured in the Huntington Avenue fire was taken by ambulance to Erie County Medical Center. She was listed in serious condition.

Two Grand Island residents have had enough of putting up with a bar overlooking the Niagara River near their homes, where they say the patrons are boisterous, raucous and loud and frequently use foul language and display lewd behavior.

Former Canisius College athletes can proceed with lawsuit: 'Culture on the team was so toxic'

Three former Canisius College track and field athletes can proceed with their sex discrimination and retaliation lawsuit against the college, a federal judge has ruled, but most of their claims against the team's coach and also the college's athletic director were dismissed.

Louis Ciminelli could be released in wake of Supreme Court decision

Louis P. Ciminelli and others imprisoned in the "Buffalo Billion" case could be released from custody soon if the judge who presided over their trial agrees that should happen in light of the Supreme Court's decision to hear their appeals.

'He touched thousands and thousands of lives': Dr. Jonathan Daniels remembered as caring to peers, patients

Tributes came pouring in after pediatrician Dr. Jonathan D. Daniels, 53, and two of his daughters, Jordan A., 27, and Jensen A., 23, died Monday in a fire at their Huntington Avenue home. 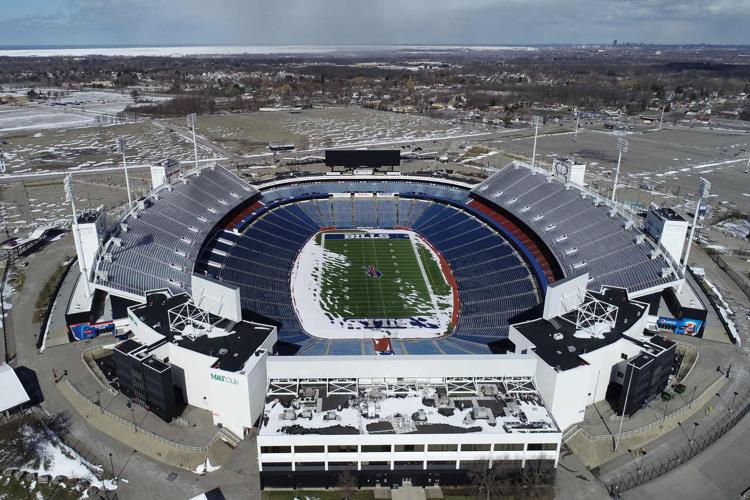 An aerial view of Highmark Stadium in Orchard Park.