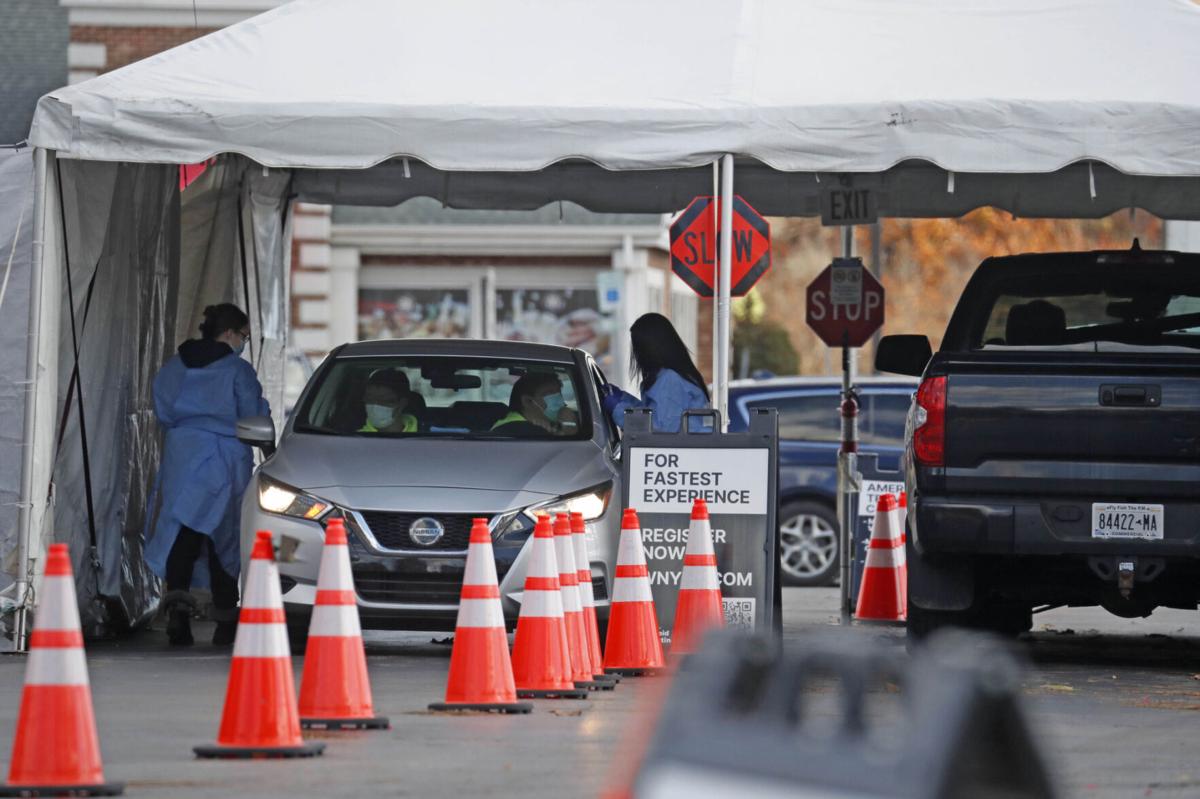 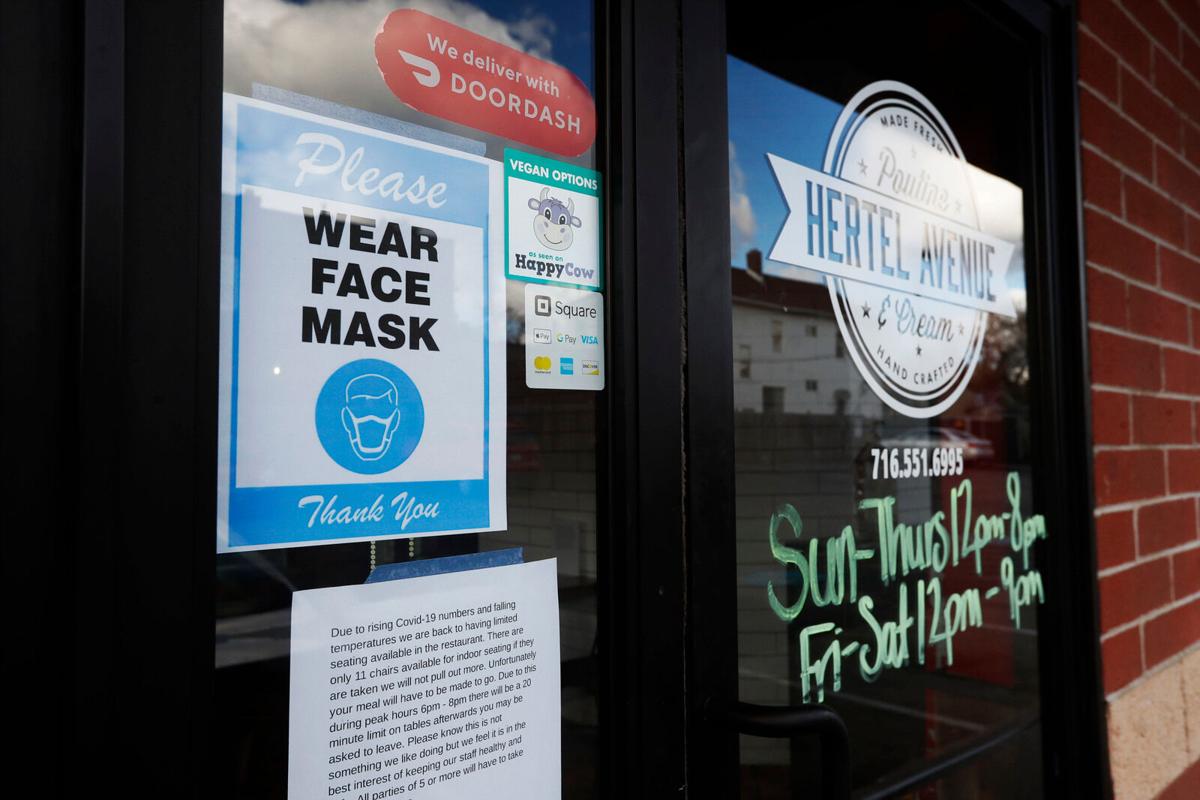 There are signs at business requiring masks to be worn by all. A sign is displayed at Hertel avenue Poutine & Cream, Tuesday, Nov. 23, 2021.

An all-time worst record for Covid-19 was reached Tuesday.

The number of positive cases and hospitalizations has steadily risen over the last month, prompting Poloncarz to reinstate a mask mandate this week for restaurants, bars, grocery stores and other establishments.

"This is not the Thanksgiving we thought it would be," Poloncarz said as he again pleaded with people to wear masks, get vaccinated and stay home if they are sick.

The positivity rate was 11%, and the 4,693 cases over the last week was also a record number over a seven-day period.

"I wish I had better news, but, unfortunately, we are going in the wrong direction," Poloncarz said. "This is the worst direction we've ever had."

Poloncarz said the spike over the last few weeks has touched all areas of the county, with 28 ZIP codes having 450 cases or more.

"If these rates continue, we will get into an uncontrolled phase that we may not be able to control and stop the further spread unless we have some serious actions taken, including shutdowns, and nobody wants to do it," Poloncarz said.

"I have no interest in doing that. But these numbers are just bonkers, they're just ridiculous," he said.

The county executive also sounded off against other county leaders in Western New York "for acting reckless by not implementing appropriate standards."

The 'new stage' of the pandemic: Explaining WNY's winter surge and living with the virus

“Normal” now and in the immediate future, health experts say, will likely still include some level of ongoing, fluctuating precautions as communities react to Covid-19 surges.

He noted Covid-19 rates in some counties are worse than in Erie County.

"If they want to talk about their freedom, they can have their freedom to die and let their constituents die, but I think it is reckless, whether it is Allegany, Genesee, Niagara or Wyoming. They should be acting to protect their public," Poloncarz said.

That drew a swift reaction from Niagara County Legislature Chairwoman Becky Wydysh, who said she believed wide availability of free testing – and not mandates – was needed to curb the spread of Covid-19.

"It's truly disappointing that Mark Poloncarz would choose to call Niagara County 'reckless' over a policy difference on how best to handle the increase in Covid-19 cases across the region," Wydysh said in a statement. "We have no interest in turning this into a political hot potato between neighboring counties."

Erie County "has the resources to offer free testing to its residents and Canadian citizens, but is excluding Niagara County residents from such testing," she said.

Hospitals are close to capacity, and if Covid-19 hospitalizations continue, Erie County may have to order that all elective surgeries be canceled or postponed, Poloncarz said. Another concern: Wait times at local emergency rooms in hospitals are growing longer, as much as eight to 12 hours for non-life-threatening issues.

The past two weeks have seen hospital beds with Covid-19 patients increase by 55 percent, with 365 people hospitalized Tuesday.

Forty of the 56 people in the ICU on Tuesday weren't vaccinated, as well as 22 of the 31 people requiring airway assistance.

Some 90% of hospital beds are occupied, including nearly 86% of ICU beds.

"We cannot let our hospitals get overrun. It's as simple as that," Poloncarz said.

The reason for the increase in Covid-19 is the 29% of county residents who are not fully vaccinated, including about 25% who have not had a single dose, Poloncarz said. The unvaccinated make up 61% of people testing positive and being hospitalized for the coronavirus.

"This is what is driving our problems," Poloncarz said. "There is one out of four adults who have not received a single dose, and some of them are very proud that they haven't. Well, they are the ones who are driving this problem."

Poloncarz hopes people will keep the numbers of unvaccinated in mind when they're in social situations.

"When you are in a room with 40 adults, 10 of them, in all likelihood, on average, probably haven't gotten even a single dose," he warned.

"If you are unvaccinated, your odds of dying are so much higher, and we are losing people in the prime of their life because they were not vaccinated," he said.

He said he will revisit his mask mandate on Dec. 13 and hopes he won't have to implement tougher requirements. A decision to do so, he said, would be made only after consultation with the county Health Department, Department of Homeland Security, hospitals, business leaders and others.

Poloncarz expressed concern that people could pack into bars Wednesday night on what he said was the busiest bar night of the year. He also expressed concern about the impact Thanksgiving gatherings could have on the disease's spread.

He reiterated again that Covid-19 doesn't have to get worse if the public gets vaccinated and wears a mask.

"I just want people to understand it really is in the public's hands," he said.

Poloncarz's ability to mandate changes isn't sitting well with four Republicans in the Erie County Legislature, who on Tuesday introduced a resolution urging the Western New York delegation to the State Senate and Assembly to revoke Poloncarz's emergency powers.

The resolution in the Democratic-controlled branches has little chance of success.

'We’re doing everything we can,' WNY hospitals say amid Covid surge, capacity crunch

If things get much worse, Erie County Executive Mark Poloncarz warned Wednesday, the county may have to order all elective surgeries canceled or postponed at the area's hospitals.

Canadian border agents are randomly handing take-home testing kits to people arriving at border crossings and airports – and requiring that they take that Covid test on video with a nurse on the other end of a computer connection.

There are signs at business requiring masks to be worn by all. A sign is displayed at Hertel avenue Poutine & Cream, Tuesday, Nov. 23, 2021.